Earlier this season during the Lucas Oil Off Road Racing Series (LOORRS) first visit to Speedworld Off Road Park, short course phenom Corey Sisler wowed the crowd by crossing the finish line on fire to reach the podium in Pro Lite Unlimited.  In last weekend’s return to Speedworld, the grandstands were on fire as the crowd braved triple-digit heat in order to watch short course racing’s fastest racers.  Sisler got off to a great start, second quickest out of twelve racers on Friday’s practice with the newly applied AEM Performance Electronics logos gracing the side of his No. 19 Pro Lite Unlimited truck. 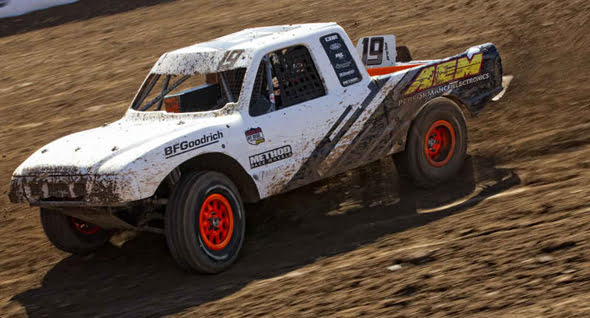 Corey’s strong qualifying run put him on the second row for Saturday’s race; important on a track that offered very few passing lines.  Sisler was out front early and lead the race for the first two laps before Brian Deegan slipped by in Turn 4.  Three laps later Corey pulled out all the stops and made a clean pass on Brian Deegan, diving low on Turn 2 during Lap 5.  Corey held off the competition through the mandatory caution, but a partial transmission failure in Turn 5 limited Sisler’s gear selection.  This heartbreaking carnage left Corey watching the whole field pass by, taking his chances at his first victory in Pro Lite with them. 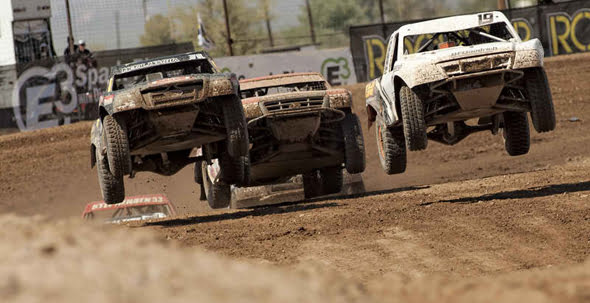 Corey started at the middle of the pack on Sunday, meaning he would have to really be on his game to pass the veteran drivers starting in front of him.  While the leaders bumped and banged, Corey patiently waited for the competition to make mistakes that he could capitalize on, picking them off one by one.  He had moved the No. 19 AEM Performance Electronics truck up to fourth place the first half of the race, but then he was spun after hard contact from another driver on Turn 6 with only four laps remaining.  Lesser competitors would have thrown in the towel at this point, with little time to pass traffic more seasoned racers on the tight course at Speedworld.

Instead of making excuses, Corey Sisler went to work like a surgeon with a scalpel, carving his way through the competition to move up all the way from ninth place to second in the final two laps of the race.  It was a spectacular comeback on a weekend dominated by vehicles running in the same positions for their entire races.  “My spotter Tony told me that things were going to get crazy but I just tried to keep it clean and drive as fast and hard as I could,” Corey commented after the race.  The action did indeed get crazy as Sisler put the No. 19 AEM Performance Electronics truck four wide to pass most of the field on the front straightaway, bringing the crowd to its feet.  Corey cut Deegan’s lead from ten seconds to under one second by the checkered flag, running out of time to get the win but setting the fast lap for the weekend in the process of finishing second.

The next race for Corey Sisler is at Las Vegas Motor Speedway on November 5th and 6th.  With the stands packed full of industry players from the SEMA show, Vegas would be the perfect setting for Sisler to take home his first Pro Lite Unlimited victory.  Corey was seventh in points coming into Speedworld and his sixth podium finish helped boost his season standings.  Next season Sisler plans to race in LOORRS marquee Pro2 Unlimited, in addition to the ultra-competitive Pro Lite Unlimited class.  Follow all of Corey’s racing exploits via his Twitter page @corey_sisler19 and on his Facebook page at http://www.facebook.com/pages/Corey-Sisler-Racing/111543858928056.