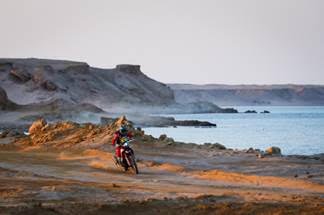 Today was heaven for photographers but hell for the riders and drivers! The seaside played host to the start of the special looping around NEOM where it both started and finished. The contrast between the blue sea and the shores’ shades of brown was striking from an aerial viewpoint. However, the competitors did not have much time to admire the scenery and, beneath their helmets, it was the rocks in the middle of the special or the jumble of tracks at its end that attracted the attention of the riders, drivers and co-pilots. In so doing, Carlos Sainz and Nasser Al Attiyah lost valuable time, while the navigational difficulties played into the hands of Nacho Cornejo, whose talents continue to come to the fore when strategy is of paramount importance. All along the 465 kilometres of the special, the majestic landscapes encouraged calm and the day’s winners were those who grasped this notion. 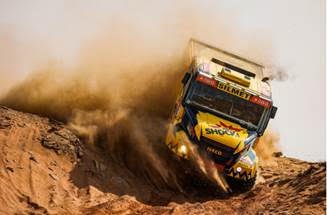 Some surprises are not entirely unexpected. Over the last few days, Nacho Cornejo has displayed his navigational skills, calmly invited himself into the upper reaches of the general standings, taken the lead and gradually opened up a gap on his pursuers, with the clear-headedness to slow down but also ride fast when it is required! The Chilean’s performance pressured Toby Price into being too hasty and the Australian exited the rally after a heavy fall, meaning his team-mate Sam Sunderland is now the only official KTM representative, in third place surrounded by four Honda riders, including title holder Ricky Brabec, hot on his heels and aiming to kick him off the podium to paint it entirely red. In the car category, the ability to take his time also paid dividends for general standings leader Stéphane Peterhansel, who posted the day’s best time and more importantly avoided any setbacks, whilst Nasser Al Attiyah and Carlos Sainz suffered punctures that took their objectives of victory further out of their grasp. Needing to close the gap on his French rival, the Qatari instead lost 12 additional minutes. Though the duel continues between Manuel Andújar and Alexandre Giroud in the quad race, the Argentinean still leads and obtained 15 extra seconds today, on a special dominated by Chilean Giovanni Enrico. Another Chilean, Chaleco López, struck a major blow and returned to the top of the general standings by winning the stage in the lightweight vehicle category. In the truck race, there was a minor revolution, with a stage success for Czech driver Martin Macík. His victory 2’27’’ over Airat Mardeev has not affected the category’s boss, however, as Dmitry Sotnikov continues to lead the general standings as he has done since the rally left Jeddah.

This year, Chaleco López is taking part in his tenth Dakar. With a roll of honour as impressive as his, suffice to say that the Chilean is among the most experienced members of the field in the lightweight vehicle category. Thanks to a win on each of the marathon stages, López had already regained new impetus in the fight for the title. However, he could have easily lost all hope on the sixth special during which he lost almost one hour due to a mechanical problem. Nevertheless, behind the wheel of his Can-Am, he gave his utmost to score three consecutive stage victories. Taking advantage of Seth Quintero’s mechanical mishap and a below-par performance from Austin Jones today, López returned to his place at the top of the general standings with Jones as his nearest pursuer, more than 12 minutes behind. With three days left until the finish in Jeddah, “Chaleco” has a great opportunity to take the title… if he continues in this vein.

Toby Price was looking well set to battle for victory this year with two stage successes already in the bag. The Australian, who was in second place in the general standings at the start of the day, set off at a lightning pace over the first portion of the special. Trailing the leader by 24’’ after 121 km, he then crashed around the 155 km point. His team-mate Sam Sunderland and title holder Ricky Brabec stopped to come to his aid as he awaited the medical team and then Price was airlifted to hospital in Tabuk where he was diagnosed with a fractured collar bone. As a result, the two times winner of the Dakar was force to exit the race prematurely. Before today, it had only happened to him once in his six previous participations in the rally. Apart from these withdrawals, Price has always finished on the final podium, so today sees one of the leading pretenders to the crown bid goodbye to this year’s adventure. 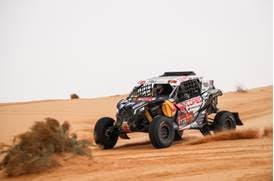 Represented at the top of the standings in two categories out of five on the Dakar, Chile took pride of place today thanks to Chaleco López and Giovanni Enrico, who both won the special in the lightweight vehicle and quad categories respectively. With Chaleco López and Nacho Cornejo, two Chileans occupy first place in the general standings, in the lightweight vehicle and bike categories respectively. Thanks to their wins on stage nine, López and Enrico have increased their country’s number of stage victories to 64 on the Dakar. The only fly in the ointment was the 13th best time achieved by Ignacio Casale, title holder in the quad category, who nonetheless is enjoying an honourable debut in the truck race, with finishes in the top 10 on seven stages out of nine to date. 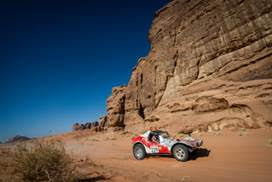 The Volkswagen Iltis driven by Spaniard Ignacio Corcuera dates from 1980 and has been faithfully restored in keeping with the characteristics of the vehicle that won the car category that year, with Freddy Kotulinsky behind the wheel. In the race for consistency taking place this year, he is currently 21st in the Dakar Classic standings, which  are still dominated by Marc Douton in a Sunhill Buggy. 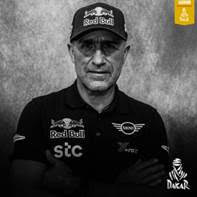 Stéphane Peterhansel: “A real Dakar stage, a little bit like in the past in Africa”

Thanks to his composure, the general standings leader won the stage enabling him to open up a gap at the summit of the rally: he now leads Nasser Al-Attiyah by 17’50’’.

“For sure this stage was a really complicated one. From the beginning we saw that the day would be long, so we decided to not be on full attack but more to manage the tyres and be clean with the navigation. At the end we overtook Carlos and also Nasser. We overtook him two times because he had a puncture. It was a real Dakar stage, a little bit like in the past in Africa, where it was not only a question of speed but it was also a question of strategy, just to adapt the speed to the condition of the tracks. For sure, normally in such conditions I was always not so bad, so it’s still good for me”.