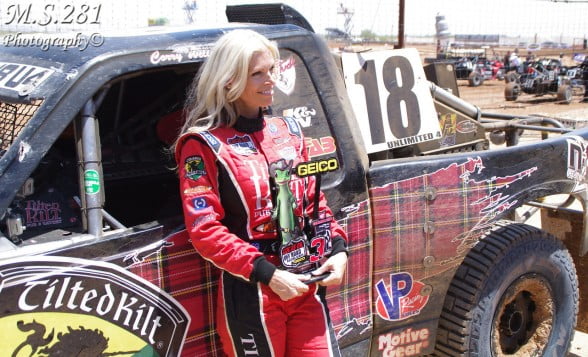 Chandler, AZ (May 22, 2012) If there was a glass ceiling in the world of short-course off-road racing before, there isn’t one any longer after Weller Racing’s Tilted Kilt driver Corry Weller made history once again in the Pro 4 Unlimited class, earning her first podium finish in what was only her fifth race ever in a Pro truck class.

Her third place finish wasn’t handed to her, either – it was a hard fought battle from the drop of the green flag all the way to the checkers in what would be an ultimate test of driver and machine.

Weller started out the weekend with a decent qualifying run, putting her in the fourth row for the start of Saturday’s main.  As the flag dropped and engines roared, Weller surged ahead with the field and headed into battle, and a battle it was, as drivers pushed their trucks to their limits and, for many, beyond.  Due to a number of drivers rolling their trucks, and another one bursting into flames, the race was halted and slowed a number of times throughout the 18 lap main, which resulted in several restarts – which happens to be one of Weller’s strong suits.

“My truck does great on restarts,” explained Weller, “so I don’t mind those so much!  The combination of my Maxxis tires and my Pro-Power Ford motor gives me a ton of low-end traction on restarts, so I can usually pick up a position or two just on the front straight.”

As the race continued, position changes were happening all over the track and the racing action was fast and at times brutal, but when the checkered flag came out, Weller had put her black and red Tilted Kilt-themed Pro 4 on the podium in a hard-fought third place – a first for any female driver in short-course history.

“I definitely had to earn this podium.” Weller said. “The guys I race with are super competitive, and every one is driving just as hard as they can, the entire time.  You can’t let up for a second, because as soon as you do, you will get roosted and passed.  That’s one of the things I have been learning, actually……just how intense the pace is in this class, and I love it.  I love the challenge!” 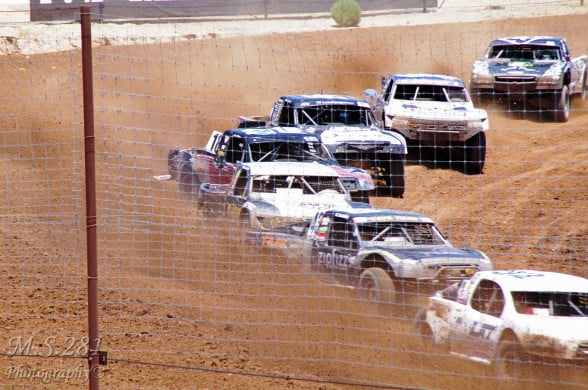 With her first trophy of the 2012 season perched atop her crew chief’s toolbox, Weller headed back out onto the track on Sunday to see if she could put her Tilted Kilt/Maxxis Tires/N-Fab Ford on the box one more time for Round 6 of the Lucas Oil Off Road Racing Series.

Since her podium had bumped her up in overall points to 4th place, she would start on the inside of the second row with the six truck inversion, which put her directly behind the two patriarchs of the Pro 4 class, Curt LeDuc and Jerry Daugherty.

With eyes focused intently on the rear bumpers in front of them, the whole field surged forward at the words “Green! Green! Green!” coming from their spotters, and the entire class went roaring down the front straight.

With the fastest drivers moving up through the pack, Weller focused on driving hard and holding her lines, but as the laps ticked off, Weller got a little sideways on a jump, and even though she swerved at the last second, she still clipped her left rear wheel on the cement k-rail hard enough to start the damage that would ultimately end her race.

Having avoided what could have been a terrible wreck, Weller put her head down and remained focused on pushing her truck as hard as she could.  Sunday was a rough day for many drivers, and attrition began to take its toll on the Pro 4 field as trucks began to be sidelined with mechanical issues.

At the mandatory caution, Weller radioed to her spotter that she was having a tough time getting the truck to rotate, and acceleration was a bit off, but that she would drive it as fast as she could.  Sitting in third place at the halfway point, Weller knew she just had to keep things together and she would be on the box again.

When the green flag dropped for the last time, Weller had her sights set on 2nd place, but as she came around for another lap, she suddenly fell off pace.

“I felt something in the back end let loose just before the whoop section, and that was it.” said Weller. 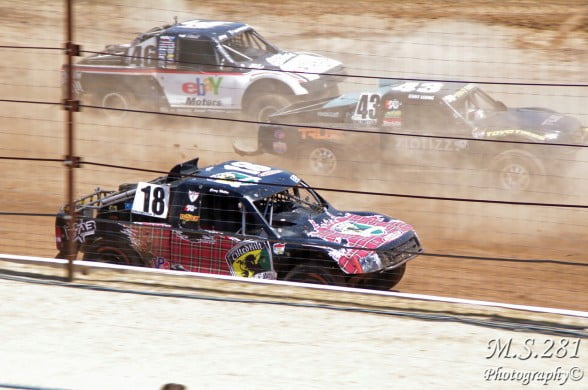 With no way to keep her broken truck going without being a hazard to the other racers, Weller pulled into the hot pits and ended her race in 6th place overall, earning herself some important points towards her goal of “Rookie of the Year”.

“These trucks are tough,” explained Weller, “but we really put them through hell sometimes.  I clipped that k-rail pretty hard when I came out of turn 3 that one time, and probably started the damage that ultimately took us out of this race.”  She added, “I’m happy it held in there as long as it did, because we gained some valuable points this weekend, and that will put us up there pretty good in the overall standings, but I still feel bad any time I cause my crew any extra work.”

With only four weeks until the next race weekend, you can bet the Tilted Kilt Pro 4 team and its driver will be preparing for another run at the podium!

Look for the Lucas Oil Off Road Race Series to head north into more pleasant summer weather for the weekend of June 23 – 24, as the series moves north to Miller Motorsports Park in Tooele, UT for Rounds 7 & 8.  Don’t forget to keep an eye out for LOORRS coverage on SPEED, CBS, CBS Sports, NBC Sports Network and MavTV – see you at the races!

Corry Weller is sponsored by:

Weller Racing has been at the forefront of development, testing and building some of the fastest performance motors in the UTV industry since 2006.  Based out of Chandler, AZ, Weller Racing provides custom UTV and ATV products for a worldwide client base, and is an established name in the world of short course off-road racing.  Duners, recreational riders and racers alike have counted on Weller Racing to provide them with countless hours of fun, and repeated trips to the podium.  For more information, visit their website at www.wellerracing.com, or call 480-507-4771.