In all forms of sports athletes compete to show and measure their craft against their peers and then the rest of us get to watch in awww. The olympics and world cup happen every 4 years but in the world of off road racing we are fortunate that every single year we get to witness our athletes compete on a global arena. It’s called Dakar and the 2019 edition is held in Peru.

Peru is home to some of the largest deserts.

The Atacama Desert is a desert plateau in South America covering a 1000-km strip of land on the Pacific coast, west of the Andes mountains. The Atacama desert is one of the driest places in the world, as well as the only true desert to receive less precipitation than the polar deserts.

We have raced in Peru before so some of the routes will be familiar to the competitors that are returning this time.

New for 2019 is the “Half Marathon” rule that allows a competitor to continue the race after the rest day in a parallel competition. They will be marked with an orange number plate.

UTV’s are not only establishing a dominant position in US based desert racing but now A.S.O. not only has a SxS class but vehicles built to SxS (UTV) dimensions may enter in the Auto (car) category.

A marathon stage will be held, spanning both days of stage 4 and stage 5. At the end of the 4th special stage leaving Arequipa, the vehicles will be directed towards two different bivouac camps: in Moquegua for motorbikes and quads and Tacna for cars, SxS vehicles and trucks. The competitors will join their assistance crews in Arequipa for the rest day. Then, before resuming the competition, the motorbikes and quads will once again spend a night in an isolated bivouac camp in Camaná to avoid having to drive at night on the long route before the 6th special stage.

Just a quick refresher on Dakar terminology. Marathon stage means zero outside support. Isolation from the support bivouac. Competitors repair and maintain their own vehicles or may help each other.

There will be two land rush starts for stage 5 and stage 9 where multiple competitors start side by side instead of sequential with 3, 2, 1 and 0:30 minute intervals.

During stage 2 the cars will not follow the tire tracks of motorcycles and navigators will be put to the test.

So what can we expect to see this year?

The exact course is hidden from the racers and navigators until the night before each stage. That is a standard rule in rally racing and one big difference to Baja style desert racing. In Baja the exact course is publicly shared by the event organizer weeks in advance and a new sport of pre-running has emerged. Not in rally raid. Driving by memory is not an option. Following other competitors is sometimes an option and perhaps a viable strategy but to run up front you are the one laying tracks. Cars and trucks consist of a driver and a navigator. A team that relies on skill and trust.

ASO, the event promoter that puts on Dakar has shared a rough outline of the course.  One thing that stands out right away is that the support route is relatively short compared to previous years events where each days stage is hundreds of miles apart and all support is in constant forward motion. This year support logistics appear easy, but easy and Dakar should never be used in one sentence. Never. 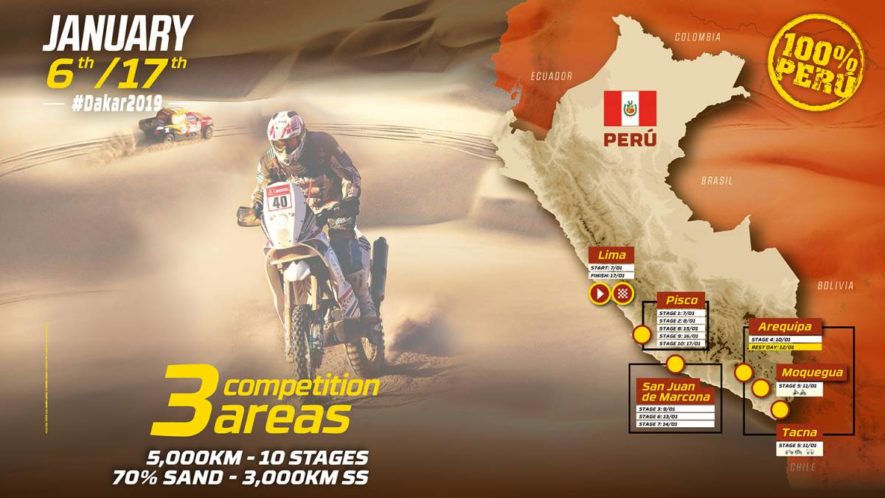 Thinking about who the favorites to podium will be is like picking a lottery number before the drawing. Anything can and will happen. Our forum community has some wild picks and here are ours and why. 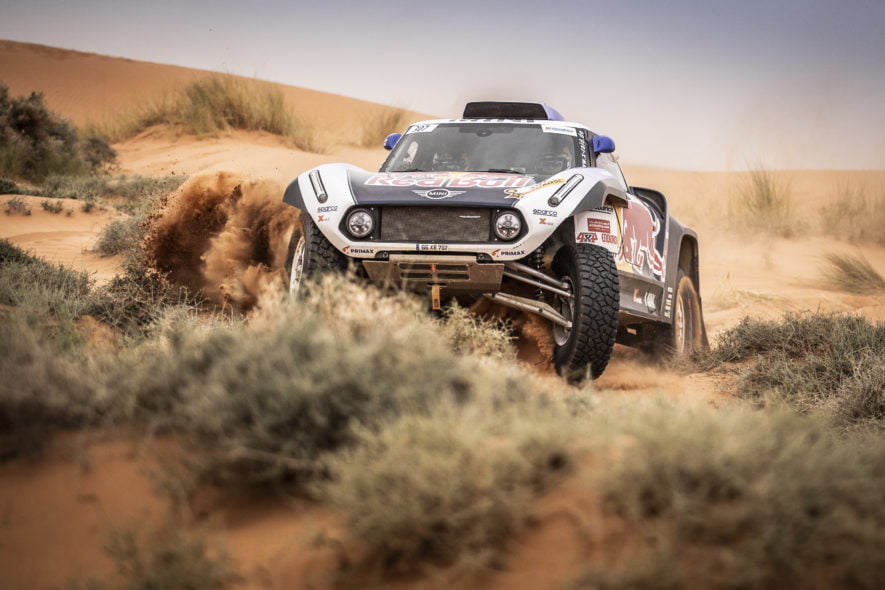 Carlos “El Matador” carries the 300 plate and as a previous winner with a track record of stage wins has to be taken serious. Lucas Cruz remains the trusted navigator. However they switched from Peugeot to team X-Raid in a Mini 2wd Buggy. 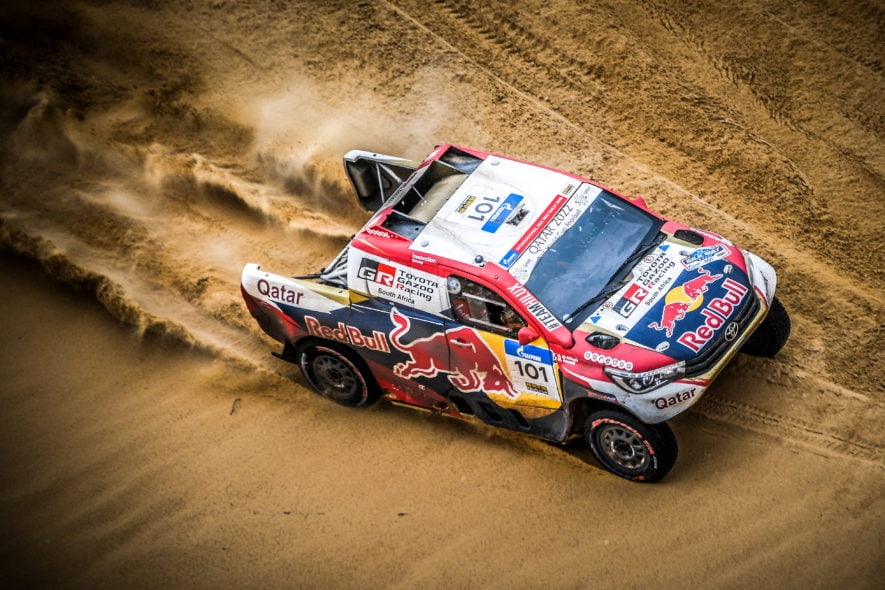 Nasser Al-Attiyah (301) and Matthieu Baumel are in their 3rd year with Toyota. Not only are the Toyotas the best sounding engines in Dakar (only challenged by the Renault Dusters V8) but after years of trying different teams of Hummer, X-Raid, Volkswagen and an Indy Buggy in 2013 Nasser is a constant top 10 finisher with 2 Dakar wins under his belt.

Stephane Peterhansel (304) and David Castera. In 2019 racing again with Peugeot he perhaps has the most wins to prove his craft. However his navigator is different from 2018 and in our opinion both are equally important. 14 Wins in grand total for Peterhansel and he is at it for at least 31 years. If experience is your metric for success then this is your pick. 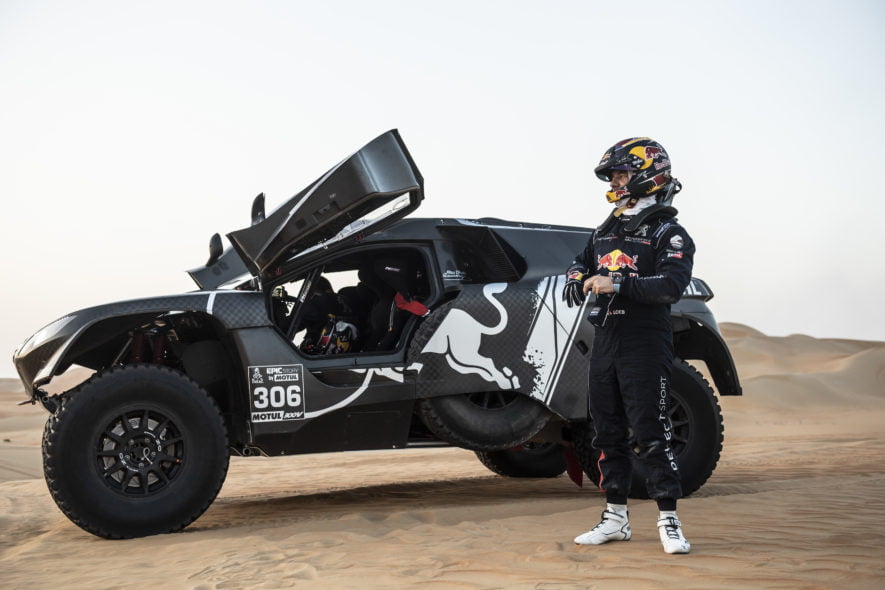 Sebastian Loeb (306) and Daniel Elena his year long navigator from his WRC days (9x champion). This marks his 4th year of Dakar racing and with 10 total stage wins the podium still eludes him. The tool of choice remains Peugeot. Peugeot withdrew official factory support but that doesn’t mean Loeb as a privateer is to be categorized amateur. Think Red Bull athlete and what level of support that translates to.

Since this is a world wide event we here in the USA covertly and without shame also overtly favor our representation to the global stage.

Robby Gordon (316) and long time navigator Kellon Walch are back after a 2 year absence from Dakar. If you follow Baja racing Robby is no stranger and just like Baja in South America he is hands down the crowd favorite. If Dakar would hand out trophies based on popularity his trophy shelf ran out of room a long time ago. 10 stage wins out of 11 Dakar attempts is an amazing accomplishment on its own.

New and revolutionary for the 2019 Dakar edition is that he brings a knife to a gunfight and does so with a straight face. That’s one of the reasons fans love him and competitors envy or perhaps even fear him.

Robby will race in a Textron Wildcat XX designed and built by himself and yes it’s in the same general car class as our top 5 favorites. “I have often been ahead of my time!” is the headline of an article we read and perhaps an overall theme. There are two more Textron Wildcats on his team.

Cole Potts (346) and navigator Max Eddy Jr. . Cole and Max are both freshmen to Dakar and in all likelihood a finish should be considered a win. Cole knows what is a stake and feels honored to be part of it and work alongside the more seasoned Robby Gordon in the second Textron Wildcat. Check our interview with Cole.

Blade Hildebrand (367) and navigator Bill Conger. Also new to Dakar but not new to racing. Blade is fast and he knows it, and with due time the big podiums will follow. He is in the third Textron Wildcat and part of the Robby Team. Check our interview with Blade. 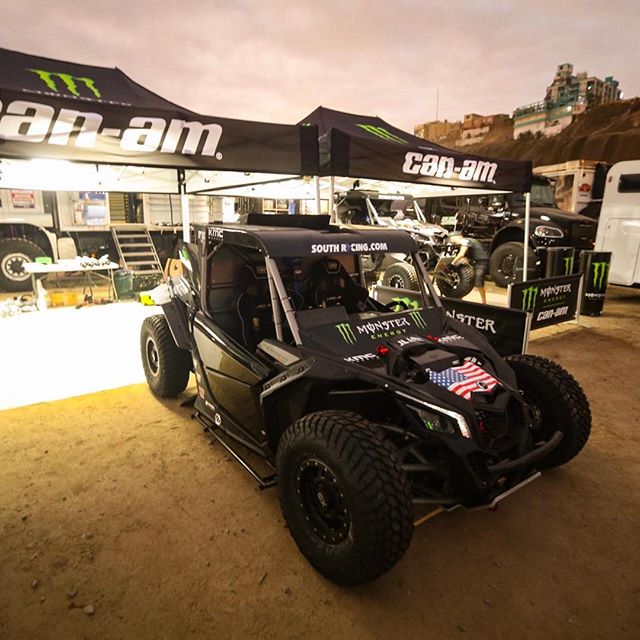 Casey Currie (343) Rafael “Rafa” Tornabell. Casey is also a rookie to Dakar but not his navigator and that in our opinion makes a huge difference. Casey obviously is a household name in traditional Baja style desert racing and short course racing with many accomplishments of the winning type. Unlike Robby’s UTV efforts he hedged himself into the SxS class by competing in a Can-Am Maverick. Assistance is outsourced to South Racing a seasoned Dakar outfitter.

There are also no less then 7 bike riders from the USA that we introduce in a our Bike story.

What to expect from RDC?

We are committed to bring you the most comprehensive information regarding Dakar 2019 possible.

Most of the up to the minute information will be in our Rally Raid section of the forum. The RDC staff will cultivate discussions, gather and organize multimedia information in one central point. We have associates at the rally this year that will work directly with us to provide content throughout the event.

Dakar 2020 is already on our minds and we plan to be there ourselves in full force.