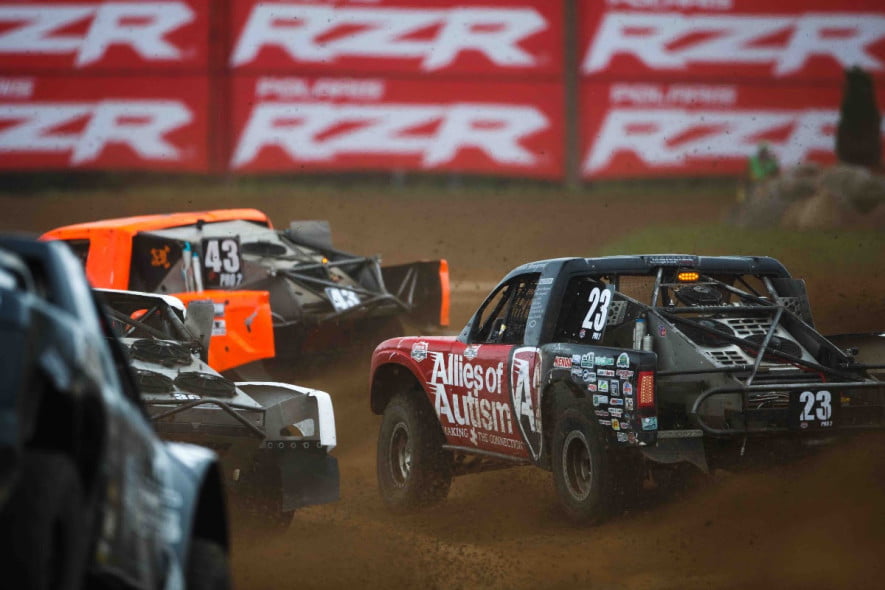 CRANDON, Wisconsin (May 22, 2019) — For 26 years, the woods surrounding the humble town of Crandon, Wisconsin have erupted with the screaming rumble of powerful engines and springtime motorsports. This June will be no exception, as the world’s largest purpose-built off–road facility erupts with the annual Crandon Forest County Potawatomi Brush Run off–road races.

The 26th Crandon Forest County Potawatomi Community Brush Run is comprised of a full-slate of Lucas Oil series PRO and MORR Sportsman races, with more than 200 teams expected to kick-off their racing season in traditional Midwest style. For 2019, the Brush Run represents the first of a five-race series in the Lucas Oil Midwest Short Course League, a summer-long schedule of events that will conclude over Labor Day weekend at Crandon’s historic 50th anniversary World Championship/World Cup races.

The Brush Run’s unique name is derived from the earliest races at Crandon, which were held over a 25-mile loop in the forests and brush around this tiny town.

After a long winter break preparing for the upcoming season, off-road racers from around the country will help celebrate the onset of spring in Wisconsin’s beautiful Northwoods, with an expected weekend crowd of over 25,000 enthusiastic Crandon fans set to join them. 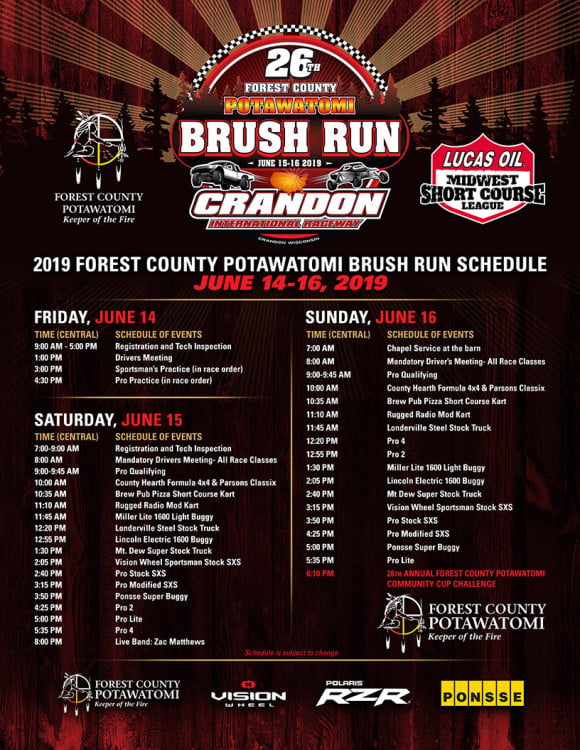 The massive gates to the massive “Camp Crandon” will open up at 12:00 noon on Thursday, June 13th, with many of the groomed grass camping spots still available. Saturday night will feature a festival-style concert free to fans camping at Crandon for the weekend, or those attending Saturday’s races. Crandon International will open its gates to the public all three days beginning at 8:00am.All race fans can enjoy watching practice on “Free Friday,” which takes place June 14th. Weekend admission is $45 for adults, with children 12 and under and seniors 75 and older getting in free all three days. One-day admission is just $25 for adults, with children under 12 and seniors 75 or older again enjoying complimentary entry. 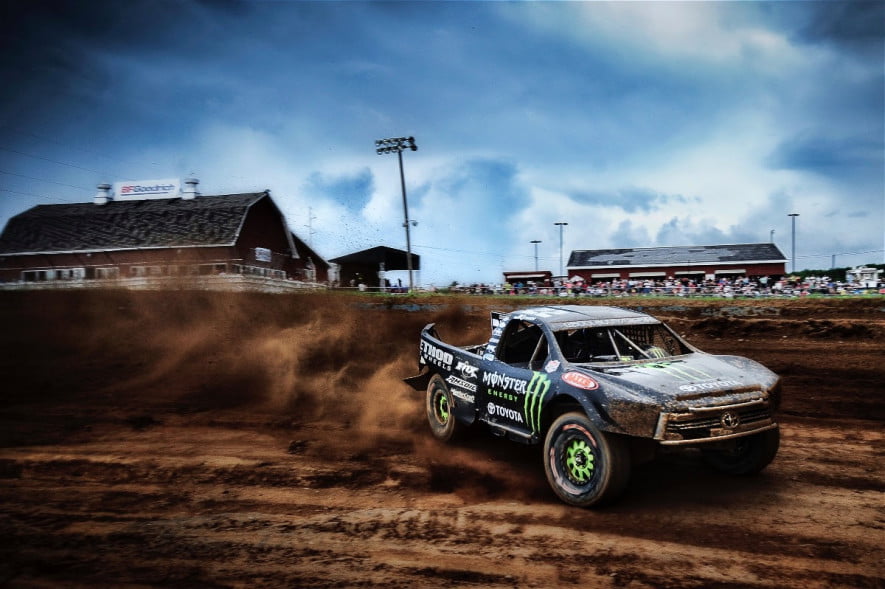 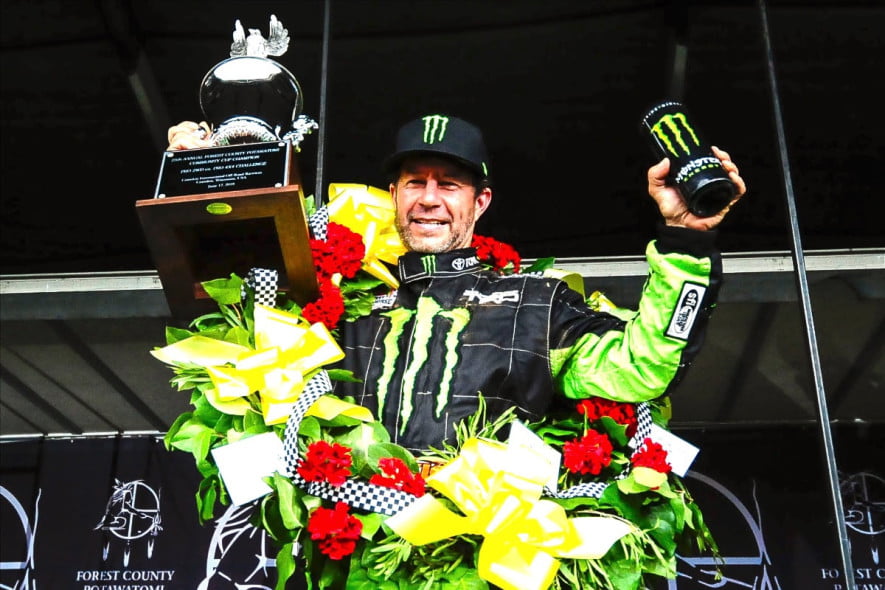 MEET MR. SIX TIME: Wisconsin’s Johnny Greaves, considered by many to be one of the greatest off-road racers in the world, has earned his place in history thanks in large measure to his success at Crandon International Raceway. That legacy includes winning six Forest County Potawatomi Cup crowns, including two back to back in 2017 and 2018. (Photos: Mike Roth)
The Brush Run’s feature race will be Sunday afternoon’s “Forest County Potawatomi Community Cup Challenge,” which pits the unlimited Pro 4 versus Pro 2 categories separated by a timed, staggered start. The annual race is always a fan favorite, and in 2019 offers a total cash prize package of $28,000, with the winner picking up a healthy $10,000 payday plus valuable product bonuses. Second place will pay $3,500, third place $2,000 and fourth place earning $1,500.

For the second year in a row, racers coming home 5th through 15th will earn a guaranteed $1,000 cash award for competing in the unique spectacle.

A longtime supporter of Crandon International Raceway and many of its racers, Forest County Potawatomi is a thriving community of about 1,400 Native Americans. Nearly half of the Tribe lives on the reservation, comprised of four communities in the southern section of Forest County, Wisc., near the town of Crandon. The reservation covers approximately 12,000 acres of forests, clear lakes and streams, most of which is held in federal trust status, while the Tribe is also the largest employer in Forest County. 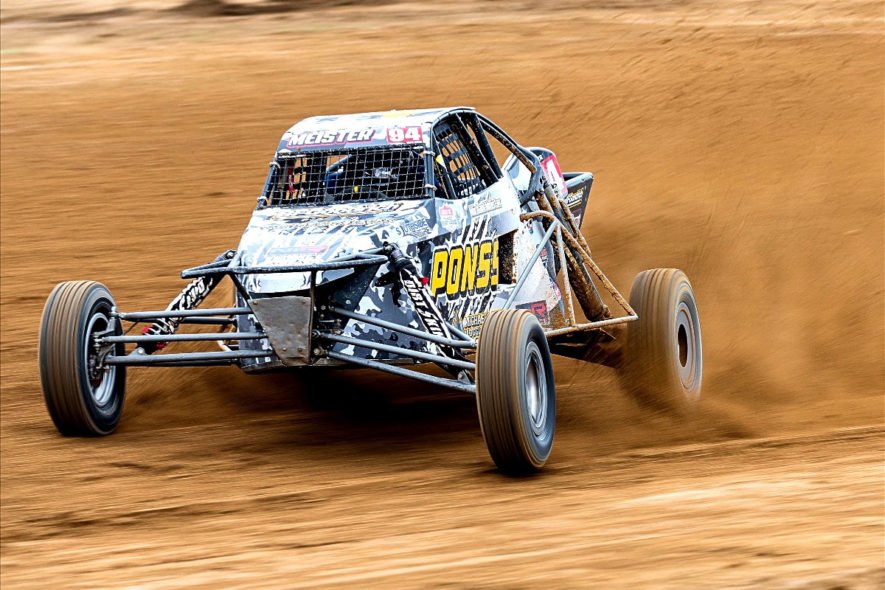 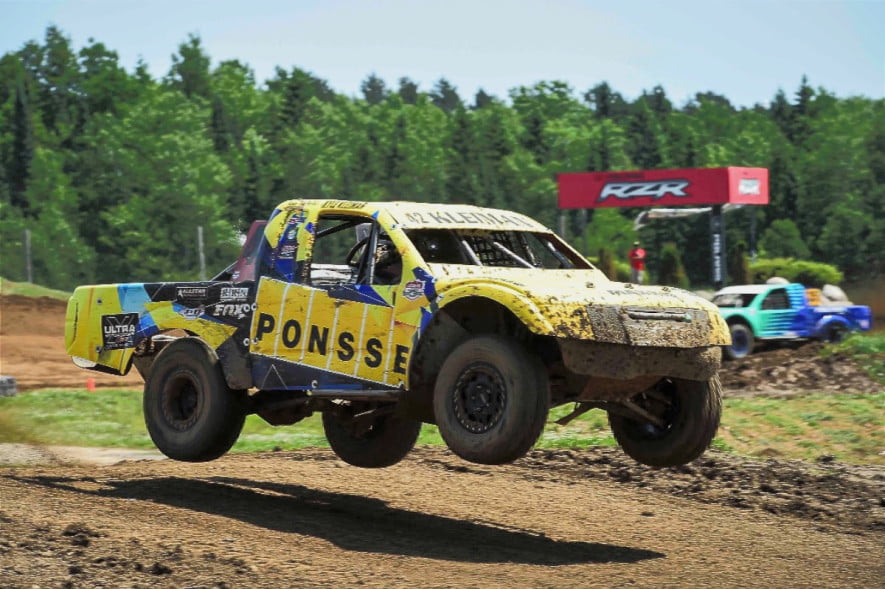 THE 2018 CHAMPS: Sharing corporate partnerships with Crandon track sponsor Ponsse, 2018 Super Buggy champion Michael Meister (top) and LOMSCL Pro Light points winner Kyle Kleiman are among those expected to return to the upcoming Brush Run weekend to defend their titles. (Photos: Andy Noggle/Mike Roth)
For 50 years now, Crandon and our two yearly events have been an important backbone for the sport of short-course off-road racing,” explained Cliff Flannery, president of Crandon International Raceway. “While so much has changed in that time, the pride of promoting our 26th Forest County Potawatomi Brush Run still runs deep. So does the thrill of hosting world-class racing for our fans to enjoy, and 2019 is shaping up to be the most exciting seasons in our history. It all starts in June, and we can’t wait!”
Crandon fans can still reserve great camping sites and a limited number of remaining Vision Wheel Hospitality Complex grandstand seats by visiting our website at www.crandonoffroad.com.
ABOUT CRANDON INTERNATIONAL RACEWAY: