Menu
Log in
Register
Irvine, Calif. (March 17, 2011) – Crowley Monster Energy Kawasaki Teryx® pilot Jon Crowley opened the Valley Off Road Racing Association racing season at Prairie City OHV Park in Folsom, Calif. by dominating every moto. This short course was one mile long and eight laps were completed by the time the checkered flag dropped. Crowley piloted his Teryx to sweep all three motos in the 800-1000cc class and overall for all UTVs, opening the VORRA season with a commanding win. 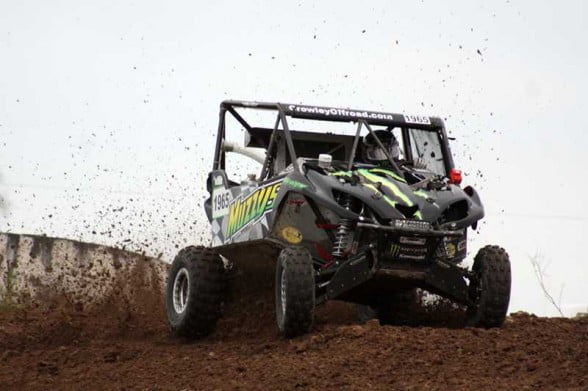 Roaring Like a Monster
With the Muzzy Kawasaki Teryx’s monstrous power plant under his foot, Crowley powered past competitors leaving them in his dust. Even without a commanding start, once his Teryx found some open course it was only a matter of time before he dissected the competition and charged out to the front. Once Crowley got into the lead, the rest of the field had a tough time staying in his rear view mirror as he continued to pull away.

“My Teryx ran like a beast,” said Crowley. “With the Muzzy’s-built power plant it really pulled hard out of corners and on the long straights. In the first moto I started in the second row, but worked my way to the front by the end of the first lap. After I got out front I just kept on the gas and was able to hold the lead for the remaining seven laps. The second moto I got a bad start, and trailed for seven laps. On the last lap, I was able to sneak past the leader in a hairpin turn and hold onto the lead through the finish. The third moto I grabbed the holeshot and went wire-to-wire for the win.”

Flying Through Folsom
VORRA changes the short courses at each event to ensure a fair race for all drivers. This course setup was fast and tight, with ten jumps. Although Crowley’s suspension was setup for desert racing, and not the short course, he was able to monopolize on good lines and power his Teryx through the finish line in first place.

“We had the Fox shocks tuned more for desert racing,” said Crowley. “As a result the Teryx tended to jump with the nose down a bit more than I wanted which slowed me down a little. I made up the time on straight-aways, taking advantage of that 999cc power-plant. I am currently working with Fox to fine tune the shocks so we can hit the jumps even harder at the race in April.”

Dialed In
Now that Crowley has had a chance to work out the bugs, the competition will have to work even harder just to stay in his rear view mirror in the next round. The Crowley Monster Energy Kawasaki Teryx team will be lining up for the second round of the VORRA series at the Prairie City OHV Park in Folsom, Calif. on April 16th and 17th.