Monster Energy’s Casey Currie (Nissan/General Tire) opened up a can of Monster on the PRO Light class this past weekend at Wisconsin’s legendary Crandon International Off-Road Raceway, dominating the Traxxas TORC Series’ top young racers like no one else this year in a 1st/1st sweep over two days of racing action.

And joining Currie as a victor at Crandon was Monster Energy’s Johnny Greaves, who won Friday’s abbreviated TORC PRO 4×4 race – a makeup race for the rainout at Crandon this past June – while also taking top honors in Saturday’s World Championship PRO 4 race at Crandon. 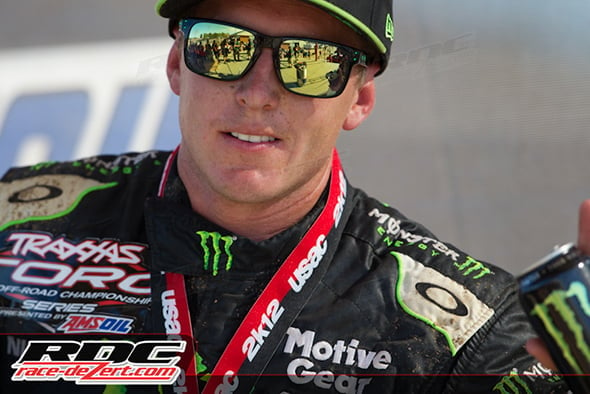 Kicking things off with Currie, a fan-favorite at Crandon given his energetic personality and win-at-any-cost driving style, was heavy on the gas all weekend. In Saturday’s contest the Californian and former TORC PRO Lights champ (2010) chased down Keegan Kincaid on the third lap, wrestling the lead away from the local racer at the infamous Crandon Barn Turn. Per TORC’s rules the field would be regrouped under a “competition yellow” flag, which erased an already measurable lead for Currie midway through the race. This didn’t faze Currie a bit, though, as he got back on the gas and led Luke Johnson and Kincaid through the checkers with seemingly relative ease. 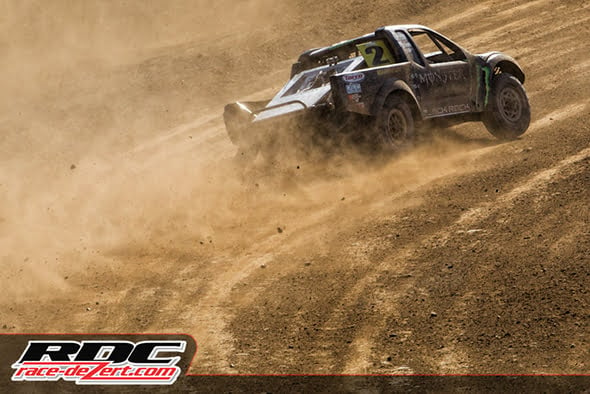 “I’m stoked to be at Crandon! This place is amazing,” said Currie from the podium, pumped with his win at the World Championships. “Been so much fun this weekend, hanging out with the fans last night. Can’t wait for tomorrow.” In addition to the 1st place trophy and World Champion ring for winning on Saturday at Crandon, Currie also picked up a check for $5,000 – courtesy of Traxxas – for the Traxxas Maxx Lap – fastest PRO Light lap time.

Monster Energy’s CJ Greaves (Toyota/Maxxis) was on the pace early with Saturday’s PRO Light front runners, but ran into some unfortunate mechanical issues and wound up placing 11th.

In Saturday’s TORC PRO 4 contest Johnny Greaves made up for getting pinched a bit on the start and got past the Jenkins brothers, Mark and Mike, and into 1st place early on in the contest. A sketch on the Oakley Timepiece Corner would soon relegate Greaves back to 4th, with his adversary – Ricky Johnson – inheriting the lead due to Greaves’ mistake. 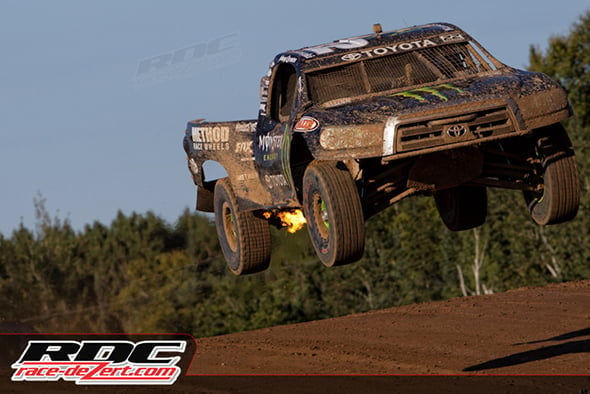 Greaves would then buckle down and click off several fast laps – including the day’s fastest lap to earn himself the coveted Oakley Bomb Award. At the competition yellow Greaves trailed only Johnson, sitting solidly in 2nd place. But the much-anticipated battle between TORC’s two heavyweights for Crandon’s World Championship ring would fizzle as quickly as it was set up as a white puff of smoke out Johnson’s truck signaled the end of his day. PRO 4’s Scott Douglas would get a chance to run at Greaves with a second restart (after Curt LeDuc and Adrian Cenni got tangled up), but Greaves easily put the hammer down and brought ‘er home for the World Championship victory.

“I came out here and these fans watched us work on our truck all night last night … they’re the reason why we’re able to turn this thing around,” said the hometown Greaves. “Then we gave them some great racing, which they paid to see.” 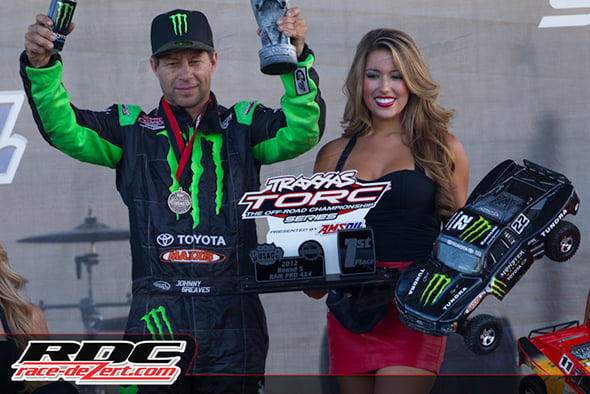 Prior to Johnny Greaves’ Saturday PRO 4 victory son CJ booted up and ran the PRO 2WD class to a solid 5th place finish. CJ Greaves, 17, stepped up and battle valiantly with racers his dad’s age – including NASCAR’s Robby Gordon and all-time great off-roader Rob MacCachren. The 5th place finish for Greaves was his second in as many days, placing 5th in Friday’s abbreviated PRO 2 race.

Sunday’s event at Crandon was raced before one of the largest crowds ever to assemble for a short course off-road race. And Currie put an exclamation point on Monster Energy’s weekend by hammering out another 1st place finish in the PRO Light class – giving him a sweep of the entire PRO Light weekend at the world’s biggest short course off-road race.

Battling for the holeshot to start the PRO Lite race, Brad Lovell and Caddell left a small opening for Currie, and that’s all the former champ needed. He plugged into the early lead and took off  – unchallenged – for both halves of the contest for the victory.

“I’ll put on a show or lose!,” shouted the energized Currie to the Crandon faithful, some 18,000 strong at Crandon on Sunday alone. “It’s the crowd, I swear! If I’m gonna win I say win big at the Big House!” 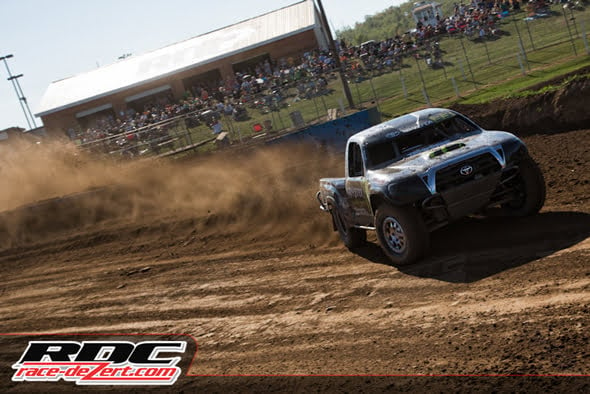 In PRO 2 action on Sunday CJ Greaves put up one of the top three fastest laps early in the contest and led the race for a brief time before putting himself in solid position to podium (2nd) at the competition yellow. Starting the second half of the contest behind veteran Chad Hord, Greaves would get caught and passed by MacCachren on the Oakley Timepiece Corner. Undaunted, the teenager held on strong to his 3rd place position, fending off runs at him by Gordon and defending PRO 2 champ Bryce Menzies.

“We’re out here running with the best of the best,” said CJ Greaves. “Congrats to Rob (MacCachren, on his 200th career win). He straight outran me today.” 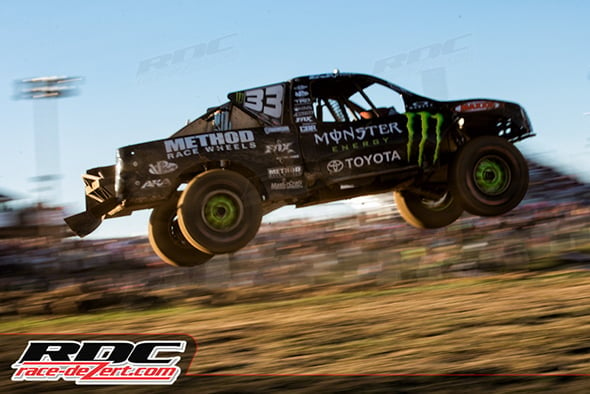 In PRO 4 action, having won three-straight TORC PRO 4 class races in a row, Johnny Greaves looked to have his fourth-straight win locked down when he railed past Adrian Cenni (Real Tree Energy) for the early race lead and ran away with the lead through the competition yellow. But the mechanical gremlins that haunted Greaves throughout much of the season reared their ugly heads again and ejected one of Greaves’ wheels – as speed – out into the woods lining the back section of the Crandon track. Game over for Greaves in PRO 4 on Sunday, though the biggest race of the weekend was still up for grabs.

The $40,000 winner-takes-all ten lap AMSOIL Cup race, pitting PRO 2 trucks (with a 12.5-second head start on the famous Crandon Land Rush start) against the PRO 4 trucks. So this would be only the second time this year that Monster Energy’s Johnny Greaves and son CJ would hook up in the same race (the first being the Chairman’s Cup race at Crandon in June, where CJ got the upper hand on his dad). But the AMSOIL Cup would end as quickly as it started for Johnny Greaves as the veteran put ‘er into the wall on the Skybox Straight, ended his chances at the $40K. CJ would fare much better, but his PRO 2 truck would be no match for the mighty PRO 4 rides and he finished off the podium.