THE FLAG DROPS ON THE SILK WAY RALLY!

And they’re off on the 2019 SILK WAY RALLY! The official podium ceremony, next to the banks of the River Angara, marked the start of this 9th edition.

Not far from here, in the Siberian taiga forests, this Sunday the entrants in the bike, car and truck classes will put themselves to the test over the technical tracks of this first stage alongside the shores of LAKE BAÏKAL. At the end of the second day of scrutineering attention turned towards the start podium, set up in the COUNTE SPERANSKY PLACE where, early in the evening, all the competitors entered on this grand adventure in the ‘Far East’ announced their ambitions for this 2019 edition of the SILK WAY RALLY. 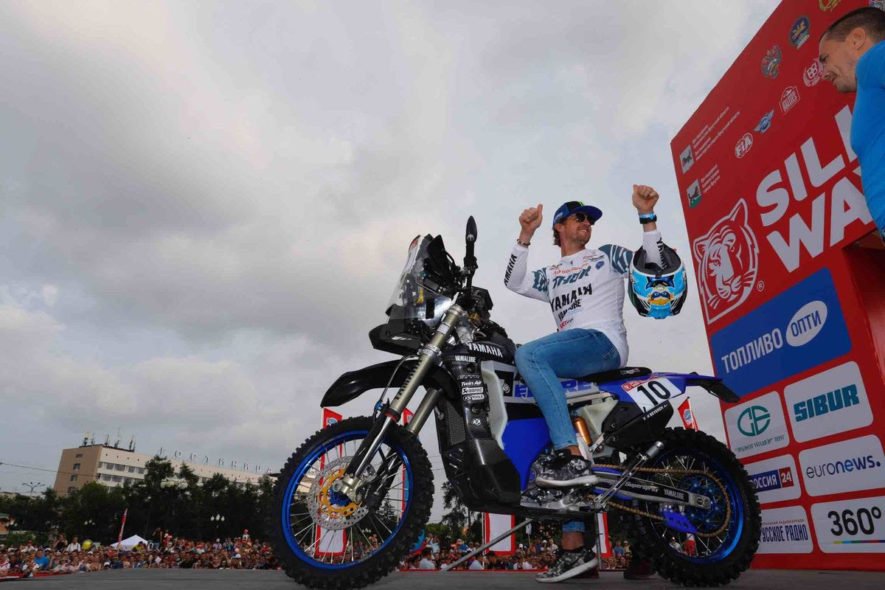 For its very first year, the bike category on the 2019 SILK WAY RALLY will count towards the FIM Cross-Country World Championship. No surprise then that the main factory teams are all present. Winner of the first round of the championship in Abu Dhabi a few weeks ago, the British rider Sam Sunderland, winner of the 2017 Dakar, will be leading the RED BULL KTM FACTORY RACING’s attack.

Sam Sunderland: “It looks like it’s going to be a tough old race and really long. It’s difficult to know what to expect as it’s the first year for bikes, so everyone is kind of thrown in at the deep end. But I certainly feel we are prepared. It’s nice to take on a new challenge like this, it’s one of the things that I love the most about our sport.”

Another serious candidate for final victory, the Frenchman Adrien Van Beveren leads the ‘Blues’ of the YAMAHA RALLYE TEAM, who have also brought Xavier de Soultrait and the Argentinian Franco Caimi to the start here in Irkutsk.

Over at the MONSTER ENERGY HONDA team they are counting on the speed of the Catalan pilot Joan Barreda, the Argentinian Kevin Benavides and the young Chilean Jose Ignacio Cornejo.

Joan Barreda: “It is a rally that I have wanted to ride in for quite some time. Finally, it has been opened to motorcycles and on terrain that I think I will like. I am the only one of the three riders who has ridden in China, but that doesn’t give me any advantage. Hopefully, we can have a good race that will help prepare us for the Dakar 2020.

The ROCKSTAR ENERGY HUSQVARNA RACING FACTORY team will be presented by the American, ex-MX and SX rider Andrew Short, who will continue his apprenticeship in the discipline. The Indian HERO MOTORSPORTS TEAM RALLY are placing their hopes in the experienced Portuguese rider Paulo Goncalves. Race within the race, the Spaniard Laia Sanz (KTM Rally 450), a top 10 contender on the Dakar, will be looking to do better here and of course finish first in the women’s class, ahead of the Russian Nifontova and the Czech Novotna (Husqvarna FE450). For their first participation on the SILK WAY RALLY, the quad category will be headed by the five-times world champion and ex-Dakar winner, the Pole Rafal Sonik (Yamaha Raptor 700). 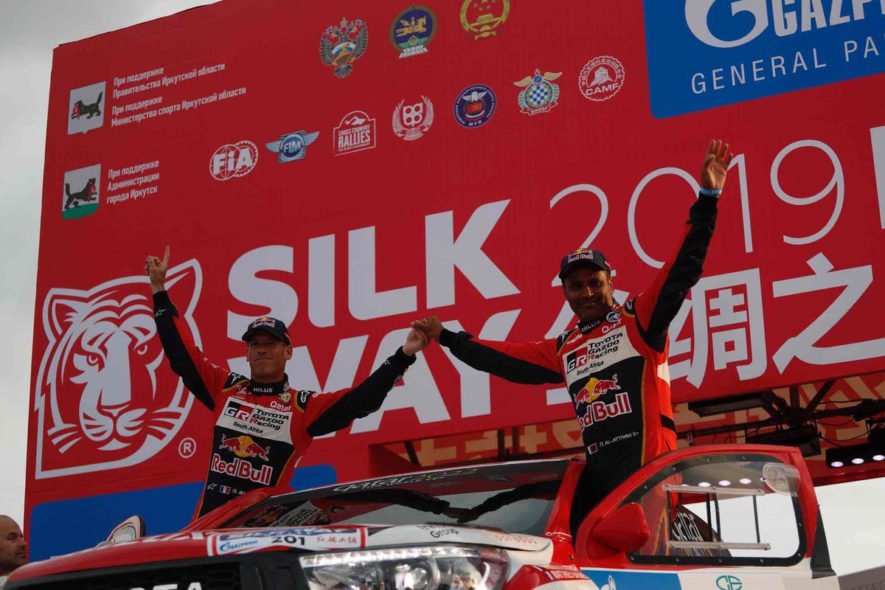 Second in 2010 and again last year, Nasser Al-Attiyah (Toyota Gazoo Racing) arrives in Irkutsk with a single goal: triumph at this SILK WAY RALLY, the only major international event he has yet to win.

Nasser Al-Attiyah: “This is one event that I really want to win and, hopefully, this will be my year. I have taken part in six rallies so far this season and won all six, including the win at Rally Kazakhstan at the start of June. This is a long and demanding rally and the stages will be a challenge for everyone.”

The triple Dakar winner won’t however have an easy time of it. From within his own OVERDRIVE team he’ll have to watch out for the Dutchman Eric Van Loon and of course the 2018 winner, the Saudi Arabian driver Yazeed Al Rajhi.

Yazeed Al Rajhi: “I’m really happy to be back on the Silk Way Rally. This 2019 edition looks like it is going to be fantastic, but also very difficult. We will be starting first with Nasser Al-Attiyah just behind us, which means we’re going to have to set a fast pace right from the off, while at the same time not taking too many risks.”

Carrying Russian hopes will be Denis Krotov (MINI JCW), but the surprise could also come from the two-wheel drive category, well represented on the 2019 SILK WAY RALLY, with notably the very rapid buggies of the Chinese driver Han Wei (Geely SMG Buggy), the Russian Andrey Rudskoy (G-Force Bars) and the Frenchman Mathieu Serradori (Buggy CR6 Century Racing). Considered as one of the favourites, the American Bryce Menzies (Peugeot 3008 DKR MAXI), has unfortunately been forced to pull out at the last minute.

Bryce Menzies: “I’d been logging many miles in our Polaris RZR to prepare for Silk Way. I had also been working out to make sure I was in my best physical shape to compete. Then I got this problem with the bulging disc in my back. I’m so disappointed that I can’t make the race, but I’m looking forward to future rally opportunities.”

The fight in the fastest going category in the sport, SSVs (Side by Side Vehicles) will no doubt be animated by the Russian Sergei Kariakin (Maverick X3) and the Spaniard Jose Pena Campo (Polaris RZR). 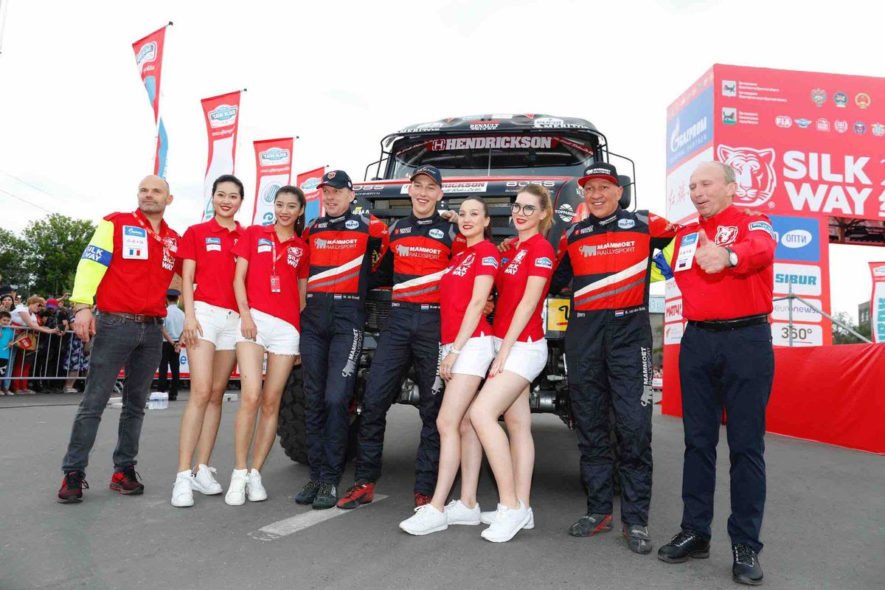 FOR THE HEAVYWEIGHT CROWN

With no less than four trucks on the start line, the KAMAZ-MASTER team will be once again favourites for final honours on this 9th edition of the SILK WAY RALLY. The battle will be epic between Andrei Karginov, the title holder and his teammate Airat Mardeev, winner in 2012 and 2016.

As well as fighting it out between themselves, they will have to watch out for the Belarus MAZ team who have entered no less than three trucks, driven by Viazovich, Vishneuski and Vasilevski. Another outsider, aboard his impressive Renault, Martin Van Den Brink (Mammoet Rallye Team) is also clearly planning to be up at the front of the race, as will be the Japanese driver Teruhito Sugawara (Hino 500).

Martin van den Brink: “We are clearly aiming for a place on the podium. Last year was disappointing with 7th place at the end. We are going to drive at our level, keep an eye on the Kamaz and fight with the Maz team. It is going to be a tough route and that suits us and our truck that has improved since the last Dakar.”

VLADIMIR CHAGIN, Silk Way Rally Director: “I am especially happy to welcome the bikes to this 9th edition. This year’s route will be difficult but very interesting. Honestly, I would really like to be behind the wheel to enjoy the tracks in Russia, Mongolia and China. I would like to thank the whole SILK WAY RALLY TEAM for all the hard work they have put in and hope to once again be part of a great race that will remain an unforgettable adventure for all the competitors.”

FRÉDÉRIC LEQUIEN, Silk Way Rally Deputy Director: “This 2019 SILK WAY RALLY offers a dream route, not only for the competitors but also for the many TV viewers who will be able to follow this fantastic adventure in almost 190 countries. For the first time this 9th edition incorporates the bike category and becomes the second round of FIM World Championship. It will no doubt offer a fantastic spectacle and take our event into a new dimension.”

The first stage will shake everybody up: 51 kilometers along the narrow roads in Siberian taiga. On the first kilometers the track is hard and stony, not easy to find an opportunity to overcome. Forest roads, river beds and dusty Siberian hills are the first steps into an amazing racing journey. All those that will meet all the challenges of the day will get some rest at an enjoyable rally bivouac, situated right on the Baikal lake shores.

The Russian global energy company PJSC Gazprom has been engaged on the event as a main partner since the first edition of the Silk Way Rally in 2009.

Toyota Hilux for the forth time already are the Silk Way Rally official cars.

Because of their unique design and capabilities, TOYOTA all-terrain vehicles have proved their extraordinary resistance during the various reconnaissance and on the rally. Toyota is producing vehicles that you can rely on in any situation. Distinguishing characteristics offroad, endurance, an amazing ability to adapt to harsh road conditions and climate…. Main idea is that Land Cruiser Prado, Land Cruiser 200, Fortuner and Hilux tackle the challenges delegated to them.

PJSC SIBUR is the largest integrated petrochemicals company in Russia and the technical partner for innovative materials. They are sponsoring a special award for “impressive vehicle reliability and excellent skills demonstrated under extreme circumstances”.

Gazprom will be filling up the Silk Way Rally’s vehicles along the route with the company’s branded diesel fuel, Diesel Opti. OPTI fuel performed excellently in extreme conditions, and our continuing cooperation is the best proof.

Gazprombank is one of the largest multifunctional banks in Russia.