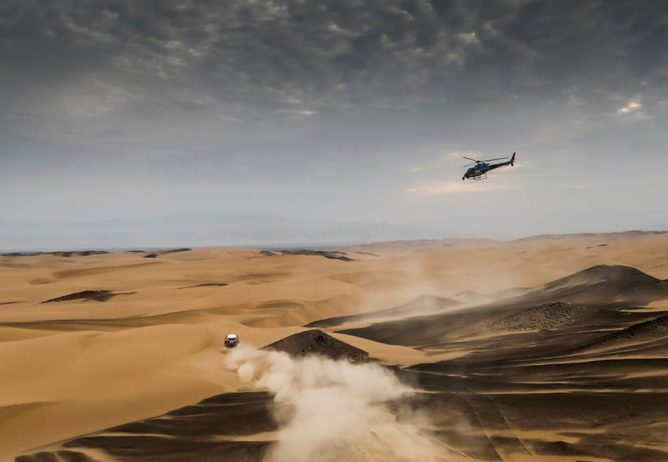 After a short appetiser on Saturday, the competitors faced the full might of the dunes of Ica near Pisco on Sunday. The second stage in Peru was 90% off the track. The 267 km challenge required some serious navigational skills, especially among the car drivers, who for once had to open the road. In the end, the Peugeot drivers capitalised on the tracks of the top 10 to burst back onto the scene after a disappointing opener. 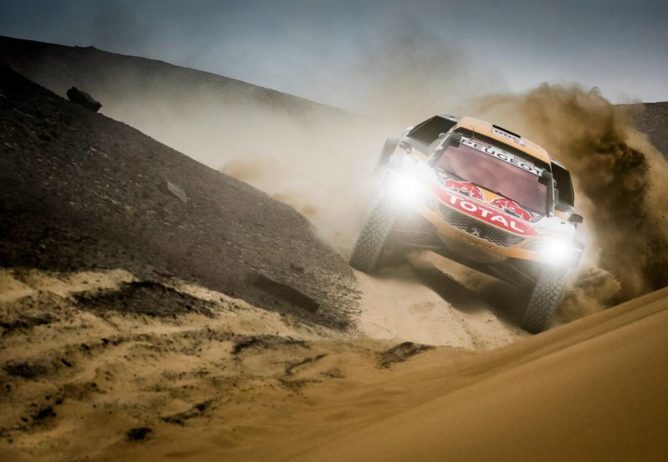 Cyril Despres turned the race on its head in Pisco. He drove his Peugeot superbly and navigated the dunes flawlessly to secure his second Dakar stage win in the car category. The victory also catapulted him to the overall lead with a 27-second margin over Stéphane Peterhansel, who finished second on the day and rocketed up the general classification as well. Sébastien Loeb made it a 1-2-3 for the Lions. The motorcycle classification also saw a change of leader, with an amazing Joan Barreda turning on the afterburners in the second half of the stage to defeat his rivals. Adrien Van Beveren, meanwhile, managed to hold his deficit to about three minutes. In the quad category, Ignacio Casale took another step towards victory in Córdoba with his second stage win in as many days. However, 2017 winner Sergey Karyakin spent the entire stage hot on his heels and remains well within striking distance after losing just 43 seconds. Defending champion Eduard Nikolaev opened a serious gap in the truck category, leaving his rivals in the dust after just two stages. 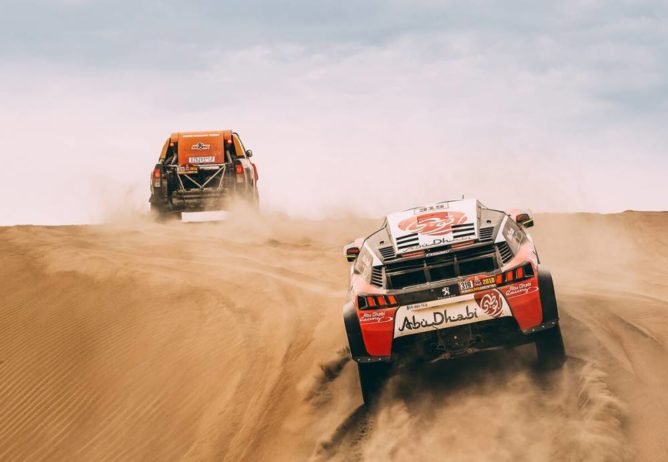 For all his experience in the world of motocross and enduro, Jonathan Barragán is still a rookie at the Dakar. The biker from Madrid is making his debut on a GasGas in the Spanish maker’s return to the greatest rally in the world. Barragán, eleventh in Pisco and just three seconds off the pace of 2016 champion Toby Price, is already mixing it with the big boys. He is now the top-placed rookie in the general classification.

The nightmare scenario came true for Nasser Al-Attiyah in Pisco. The Toyota driver, who had to open the road in a navigation-heavy special after yesterday’s victory, steadily lost time to the Peugeot drivers and finished the stage about a quarter of an hour back, although it must be said that his co-driver Matthieu Baumel fell ill after just 15 km. 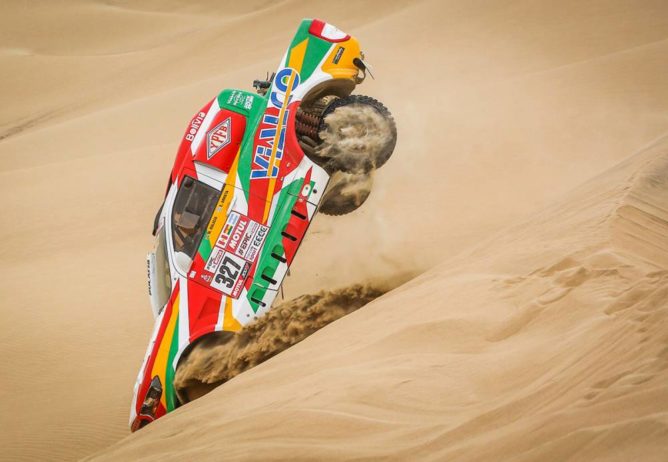 Joan Barreda is still chasing an overall Dakar win, but today he proved again that he is one of the fastest bikers the rally has ever seen. The Spaniard claimed his 20th stage in Pisco. The only ones with more stage wins are all multiple-time Dakar winners: Despres and Peterhansel (33), Arcarons (27), Coma (25) and Auriol (24).

Sébastien Loeb: “I think we posted a decent time and we won’t be opening the road tomorrow, so I think it will be all right. We always follow the track, even though we sometimes suspect that it’s not the right one. But we stay the course because we don’t want to lose it. Our goal is to make it out of Peru in one piece. Failing to find a waypoint can cost you dearly.” 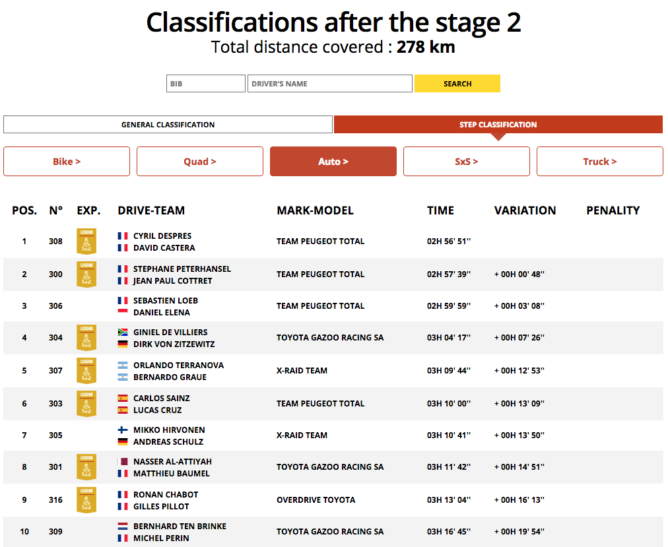 Bryce Menzies (USA) and co-driver Pete Mortensen (USA) had made an encouraging start to their Dakar debut with a Top 5 placing on the opening stage. This good work counted for nothing though when the American pair’s MINI rolled out of the race just six kilometres into today’s special stage.

“When we hit the bump it just unloaded the rear and it went to the front bumper, we flipped six or seven times. It was not what I wanted to do at my first Dakar and I’m feeling really bad for the whole team.” – Bryce Menzies