In Peru, they call it “fesh-fesh.” A term, unbeknownst to them, the racers were becoming quite familiar with. Maybe they thought they’d seen the last of it. But fesh-fesh, or silt to the rest of us, ruled the start of Special Stage Four. Like riding in Moon dust. Traversing the mountains of Mars. The route today was otherworldly.

Did the race go by quickly, or was it just Ricky? The Fast Guys were certainly still fast among motorcyclists, but even the second speediest rider of the day, 2018 Dakar Winner Matthias Walkner (#1), came in a whopping 6 minutes and 19 seconds after Brabec (#15). 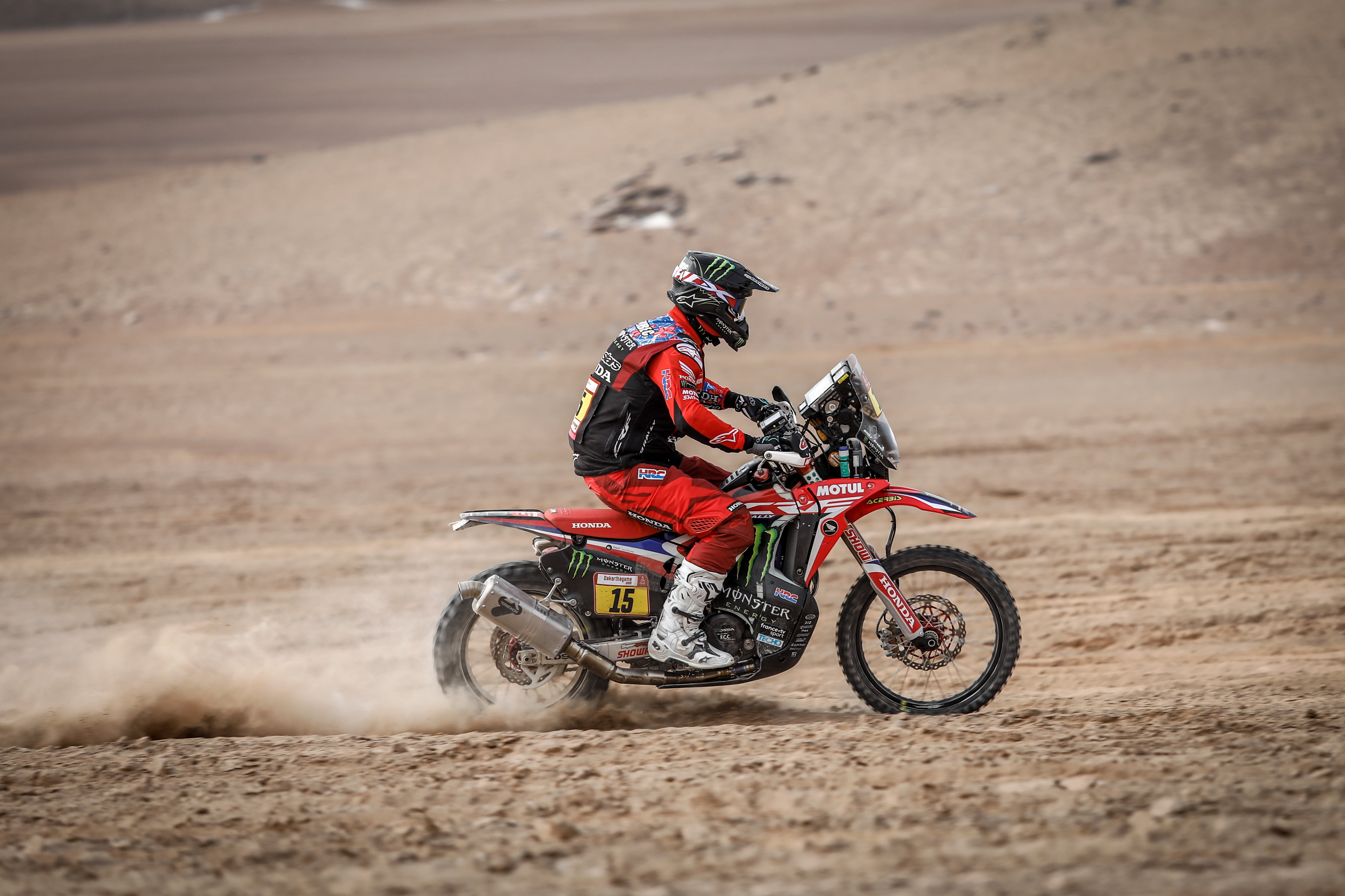 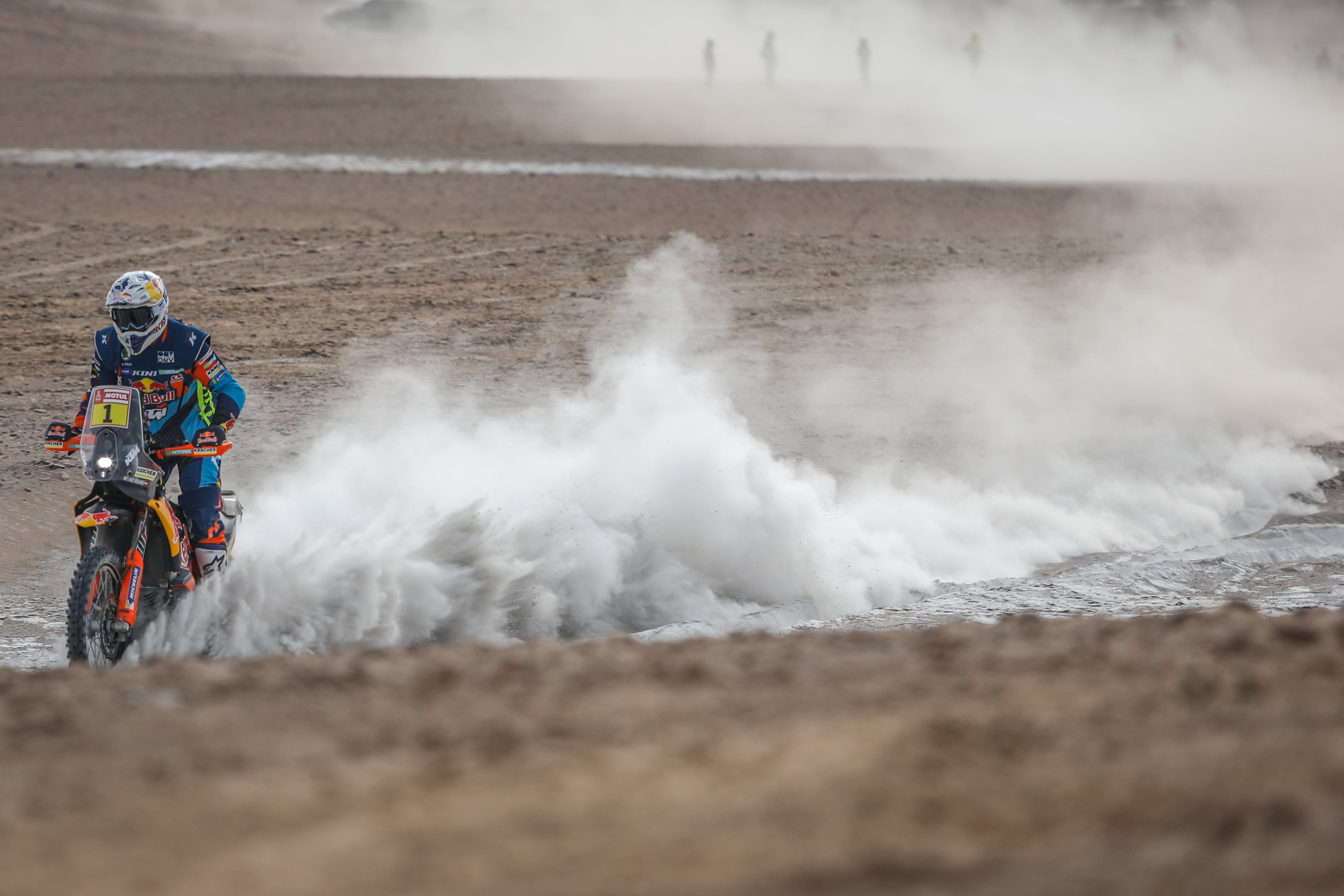 “I needed it. Yesterday was tough on me and I lost a lot of time. Today I really, really needed to push with the marathon night and motocross start tomorrow. It kind of helps me because tomorrow I can…have the stage under my control and finish where I want. With the motocross start it makes it easy to manage. That’s my plan for tomorrow and I’m really happy with today and getting the stage win as well as making up a bit of time… My body is still 100%, the bike is still 100%.” – Brabec #15, HRC Factory Team, USA

A huge win not only in Part One of the Marathon stage, but as the now overall leader in the General Classification for bikes. It’s not only a victory for himself and HRC, but for America who’s watching anxiously. No pressure.

“Ricky is executing a really good Dakar thus this far.” Said HRC’s team official Johnny Campbell. “Yesterday, was really tough with the fog and mental stress of opening the stage. Today was a good day to attack, take back some minutes. Tomorrow [Friday, January 11th], they will have the second part of the marathon stage, starting with a mass start in a line. If Ricky maintains his consistency tomorrow, that will help for the final stages.”

A lot of the same faces smile back at you when you scroll through today’s standings on the event site – Price (#3), Van Beveren (#4), Sunderland (#14), Goncalves (#2). But it’s the rookies, the grass roots guys, the men and women who prove all you need to dare the Dakar Rally – besides a small fortune – are heart and will… And maybe a couple of loose screws.

New to rally, but not motorsports, Andrew Short (#29) seems to be the most consistent racer out of the bunch. Not swaying too far in or out of the Top Ten, in this special, he clinched 12th place. Short has managed to keep a steady pace throughout the event, showing the world that his key to success so far is repetition. Fan favorite Laia Sanz (#17) is at this point a Dakar veteran, sitting at the 20th position by the time she reached Moquegua. Her regular presence with the Elite 20 continues to inspire followers of all types to go for what may appear to some as impossible. Rookie Skyler Howes (#73) has been posting impressive times all week, bringing himself from the back of the pack into a seat next to the factory riders, if not contention for the podium. He took 23rd in SS4 which puts him only two spots behind Sanz in the General Classification. 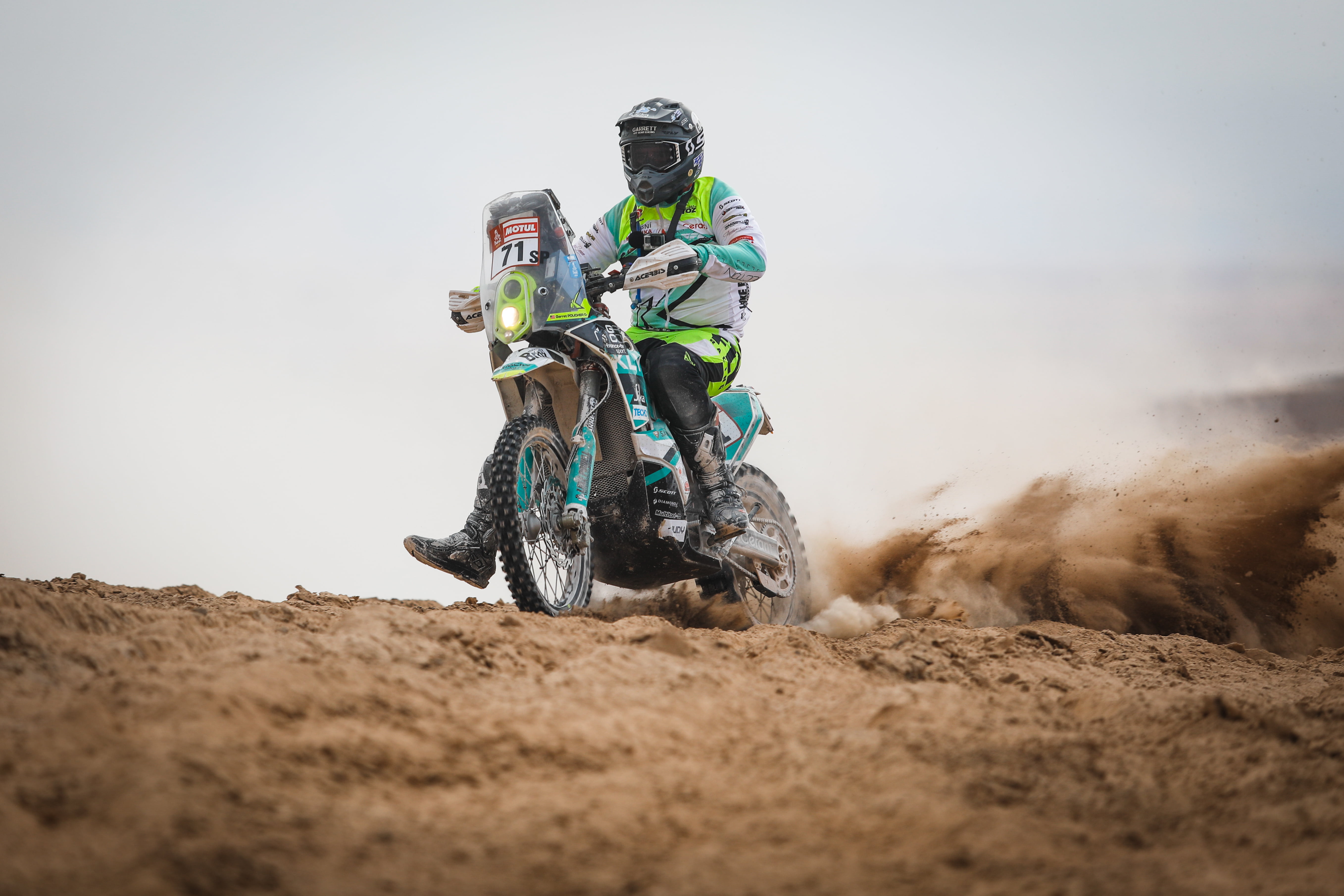 Of the remaining Americans, Garrett Poucher (#71) having had an incredible comeback during Special Stage Three, jumping 92 positions into 28th, settled for a humbler 56th place this Thursday afternoon. Although if you asked the unrelentingly upbeat rider about his day, he’ll throw you a thumbs up, and look almost too ready to jump back on the saddle. An underrated competitor thus far, Nathan Rafferty (#104) has been quietly climbing the ranks every day, without any real setbacks, leaping to the 64th starting position for the morning’s “motocross” sendoff – a nostalgic ode to the origins of this 41-year-old event. Motorbikes and quads will depart from Moquegua while the four-wheeled iterations of machine will embark from further south outside of Tacna. Each group will begin in a line across a wide open plain, literally battling head to head for the most favorable positions.

It’s safe to say, viewers are excited to see their chosen teams meet on equal terms, if only for one round. Casey Currie (#343) will represent the US in his Side-By-Side, 9th in order.

Oddly, a few names are missing from SS4’s standings in Autos, specifically the Americans. Although they haven’t been noted as withdrawals, yet, Blade Hildebrand and Bill Conger #367, who were in 27th as of this morning, aren’t anywhere to be seen. Likewise, Cole Potts and co-pilot Max Eddy #346 would have left from 56th today, but no notes have been recorded on Dakar’s continually updated website. Hopefully, this mystery will be solved when the two cars pull up to the lineup in the A.M.

Those who surely won’t be starting the race tomorrow, and were noticeable absent in today’s special, will be Robby Gordon and teammate Kellon Walch (#316), whom chose to pull out of the race for reasons which sound more like gossip than fact. Some assume it was due to car issues the team had experienced during Special Stage Three, but in a quote offered by Gordon himself, the truer cause for abandoning ship might have more to do with frustration:

“With the rule limitation they have on our car we had to remain at half throttle and play the speed control game. It’s very disappointing they have this rule on us. It wasn’t so bad yesterday as it only hurt us a little bit, but I wasn’t prepared for this today. We got passed by some pretty slow cars doing 50 mph faster than we were, and there’s nothing we could do about it.”

It can’t be said enough: Dakar is full of surprises. The moment you become comfortable with one prediction, an incident or a player spins your expectations in a whole different direction. Maybe that’s why we can’t get enough of it. Competitors, assistants, media and enthusiasts alike binge through news coverage, social pages and tv spots likes junkies on a rally bender. Why? Because no drug gets your heart pumping quite like adrenaline.

Visit the RDC Rally Raid section of the forum to join the discussion about the 2019 Dakar.