Another day of the Dakar and yet another round of changes in the standings. Stage 4 shook up the competitors with big changes in landscape, gone were the massive dunes they’d been racing through and into big open valleys filled with massive silt beds (fesh fesh) that can and would swallow cars whole.

Leading the cars into the marathon stage was Nassar Al-Attiyah followed by Stephan Peterhansel just minutes behind. The two would swap starting positions and remain there for the rest of the stage. “I’m quite happy today.” Said Al-Attiyah. “We won the stage, but there is perhaps still a faster car out there. It was very important to catch Stéphane and stay with him all the way. Yeah, I’m quite happy. Everything is ok – there are no problems. There is still a long way to go. Me and Stéphane we are in the lead now and I’m quite happy, we’ll just keep going like this.”

After getting lost on Wednesday, Ricky Brabec more than made up for it Tacna. Brabec was victorious on the first marathon stage and also moved into the lead in the general standings.

“I needed it.” Said Brabec. “Yesterday was tough on me and I lost a lot of time. Today I really, really needed to push with the marathon night and motocross start tomorrow. It kind of helps me because tomorrow I can kind of just hang back and have the stage under my control and finish where I want. With the motocross start it makes it easy to manage. That’s my plan for tomorrow and I’m really happy with today and getting the stage win as well as making up a bit of time.”

Mathias Walkner was strong all day but in the final few kilometers had a mishap that may end his Dakar dreams of another title. “My ankle feels quite hurt.” Said Walkner. “Fifty kilometres before the end I did a big jump and landed heavily. First I was thinking, ok, maybe it’s broken. It’s really painful now, but we will see how it is tomorrow and I’m going to put some ice on it. It was ok in the end [for the marathon stage], because I didn’t crash and the bike is running well, plus we are like a big group and a team and we help each other, so everything is good.”

In the truck category, the Kamaz Masters dominated the marathon stage as Andrey Karginov took the win with a time of just over 4 hours and 9 minutes, with Martin Macik (Big Shock Racing) trailing by 1.5 minutes. Fellow Kamaz Master and race leader Eduard Nikolaev recovered from a problem on the 27km mark, clawing his way back to third ahead of fellow teammate Dmitry Sotnikov. 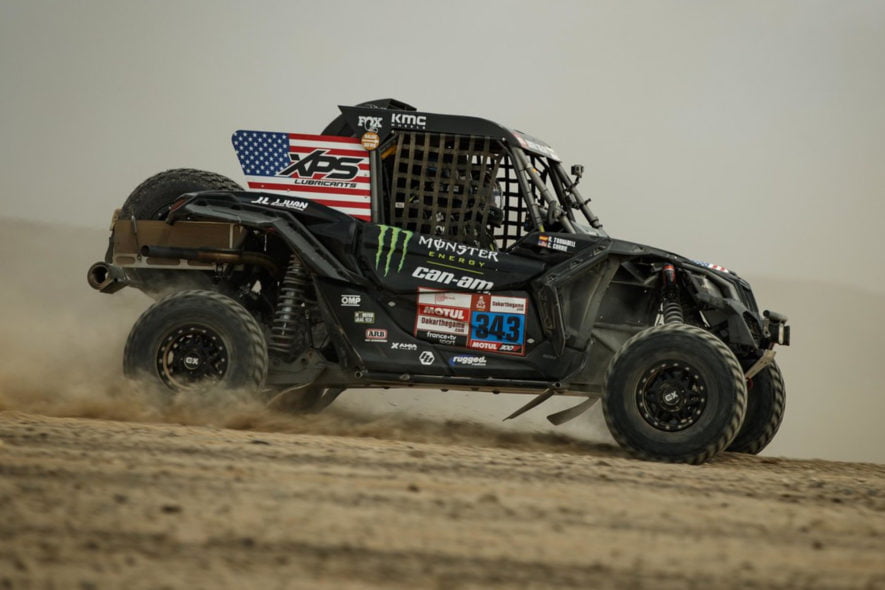 The rest of the cast of USA competitors, Casey Currie had somewhat of a tough day currently in ninth place in the UTV category but nowhere near the day that Robby Gordon found himself in. Currently Robby and the other Textron’s are listed as withdrawn from the rally by the organizer for missing the start deadline. Although Robby, Cole and Blade all ran the stage they had problems in the silt and mechanical issues as well. Robby made it to the finish but the others were still out on course.

Andrew Short has another consistent run in the bikes landing just outside the top ten in eleventh spot overall with fellow USA riders Skyler Howles in 22nd, Garrett Poucher in 64th and Nathan Rafferty in 71st.