In just a few weeks, the Dakar Rally will start a new chapter: after several editions in Africa and South America, this year’s rally takes the crews through Saudi Arabia. In total, they will cover a distance of 7,500 km, of which roughly 5,000 km will be against the clock. The route leads through almost the entire desert area in the Arabian country.

These figures show that the 2020 race will be the longest Dakar – in terms of timed kilometres – for ten years. The move to Saudi Arabia and the fact that 100 % of the routes are new mean all the competitors are starting from scratch. The crews will cover far more kilometres per day than in recent years. This not only makes the days longer, but also more tiring for all involved: after all, even after the MINI desert racers arrive at the bivouac, the mechanics must still prepare them for the next day.

Nine MINI desert racers line up in Jeddah
Seven crews will start the rally with X-raid. As previously announced, Stéphane Peterhansel and Carlos Sainz will each drive a MINI JCW Buggy. Jakub “Kuba” Przygonski / Timo Gottschalk and Orlando “Orly” Terranova / Bernardo “Ronnie” Graue will, like last year, each line up in a MINI JCW Rally. Vladimir Vasilyev returns to X-raid after several years away. He and Ukrainian Vitaly Yevtyekhov will drive a MINI JCW Rally. Saudi Yasir Seaidan will also drive a MINI JCW Rally, alongside his Russian co-driver Alexey Kuzmich. Aleksandr Dorosinsky and Oleg Uperenko are set to make their debut for the X-raid team in a MINI ALL4 Racing. While all of the 4×4 crews will, in part, race under their own team name, they are all putting their faith 100 % in the service provided by X-raid.

Boris Garafulic has been forced to cancel the Dakar at short notice. The reason for this is the unrest and tense political situation in his native Chile.

Additional Dakar participants competing in a MINI JCW Rally in Saudi Arabia are the Russian Denis Krotov and the Ukrainian Dmytro Tsyro in the MSK Rally Team, as well as the two Lithuanians Vaidotas Zala and Saulius Jurgelenas in the “Agrorodeo” team.

As well as profiles of the drivers and co-drivers, you can also find more photos on our photo server at www.dakar.photos

Amendments to the sporting rules
A number of amendments to the sporting rules were also announced in advance of the rally. As was tested at the Rallye du Maroc, the roadbook for the Dakar Rally will be in colour. The roadbook is the most important tool for the co-drivers. They must use the distances, arrows and symbols in it to find the best route. Previously, co-drivers have been given the roadbook as they entered the bivouac after a stage. They are then able to prepare it as they wish. The co-drivers spend hours noting the most important information in different colours. However, the co-drivers will now receive a roadbook that has already been marked in colour by the organisers. This is intended to save time and relieve the amount of work involved, particularly for the amateurs, who often arrive late at the bivouac. On six days, the crews will only receive the roadbook in the morning, shortly before they depart, and must use the information provided spontaneously.

At many rallies, competitors in the motorcycle and quad categories must complete a 15-minute fuel stop. This now applies to all categories at the 2020 Dakar. In enforcing this stop, the organisers would like to increase safety, as it means the cars will no longer be able to catch up with the quads and motorcycles as quickly. This will, in turn, reduce the number of overtaking manoeuvres. 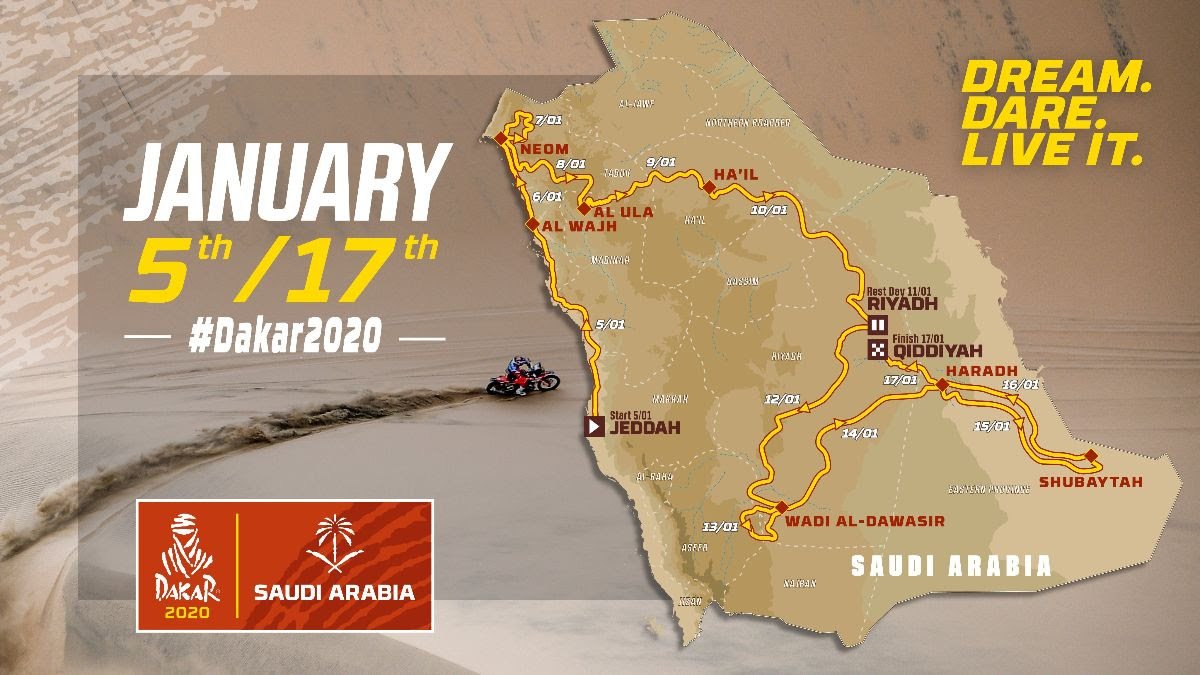