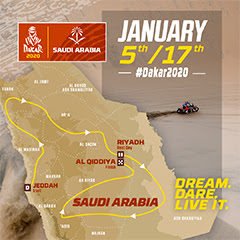 SAVE THE DATE
After 30 years of discovering the beauty of Africa and a decade of adventure exploring the spectacular landscape of South America, a new chapter in the history of Dakar will be written as the world’s biggest rally makes its Middle East debut in Saudi Arabia.

Jeddah, the economic heart of the country, will host the start of the rally, launching a journey of more than 9,000 kilometres to the future Qiddiya complex, not far from Riyadh, where the rest day will take place.
Totally 12 stages on this vast country and its mosaic of deserts, mountains, canyons, valleys and coastal landscapes.

Discover the chapter 3 on video 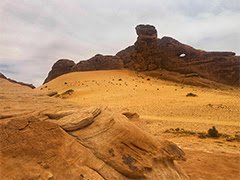 A TOUR OF SAUDI ARABIA
Saudi Arabia stretches over more than two million square kilometres —about four times the surface area of France. The largest country in the Middle East, whose population is concentrated in the towns and cities close to the sea, boasts a mosaic of landscapes that will put Dakar competitors through their paces on all fronts: driving and riding, navigation and endurance. It is a call to adventure.
More information

ANDRÉA AND STÉPHANE PETERHANSEL
“When you’re a rally-raid driver, you enjoy racing and discovering new things. This is what the Dakar’s all about. 25 years ago, I rode a rally raid in the Saudi desert on a motorbike. I saw dunes, lakes… It was amazing.”

LAIA SANZ
“Turning over a new page can only be a good thing, and I’m really motivated to discover new deserts. South America will always have a place in my heart, but the Dakar goes on.”