Dakar is Coming: What to Expect From the World’s Largest Motorsport Event – race-deZert.com

Eleven days from now the Dakar will start on the tree-lined streets of Buenos Aires, Argentina for a two-week 9,000km+ (5,600miles+) loop of South America. But such is the sheer level of difficulty that only seasoned men (and one woman) who know every detail of the event inside out can hope to win.  Ones have spent years and years being beaten by the nuances of the shifting sands and learning how to eek seconds out of a blind course. Only two rookies have won (in the 80s). Their names are Vatanen and Kankunen.  The first thing to expect – no surprises! 2015’s story began at the end of last years event when X-Raid team boss Sven Quandt issued team orders that almost certainly cost Stephane Peterhansel his 12th victory. The French legend was so non-plussed that despite the MINI being pretty much the only car to have, he left and signed up with Peugeot. The big news manufacturer-supported 2008 DKR looks absolutely stunning. It’s much bigger than you would imagine.  It’s Escalade size, not MINI, and has a 3.2 twin turbo V6 diesel.  It was a quarter of a century ago that the stretched 205 and 405 T16s won and those victories came on the other side of the world, so the team is effectively starting from scratch… and the Dakar doesn’t reward rookies nor does it favor rear wheel drive cars, which the new Peugeot is. 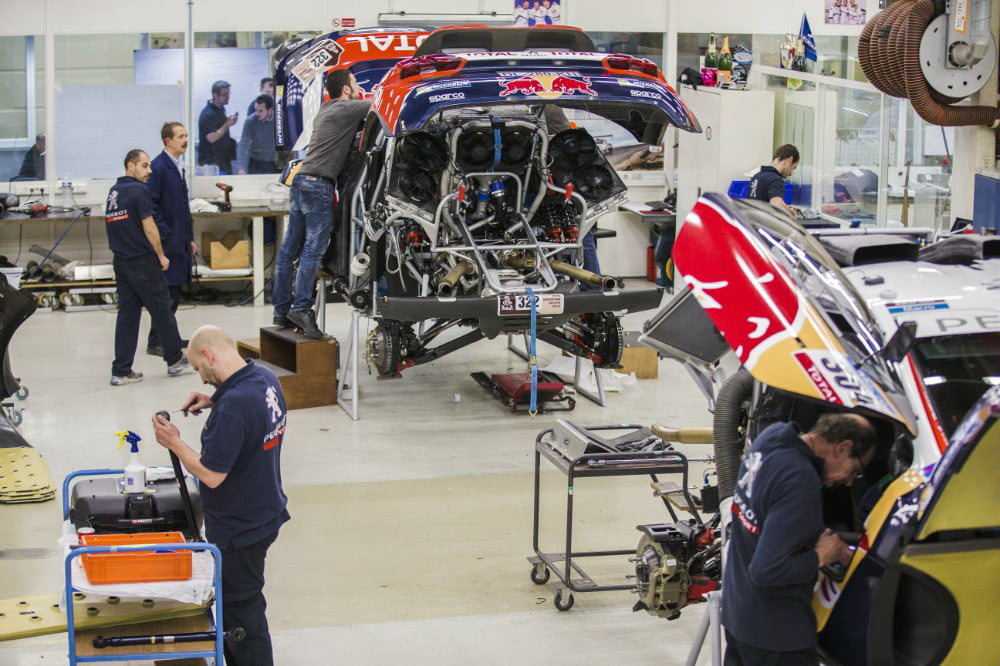 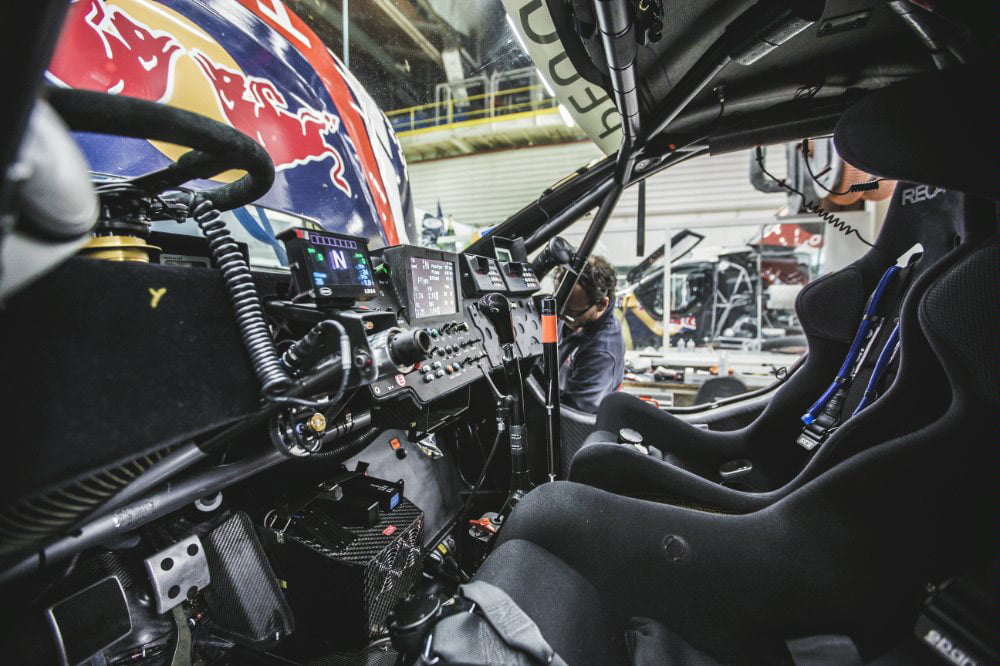 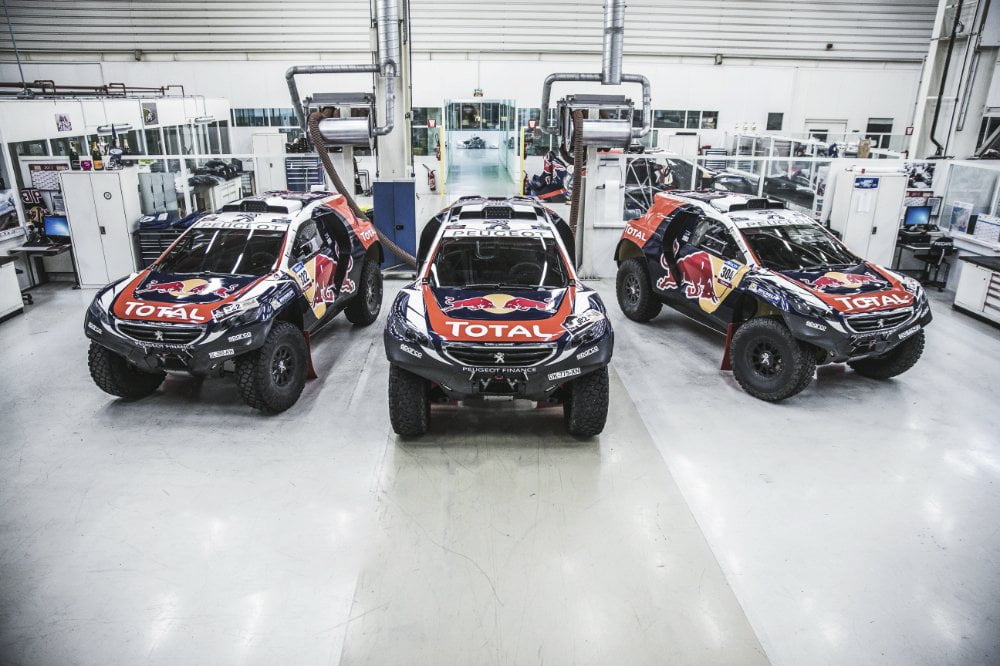 There are some advantages to not having a front axle, such as having more front suspension travel and CTIS (central tire inflation system) which allows the driver to adjust the wheel pressures at the flick of a switch. But a quick glance at the map and you can see that at least half the event is WRC style stages across Argentina, despite crews cover the same distance as a WRC event in a single stage. But, when was the last time you saw a 2WD car beating 4×4 machinery on gravel? 1983? Only Jean Louis-Schlesser has won in a buggy and that was when the event was run through the Sahara fifteen years ago.

Both Peterhansel and two-time WRC world champion, and 2010 Dakar winner, Carlos Sainz are incredible drivers and Peugeot has invested more money into this project than you would think feasible but something serious would have to happen to the MINIs for them to have a chance, this year at least. Also, keep an eye out for third driver, ex-biker Cyril Despres, in the next couple of years. After 4 wins on two wheels he is following in the wheel tracks of Peterhansel and the current champion Nani Roma in having a co-driver beside him to do half the work. We may have not seen the big dakar podium for Robby Gordon in his own creation the Gordini yet but he is without a doubt a star of the show.  It says a lot about the calibre of the other teams and drivers when someone with such talent and history as Gordon is considered the underdog. In a straight line it’s an insanely fast car but I don’t think the Gordini is enough of an all-rounder to be a contender for anything other than a few stage wins. I hope he’ll be able to mix it up with the Peugeots though… and there’s certainly no love lost between him and Peterhansel.

I have had the pleasure of standing next to the track in places like the Mint 400, Baja 1000 and his signature series Stadium Super Trucks and there is definitely something special about the bright orange Speed Energy trucks coming tearing past. Also, there is a persistent rumor that there will be a second Gordini in the event? BJ Baldwin perhaps, or if he promises to be careful of all the cacti maybe Sheldon Creed?

Toyota has an excellent car in the Toyota South Africa and the Overdrive Hi-Lux’s.  A few new rule changes will be a great benefit. By repositioning the spare wheels under the cockpit and behind the seats there is now more weight between the axles instead of over the rear, which will make it handle better through the twisty sections.  An increase in the restrictor plate diameter will mean that the 2nd and 3rd places of recent years will have a realistic chance of being improved on. South African driver Gilles de Villiers is a former winner and has been the most consistent driver in the past decade. With more speed and control he should be more of a threat. We’ll see what they can do in the first few stages.

RDC featured driver Benediktas Vanargas from Lithuania has upgraded from an Oscar to an almost full-bloodied and stunningly wrapped Hi-Lux and has given me a place in his support team, so we’ll be following his progress. Only the best drivers enjoy the newest developments though so he is in last year’s spec, but is never the less hoping for a Top 10 place and is so serious about the event that all the cars in the team have Dakar numberplates from Dakar1 to Dakar5! We’ll have more about his team soon.

The sticker on the back of Gordon’s Hummer used to say “MINIs are for girls” but since the departure of the VW team to the WRC, the X-Raid MINIs have ascended to Dakar dominance, although of course the Dakar version only shares a bit of chrome trim, the badge and the windscreen wiper arms with the production model. Peterhansel has taken two wins in it and last year Spaniard Roma became another ex-biker to win in both bike and car categories. Now he knows whatever he needs to say to Quandt to slow the other drivers down, so expect him to be near the front again this year. But with a drive and determination to match even Robby Gordon is Qatar’s Nasser Al-Attiyah. As a child he had to walk 10 miles across the desert to school everyday, barefoot.  He has an intrinsic feel for sand. He was part of the best two fights in recent memory, when he was with Sainz in the VW team and now he is back with X-Raid, which adds up to a formidable combination.

Who else to watch? A very fast driver is Saudi Arabia’s Yazeed Al-Rajhi in an Overdrive Hi-Lux, the two local drivers Orlando Teranova in a MINI and Lucio Alverez in a Toyota are getting more confident and faster on home territory every year. Carlos Souza won the first stage in a Great Wall last year but retired the very next day. He is in the first of the reliable Mitsubishis and seeded 9th is France’s number two driver Christian Lavielle in a Toyota. Perhaps you would expect some more X-raid drivers to do well, but most are there thanks to budget rather than merit. Apart from Al-Attiyah, Roma and Terranova only Poland’s Krzysztof Holowczyc (yes, I had to Google that spelling) really has the possibility of getting in the Top 10, although in 10 years he has one stage win and a 5th place to his name.

Two Poles will also be there or there abouts. Ex-biker Marek Dabrowski in an Orlen Toyota has been very impressive in the FIA rally-raid series in Europe and the Middle East and former downhill ski Olympic medallist Adam Malysz has bought Sainz’s SMG buggy that was leading the rally at one point last year.