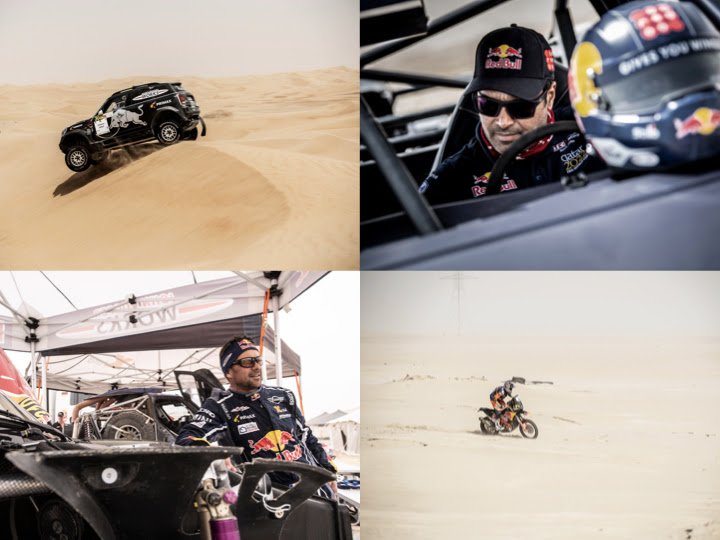 Dakar Rally heavyweights are leading in the pack at the midway point of two separate cross-country events. 13-time Dakar winner Stéphane Peterhansel (FRA) is out front at the Abu Dhabi Desert Challenge, assisted by his wife Andrea (GER) as co-driver. Meanwhile, over in Morocco at the Merzouga Rally it’s current Dakar champions Nasser Al-Attiyah (QAT) and Mathieu Baumel (FRA) who lead the SxS contest.

The first two desert stages in Abu Dhabi have been dominated by minimal visibility, huge drops, relentless wind and soft sand. Expert driving and navigation from the Peterhansel husband and wife crew have given them a 2m26s lead over second placed Bernhard ten Brinke (NLD) after nearly 500 kilometres of desert racing.

“It was a complicated stage and we saw a few cars ahead struggling and getting stuck, so we played it safe.” – Stéphane Peterhansel, MINI John Cooper Works Rally driver

Among the cars getting stuck in the soft sand on the second stage was the MINI John Cooper Works Buggy belonging to Cyril Despres (FRA). Despres, racing alongside co-driver Dani Oliveras (ESP) for the first time, won the first stage of the Abu Dhabi Desert Challenge. However, a huge stoppage on the second stage looks to have ended this duo’s chances of victory this time around.

The second MINI Buggy in the race is under the control of Kuba Przygonski (POL) and co-driver Timo Gottschalk (GER). A pair of fifth place finishes on the opening two stages have put this crew fourth overall, with sights still set on an overall podium finish.

The bike contest at the Abu Dhabi Desert Challenge is currently being led by 2017 Dakar winner Sam Sunderland (GBR). The Red Bull KTM Factory Team rider shot out of the blocks on day one to build a lead of over six minutes. But with winds of over 30kph churning up the sand and reducing visibility on the second stage, Sunderland’s job of opening the road was a tough one. After two stages the British rider’s lead has been cut to less than a minute.

“The conditions are tough so I’m focused on doing my best to get a good rhythm throughout and avoid mistakes where possible.” – Sam Sunderland

Meanwhile, over in Morocco at the Merzouga Rally there’s been a flying start by reigning Dakar champions Al-Attiyah and Baumel who are setting the pace in the SxS contest. It’s the first time the duo have entered a SxS race, and so far they seem to be adapting very well to the new discipline.

“I’m delighted to be here. This rally has already proved its worth, and it’s an opportunity for me and Mathieu Baumel to experiment with a side-by-side. We’re really excited about this new adventure.” – Nasser Al-Attiyah

Al-Attiyah and Baumel will be aiming to close out victory on Friday, April 5 with four stages still reamining in Morocco. The Abu Dhabi Desert Challenge concludes on Thursday, April 4 at the Yas Marina Circuit with three of the five desert stages still to be raced.

Stéphane Peterhansel: “It was a complicated stage and we saw a few cars ahead struggling and getting stuck, so we played it safe and went not too fast. There was still a lot of wind which makes the dunes difficult and leading the cars for the stage was a new experience for my wife as there was no tracks to follow.”

Sam Sunderland: “The conditions are tough so I’m focused on doing my best to get a good rhythm throughout and avoid mistakes where possible.”

Nasser Al-Attiyah: “I’m delighted to be here. This rally has already proved its worth, and it’s an opportunity for me and Mathieu Baumel to experiment with a side-by-side. We’re really excited about this new adventure, even more so knowing that the frame of mind of all the people here guarantees we’ll have a good time. There are also some things we aren’t used to, such as getting the roadbook in the morning. It’ll be a valuable experience.”