Sainz scorches to a second stage win while Sunderland crashes out 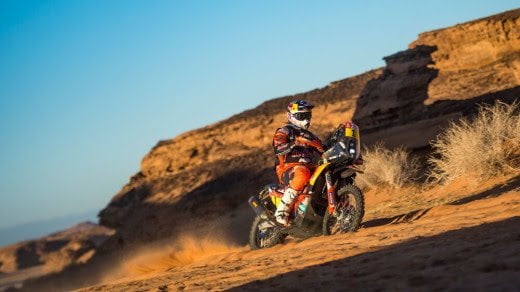 The 2020 Dakar Rally really started to take shape on a wild Stage 5 which was dominated by sandy terrain. Carlos Sainz, Toby Price, Cyril Despres and Dmitry Sotnikov all bagged victories but Sam Sunderland suffered a heavy crash and is out of the race.

With the Rest Day in Riyadh now just one day away, we’re witnessing world class off-roaders going full speed at the 42nd edition of the world’s toughest rally.

– Spaniard Carlos Sainz continued to stamp his authority on the car race by winning his second stage in Saudi Arabia. The win moves the 2010 and 2018 champion six minutes clear of Nasser Al-Attiyah who remains his closest competitor. Stéphane Peterhansel opened the stage and came home third to remain in contention, 18 minutes back.

– “Sainz said: “The last part was fast and bumpy. We managed to catch Nasser (Al-Attiyah) in this section. We finished the stage together. We’re all pushing hard and doing a good job so far. The car is working well.”

– Toby Price also claimed a second stage win after an immaculate run on Stage 5. The two-time Dakar winner has sprung up the leaderboard to second and now trails leader Ricky Brabec by nine minutes.

– Price said: “The first part of it was stones and rocks again, but towards the end we were in the sand dunes. This made the navigation tricky. I got caught out by one square edge that kicked me off. Luckily I was able to get back on and I’m looking to stay healthy for the rest of the race.”

– Red Bull KTM Factory Team rider and 2017 champion Sam Sunderland crashed out of the race 187km into the timed special, suffering back and shoulder injuries. His teammates Matthias Walkner and Luciano Benavides fired up the rankings though to end the day sixth and eighth respectively.