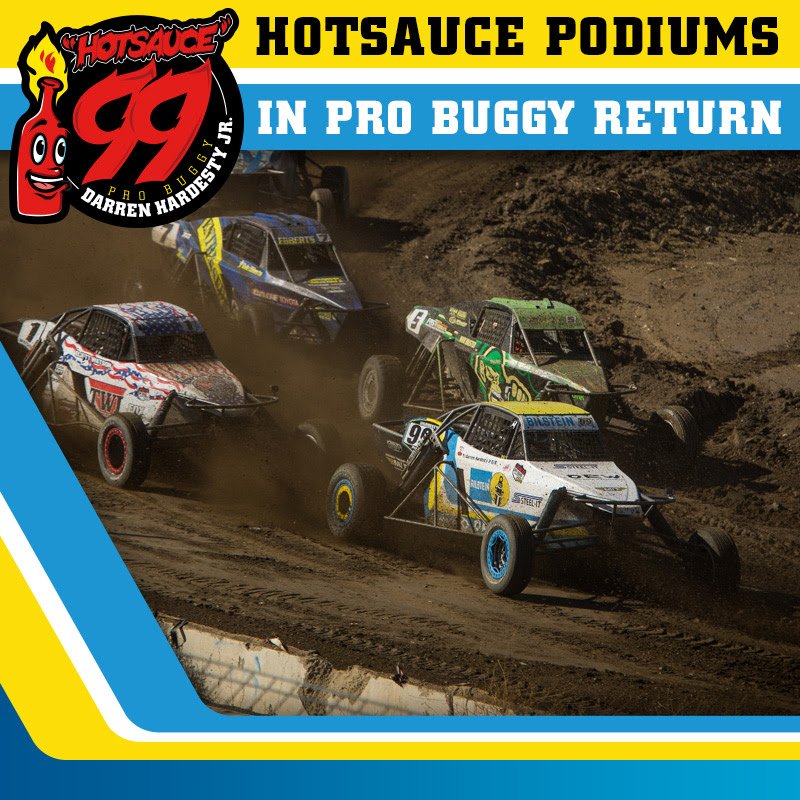 After a one year hiatus, former Pro Buggy Champion Darren “Hot Sauce” Hardesty Jr. returned to the Lucas Oil Off Road Racing Series (LOORRS). He was able to make a significant impact in the opening rounds. Racing the #99 Bilstein  Alumi Craft Buggy, Darren’s highlights of the weekend included qualifying on the pole and taking a 2nd place podium finish in Round 1. 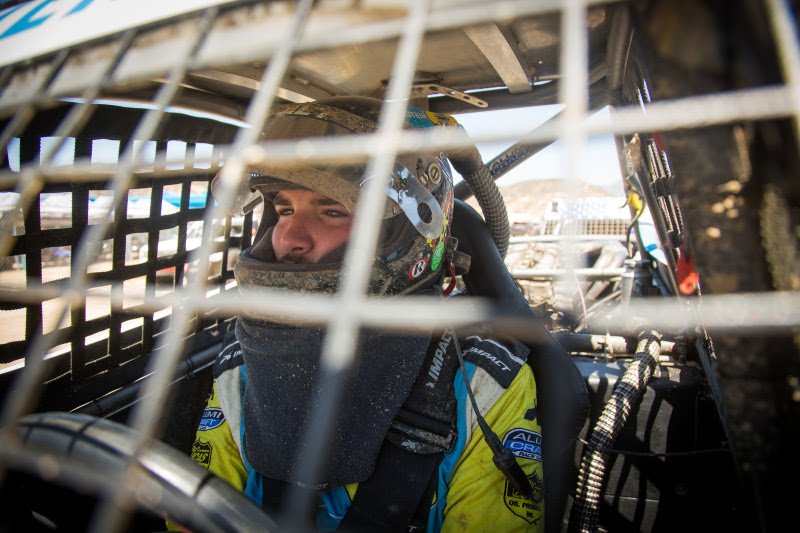 LOORRS Round’s 1 & 2 held at Glen Helen Raceway in San Bernardino, California, featured the OPTIMA Batteries SoCal Shootout Presented By K&N Filters. It would be Hardesty’s first national event in nearly 20 months, but Darren honestly looked as comfortable as ever. Coming out of the box swinging, Hardesty put down the fast lap in Practice Session #2, and went on to back it up by setting the fast lap in Round 1 Qualifying. The quick time of 51.062 seconds and a top speed of 70.503 MPH set Darren up for a front-row start.

Darren settled into 2nd place after the start, but on the opening lap in Turn 3, the only right-hand corner on the entire track, #99 Pro Buggy slightly overrated and fell back into 3rd place. You might think Hardesty would be a little rusty racing short course off road, but Darren has been keeping his skills sharp and refined, turning many laps on his high-tech iRacing Short Course Simulator. Additionally, Hardesty picked up a pair of wins in his Alumi Craft Pro Buggy recently at Glen Helen during the Lucas Oil Regional Off Road Series in June. 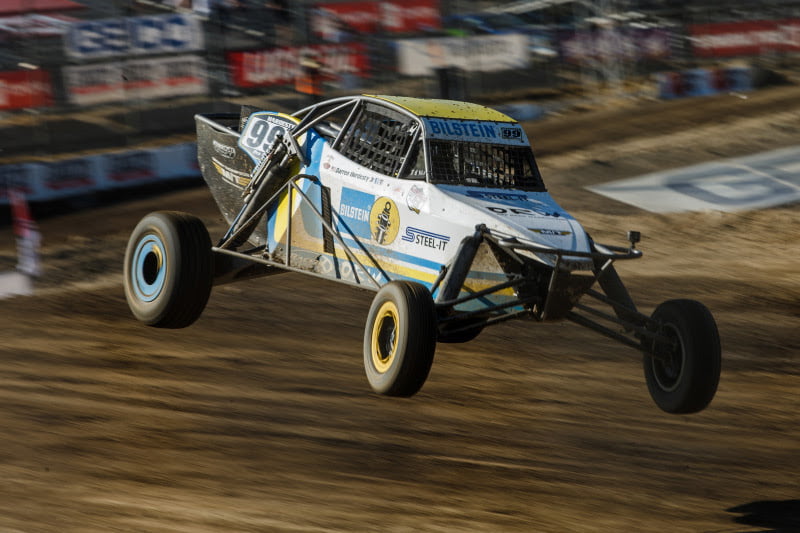 Now racing in 3rd place against a talented field, Darren pushed hard to maintain track position and put the Bilstein car into contention. Everything was clicking at this point, and Hardesty was knocking bumpers on 2nd place (#15 Trey Gibbs). From Lap 3 to Lap 7, the #99 car was the one to watch, putting on the pressure, setting up in the corners and diving in on the next. 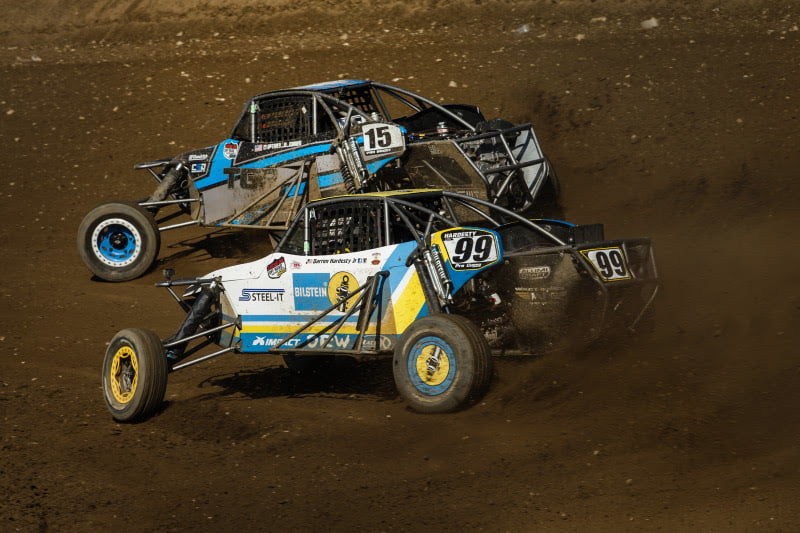 On Lap 8, the Competition Caution came out and the field filed in for a restart only to have another caution and restart come out on Lap 9 for a rolled car in Turn 2.  On the next restart, Hardesty ducked down for a daring attempt at 2nd place again. A three-way battle for 2nd place breaks out, all Alumi Craft Race Cars of Gibbs Hardesty & Watson, and after a little dicing back and forth, Darren emerged in 2nd place with Watson overtaking Gibbs for 3rd. The Pro Buggy class is closely matched in nearly every aspect. It is a mere driver skill that can provide an edge over the competition. Hardesty demonstrated his patience to take home a well earned 2nd place podium finish. 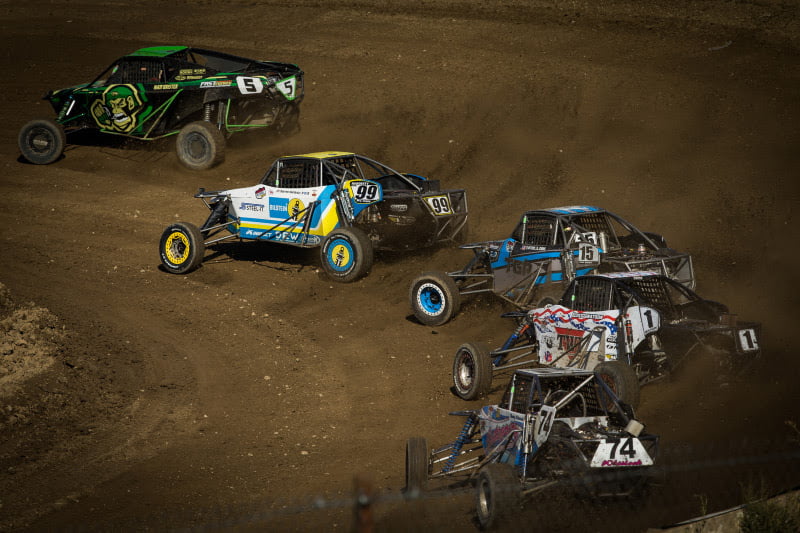 For Round 2, Hardesty would score a 3rd fastest qualifying lap time and position himself in the front row for the race start. Darren hit all his marks and performed like the former champion was on track to race for a potential win, but unfortunately lost a tire off the bead on Lap 2. Hardesty would turn into the hot pits for a quick tire change and stayed in the race but finished a lap down in 8th place.

Darren’s effort for a top Round 1 qualifier and 2nd place finish puts him in 4th place in the Pro Buggy 2020 Championship with 92 points earned on the weekend.

“The weekend was awesome! It was nice being back with our racing family” Hardesty stated. “I learned a lot coming back. The track was pretty bad for practice, so it was tough to get a feel for how the buggy was working. We dialed it in the next day and improved our lap times. We scored the #1 qualifier and I was able to bring home a podium finish for Round 1, so overall I say it was a successful return” 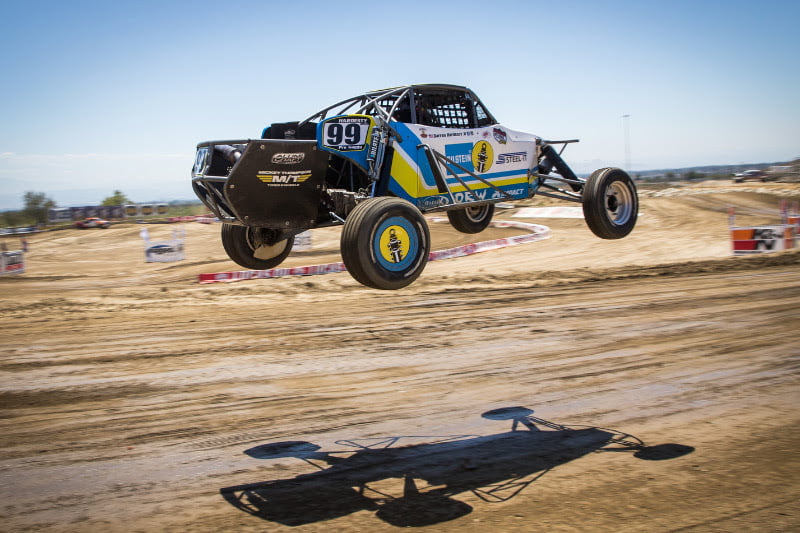 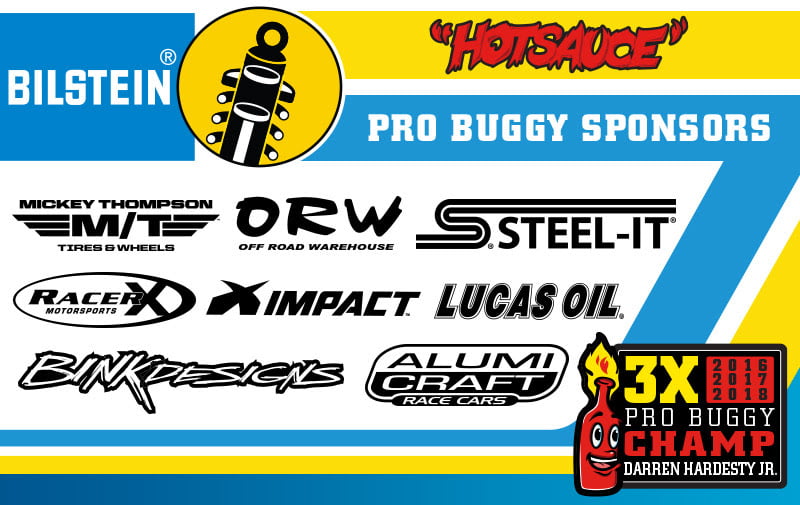 About Darren “HotSauce” Hardesty Jr.
Darren “HotSauce” Hardesty Jr. is a third generation racer who is making his own mark in racing. Working his way up the ladder from JR1 Kart, where he was named “Rookie of the Year” in 2011, he graduated to the fastest kart class in the Lucas Oil Off Road Racing Series,. Racing a Pro Buggy In 2015, HotSauce earned the Rookie of the Year title and the points championship in the Lucas Oil Off Road Racing Regional Series. He gave the pro level series a try and did extremely well; so well that he also ran the Pro series for the rest of the season. He became the youngest driver to win a race in the Pro series and went on the take the Rookie of the Year title; earning his second Rookie of the Year title during the same season. In 2016, he has continued to accrue wins and podiums at the professional level. During his trip to the World Championships at the Big House in Crandon, Wisconsin, he earned a victory and second place podium finish racing against the Crandon regulars. At only 16 years of age, Darren Jr. became the youngest driver to win a pro series championship when he dominated the final race of the series. He vaulted from third place in the standings to a tie for first. Having more wins than his top competitor broke the tie, earning HotSauce the title. Darren’s strong performance in 2016 attracted a huge fan following and a rising star nomination from the Off Road Motorsports Hall Of Fame. He backed up his strong run in 2016 and 2017 with a third straight championship in 2018. Anytime he is in the driver’s seat, it’s guaranteed he will spice things up as his nickname “HotSauce” suggests.