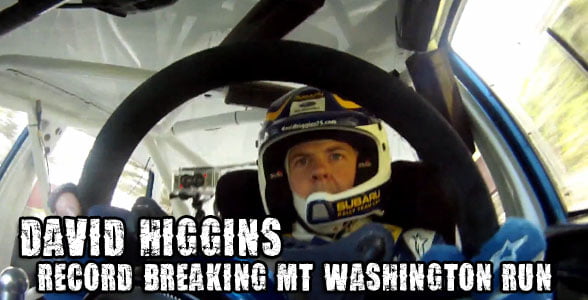 Imagine driving leisurely through the mountains of New Hampshire on a 7.6-mile, tree-lined road made of mixed gravel and pavement and punctuated with random drop-offs. Now, imagine racing up the same mountain road, sliding around corners and hugging cliffs, faster than anyone else in the 107-year history of Mt. Washington’s Climb to the Clouds.

Below is a link to a video that captured Higgins’ record-breaking run, featuring action shots from inside and outside of the car, as well as commentary from the man himself.

First run in 1904, Mt. Washington’s Climb to the Clouds races to the 6,288-foot summit of the Northeast’s tallest peak and is one of the greatest motorsports challenges for both man and machine.  Higgins was the last competitor to race, which thrilled the fans and enthusiasts attending in anticipation of a new course record. On his first attempt, Higgins surpassed the record by more than 20 seconds. On his second attempt, Higgins bested his record by an additional eight seconds, securing his place in the record books.