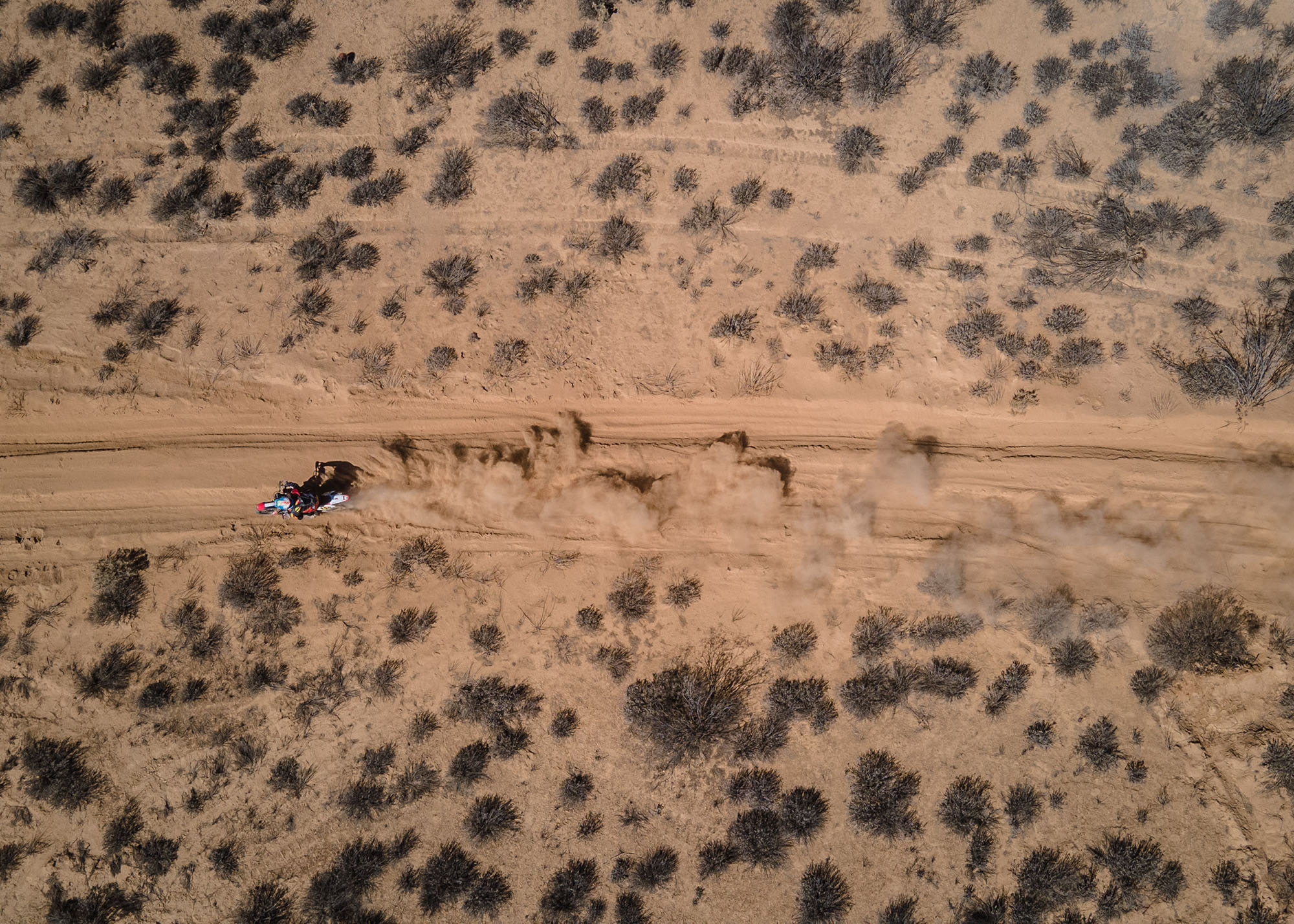 Day 4’s stage of the Yokohama NORRA Mexican 1000 Presented by Method Race Wheels from San Felipe to Guerrero Negro was epic for the motorcycles. They ran 218 total miles on day one from Ensenada to San Felipe, and followed it up with 308 miles total today; 247 in the dirt. They started in the deep sand in San Felipe, traveled through lots of silt, then back in the sand again on the Pacific Ocean side of the Peninsula. The cars ran some of the same course, but turned left to Bay Of LA for the night.

First into Guerrero Negro was Giovanni Spinali, but not how he liked. He suffered a cracked frame on his Yamaha Tenere that needed repairs. Luckily NORRA found a local welder who repaired the damage so he could start the next morning. First to cross the finish line was Matt Sutherland on his KTM 450 rally who built his advantage to 18 minutes over 50+ Vintage Dudes class rider Daniel Bartolucci in second overall. Bartolucci is on a Husky FE 501. Third overall is Matthew Wichgers riding a Honda XR650R. 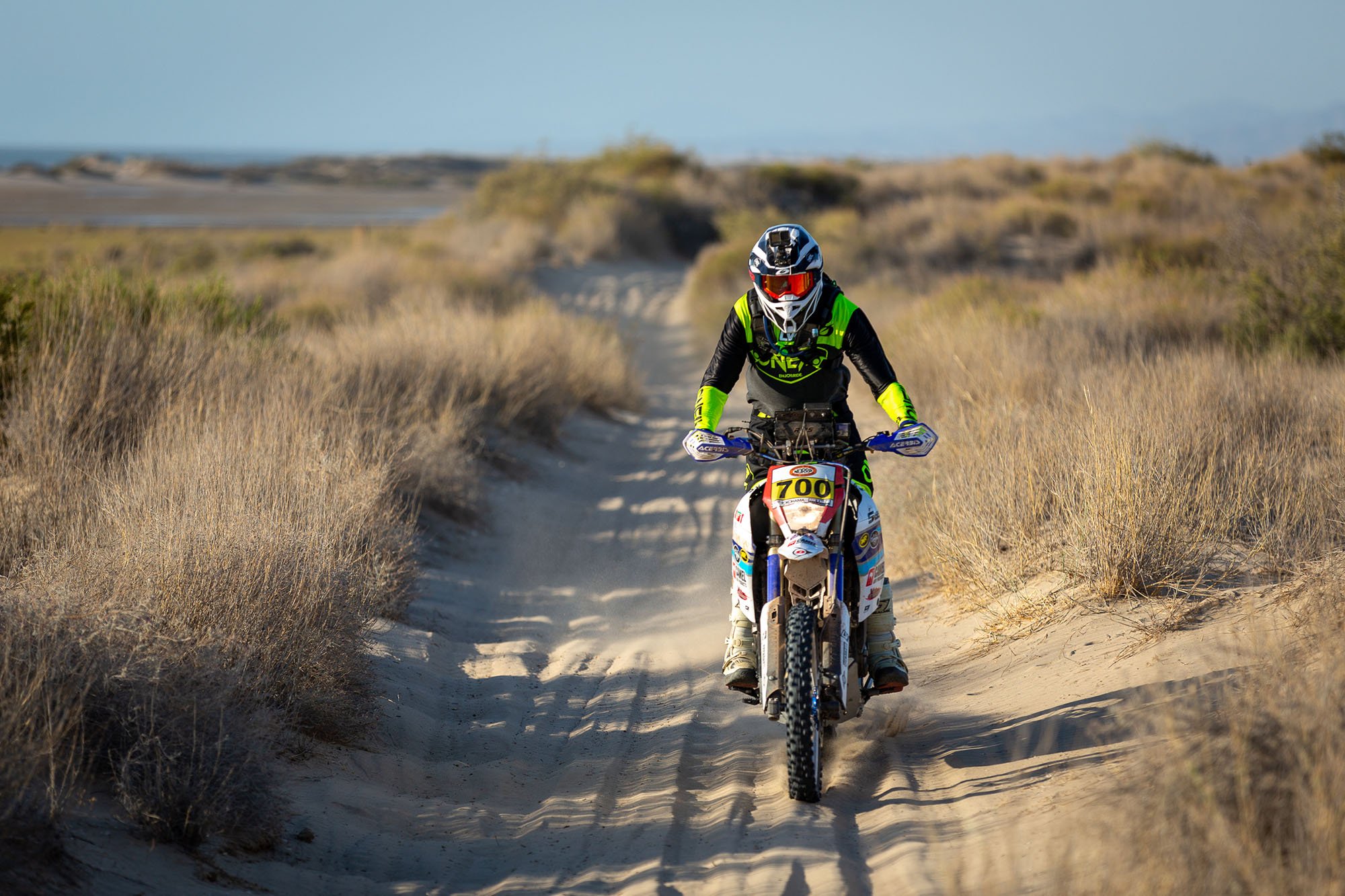 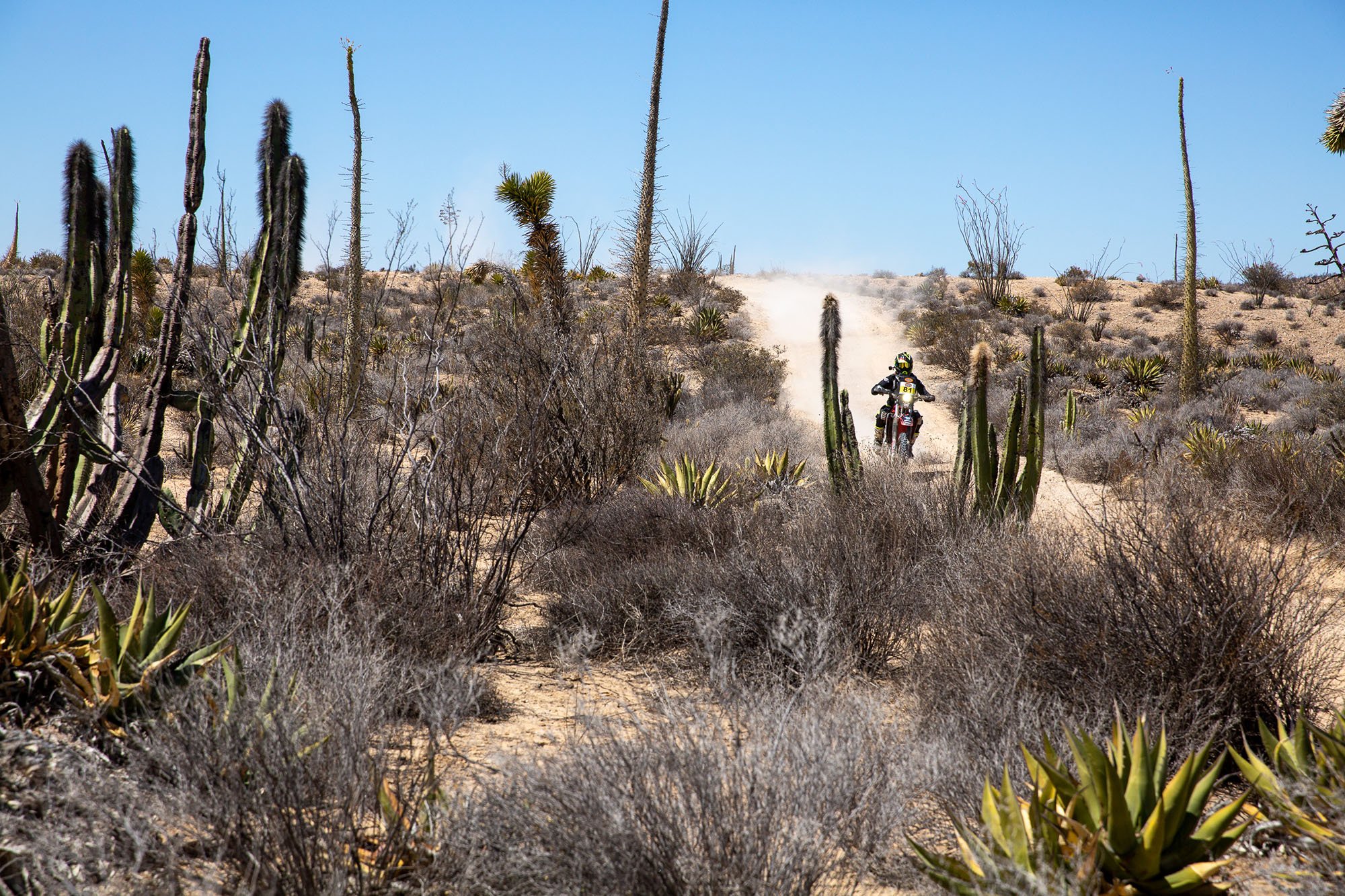 Sutherland apparently got lost on the course for some time which allowed Bartolucci to close the gap. Bartolucci was in Sutherland’s dust at one point, but later on, neither was running first on the road. Road book navigation is tough, and when combined with the physical demands of riding in the deep sand, the skills these riders display is amazing. Alliances made out on the course, as a matter of survival, lead to camaraderie and lasting friendships amongst the competitors. They earn each other’s respect.

Matt Sutherland’s day was up and down. “I learned a lot today. I got out in the lead and made a navigation error. I ended up out on the salt flats; it was super muddy. I then made a further mistake by trying to make up time. About the halfway point I just took a deep breath, calmed down, and started riding smooth and having fun. The morning was high stress. Yesterday was high speed. Today was a solid rally stage.” 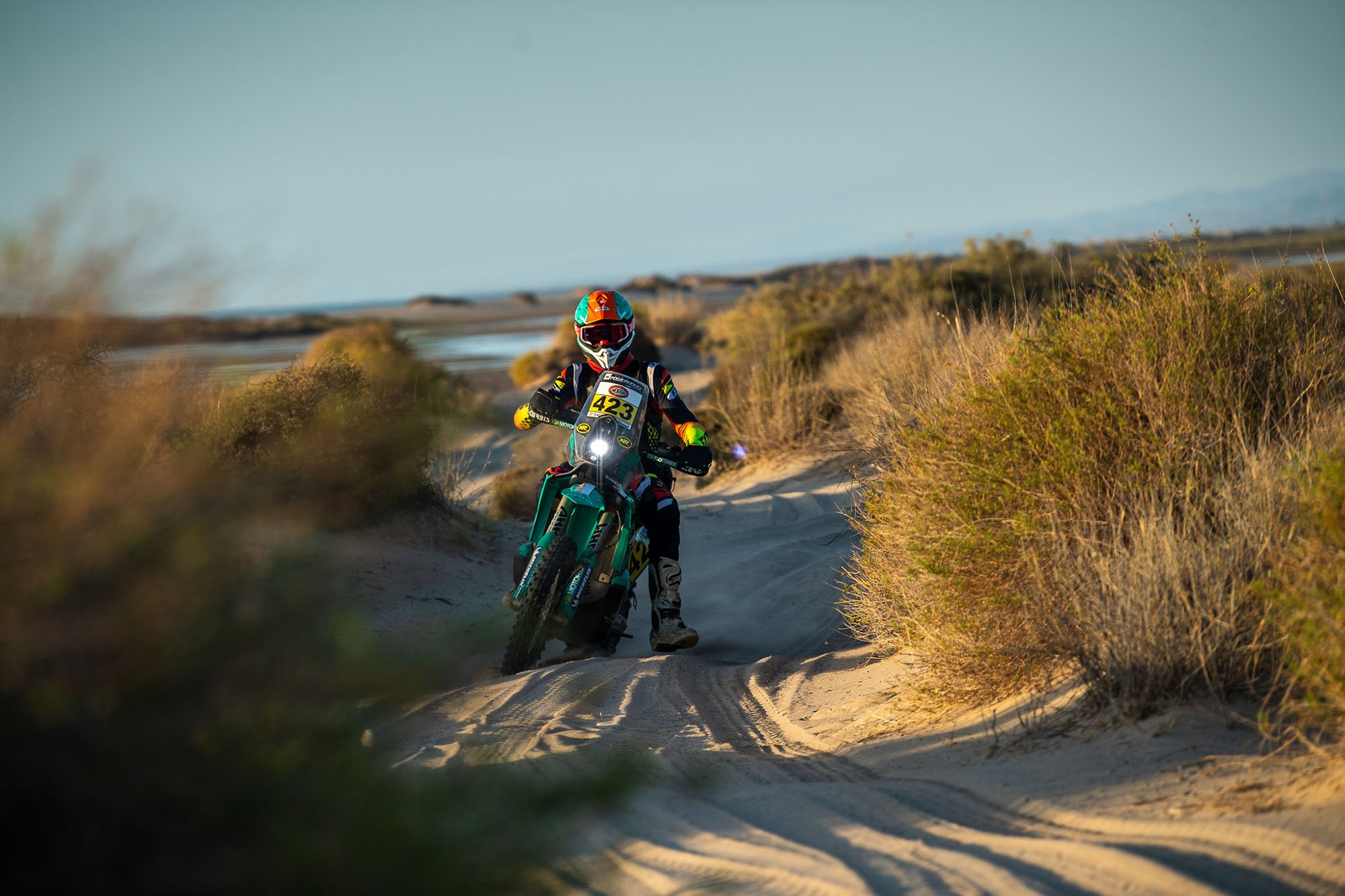 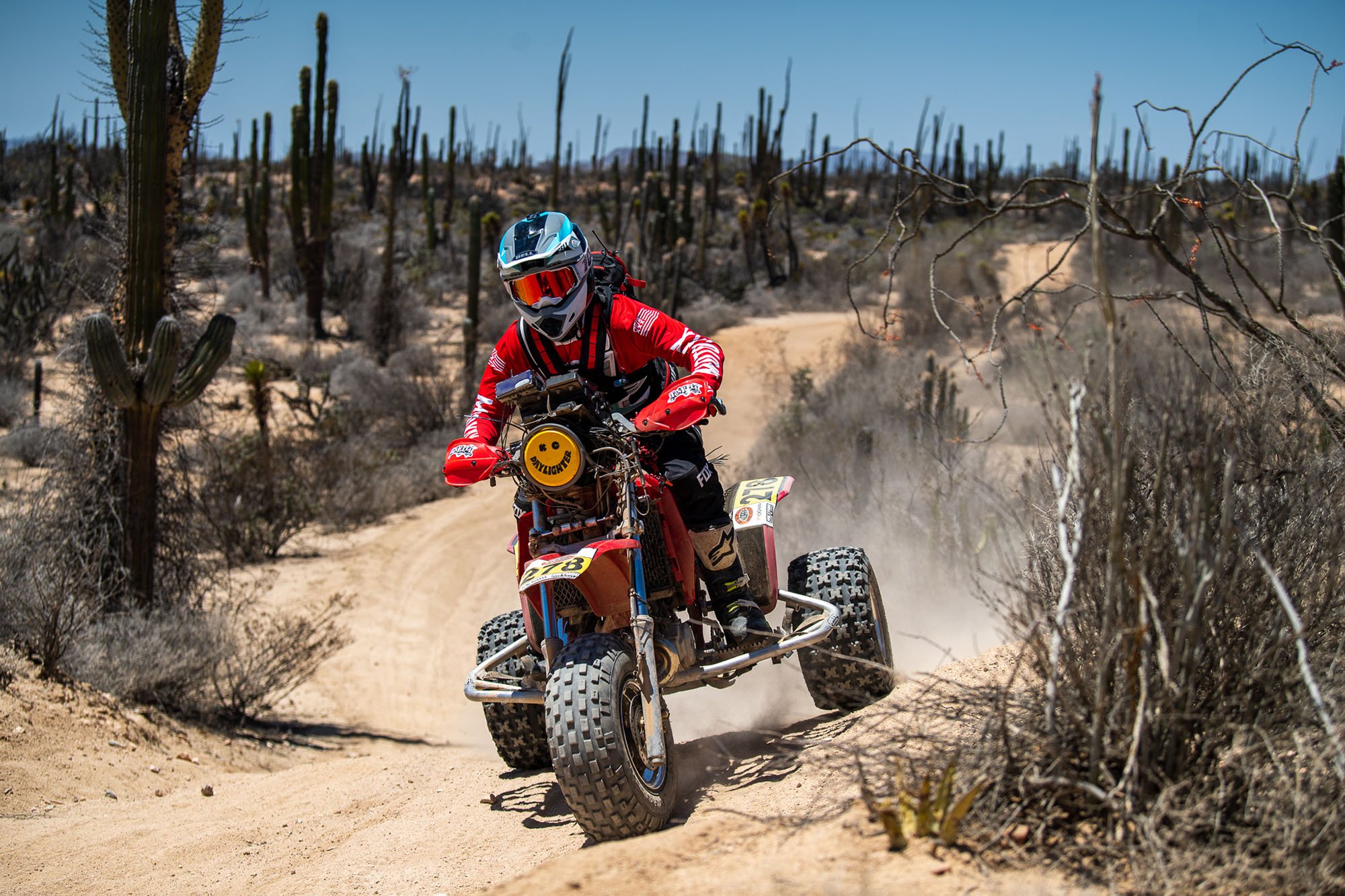 Matthew Glade bike number 55 said the day was excellent, “It was absolutely gorgeous riding on flowy two track with sand and rocks, and the most amazing cactus garden; you were on the beach; it was just all of the things in one day. It was just fantastic!”

Ben Shuckburgh had some problems that cost him about an hour. The second half of the day he had much better luck. He said his favorite part of the course was the sand dunes. “The further south you get, the more varied it gets, and the more beautiful. Each day has its own special charm. Today was a real challenge.”

“It started off well,” said Giovanni Spinali. “In my first section I passed a lot of guys, but I noticed the front end having a lot of play in it. Pretty soon there was anti-freeze all over my right boot. I pulled over and realized my frame was cracked in two places, and the motor had dropped down; pulling off the radiator hose. Luckily I was by the road. I limped out, loaded it into the van and headed here. I got it welded just down the road in a local shop; good to go for tomorrow.” 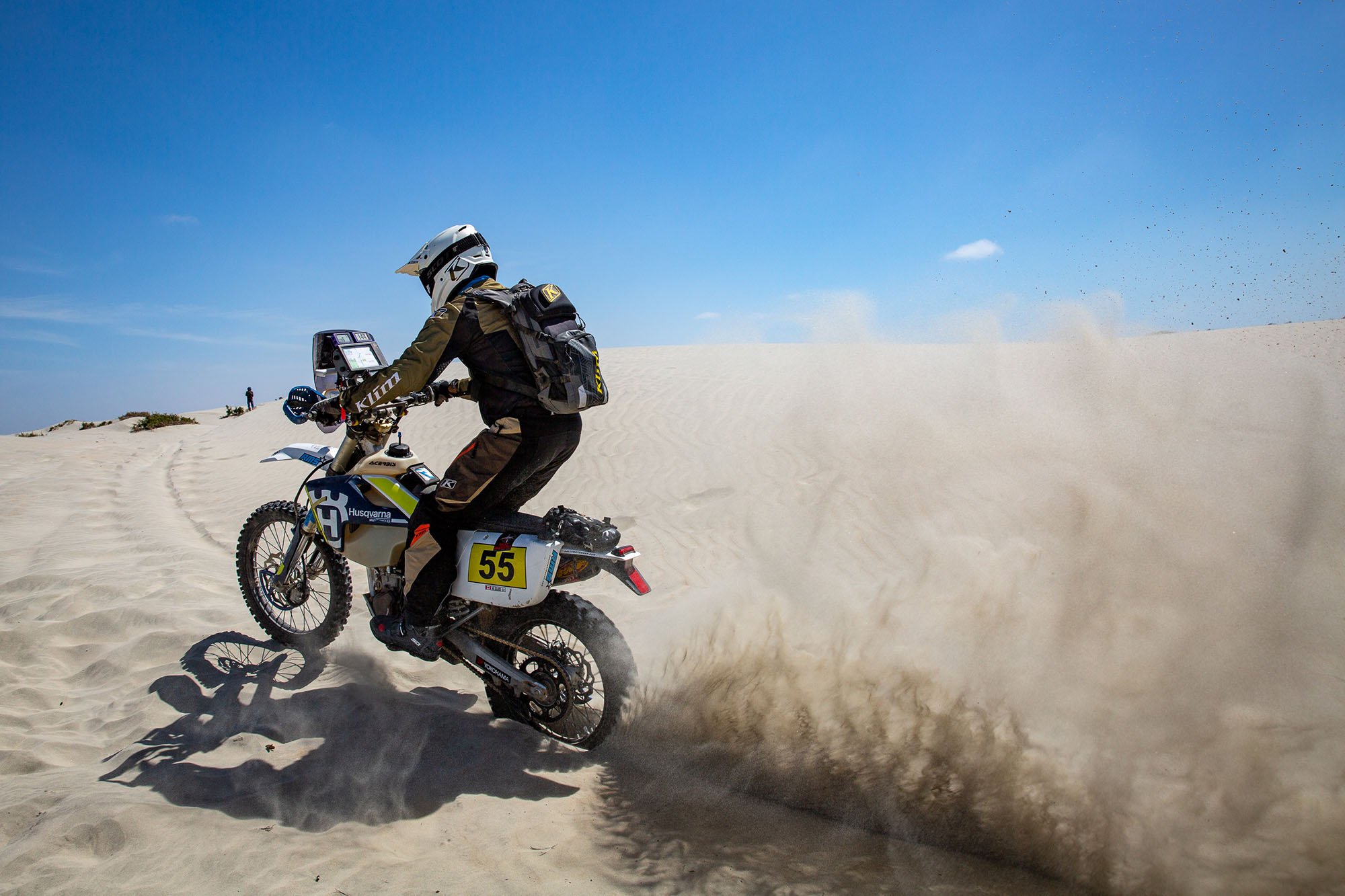 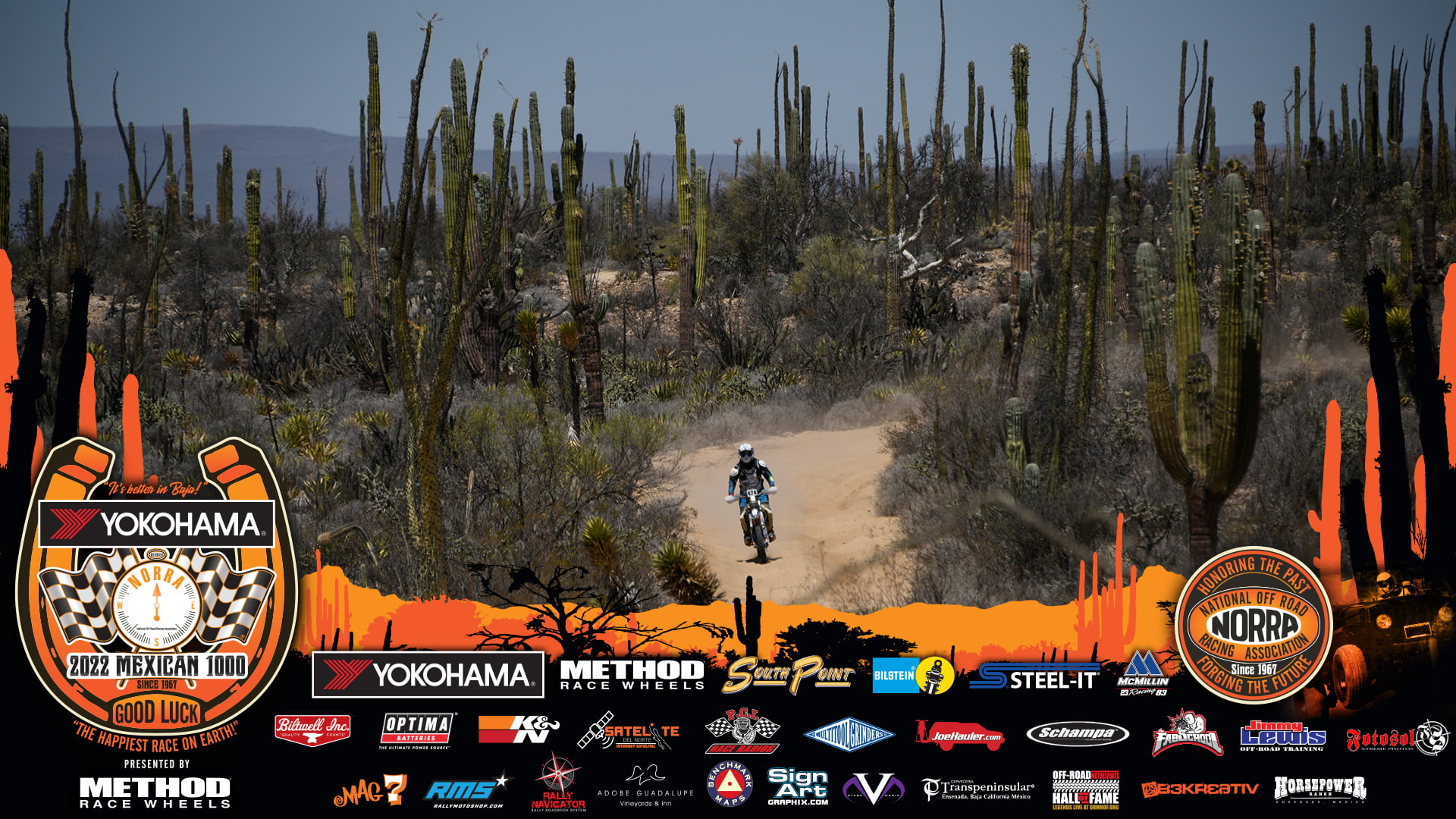 Spinali was not the only one making repairs. Max Gordon told us what his team went through after yesterday’s stage to San Felipe. They had a hole in the engine block. His father Robby drove back to the shop, grabbed another engine and was back around 10:30pm. The crew was up all night changing it, and finished minutes before lining up to take the start. The work was sound as they rolled into the finish in Bay of LA after a solid day of racing.

Dave Mason had a great day taking the win in stage 2. Rhys Millen started first but got passed by Mark Post when the Jakal got a mystery flat. That’s a flat tire you get when you can’t recall hitting something. The desert is filled with things that want to poke you, stab you, or bite you. Post finished first in BOLA (Bay Of Los Angeles) He was making up time after a speeding penalty the day before. The second spot overall was a back and forth battle all day between Zak Langley, and Steve Menzies with Menzies coming out on top. David Sykes had a brilliant day in his Vintage Open Truck class Ford Bronco. He moves into the 4th spot overall. RJ Anderson is 5th overall in his Polaris UTV, and Casey Currie had a great day to move up to the 6th spot overall. “We kind of cruised yesterday with my Dad running right behind us,” said Casey. “We only had 25 miles on the new Pro R. Today I pushed a lot harder, and I think my Dad lost a belt.” Dave Mason’s surge allowed him to climb to the number 7 spot, and Wayne Matlock is now 8th overall. In the number 9 spot is Kevin Smith in his Vintage Chenowth DR2. It is running a 4 cylinder engine. Greg DiStefano rounds out the top ten. 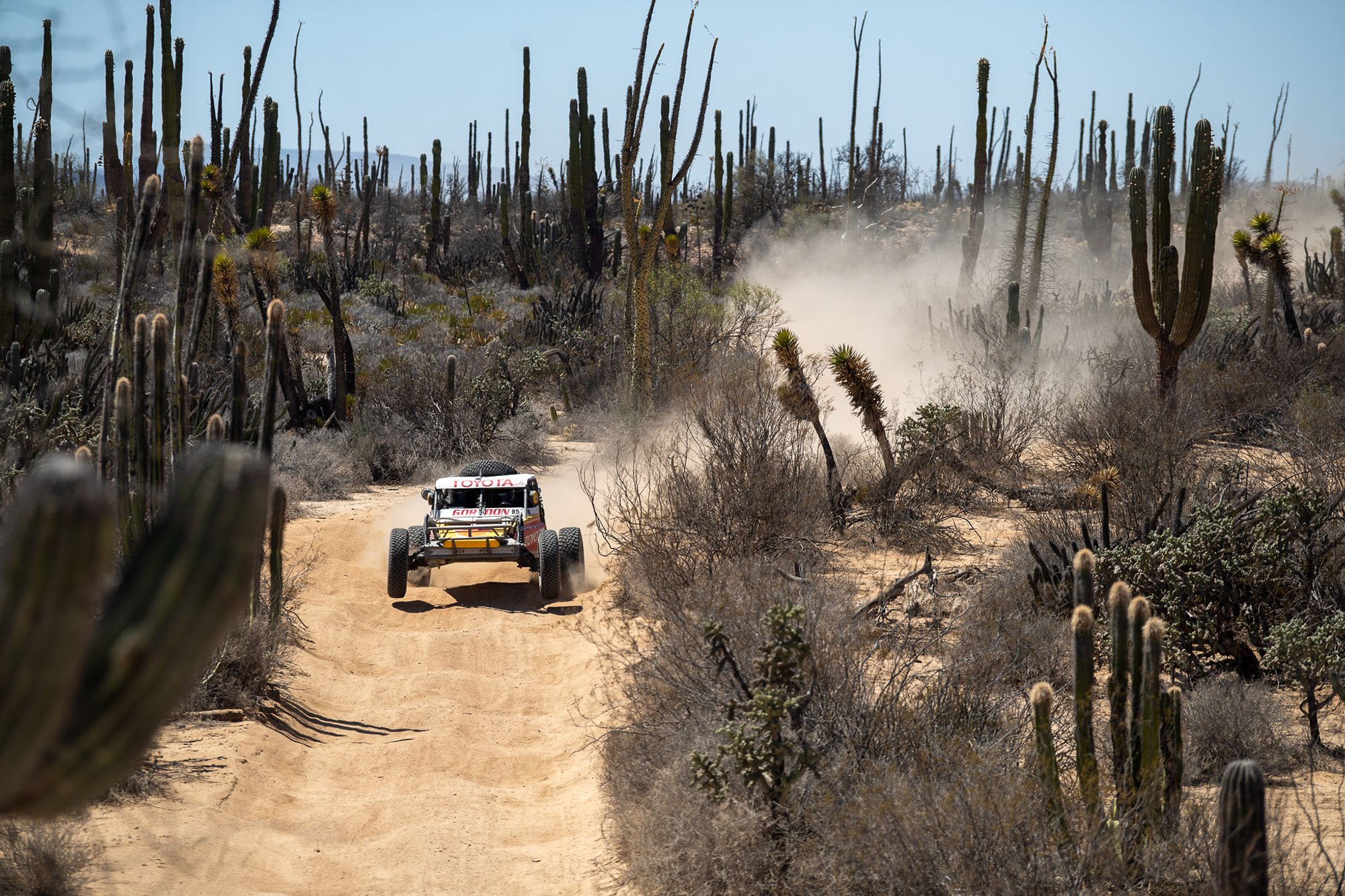 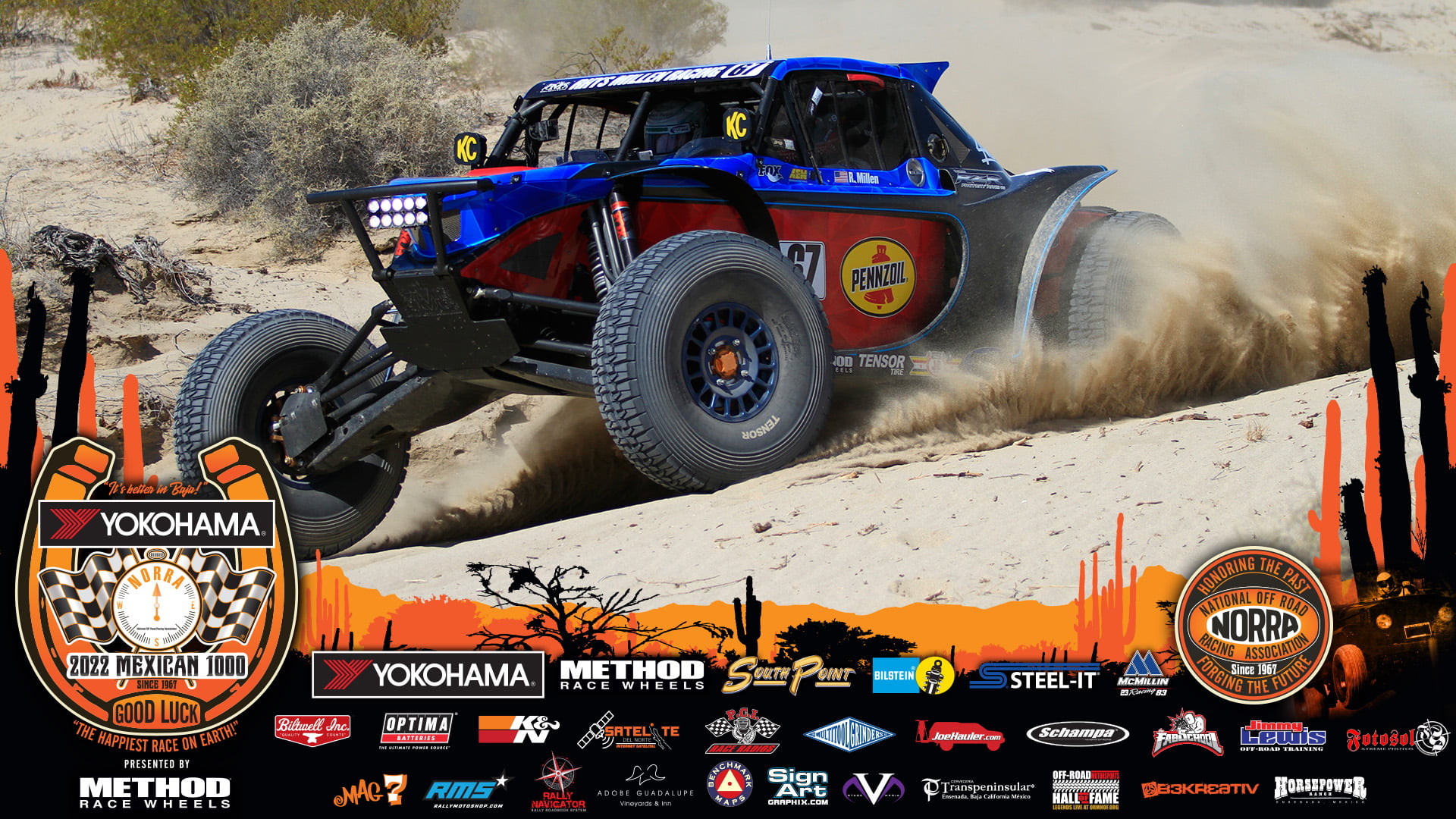 Yeti and Yolo updated us on what happened during the Safari run. They started behind Big Oly and were able to catch them in a sand wash and keep pace for several miles. Then they stopped at the Chenowth museum for lunch. Yeti grew up in southern California, and was inspired to build his 1991 Ford Ranger by a truck he remembered the legendary Johnny Johnson had built. “Truthfully I thought this day couldn’t get any better, but I was wrong,” He said. “When the opportunity to join NORRA on the Rapido Safari popped up, I knew this was my chance to build a fun tribute truck in honor of my childhood memories. We were taking some photos of our little Ford Ranger outside the Chenowth museum when I heard someone say to me ‘this truck looks like one I built a long time ago.’ I turned around to see a gentlemen leaning over the bedside looking around my Ranger with a big smile on his face. I immediately said Johnny?! He replied ‘yup’, followed up with a quick, ‘This truck is beautiful.’ I about fell over when I realized that not only he recognized my truck, but the man himself was actually standing there, leaning on it like I remember seeing him do all those years ago with his own race truck. We spent quite a while chatting about the old rough rider days as well as me asking all kinds of technical questions about the original two trucks he built. Knowing we had a long push to Guerrero Negro, Johnny went out of his way to run home to get me an original signed Rough Rider poster for us! It sounds silly but truth is, it’s moments like these that keep the internal 16 year old me on stoke! I’m beyond grateful for that moment!” 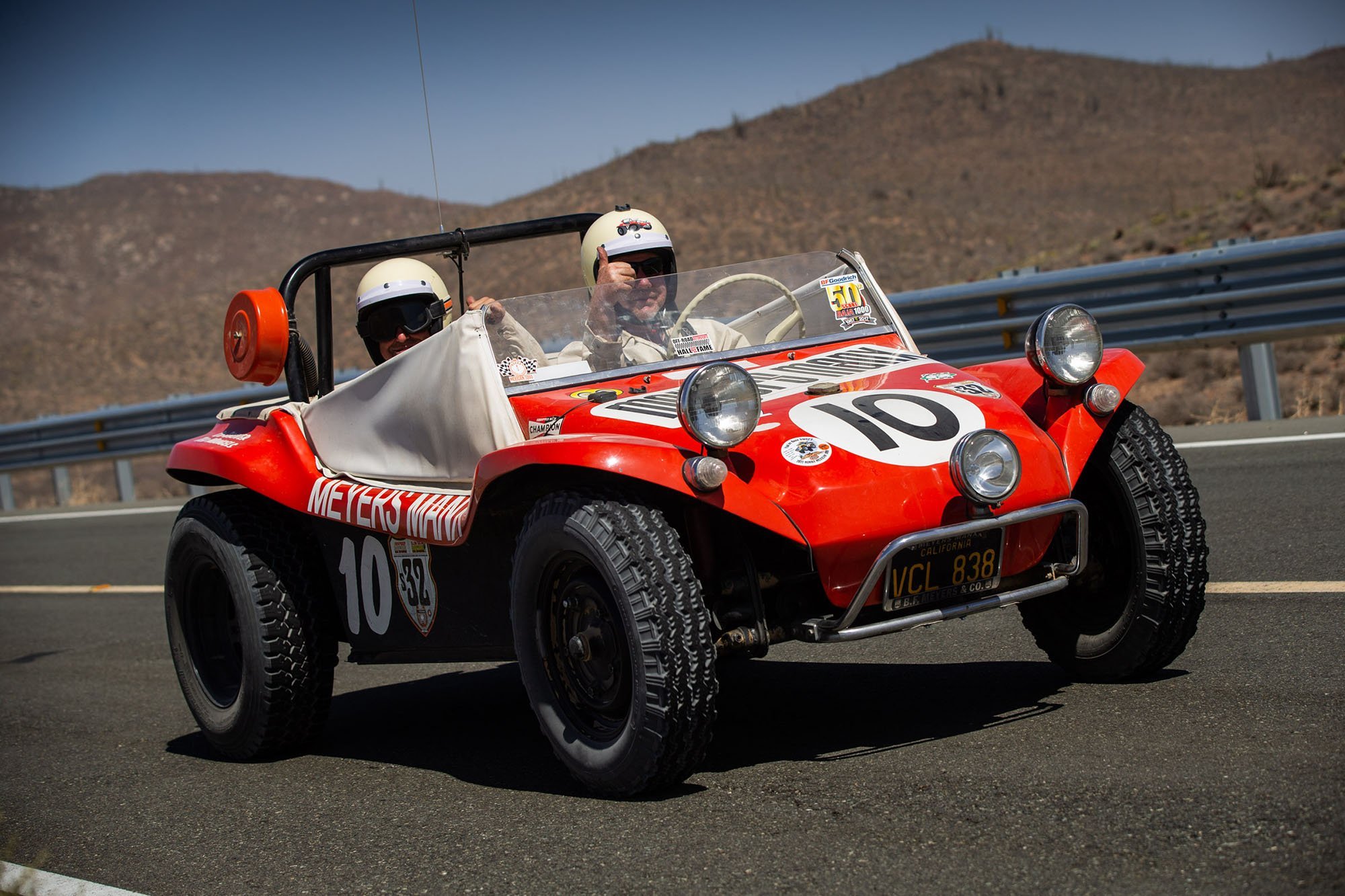 Off Road Racing is the national pastime in Baja. Everyone pitches in to support racing; even icons of the sport like Johnny Johnson. Jose Armenta with the number 711 1987 Ford Ranger team broke an idler pulley just past Valle de Trinidad on day one. “I stopped at the auto parts store but it was closed on Sunday,” Says Jose. “The cops pulled me over for parking illegally while asking directions to a junk yard. It turns out he was the police commissioner. Next thing you know he’s calling his security guard amigo at the junk yard who opened the gate for us and found the part in five minutes flat! I drove out to the truck, Dave & Les already had it apart, and 10 or 15 minutes later the race truck was fixed, I jumped in, stopped off to swap out Les for Butch in the right seat and drove it to the finish line to fight another day!”

The NORRA Mexican 1000 is an incredible experience for everyone! Day three of racing to Loreto will be more of the same. Don’t forget to tune into our live feed for coverage as it happens here www.youtube.com/c/Mexican1000Rally/videos 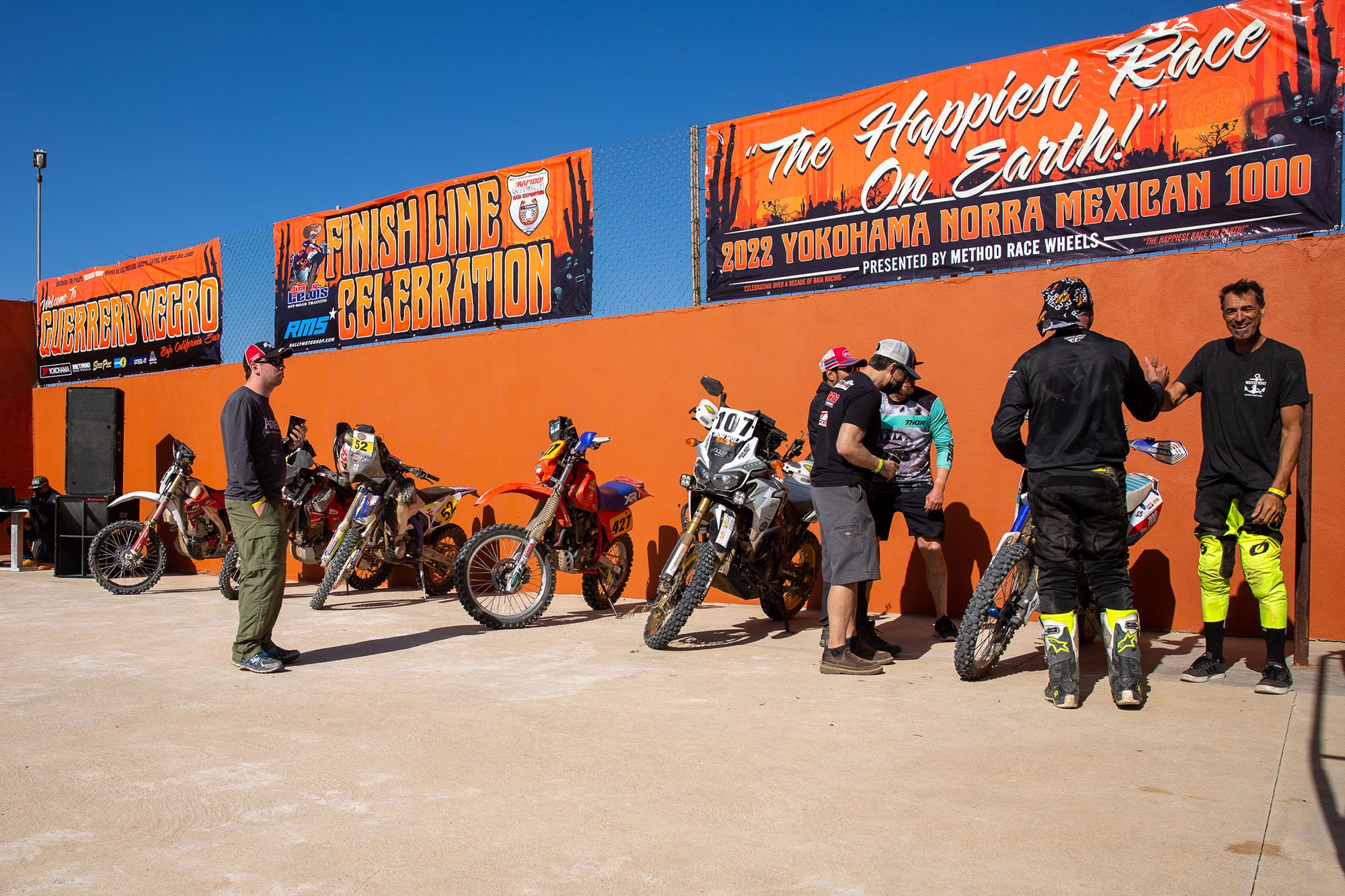