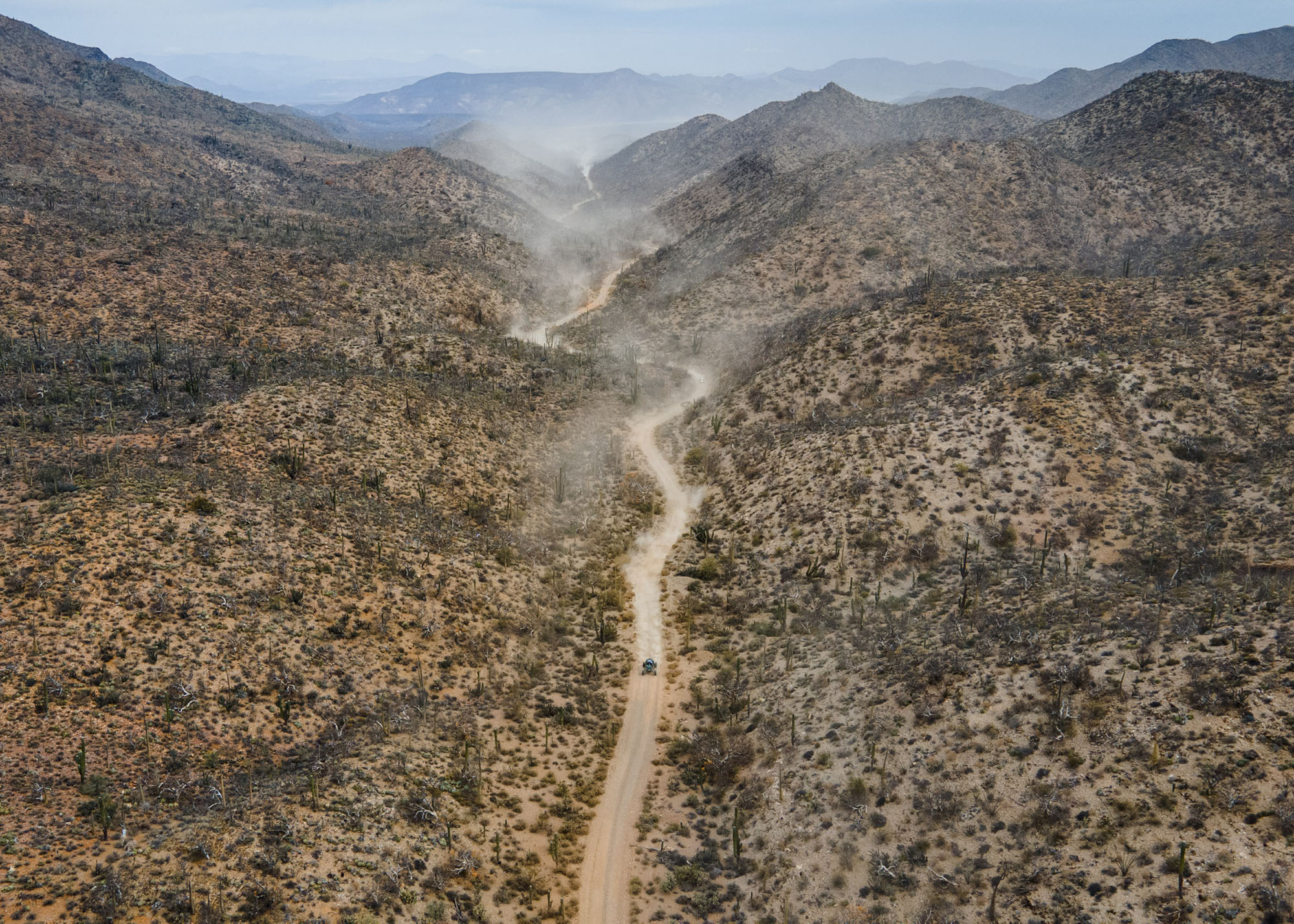 AGUA DULCE, CALIF. It’s day 5 at the Yokohama NORRA Mexican 1000 Presented by Method Race Wheels. As we cross into Baja Sur, the terrain changes, and so does the complexion of the race. We head into what most people consider the desert. It’s rough, and it’s rocky; it’s the kind of stuff that the Unlimited Trucks were designed for. They were made to just ignore the hits, and let it eat. The other classes had to be more careful, and focus on survival. Steve Menzies took the win in stage one followed by Dave Mason who has been charging. Ed Herbst was driving Mark Post’s #3; he finished 3rd. RJ Anderson was hanging tough with the big boys; he was 4th, and Rhys Millen suffered a flat tire which dropped him to 5th. On Special Stage 2, the order changed. Ed Herbst took the win, and then it was Steve Menzies, Lightning Larry Ragland, Ryan Arciero, and Millen in 5th again. RJ Anderson was not in the mix. 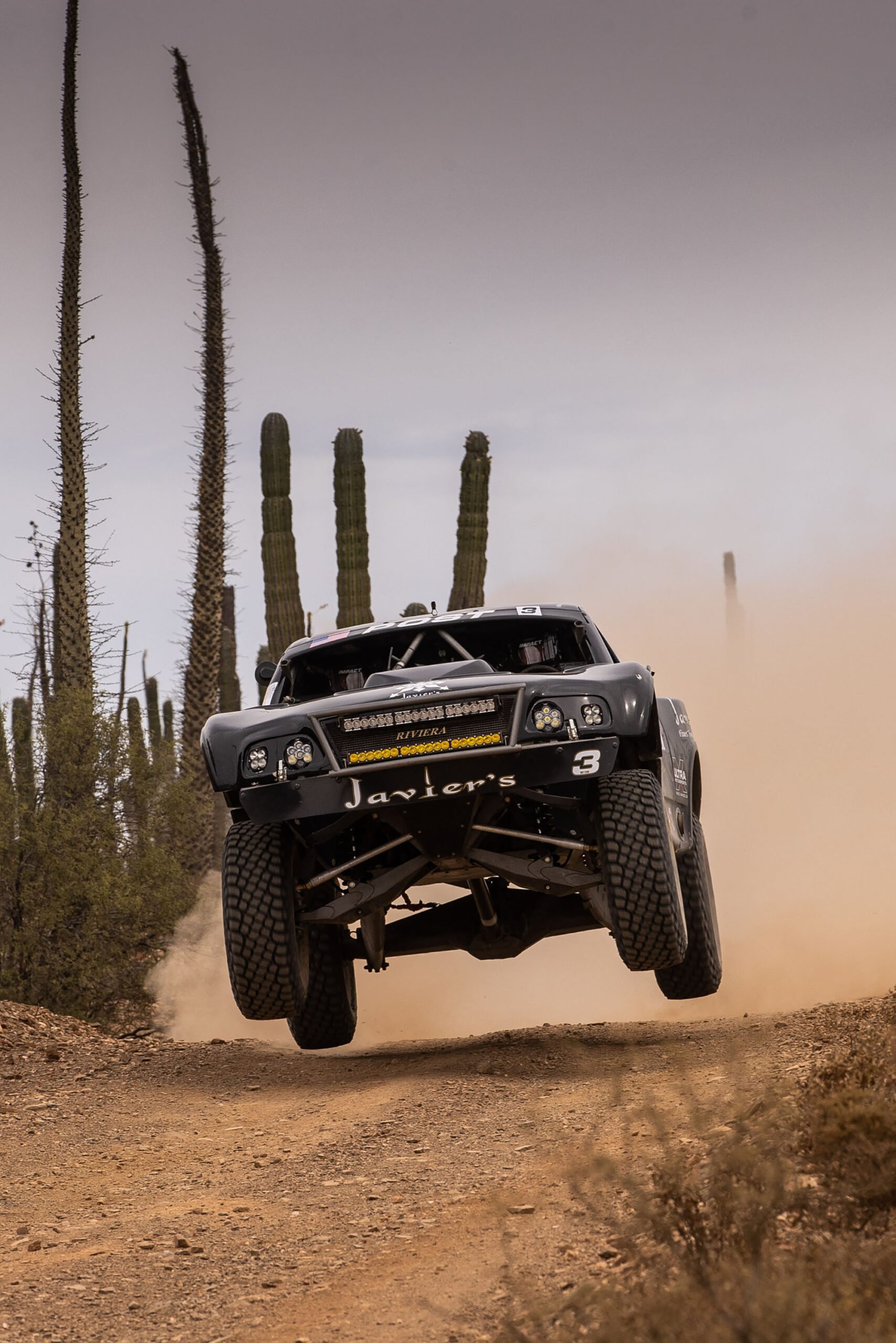 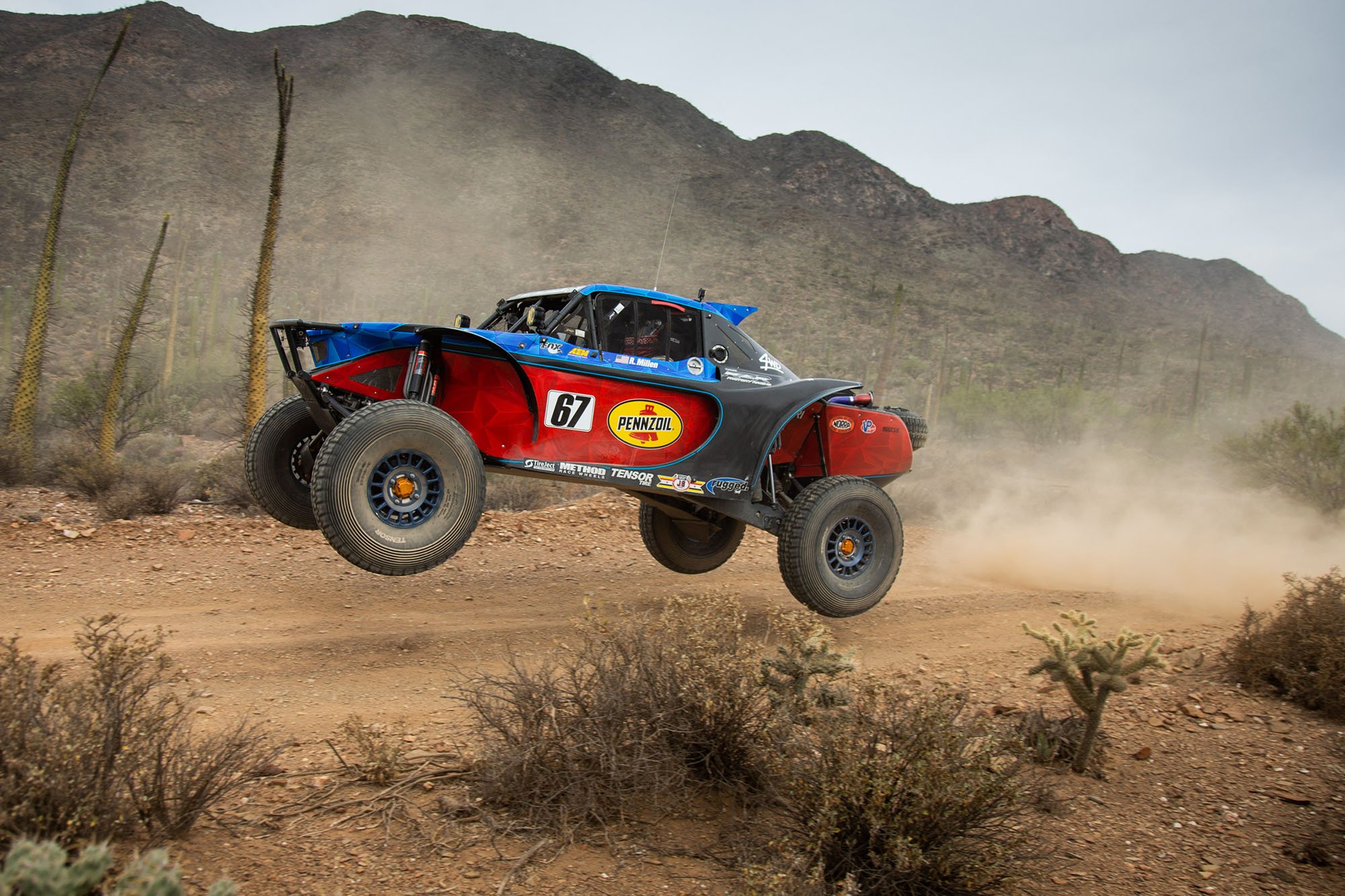 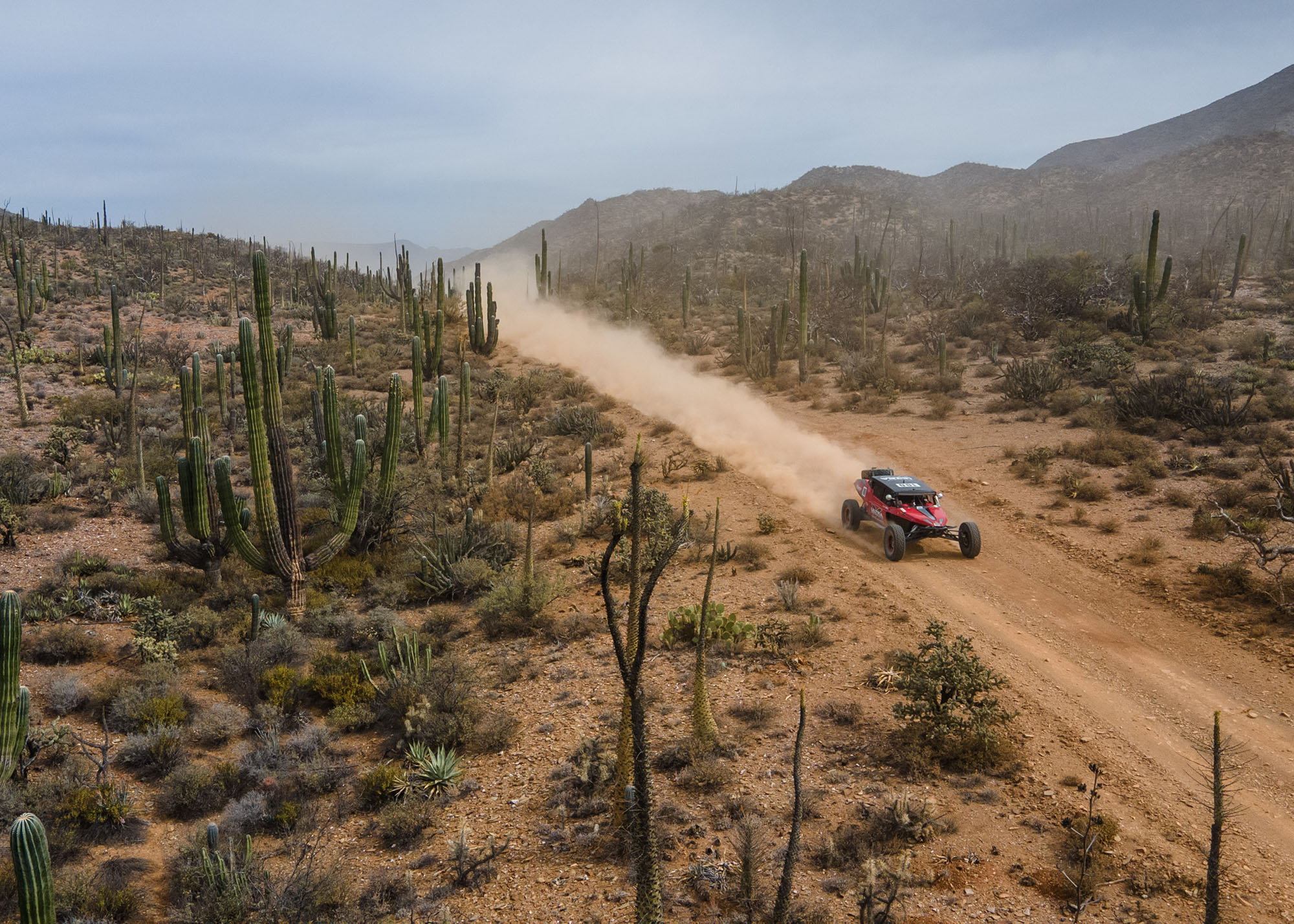 This shook up the overall standings putting Menzies in the overall lead. He was happy at the finish line saying that it was fun running down the beach. Millen was knocked off the top perch for the first time since taking the green flag in Ensenada. Ed Herbst was as stoked as Menzies. The Riviera team had climbed from way down in the field after a speeding penalty to the third spot overall. He said “Lovin Mexico, Lovin NORRA.” Besides the Post truck, the top ten are all evolution class vehicles. Wayne Matlock is in 5th and RJ Anderson 6th in UTV’s, but Evolution class none the less.

That doesn’t mean the rest of the field isn’t having fun. It’s just that they have a different reality. The strain of racing every day is taking a toll on some, so they have to adjust. It’s the same with the drivers. It becomes more of a mental game. You have to run clean, save the car, and the crew. You don’t want them up all night fixing damage. El Diablo Caballo or “The Devil Horse” is still galloping along. They had a tough race last year, and are looking for redemption. Jim Greenway is leading in Legend Buggies class with his Raceco 2/1600. It’s also very cool that Sal Fish is leading the Legend Cars class in his Empi Baja Bug. In Legend Trucks, we have a legendary driver leading the way, Mark Stahl. Speaking of legends, Mark McMillin has “Macadu” out front in the Vintage 6-cyl Buggies class. Some other leaders are Chris Greenwood (Legend 4x4s, Ford Bronco), Scot Link (Challenger Cars, VW Baja), Colin McLemore (Challenger Trucks, Ford F100), and Rick Hurricane Johnson (Challenger 4x4s, Ford Bronco). The unlimited cars and trucks out front steal the limelight, but there is plenty of action throughout the entire field. 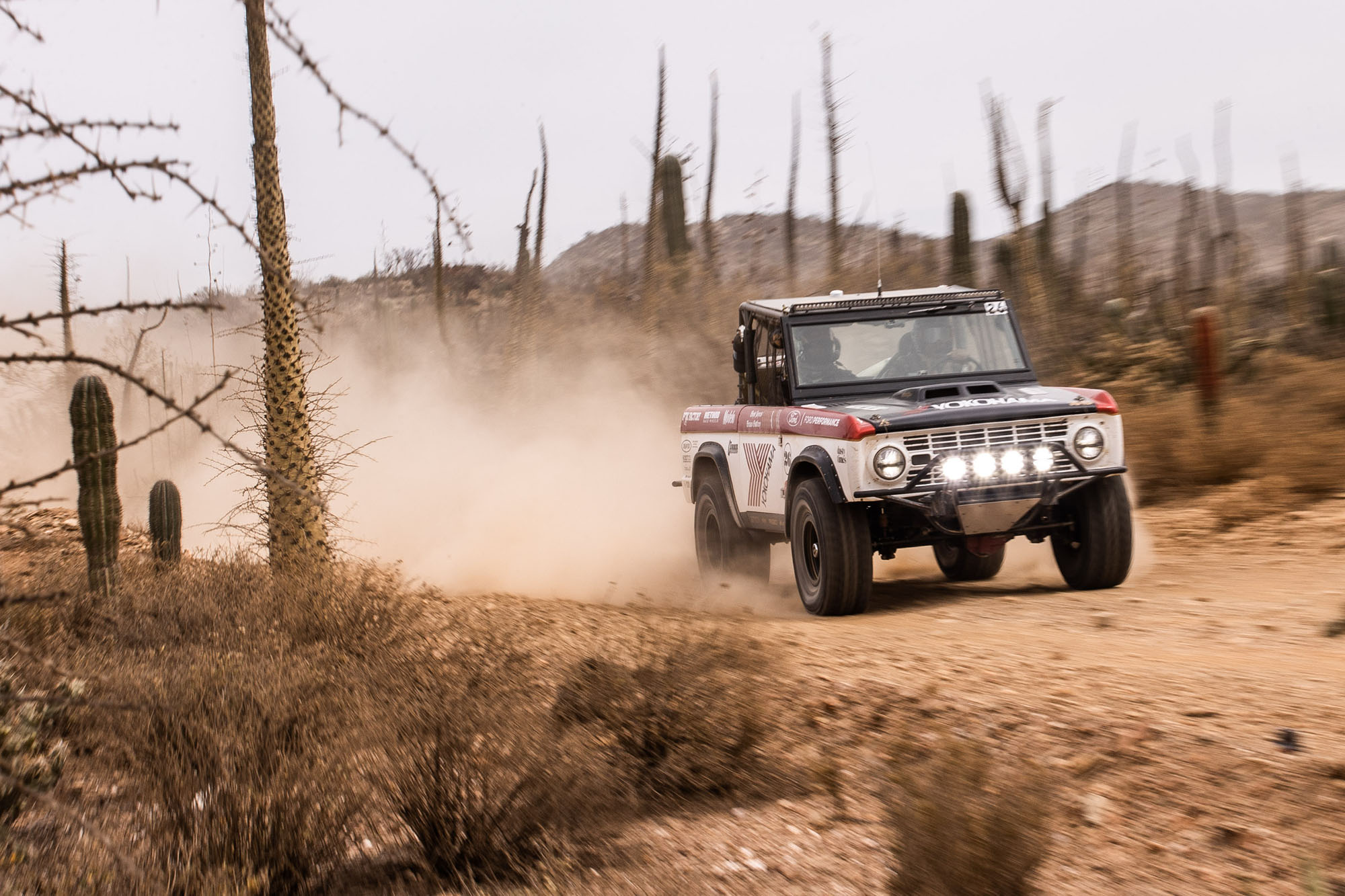 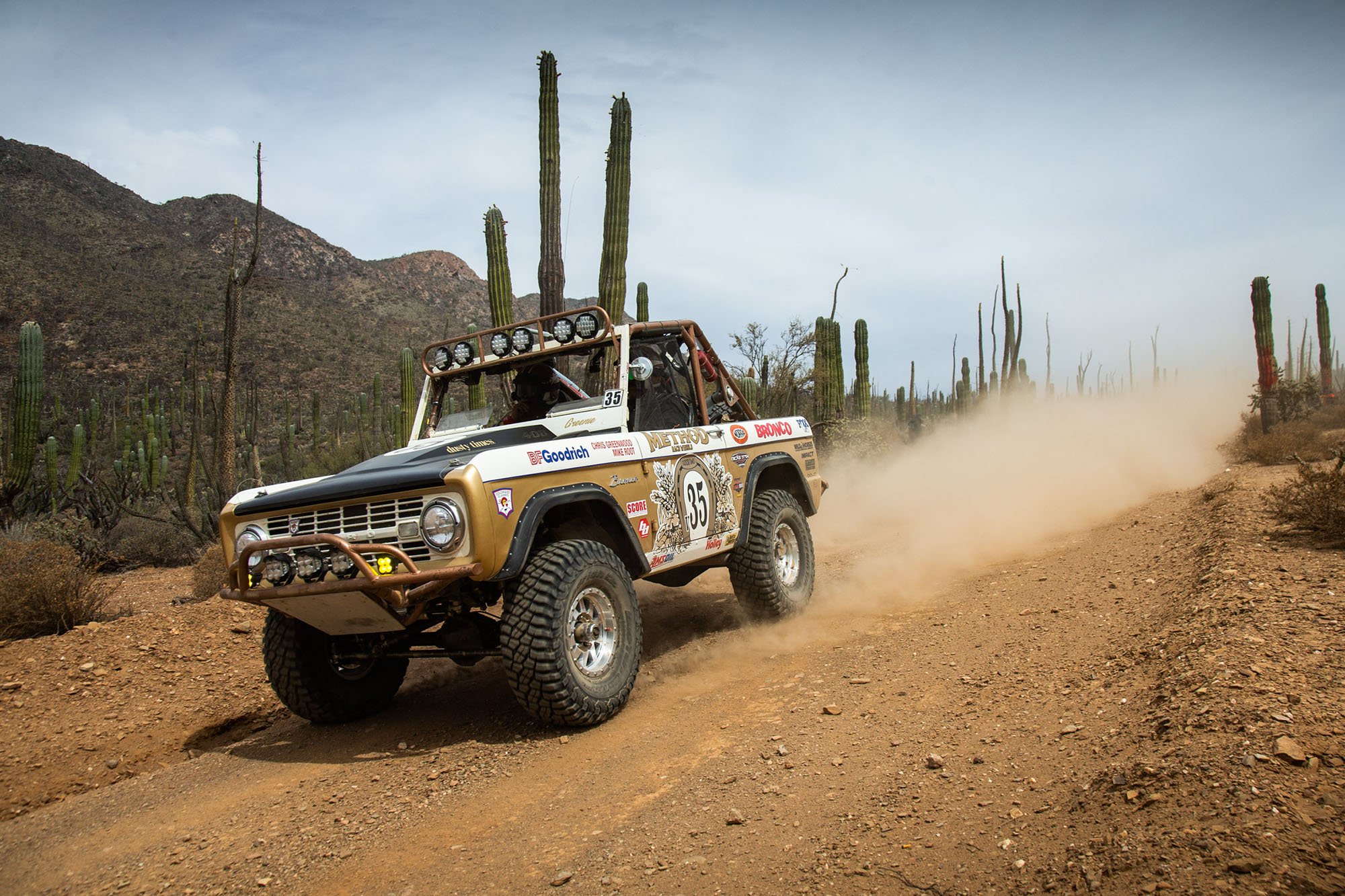 There is one team that we know is having a great time (besides the Vespa guys). It’s the number 725 Evolution Prerun Trucks class 2022 Ford Bronco of Jamie Groves, Seth Goslawski, and Brad Lovell. These are some of the guys who developed the new Bronco for Ford. They finished 3rd at the Mexican 1000 last year, and now they’re hooked. They have a very nice sound system, and AC. “We’re having a great race,” says Jamie Groves. “The truck is running great and it’s much more capable than last year’s. We are running a 2022 Bronco Wildtrak with the Hoss 3.0 Suspension that has Fox internal bypass dampers and 35” tires. It felt super fast and fun today! This Bronco is completely stock other than safety gear. It’s great to be back in Baja running with all of the classic Broncos at NORRA!”

NORRA racer Ted Moncure shared an update from last night before today’s stage. It describes some of the challenges that the more limited cars and trucks endure. “Long day today in the 1717 1989 Toyota Pickup, but we finished our section and I think we are still 1st in our class after day 2. Kevin and Ryan started and finished their special quickly, with only a few minor issues. (Stuck in the silt for 15 minutes). They handed us a perfect truck, and Chuck and I drove the second special, 120 miles of fun. We had a blast, and only one issue; we got stuck in a deep silt bed for over an hour. We tried everything; sand mats, digging, bush under the tires, airing down. Nothing worked. The ruts are deep and our tires are small. Finally a 4Runner came through the bushes to give us a pull and we were on our way, finishing our section before our competition. The truck is in great shape, we have had no flats and no other issues. Now we are prepping the truck for tomorrow in Bahia de Los Angeles. This post is coming to you via Starlink satellite powered by a prototype Smittybilt power bank I am testing.” 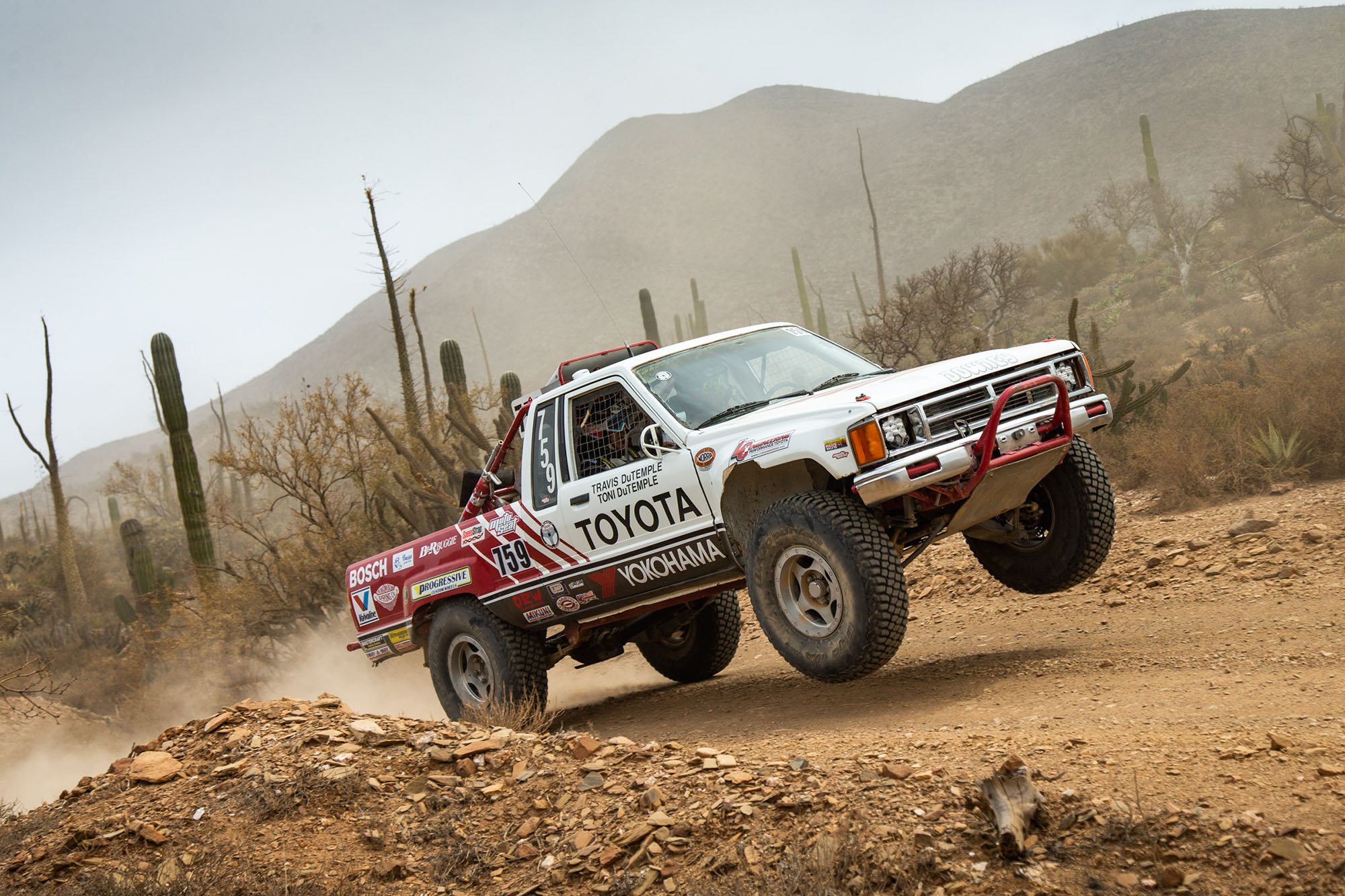 The Motorcycle classes had a brutal day yesterday, and followed it up with even more total mileage today, but the terrain was, believe it or not, easier to ride. The overall standings were basically the same. They didn’t have the deep sand or as much silt. It was also much easier to navigate. They needed a break. They also were the first ones to the McMillin Racing Finish Line Celebration, poolside at the La Mission Hotel. There was great food, lots of booze, and the stories were flowing. Everyone deserved a celebration for getting this far, and heading into Baja Sur and the last couple days of racing. It starts to sink in that we are more than halfway to San Jose Del Cabo, and there has been a lot invested so far. The goal now is to get to Cabo, and another epic party on the beach! Don’t forget to check out the live feed and find live tracking, and results on our website at www.norra.com. 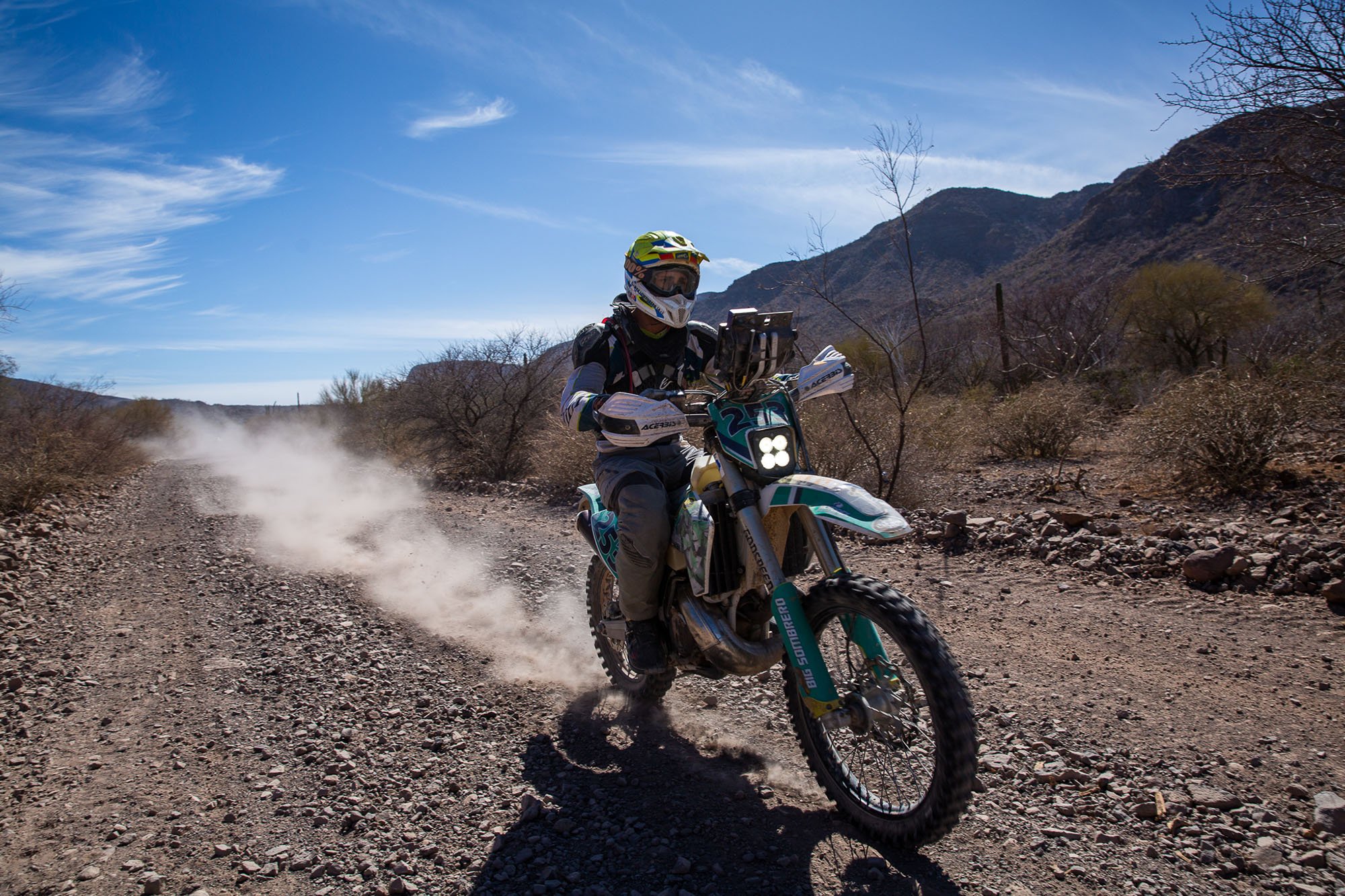