Race Day 5 Had Everyone Coming Together! 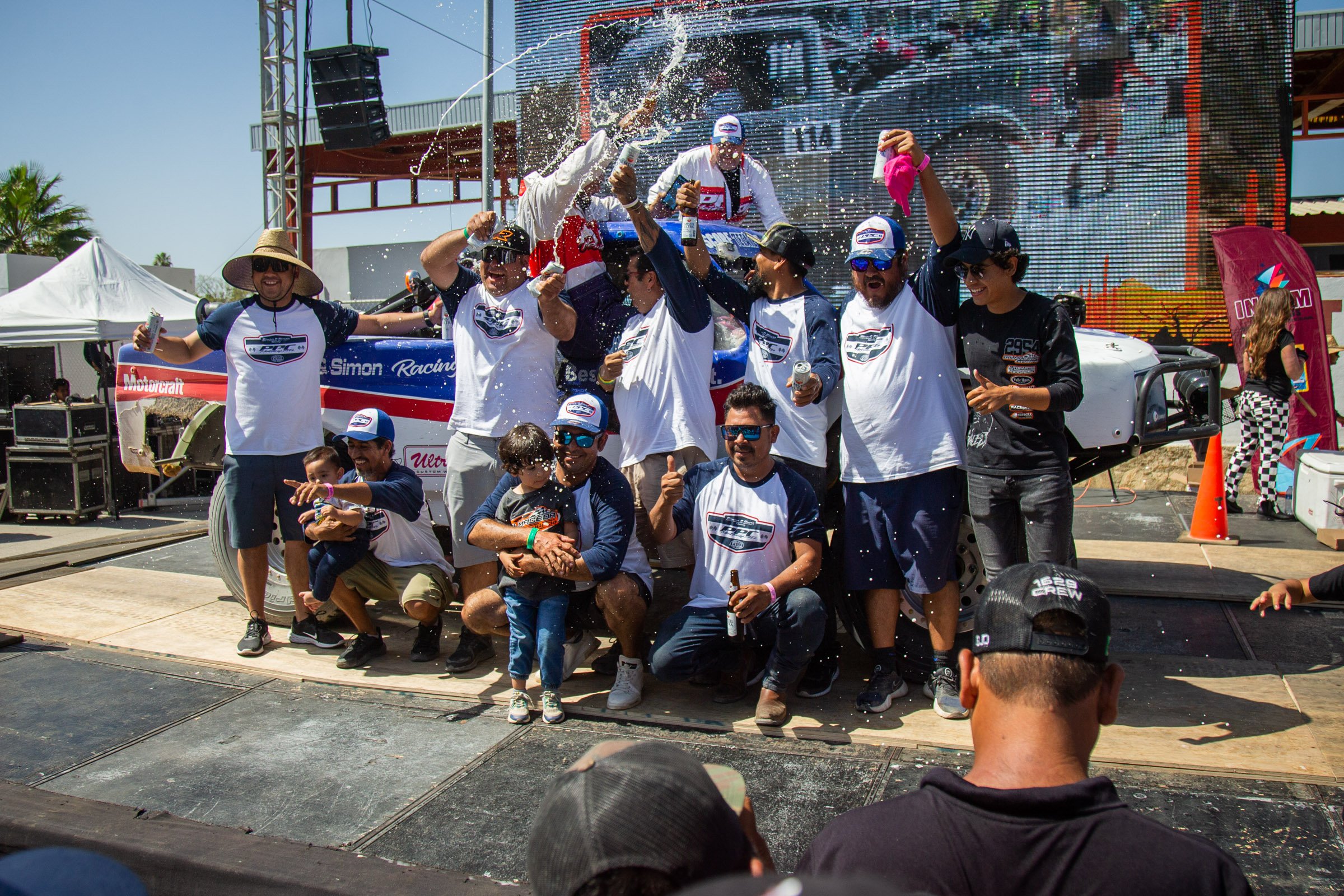 Day 7 was the final day of racing for competitors, and the last day of a wonderful adventure for the Safari class participants at the 2022 Yokohama NORRA Mexican 1000 Presented by Method Race Wheels. It would be a day that brought everyone together. After several grueling stages, covering many hundred kilometers of the Baja Peninsula, the final day was a relatively short 231 kilometers (143 miles). The bikes and cars were now on the same path to San Jose Del Cabo for the final finish line podium. As they got closer to town, huge crowds gathered along the course to cheer on the dusty, and well-worn bunch. Emotions were mixed. They were jubilant, and relieved to have made it all the way, but also melancholy that it would all soon end. Although the driving would be over, the huge awards party on the beach was the following day, and they still had all night to bench race and revel in their accomplishments. 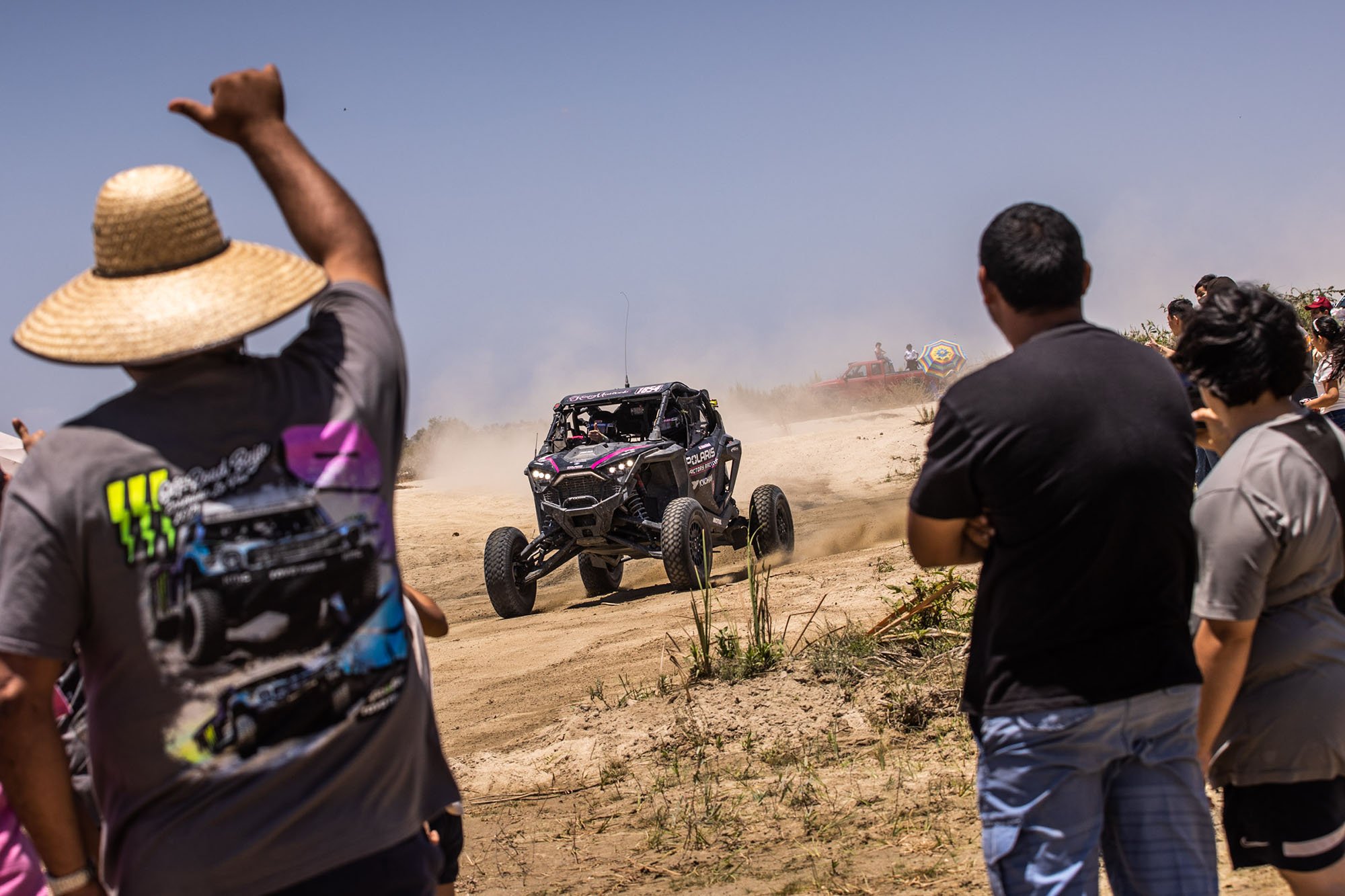 As competitors trickled into the finish line, many were reunited with their families and friends who came down to join the celebration. Many like bike overall winner Matt Sutherland could finally relax, and have the best beer of the rally. He was taking this very seriously, and his performance on the bike showed it. Even hitting a cow, and crashing into some cactus could not deter Matt on his quest for the overall. Daniel Bartolucci, Matthew Wichgers, and Nick Torchio were all vying for the top spot; which drove Sutherland to put in such an effort. Everyone in the motorcycle classes accomplished a huge undertaking. It’s called the Mexican 1000, but they all rode 2,112 kilometers, or 1,312 miles at a minimum. If you got lost, and most did, it was even greater. Using only road book navigation, these riders did an incredible job getting to the finish line every night. These were not only young bucks on modern bikes. Some of the bike competitors are well travelled so to speak. Second overall Daniel Bartolucci won the 50+ Vintage Dudes Class. Ben Shuckburgh from Wales was second. Bruce Anderson won the 60+ Vintage Dudes class with Bob Stewart finishing second. We also saw the team of Lyle Tonneli race a Honda 250R ATC (three wheeler) all the way to Cabo. It’s also rather amazing that the two teams from Italy on their Vespa’s crossed the finish line on the final day. 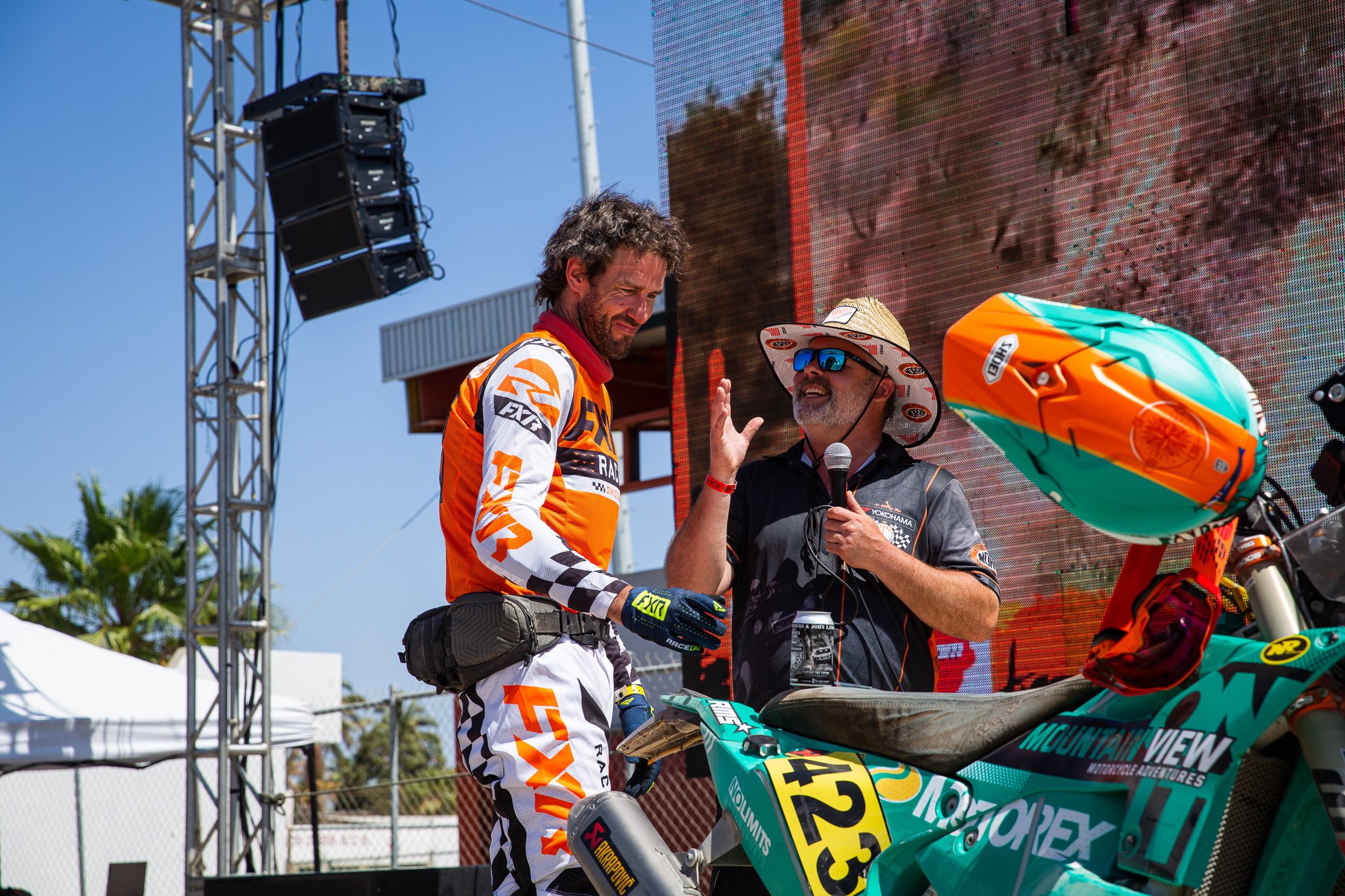 The car and truck classes had their own amazing results. Defending Overall Champion Rhys Millen set the pace early, but as the terrain got more wide open, and rougher, the unlimited trucks showed their strength, and took over the top spot. Despite a gallant effort by Mark Post’s team of talented drivers that included Mark, Jesse Jones, and Ed Herbst, Steve Menzies came away with the overall win. Steve was racing with Son Bryce who made sure to give credit where credit was due. He said that he only drove 300 miles, his Dad did the rest. He also said his Dad was his hero, and it’s clear to see why. Rhys Millen was third overall and fourth overall was a little surprising. Wayne Matlock, who knows Baja like the back of his hand, bested a lot of highly accomplished drivers in bigger faster cars, and trucks. He did it in his Polaris Pro R UTV. Wayne wasn’t the only Matlock making news. Kristen Matlock had troubles early on, but came out swinging on day 5, stage one. She ran a 26:15, which was 15 seconds faster than second place overall on the stage; Rhys Millen. RJ Anderson also had some excellent results that rivaled the bigger vehicles as well as PJ Jones, and Casey Currie. The UTV’s had an excellent showing all around. 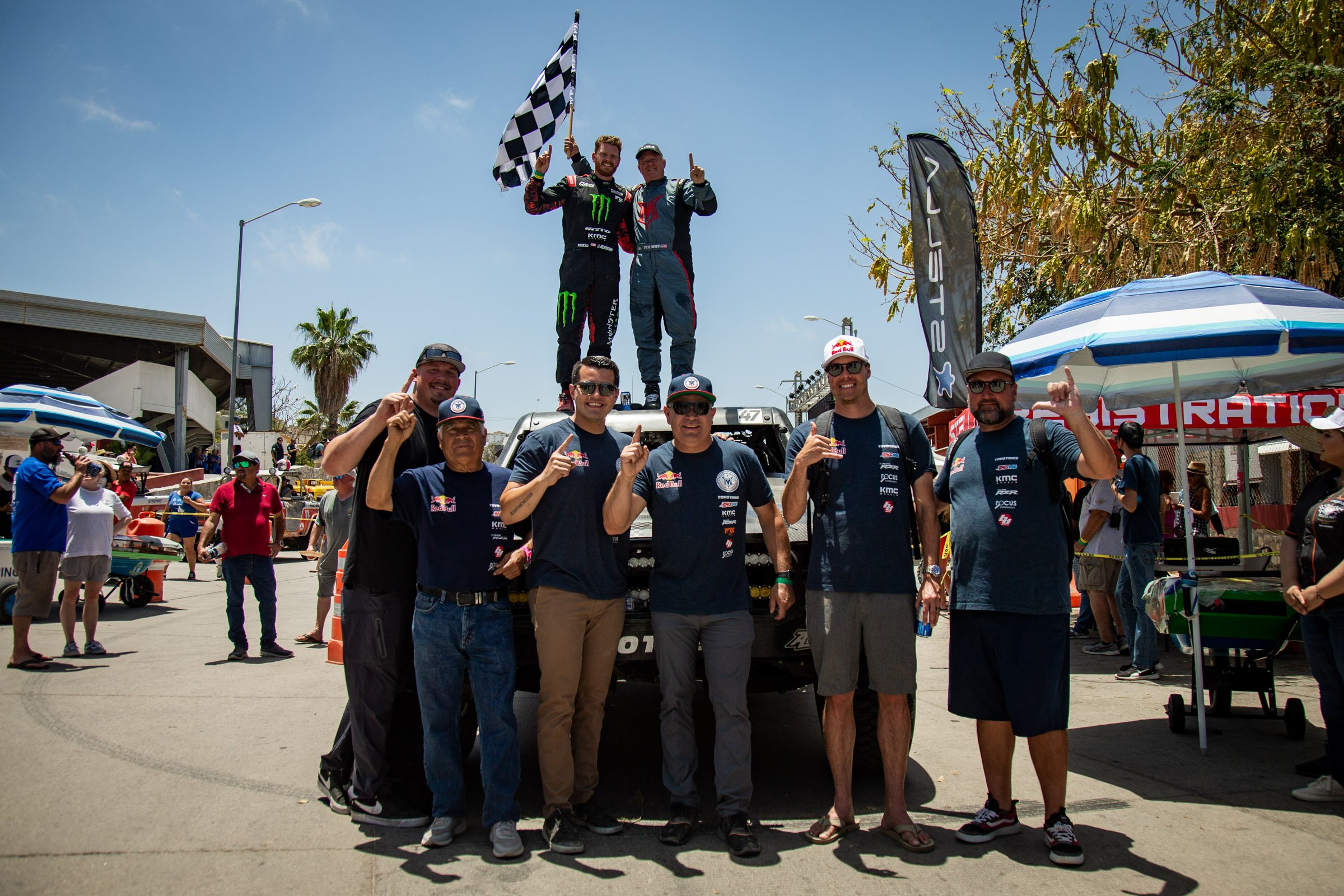 The winningest team at NORRA, Boyd Jaynes, and Brian Godfrey picked up another victory in their Caballo Del Diablo Bronco; number 8. They were kind of serious this year, wins mean a lot when you start staking them that high. Watching Sol Saltzman drive his pioneer class Funco SS1 was like going back in time. He was the fastest overall in his class followed by a pair of Meyers Manx driven by Jon Steinhilber, and John Kieslich in the Goldie II tribute car to Bruce Meyers in 1967. The Manx team had three cars in the race that year; a red car driven by Wilson and Mangels, “Goldi” driven by Bruce Meyers and “Wheelo” Anderson, and a third car driven by George Haddock and Jimmy Smith. The very first racers to win the NORRA Mexican 1000 back in 1967 were the Meyers Manx team car of Vic Wilson and Ted Mangels. 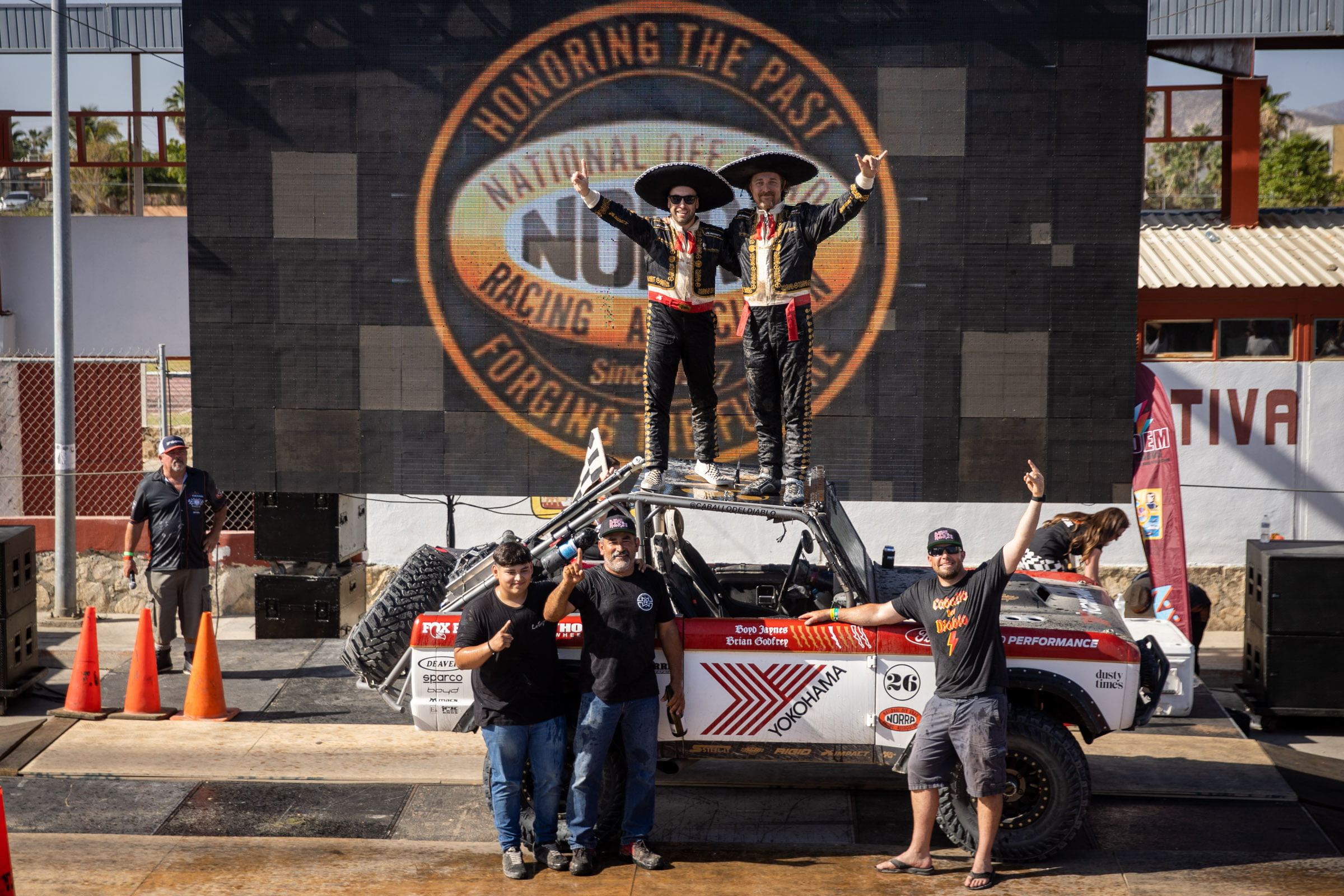 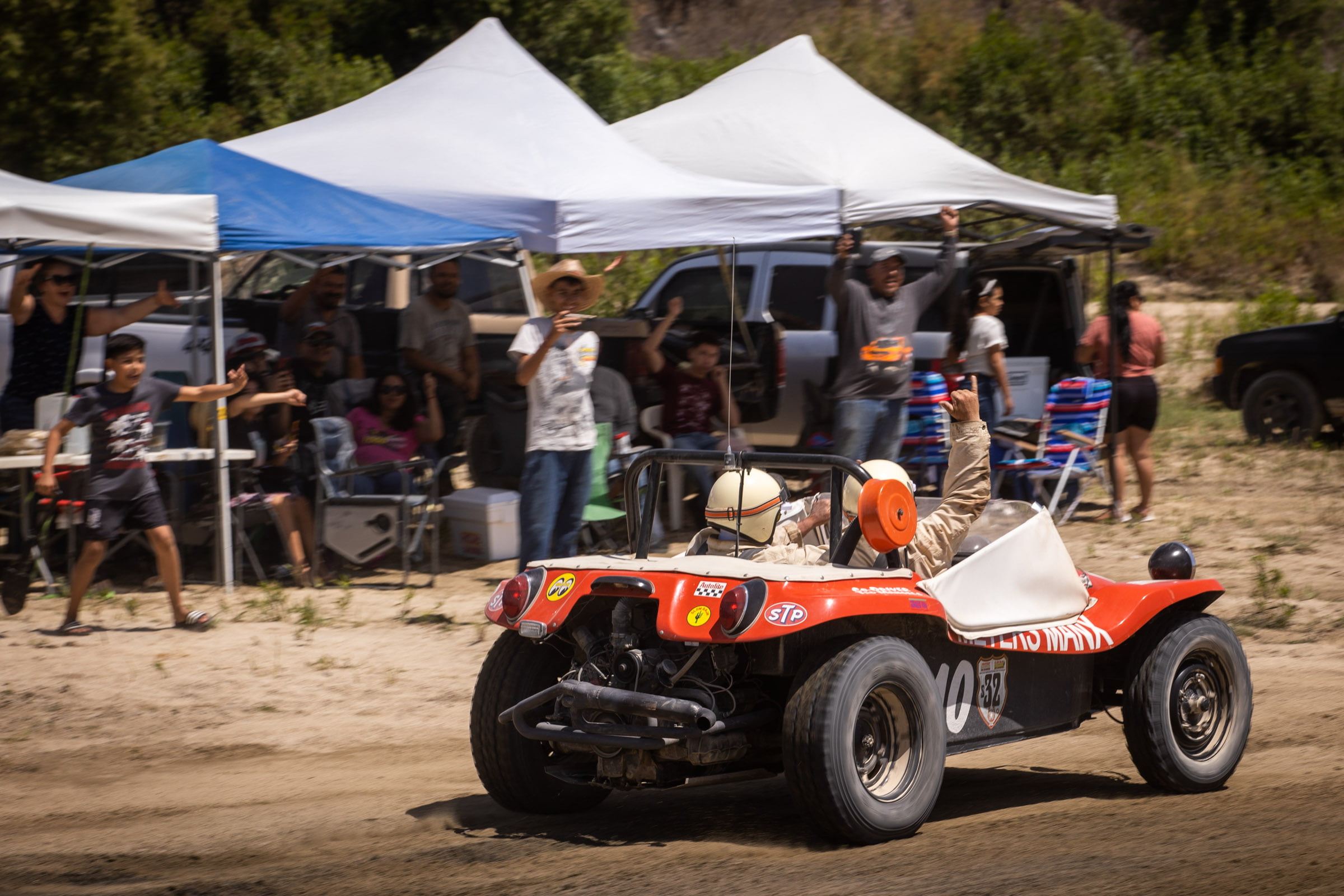 Fans at the finish line would also witness the many icons of the sport that showed they still got it. Mark Stahl won his class, and says he’s hanging up his driving suit. We’ll see. Sal Fish spent some time driving his old class 11 bug on the way down. Rick “Hurricane” Johnson took the Challenger 4x4s win. We had a hurricane and lightning as “Lightning” Larry Ragland finished right behind Rhys Millen in the Evolution Unlimited Buggy class (Millen won). Mark McMillin won the Vintage 6-cyl Buggies class in “Macadu.” Mark Post won the Historic Truck and Truggy class over Trevor Glidden, and Don Prudhomme got a top five in his UTV. They also saw drivers on their way to stardom like Max Gordon, and Dave Mason Jr. Probably one of the most emotional wins went to Zak Langley who was driving his departed Father’s Mason TT spec truck to the win in the Evolution Heavy Metal class. It was the perfect tribute to the man who so many loved and respected. 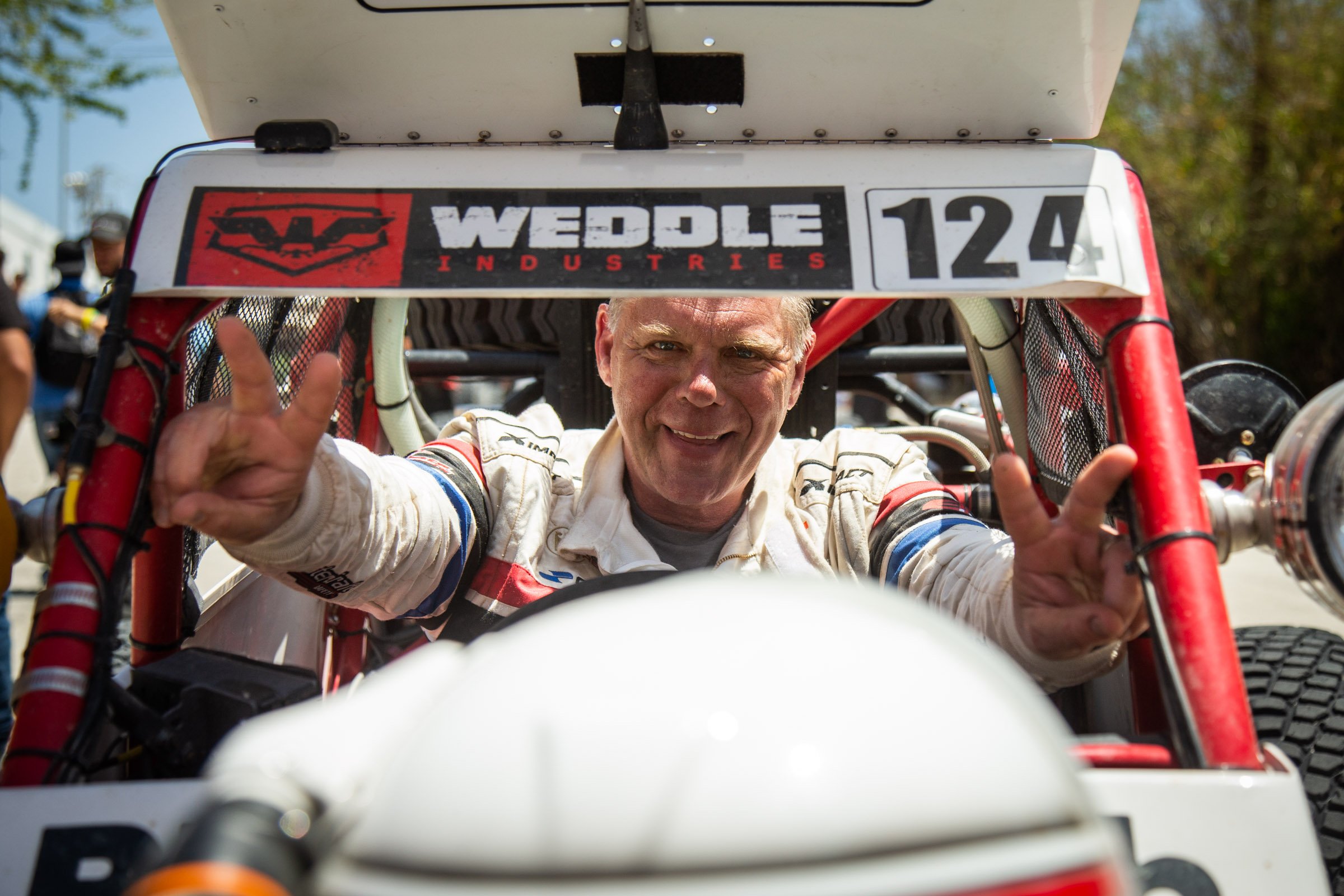 The racing was over, but the memories will last a lifetime. One of the best quotes of the day was from Geoff Hill from the Baja Bound team. He said their faces hurt from so much smiling. It doesn’t get any better than that at “The Happiest Race On Earth!”. It lived up to its reputation. 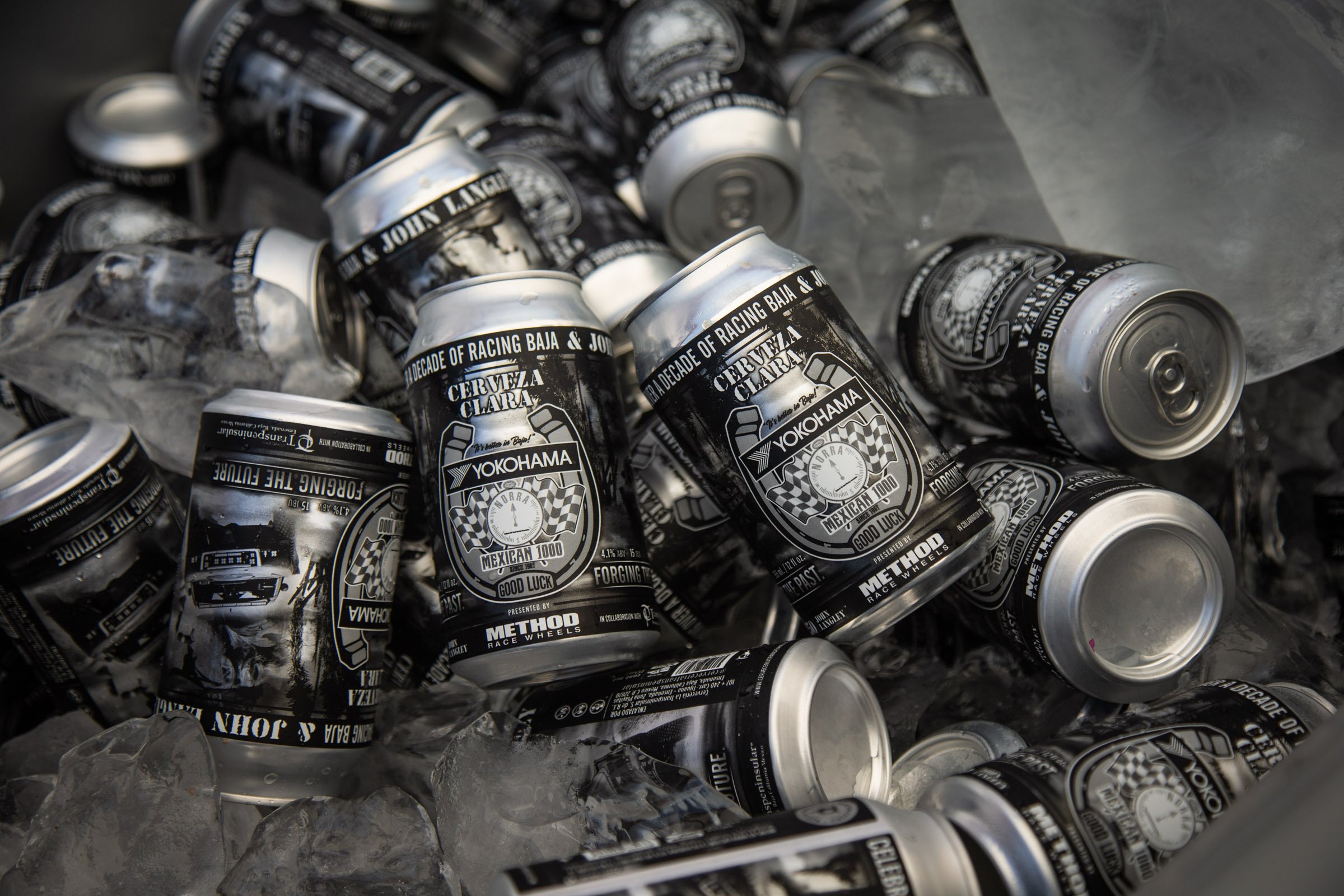