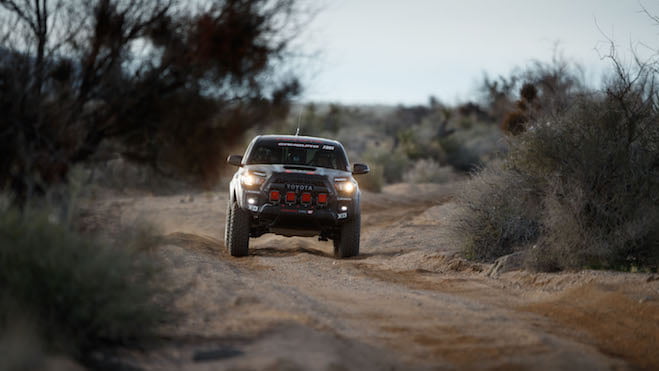 As the morning sun starts to heat up the Nevada desert, Camburg Racing’s near-stock Toyota Tacoma TRD Pro is already kicking up the dust and counting down the miles in the Mint 400, America’s toughest, most storied off-road race.

In the “Dealer to Desert” finale, former “Tonight Show” host and off-road racing rookie Jay Leno is at the wheel for the grueling opening loop. Meanwhile, Camburg co-founder Jerry Zaiden, who’ll take over the Tacoma for the second leg, nervously checks the GPS tracker at the team’s pit in Primm. 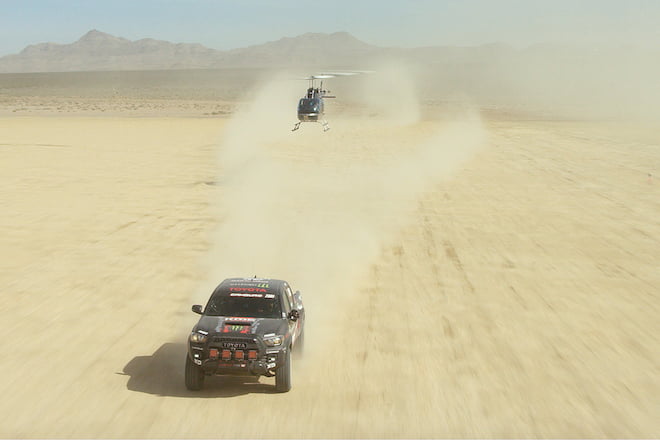 Zaiden’s been around off-road racing long enough to know it isn’t just the truck-destroying terrain that Leno and his navigator and mentor, Ryan Millen, have to contend with. When the course is buzzing with dozens of other trucks and buggies, all racing hard to put their name on a class trophy, you can expect the unexpected around any turn – so when the Tacoma suddenly stops moving on the tracker, the tension mounts at Camburg base…

The guys back in Primm won’t find out what caused the truck to stop until, fingers crossed, it completes its loop – which is a little worrying, but still way better than knowing it’s game over somewhere out on the course. As Leno continues and the GPS tracker counts off the miles, Zaiden suits up and gets ready for his stint.

Finally, there it is – the Tacoma rolls into the Camburg pit and an elated, but weary Leno jumps out into the well-drilled frenzy of the changeover. After the quickest of debriefs, including news on why the truck stopped, Zaiden is in the driver’s seat and heading out on course, confident of completing the race.

To finish the Mint 400 in a purpose-built race truck is an achievement in itself. So to get to the finish in a near-stock truck, with a rookie at the wheel for the opening loop, is a mighty big deal. From rock-strewn mountain passes to flat-out dry lake beds, the beating it puts on a stock truck – the frame, transmission, and especially the suspension – is way outside the normal operating envelope. 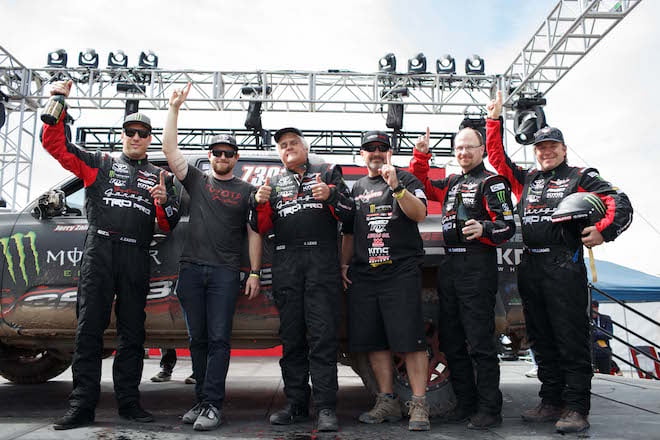 It’s testimony to the Tacoma TRD Pro, the prep skills of the Camburg Racing crew, and the stellar job done by Leno, wingman Millen and team leader Zaiden that the truck didn’t just make it around in one piece, but rolled onto the podium as a 2017 Mint 400 class winner.