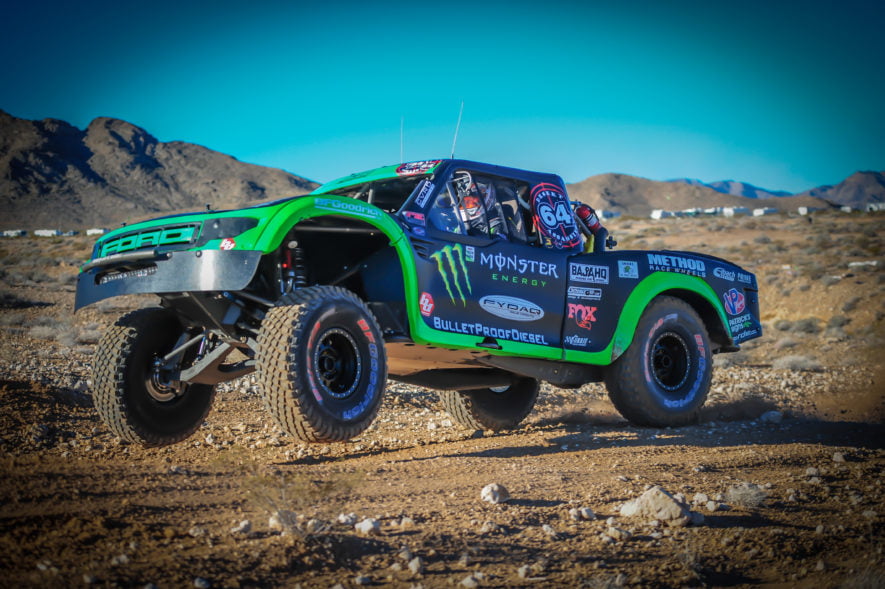 Jean, Nev. – It goes without saying that dust is usually a major challenge in the sport of off-road racing.

However, the challenges of the 50th annual PCI Race Radios SNORE 250 here Feb. 15-16 didn’t include as much dust as usual, thanks to unusually wet winter storms that were socked into Southern Nevada while generating a completely different element. This time, it was water that dominated the world of off-road racing south of Las Vegas that drenched the desert prior to the start of the race the morning of Feb. 16.
The dry lake bed that can be seen from I-15 is anything but dry this year. However, the typical SNORE 250 layout did claim its share of drivers who failed to heed the advice of the race director who warned that patience was a “must” to survive the annual event.

The Dean family was well-represented in the 100-plus field of entries considering that James Dean won the Class 1 championship while father Pat Dean ran to Unlimited Truck and the overall title.
James Dean was quick to thank his many sponsors for their help. Among the sponsors Patrick’s Signs, Ultra Wheel, Vision X, King Shocks, BJ Goodrich Tires, Weddle Transmissions, Fydaq Co. and Grandpa Butch.
“Our first two laps were flawless,” James said. “On the last lap, with a four-minute lead, we got a flat and had problems changing it so my dad got ahead of us. We followed him to the finish line. It was very cool that the Deans finished first and second.”  “It was a close race all day,” said father, Pat, who drove a Trophy Truck. “I had a flat on the second lap. On the last lap, James got a flat and that allowed us to get around him. Once I got in front of him, it was kind of over. That’s one of those stories we will never forget. We won by about eight or ten minutes.”

Pat Dean’s co-rider was Shane Robinson of Dolan Springs, Ariz., and has been his navigator for the past 13 years. The truck is owned by Mike Craft, who is from Corona, Calif.

In what had to be considered perfecting timing, SNORE President Kenny Freeman was working double duty since he competed in the Nostalgia Division driving a buggy once driven by his late mother, Marian, and also followed closely the dramatic battle with the Clark County Commission over a lands use situation that could stymie off-road racing in Southern Nevada.

Freeman’s dedicated efforts brought invaluable media attention in print and broadcast journalism outlets, with a hot topic that could shore down off-road events and even eliminate bigger programs that bring huge money to Clark County every year. “The race went about as perfect as you could ever get,” Freeman said. “All of the racers said they had a great time. I didn’t hear one complaint all weekend.”
The economic impact of SNORE and its off-road racing events was evidenced by the fact that the latest event resulted in a sellout for Terrible’s just one week after the establishment had 60 percent occupancy.

This course was ROUGH.

Sarah Koeth drove both laps with her dad, John, in her Limited Sportsman Class entry and knew from experience that the SNORE 250 course was very challenging.
“It was an eventful race weekend,” said Koeth, who is currently attending UNLV so she can obtain her degree in Elementary Education. “Right from the start, we had some issues that put us about 30 minutes down, so it became a survival to the checkered more than anything else. “In fact, a lot of people were saying that the course was even tougher than Ridgecrest (about an hour outside of Barstow, Calif.). The event marked Koeth’s 20th off-road race.

“I grew up around off-racing,” she said. “I was about six or seven when my dad started racing. My mom, Sandi, raced for about a year and a half and it was just something I had to do.”
Koeth won the 2016 SNORE Limited Sportsman Championship.  “On the year that I won the SNORE Limited Sportsman points title, I took third at the Battle of Primm, second at Ridgecrest, third at Caliente, second at the Midnight Special and third in the SNORE 250.” Koeth, a native Las Vegan, became the SNORE secretary in 2017.

Tim Miller was the lucky competitor who won a free entry for the race; finishing his first race in over a year and placing second in the 1450 category.  Adding even more impact was the fact that Miller won a $5,000 raffle compliments of Terrible’s, the host hotel.