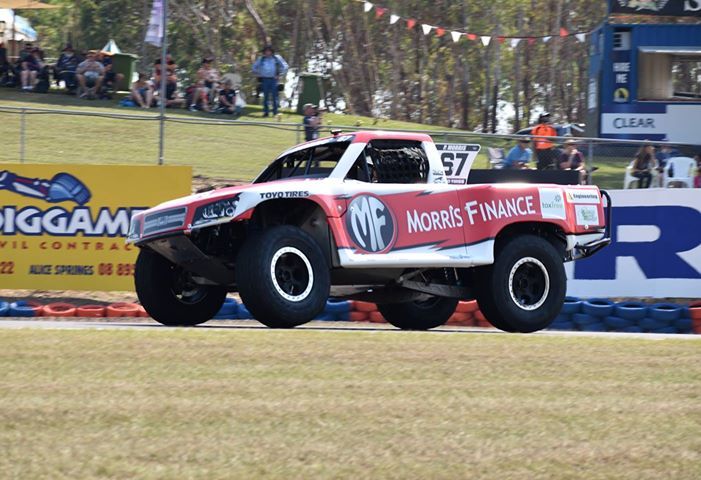 Darwin, Northern Territory (June 16, 2017) – Veteran Aussie driver Paul Morris came into today’s Race 1 in Darwin looking for serious redemption as the last time he was on Australian soil (May/Perth) a last lap tangle with another driver spoiled an over all weekend victory.

With this weekend being the first visit of the SST trucks to fast and technical Hidden Valley Raceway that makes up the 14-turn 1.78-mile (2.85 km) course built for the newly re-named SuperCars series many drivers would struggle to hit their marks throughout the race running off the track into the grass.

However, the two drivers that would have no issues making there way through the field and on track would be Paul Morris of Gold Coast, Queensland and Orange, California driver Robby Gordon. The two veteran racers aggressively charged past truck after truck from their fourth and seventh starting positions respectively to put on a show for the fans at the front of the field the final six laps.

The two iconic racing heroes of Australia and the United States battled back and forth swapping the lead six different times with clean hard racing nearly colliding with each other multiple times. The last lap would see Morris complete a daring move to the inside of Gordon for the final time as the Morris Finance/ SuperCheap Auto No. 67 was just too much for the SafeCraft Safety Equipment entry. Morris would go on to capture the win much to the delight of thousands of screaming Australian Stadium SUPER Truck fans.

DeVILBISS racer Matt Brabham of Gold Coast, Queensland, Australia never paid for a ticket, but had the best seat in the house to view the Morris/Gordon duel. Brabham would cross the finish line behind Gordon in the third position after leading the first two laps of the 12-lap event.

Gavin Harlien of Mesa, Arizona the hottest driver on the SST circuit the last month picking up overall victories at both Detroit and Fort Worth the last two weeks would qualify his Royal Purple Synthetic Oil truck in fourth in his first ever visit to Hidden Valley Raceway. Driving smart and keeping the truck in one piece to capture

Friday Fast Qualifier Jeff Hoffman driving the TruFuel 50:1 truck would advance from his last starting position after the full field inversion to run in the fifth position following his teammate and friend Gavin Harlien the entire race. On a tricky track to pass on for the SST trucks Hoffman would finish the race in the fifth position. Picking up valuable points in the weekend overall chase.

Front row starter Bill Hynes of Nazareth, Pennsylvania whom would feel under the weather upon arriving to Australia would fight thru flew like symptoms to keep the Road Pod Transport Transformed truck on track to finish the race in the eighth spot.

The SST trucks will return to the Hidden Valley Raceway for there second round of the Darwin Supercars weekend on Saturday at 3:10 P.M. local time in front of an anticipated capacity crowd.

Fans can tune into the race by visiting http://www.stadiumsupertrucks.com or by viewing the Stadium SUPER Trucks Facebook Live at http://www.facebook.com/StadiumSuperTrucks