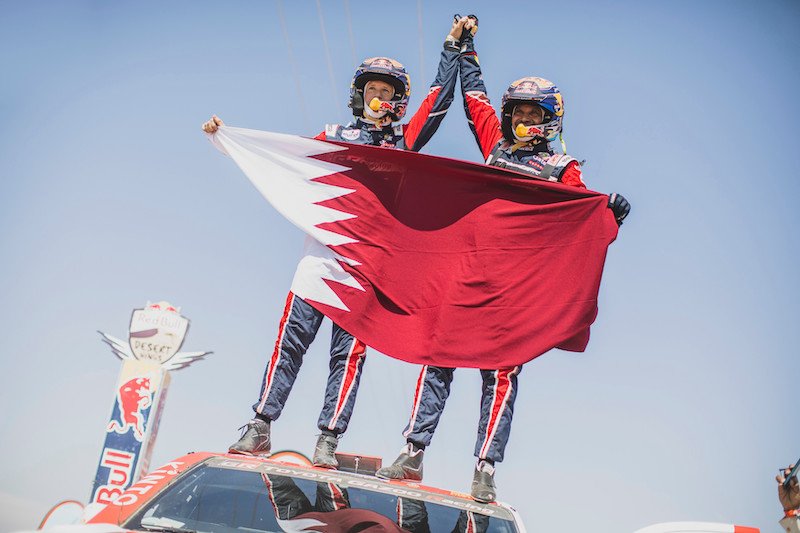 After more than 4,000km of racing over treacherous Saudi Arabian terrain, the 2022 Dakar Rally has ended with the most epic adventure that motorsports has to offer seeing Nasser Al-Attiyah, Chaleco Lopez, Dmitry Sotnikov and Sam Sunderland win titles. Here is all you need to know:

– It was clear that Al-Attiyah was on a car mission from the very first kilometre with the Toyota Hilux T1+ driver and navigator Mathieu Baumel (FRA) taking the lead on the first day and keeping top spot until the end for the Qatari driver’s fourth Dakar title and his first in Saudi Arabia.

– Al-Attiyah was pushed all the way by nine-time WRC winner Sébastien Loeb (FRA), who claimed his third Dakar podium finish, while Carlos Sainz (ESP), Stéphane Peterhansel (FRA) and Mattias Ekström (SWE) all steered their electrical drivetrain-powered Audis to at least one stage win.

– Both Giniel De Villiers (ZAF) and Kuba Przygoński (POL) eventually had to settle for fifth and sixth respectively with Cyril Despres (FRA) getting more miles under his belt for his ambitious Gen-Z project – which hopes to return with a fully hydrogen-powered car – and a successful debut on four wheels for Laia Sanz (ESP) as she finished her 12th consecutive Dakar.

– Lopez (CHL) made it back-to-back side-by-side victories by following up last year’s T4 triumph with an overall win in this year’s T3 category, while Cristina Gutiérrez (ESP) also finished on the podium in third giving the Red Bull Off-Road Junior Team their first ever top-three result at the Dakar.

– A huge slice of history was made by teenager Seth Quintero (USA) who, despite an issue on Stage 2 taking him out of the running for the title, won a total of 12 stages – setting a new record of stage wins at a single Dakar with team-mate Guillaume de Mevius (BEL) winning the other one.

– Sunderland (GBR) once again became champion, recapturing the title that he first won in 2017 – the Dubai-based biker delivering GasGas their maiden Dakar victory as he becomes the first biker to win with different colours since the legendary Richard Sainct (FRA) did it two decades ago.

– Walkner’s KTM Factory team-mates Kevin Benavides (ARG) and Toby Price (AUS) both arrived with high expectations and the pair showed their speed with stage wins, but the podium eluded them.

– Personal goals were met by Štefan Svitko (SVK) and Camille Chapelière (FRA) who finished runners-up in their respective classes, Svitko as a privateer entry and Chapelière in the Rally2 category.

– Regional interest has been high in the performances of both Mohammed Balooshi (UAE) and Mohammed Jaffar (KWT) with both Middle Eastern riders bringing their bikes across the finish line in Jeddah.

– Two-time MotoGP race winner Danilo Petrucci (ITA) completed his first ever Dakar. ‘Petrux’ suffered a few crashes along the way, however also set the fastest time on Stage 5 during an eventful debut.

– It was another entirely dominant performance by Team Kamaz Master in the truck race to keep their Saudi Arabian unbeaten run going as Sotnikov (RUS) made it two wins on the bounce with Eduard Nikolaev (RUS) in second, Anton Shibalov (RUS) third and Andrey Karginov (RUS) fourth.

Nasser Al-Attiyah: “Me, Mathieu and the team all did a great job from beginning until the end. It was very important for me to win because now the rally is in our region.”

Sébastien Loeb: “Some trouble on the third day put us quite far behind. We were able to recover some time, but not enough to win. Second place at the Dakar is not too bad.”

Mattias Ekström: “Finishing inside the Top 10 was our aim before the rally. On our good days we were able to mix it with the big boys and that gets us excited for the future.”

Laia Sanz: “The objective was to finish the rally and we’ve done that. We can take away a lot of positives. There were days when we really found a good rhythm on the stage.”

Chaleco Lopez: “We have been very strong on every stage. We’ve been close to the front each day with no big problems for the car or for navigation. It feels great to win it again.”

Cristina Gutiérrez: “If you told me a year and two months ago that this would happen, I would have told you that it must be a dream.”

Seth Quintero: “Obviously it’s amazing, but I’m also a little bummed out because we’re not in the overall even though we won just about every single stage. It’s been quite the ride.”

Sam Sunderland: “There was a lot of stress today because the times have been really close this year. I’m really grateful to everyone who helps and supports me, I hope this victory can repay some of that. This victory feels even better than the first.”

Dmitry Sotnikov: “The rivalry for victory was going on every day, until the last kilometre it was impossible to relax.”

Eduard Nikolaev: “Kamaz team has gold, silver and bronze and this is the main thing but there is only one champion, so we have something to strive for next year.”