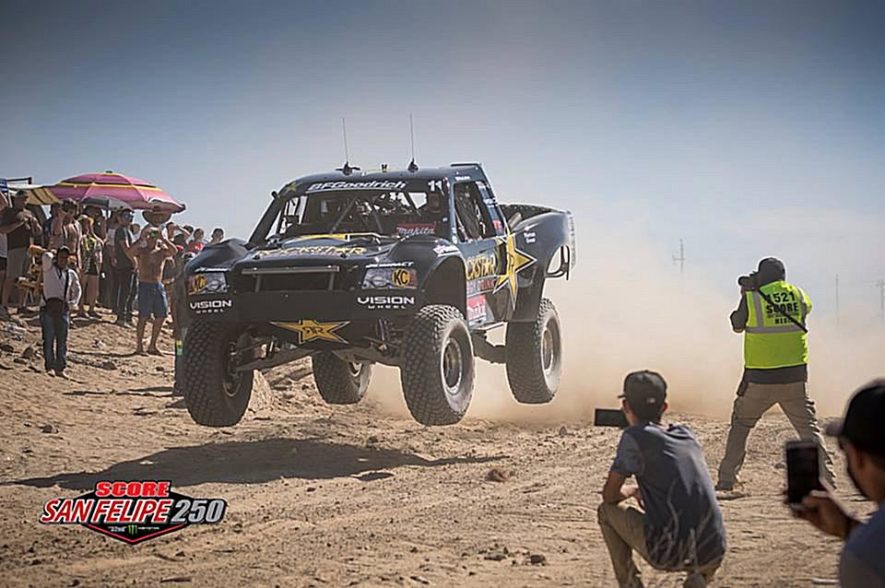 Start/Finish on the Malecon in the heart of San Felipe along Sea of Cortez;
to be televised on ABC World of X Games; deadline for Start Draw–Tuesday, March 26

ENSENADA, Baja California, Mexico – After just two weeks of accepting online racer registration, many of the sport’s top figures are among the first official entries for the upcoming 33rd annual SCORE San Felipe 250 in Baja California, Mexico. The popular ‘Spring Break’ event will start and finish for just the third time on the Malecon in the heart of town along the azure waters of the picturesque Sea of Cortez.

The season-opening event of the four-race internationally-televised 2019 SCORE World Desert Championship will be held April 3-7 in San Felipe, the peaceful fishing village on the Sea of Cortez, 125 miles south of the U.S. Border at Calexico, Calif. All four 2019 SCORE races will be held on Mexico’s magnificent Baja California peninsula for the fourth consecutive year.

Celebrating the 33rd anniversary of the youngest of the three legendary SCORE Baja races, sometimes referred to as the SCORE ‘baby Baja’, entries are being accepted on the SCORE website under Race Info at www.SCOREInternational.com for Pro and Sportsman entries for cars, trucks, UTVs, motorcycles and quads.

Pre-race festivities will be held in San Felipe on April 3, 4 and 5 with race day on Saturday, April 6 concluding with the post-race awards fiesta at Noon PT on Sunday, April 7.

The colorful pre-race contingency and Manufacturer’s Midway, the starting line and the finish line will be on the Malecon in the heart of San Felipe for the third straight year. Contingency will be held on two days for the first time in the history of this race with classes split with some going through the line on Wednesday (April 4) and the balance, including the marquee SCORE Trophy Truck division, going through on  Thursday (April 5).

The deadline to enter in time to be in the drawing for starting positions within each class is 8 p.m. PT on Tuesday, March 26.

BFGoodrich Tires is celebrating over four decades as a major player in SCORE Baja racing. In addition to being the official tire of SCORE International for over four decades, BFGoodrich Tires has now produced the tire of choice for 30 of the overall 4-wheel vehicle winners in the SCORE Baja 1000, including 30 of the last 33 years along with a record-run of 20 straight from 1986 through 2005. In total, BFGoodrich Tires has now be the tire of choice for the overall 4-wheel vehicle winner in 91 SCORE Baja races including 32 in the SCORE Baja 500.

While three racers have three overall victories in the SCORE San Felipe 250, Las Vegas’ Hall of Fame racer Rob MacCachren might have set a standard that will last for a while, unless he breaks his own record of six overall and SCORE Trophy Truck wins.

MacCachren earned back-to-back wins in 2011 and 2012 driving solo and won his fifth in 2017 and his sixth last year driving solo again in his No. 11 MacCachren Motorsports Rockstar Ford F-150.

In the motorcycle/quad classes, two 2018 season point champions are already entered. Mexico’s Santiago Creel is the rider of record on three KTM motorcycles in three classes and a second driver in a vehicle in the Trophy Truck Spec class.

Creel, an international motorcycle rally racer from Mexico City, will be the rider of record on one motorcycle in the Pro Moto Unlimited class, one in the Pro Moto 30 class for riders 30 years and one in Pro Moto Limited, the class he was the season point champion in during both the 2017 and 2018 SCORE World Desert Championship.

For over three decades, the annual motorsports festival that has brought the largest economic impact of any single event held annually in this lightly-populated portion of the rugged, rough and bountifully beautiful Baja peninsula has been the SCORE San Felipe 250.

Under the supervision and direction of SCORE Race Director Jose A. Grijalva and SCORE Tech Director Dan Cornwell with editing and updating by SCORE Ops personnel Lawton Shank and Christine Wait, the 2019 SCORE Rule Book is currently in final review along with the 2019 Rule Book Addendum. All relevant items will be available in the near future on the SCORE website and updated as needed during the year under the race info page.

Here is the four-race 2019 SCORE World Desert Championship and for the fourth consecutive year all races are being held in Baja California, Mexico:

SCORE has confirmed that the 2019 SCORE World Desert Championship will be televised on the ABC TV family of networks, marking the first time back on the ABC network since the 1967 and 1968 coverage of the Baja 1000 on ABC’s old Wide World of Sports show.

SCORE also announced that the inaugural Lucerna SCORE Baja 400 next September will air as a one-hour special on ESPN TV.

Hall of Fame racer Cameron Steele’s popular ‘Trail of Missions’ show has been shown as part of ABC’s World of X Games series for the past several years.

For more information regarding SCORE, visit the official website of the SCORE World Desert Championship at www.SCOREInternational.com.