In the current era of off-road racing, energy drinks and their branding have become more and more prevalent through the years and have created a huge rivalry just as the factory backed race teams had in the late 80’s and early 90’s.  Not only are the energy drink wars breaking new ground in the world of off-road racing and helping push this sport into the mainstream, but recent owner of SCORE International Roger Norman is also breaking new ground.  With a “for racers, by racers” motto, CEO of SCORE International Roger Norman has listened to the racers and helped elevate off-road racing once again.  For the first time ever in SCORE International’s history, 39 Trophy Trucks and 21 Class 1 racer’s went balls to the wall on a man made qualifying loop in an attempt to capture the number one starting position at the 45th annual running of the Tecate SCORE Baja 500.  Prior to Norman’s acquisition it was purely luck of the draw, it didn’t matter how fast you were or how much talent was behind the wheel, your fate was determined by a number out of a hat.

Taking full advantage of the opportunity to qualify, NASCAR star and owner of Stadium Super Trucks Robby Gordon was hell bent on making sure he was at the front of the pack.  Robby Gordon is undoubtedly one of the fastest guys to ever race in an off-road race vehicle and he proved just that as he drove the Speed Energy Trophy Truck #77 to the first place qualifying position at the 45th annual SCORE Tecate Baja 500.  A threat was imamate as there is a distinct disadvantage to being the first person on the road at the start of such a long race.  Starting directly behind Gordon was the Cupertino California young gun Jason Voss, and the two-time Baja 500 winner and driver of the Red Bull Trophy Truck #70 Bryce Menzies. 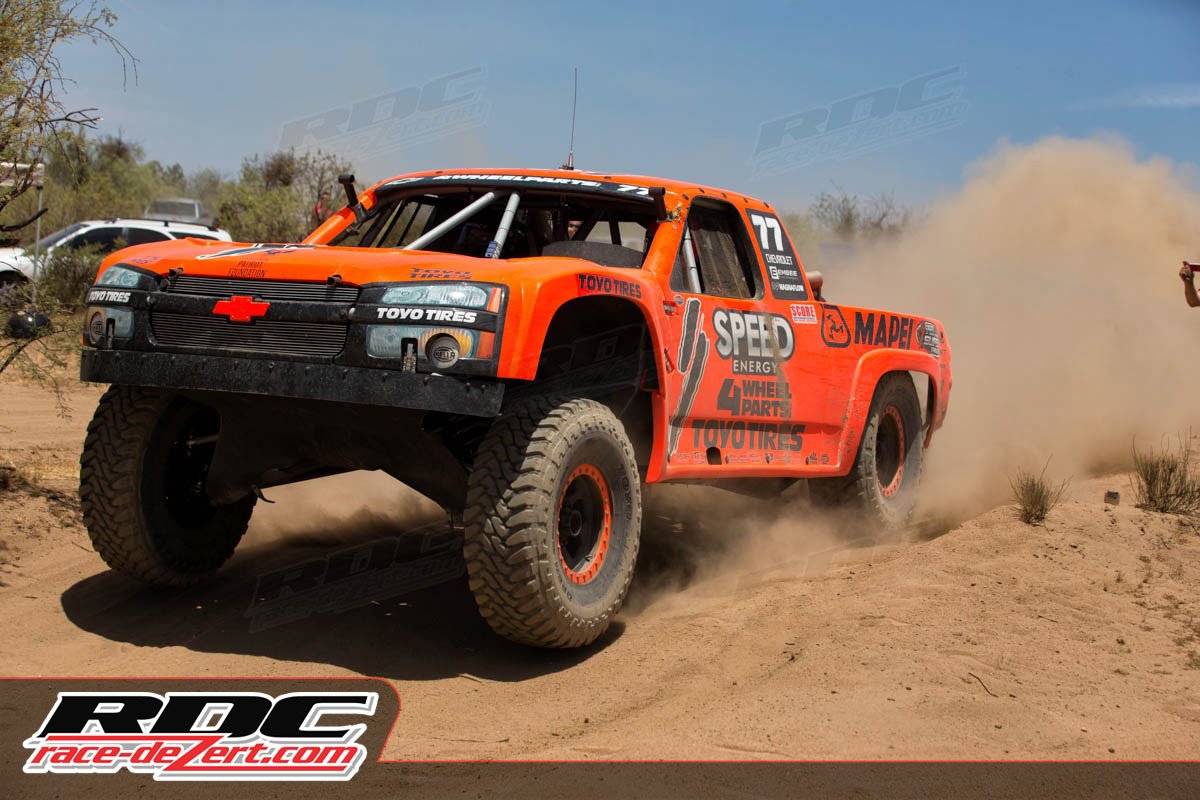 Tens of thousands of Mexican nationals and off-road race fans from around the world filled the streets of Ensenada Mexico for what we typically call contingency, the people of Mexico consider this extravagant event of vendors and racers signing anything they can get their hands on; a national holiday.  As the race vehicles rolled though contingency one by one, each vehicle was one step closer to racing in the SCORE Tecate Baja 500.

The stage was set, the motorcycle and quad riders had left town hours prior and Robby Gordon was in position to take the green flag for the 2013 SCORE Tecate Baja 500.  The clock hit 10:30am and the green flag waived, Gordon left the line at break-neck speed and energized the countless onlookers in the streets of Ensenada Mexico.  Shortly after Gordon left the starting line there was no stopping the flow of angry 800 horsepower 7,000-pound beasts in which we call Trophy Trucks. The completion left the starting line one by one in an attempt to run down the Speed Energy #77 of Robby Gordon.

Gordon’s clean air and high hopes of a flawless run were short lived just beyond the starting line.  Gordon managed to hit a large puddle of sewage water that had flooded the wash by a few locals that wanted to see some more action causing Gordon to spin the #77 on a dime at over 90mph.  Robby Gordon found himself facing the wrong direction on the course and struggling to get turned around in about 3 feet of crap, literally.  Jason Voss was hot on his tail and able to creep by Gordon as he was trying to free himself from the mess and continue his trek out of the streets of Ensenada.

Jason Voss would go on to lead the first 165-miles of the 501-mile loop through the Baja California peninsula.  Unfortunately for Voss that is where his day would end, Jason Voss would go down with mechanical failure which would immediately take him out of the race and leave the door wide open for Robby Gordon and Bryce Menzies who were in full attack mode.  Also on the attack was Monster Energy teammates “Ballistic” BJ Baldwin and Tim Herbst, closely followed by Mexican national Juan Carlos Lopez.  After suffering a power steering failure, Bryce Menzies moved from 1st place on corrected time to 8th place in the blink of an eye. 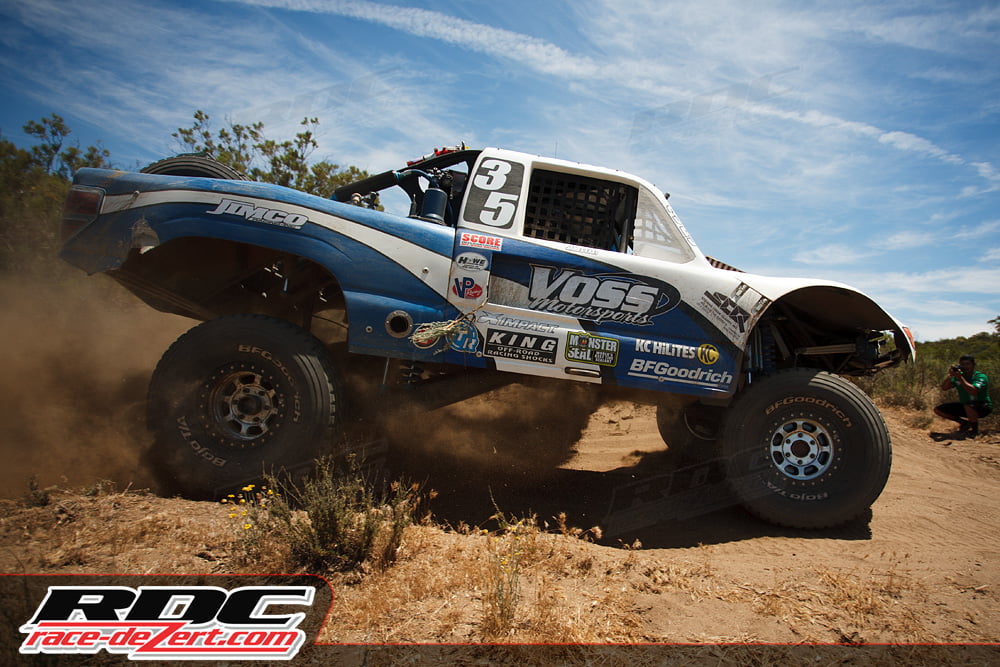 Robby Gordon and BJ Baldwin would battle back and forth for hundreds of miles as they headed north back to Ensenada up the Pacific side of the Baja California peninsula.  Within striking distance, BJ Baldwin encountered a part failure within his brake pedal and had to rely on his crew to get the $2 bolt out and replaced so he could get back on the road in order to hunt down Gordon once again. 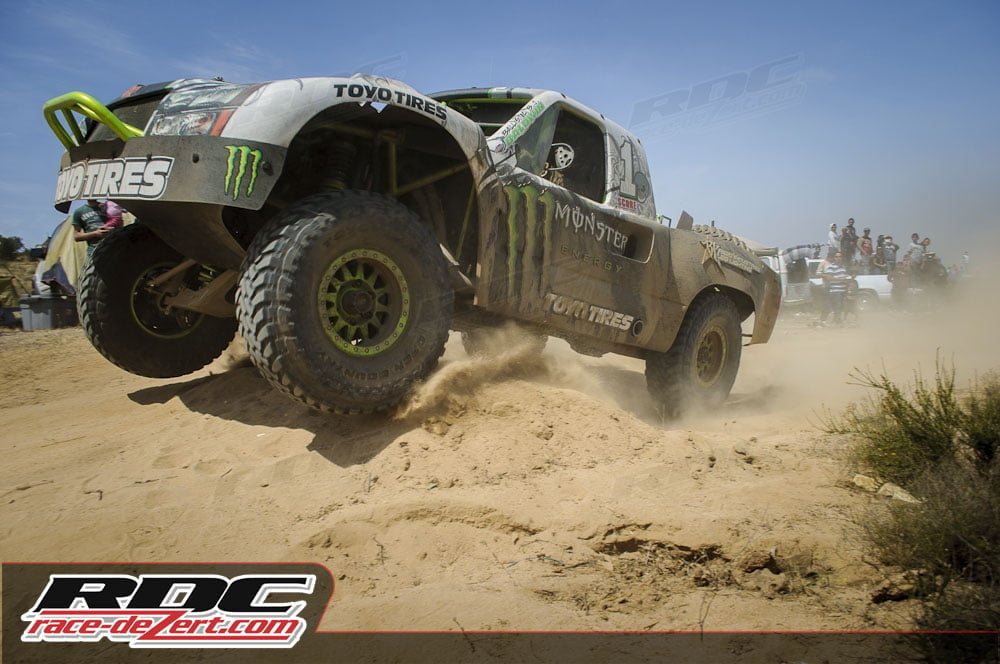 With a little over 100-miles of race course left, Robby Gordon was the first truck on the road and had just over a six minute lead on BJ Baldwin, this is right where Gordon wanted to be coming into the finish back at Ensenada.

Robby Gordon and the Speed Energy Trophy Truck #77 would cross the finish line just after sundown Saturday evening with an elapsed time of 10:05.43, nearly 9 full minutes (on corrected time) ahead of the Monster Energy Trophy Truck #1 of BJ Baldwin.  The Red Bull #70 and 2011/2012 SCORE Baja 500 winner Bryce Menzies would come up just short in 2013 left to settle for a very respectable third place finish with a time of 10:22.20.

As if the rivalries between energy drink companies in off-road racing weren’t heated enough, the 2013 Tecate SCORE Baja 500 just added fuel to the fire come time for the legendary SCORE Baja 1000.

A
Adam "Gunnslinger" Gunn
This short piece was riveting! Tying in the energy drink market only added to the desire to learn how it must have been "out there" along the race course.

We are blessed to have a host of impressive corporate sponsors, which lends testimony to the beloved sport we so deeply appreciate. Having stated the obvious, let's have a quick look back to the first few minutes when the first Trophy Truck left the Start
..

Imagine - if you will - the unthinkable pall that would have clouded the event had Robby Gordon taken out a group of spectators when he launched the No. 77 in to the lake of sewage....

This issue of booby traps is nothing new to us; that SCORE was either unaware of its existence or worse, knew about it and did nothing to alert or warn drivers, is chilling indeed. Eventually there will come a day when we will have an accident which could have been avoided, but because SCORE did nothing, to mitigate it, the excitement of off-road racing in Baja California and the tons of money corporate sponsors generously provide will vanish....
Best in The Desert "keepin it stateside " gotta love Nevada