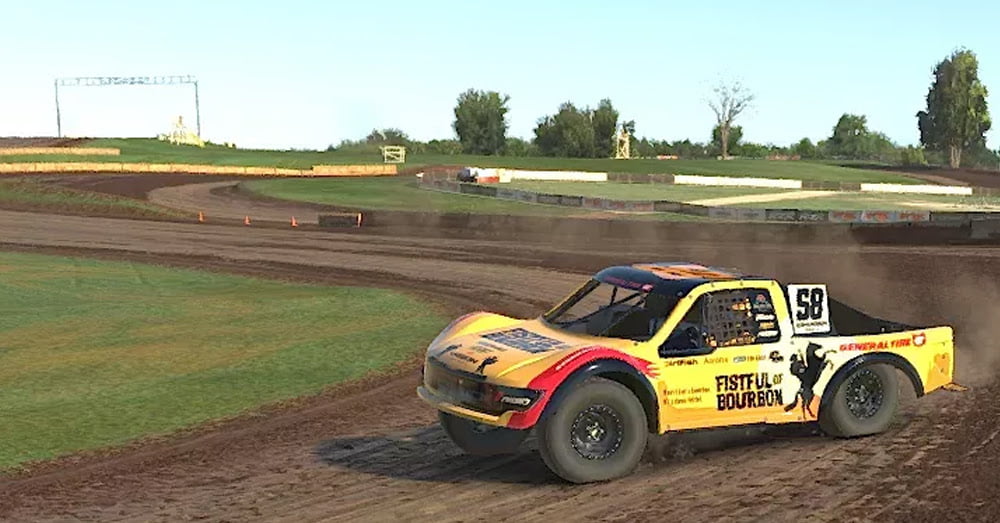 The second annual Jim Beaver eSports eShort Course Triple Crown will take advantage of iRacing’s newest off-road content release for its next round, heading to Bark River International Raceway for the first time on Thursday, April 15. Racers will take the wheel of iRacing’s virtual Pro 4 short course truck in hopes of joining the five drivers who have already earned their way into the 2022 eShort Course World Cup. Signups are open now and can be accessed here.
“Coming off of the biggest eShort Course event in history, we’re excited to welcome a brand new track to the series with Bark River International Raceway,” said Jim Beaver eSports owner, professional off-road racer, and nationally syndicated radio host Jim Beaver. “I’ve been excited for Bark River to make its iRacing debut since the track was first scanned, and being able to run our first event there as part of the Triple Crown is incredibly exciting. I can’t wait for us to drop the green flag next month!”
Bark River International Raceway made its iRacing debut earlier this month after being scanned in late 2019. The Michigan-based track is one of the most familiar short course circuits in the world, hosting an annual event in mid-August that draws tens of thousands of spectators every year. The track will resume hosting real-world race events later this year after the COVID-19 pandemic forced the cancellation of last year’s race.
The remainder of the eShort Course Triple Crown, and all eShort Course events except for the World Cup moving forward, will feature a brand new rules package. The Pro 4 Triple Crown round at Bark River will mark the debut of open setup racing in eShort Course events, as previous events have locked all competitors to a fixed truck setup. The event will accommodate a maximum of 48 qualifiers running up to three heats and up to two last chance qualifiers, with the top six starters inverted in each heat and the top 12 starters inverted in the 24-truck final. Only the winner of the event is guaranteed a 2022 eShort Course World Cup berth, but the remaining podium finishers may punch their own tickets in subsequent eShort Course events with additional podiums.
Earlier this year, the General Tire eShort Course World Cup marked the national television debut for eShort Course on the CBS Sports Network, in a broadcast produced by iRacing in conjunction with Jim Beaver eSports. Real-world short course driver Holden Heitritter was the overall event winner, while fellow short course racers Luke Knupp and Connor Barry, former Baja 1000 winner Alan Ampudia, and sim racer Bobby Rafferty earned the other four guaranteed spots in the 2022 eShort Course World Cup.
The Jim Beaver eSports eShort Course Triple Crown event at Bark River International Raceway will stream live on Jim Beaver’s Facebook page on Thursday, April 15. Click here to sign up for the event. Information on the final eShort Course Triple Crown round and subsequent eShort Course events will be released in the coming months.
For more information on Jim Beaver eSports, follow the team on Facebook, Twitter, and Instagram or visit www.jimbeaveresports.com. For more information on iRacing and for special offers, visit www.iracing.com.
About Jim Beaver
Jim Beaver is a professional off-road racer, nationally syndicated radio host, and TV personality. A 3rd generation race car driver who is currently competing in off-road’s premier Trick Truck division as well as being a factory Polaris RZR driver in the Polaris RZR Star Car. His radio show, the Down & Dirty Radio Show Powered by Polaris RZR, is the #1 motorsports radio show in the United States on iTunes, and is syndicated to 200 AM/FM networks domestically and available internationally on the American Forces Network. He has been instrumental in pushing off-road and action motorsports to mainstream America through various television, radio, print, and online appearances while actively competing in and covering the events. He can be followed online at @JimBeaver15 on Facebook, Instagram, and Twitter. More information on the Down & Dirty Radio Show can be found at www.DownAndDirtyShow.com, or by following @DownAndDirtyShow on Instagram.