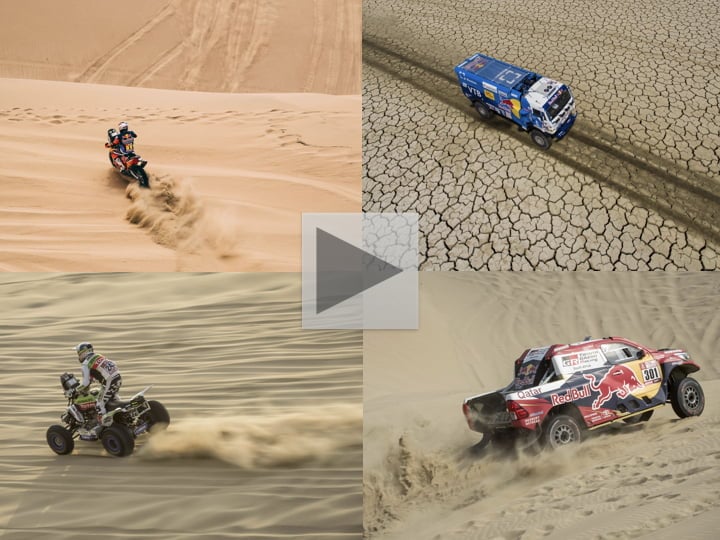 We’re now three days down at the 2018 Dakar Rally and we’re deep into the deserts of Peru. What is shining through as bright as the South American sun are those competitors who have seen and done it all before. The bike, car, truck and quad races are all being led by previous winners of the Dakar as the convoy arrives in San Juan de Marcona.

Sam Sunderland (GBR) has won his second stage of this Dakar to regain the lead of the race which he had briefly lost to Joan Barreda (ESP). Spanish rider Barreda made a number of navigation mistakes on the Peruvian dunes as the bikers opened the stage three route. Sunderland ended up close to 30 minutes quicker that Barreda as the British biker took a big step towards defending his two-wheel title today.

“The Dakar’s like this, you have to try and be consistent every day. I’m a bit angry at myself for missing that drop at the end, but one drop out of a thousand is not so bad.” – Sam Sunderland

“The pace is definitely here and we know we can still run at the front.” – Toby Price

Some minor navigational mishaps came the way of KTM trio Matthias Walkner (AUT), Antoine Méo (FRA) and Laia Sanz (ESP) but they all remain on course to achieve their pre-race targets.

Click here to find out who won the pre-race war of words in the Red Bull KTM Factory Team camp.

The experience of 13-time Dakar winner Stéphane Peterhansel (FRA) is coming to bare in the dunes of Peru. “Monsieur Dakar” took charge of the 296km timed special stage between Pisco and San Juan de Marcona to finish stage three on top of the car race general classification. Peterhansel caught up with Peugeot team-mate Cyril Despres (FRA) early in the stage and proceeded to take on the task of navigating from the front.

“We did not drive the stage on full attack, just with a good speed.” – Stéphane Peterhansel

The fastest car of the day belonged to Nasser Al-Attiyah (QAT) and his second Dakar stage win of 2018 has propelled him to third place in the overall rankings. The Qatari had one tyre come out of the rim and suffered a puncture but was still able to close the gap to the leaders today, even if he would have liked to have made up even more time.

“There’s still a long way and we believe our Toyota Hilux is a good car and we’ll do our best like we did today.” – Nasser Al-Attiyah

Five-time bike race winner Despres sits between Peterhansel and Al-Attiyah in second place in the car category. Peterhansel and Despres also have their Peugeot team-mates Carlos Sainz (ESP) and Sébastien Loeb (FRA) in touch with the top of the leaderboard along with the Toyota Hilux of Giniel De Villiers (ZAF).

“It’s really difficult to find a rhythm, because sometimes you gain confidence over very flowing flat dunes and then suddenly after three, four or five kilometres it’s one which is broken and you cannot see.” – Sébastien Loeb

Football manager André Villas-Boas (POR) is enjoying a great start to his Dakar debut and sits in 41st overall after three days of racing. Find out more about AVB and why the Dakar is in his blood.

There’s no denying the strong position that Kamaz trucker Eduard Nikolaev (RUS) has put himself in after three stages. Nikolaev is not only the defending truck race champion, but is chasing a third title as a driver. It’s so far, so good as he leads the truck category.

It’s hard to image how the 2018 Dakar could have started any better for quad biker Ignacio Casale (CHI). The Chilean former Dakar winner is head and shoulders above the competition as three stage wins have given him a gap of over 25 minutes between himself and his nearest rivals.

“I’ve been training hard for this race for a long time and I’m feeling the benefit of that now.” – Ignacio Casale

Tomorrow’s action starts down on the beach at San Juan de Marcona with the cars setting off in rows of four (Al-Attiyah and three Peugeots on the front row) and bikes heading out 15 at a time. The 330km timed special stage will loop the competitors back to the bivouac. Expect navigation errors to play their part in creating and reducing gaps at the front of the field once again.

The 40th edition of the Dakar Rally takes place from January 6 until January 20. Watch daily updates of all the action from South America at www.RedBull.com/Dakar.

Sam Sunderland #1: “It was good. On the first loop I felt really strong, but then the second loop was a bit tricky in a few spots. I managed to miss one drop in the dunes and had a small crash which was a bit scary. I was trying to push today; that was my plan. There were a few mistakes there and it was really difficult going on and off the common tracks from yesterday. It was really confusing and you really had to pay attention to the course in the roadbook. But all-in-all it was a good day. The bike was good and we’re safe for another day. The Dakar’s like this, you have to try and be consistent every day. I’m a bit angry at myself for missing that drop there, but one drop out of a thousand is not so bad.”

Toby Price #8: “Today was not so bad. It was definitely difficult with the navigation and stuff. We had a couple of small crashes and I blew the end of my camel back, so I’m a little bit dry at the moment. The navigation tower wasn’t rolling my roadbook through, so I was having to do it manually sometimes. It was a little bit difficult in that second part, but we’re here and that’s the main thing, so we’ll just see how the rest of the rally goes. The pace is definitely here and we know we can still run at the front. We’re going to make sure we look after the bike, look after ourselves and avoid making those little crashes where the bike kind of chased me a little bit and landed on top of me a bit. We’re here at the finish of day three, so now it’s day four to go.”

Stéphane Peterhansel #300: “It was a very beautiful stage again. It was complicated because there were a lot of dunes again. The navigation was a little bit easier this morning because the bikers started first this morning. They navigated really well so most of the time we followed the lines of the bikers and normally they were really good. We did not drive the stage on full attack, just with a good speed, but never on full attack.”

Cyril Despres #308: “We got caught out in the early part of the stage, which meant that we had to brake hard and went into a dune. That actually calmed us down out a bit, so it was a good wake-up call! We were first on the road today and kept a good rhythm despite that. Stéphane eventually got past us and we were able to run together for a bit. This is Peru: these stages are so complex that you always have to be on your guard, going quickly when you can and slowing down when it’s necessary. We’ve got off to a good start and now we just need to keep going like this!”

Nasser Al-Attiyah #301: “We had two flat tyres: today and on morning one, on the short stage, and we had one today before thirty kilometres. We lost around three minutes, but it was not a big deal. We won the stage, which was good. We needed to push, but not really crazily. It was not a big push, because the road really isn’t easy and very dangerous in places. It was a good performance and I’m quite happy to win. It’s no problem. There’s still a long way and we believe our Toyota Hilux is a good car and we’ll do our best like what we did today. It’s good, except for yesterday when we opened which was very difficult for us because there were no lines, but I think we are in a good way now.”

Sébastien Loeb #306: “It’s really difficult to find a rhythm, because sometimes you gain confidence over very flowing flat dunes and then suddenly after three, four or five kilometres it’s one which is broken and you cannot see. So, it’s really tricky. We really can only trust what we see. Maybe I don’t have the experience to read the desert; I don’t know… but I’m driving carefully”.

Giniel De Villiers #304: “Today’s stage was pretty much the same as yesterday. Quite tricky, maybe not as hard as yesterday. The first part we caught Loeb (Sébastien) and then we were right behind him and I was in his dust and had to drop back. We didn’t push at a crazy pace and was a little but cautious in the dunes in the second part, where you couldn’t really see. The car went well. There is still a long way to go. We will see what happens tomorrow.”

Ignacio Casale #241: “I’m feeling very content with my Dakar so far. I’ve been training hard for this race for a long time and I’m feeling the benefit of that now. This was not an easy stage today but I found a good rhythm and I was able to stay in control the whole time. I had a small problem with my fuel tank out there but it didn’t cost me too much time. I’ll work with my team tonight to find a solution to that problem and hopefully tomorrow will be another good day for us.”