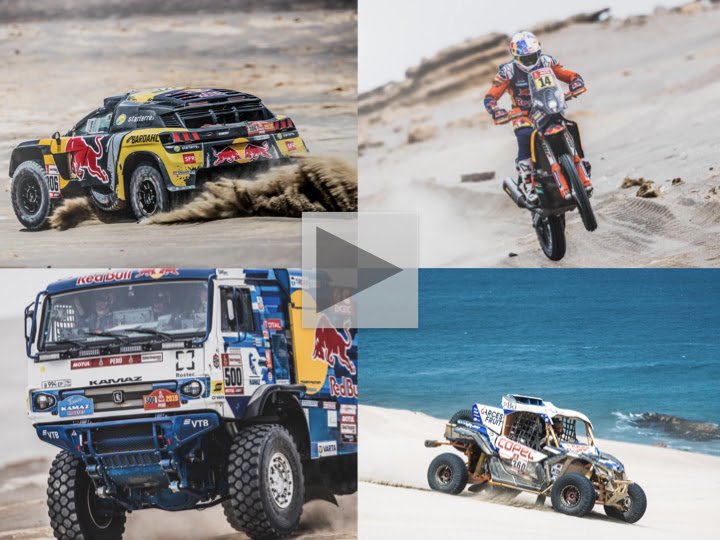 With proud records to protect at the Dakar Rally there was a growing sense of ‘now or never’ in the bivouac before stage eight. With the finish line fast approaching, big moves were required to upset the balance of the leaderboard. A big move is exactly what took place in the bike race as the Super Ica stage took place at Dakar.

The Red Bull KTM Factory Team arrived in Peru a fortnight ago with a clear mission objective – win their 18th consecutive bike race title. At the conclusion of stage seven their best placed rider Toby Price (AUS) was third overall, behind rivals on Honda and Yamaha machinery. On stage eight the picture changed dramatically.

Race leader Ricky Brabec (USA) saw his Dakar end on stage eight due to a broken engine. Pouncing on the opportunities that presented themselves in the dunes was 2016 Dakar winner Price. Third place on today’s stage has put the Australian at the top of the general classification. A remarkable achievement given that he has been nursing a broken bone in his wrist throughout the rally.

“I knew I had to make today count so I gave my maximum out there. I couldn’t do anymore than I did out there. The wrist is on fire now.” – Toby Price

After getting the better of both Honda and Yamaha rivals today, now Price’s closest competitor is the Husqvarna bike of Pablo Quintanilla (CHI). Quintanilla is just a minute behind Price while the Australian’s KTM team-mates are both five minutes further back as Matthias Walkner (AUT)and Sam Sunderland (GBR) are placed third and fourth overall respectively.

“There’s still two long days to go and everything can happen at the Dakar.” – Sam Sunderland

A crash on stage eight brought the 10th Dakar participation of Stefan Svitko (SVK) to a premature end. The 2016 bike race runner-up was eighth overall when misfortune struck on the Super Ica stage.

The latest episode of Dakar Daily covers all the stage eight action in the dunes and in the bivouac, watch it on Red Bull TV right now.

In the car race there was a fourth stage win for Sébastien Loeb (FRA) and co-driver Daniel Elena (MON). The duo showed their customary impressive speed over the dunes to get themselves back in the game after a tough stage yesterday. Loeb’s most recent stage win puts him third overall, and just 16 seconds behind Nani Roma (ESP) in second place.

“It was a very good day. Just a puncture in kilometre six where we had to change the wheel was the only big issue.” – Sébastien Loeb

Continuing to lead the car race is Nasser Al-Attiyah (QAT) and co-driver Mathieu Baumel (FRA). The Toyota crew have been using all their rally-raid knowhow in the second week of the race to consolidate their position at the head of the contest. Al-Attiyah’s lead over Roma stands at 46m29s

“We were surprised when we got the finish line to see that we had increased our lead.” – Nasser Al-Attiyah

It was a tough Super Ica stage for all three X-raid MINI JCW Team drivers: Stéphane Peterhansel (FRA), Cyril Despres (FRA) and Carlos Sainz (ESP). This trio of multiple Dakar winners all conceded time to their rivals in the Peruvian dunes.

“A difficult, difficult day. We got stuck in the dunes and we couldn’t lift the car with the jack. Then we lost the power steering. I did not have power steering for about 200 kilometres. It was an amazingly tough day.” – Carlos Sainz

Jump in the cab of a Team Kamaz Master truck here

Eduard Nikolaev (RUS) was thankful of the big cushion he had previously built up in the truck race today. The Team Kamaz Master trucker got stuck in the same dune section that cost time for Despres and Sainz. Nikolaev ended up conceding nearly an hour as well as his lead to his team-mate Dmitry Sotnikov.

“Crazy day today. Today we got stuck in the sand in a very difficult place. We lost time, 55 minutes.” – Eduard Nikolaev

The astonishing comeback of Chaleco Lopez (CHI) in the SxS/UTV category continues at an electric pace. The Chilean led the race in the first week before tumbling down the rankings after mechanical issues in the dunes before the Rest Day. Now Lopez is back on top and in pole position to win the Dakar on his SxS/UTV debut.

If the competitors still in the race weren’t feeling dizzy enough already, tomorrow’s 313-kilometre loop around the Pisco bivouac may just push a few over the edge. We’re still deep in the Peruvian dunes as the leaders try to hold position, while their rivals launch attacks in the desert.

Matthias Walkner: “In the dunes I tried to push because in the early part of the stage in the stones I was not feeling so comfortable.”

Toby Price: “I knew I had to make today count so I gave my maximum out there. I couldn’t do anymore than I did. The wrist is on fire now. It’s been a long stage, 360 kilometres, but we’ve made it here to the finish. There’s only two more days to go and this is a good thing. Managing the wrist is tough, you just have to try to shut it off. There’s times when you can rest it and times when you can’t. When you throw your helmet on and go ride your bike you just want to do the best you can, and that’s what I’m doing.”

Sam Sunderland: “I had a problem with the Iritrack at the beginning. Fortunately it was quick to fix, but it did put me in the dust of the cars. I pushed a lot and I feel OK. There’s still two long days to go and everything can happen at the Dakar. Today we saw (Ricky) Brabec’s race end and that’s a shame for him. I’m sure we’re going to see lots more happening in these next two days.”

Luciano Benavides: “I was the fourth bike in the dunes so I needed to keep focused on the navigation. I did pretty good today, I didn’t get lost and that was the important thing for me today. Overall, it was a good stage and I had a lot of fun. It was a really fun day, and it’s great to be learning so much each day.”

Daniel Nosiglia: “Today was a good stage. We had lots of fog at the beginning and that made things dangerous, but in the second part we had so much sand and dunes. This was very enjoyable.”

Laia Sanz: “It was a long day today. On the first part of the stage I was riding slow because it was so tough to see in the fog. We took it easy there. Then when we arrived in the dunes I was able to enjoy it more.”

Sébastien Loeb: “It was a very good day. Just a puncture in kilometre six where we had to change the wheel was the only big issue. We also made a little mistake on one waypoint, we lost two or three minutes there. Two more stages to go, we’ll see what we can do.”

Nasser Al-Attiyah: “So Stéphane (Peterhansel) started 30 minutes in front of us today so we didn’t know how his time was. In this situation you don’t know if you’re faster or slower than your rival, it’s a complicated situation to manage. We were surprised when we got the finish line to see that we had increased our lead. We had a slow puncture, but no big problems again today. Now there’s two days left so we’ll just try to keep going like this.”

Kuba Przygonski: “There were a lot of soft dunes, with lots of stones. We were pushing and were happy with how it went. We were trying to catch (Giniel) De Villiers. I felt like we were on the maximum of what we could do today.”

Giniel De Villiers: “Very difficult stage today. We had puncture quite early on, after just nine kilometres. It was my mistake, I just came over a crest too fast and hit a rock. Then there was some really tricky navigation towards the end of the first special because we arrived as the fourth car. Then the second part was just dunes and dunes and more dunes. Visibility was difficult so there was a lot of concentration needed. We got stuck for a couple of minutes on top of one dune, my mistake again. Nasser (Al-Attiyah) did a great job today and we’re not too far behind him, so it’s been a good day.”

Stéphane Peterhansel: “It was not an easy stage this morning. The first part was really fast and we overtook a few motorcycles. We entered into the dunes first so doing the navigation was really complicated. There were no lines to follow. We got stuck and lost around 10 minutes. After that we continued to push until we got stuck again and lost another 10 minutes. The sand was really soft and it was not easy to anticipate the good lines.”

Cyril Despres: “Right from the beginning in Lima it has been tough, but today was even harder than what has come before. After 50 kilometres we lost one gear and at kilometre 60 we lost another gear. I honestly thought that we would not reach the finish line today. So on one hand it’s good to be here, but it was such a hard day for us. At one point we were stuck in the dunes for nearly an hour.”

Carlos Sainz: “A difficult, difficult day. We got stuck in the dunes and we couldn’t lift the car with the jack. Then we lost the power steering. I did not have power steering for about 200 kilometres. It was an amazingly tough day.”

Eduard Nikolaev: “Crazy day today. Today we got stuck in the sand in a very difficult place. We lost time, 55 minutes. Then we continued on the stage, it was all very difficult. Big dunes and a lot of loose sand. Very, very difficult.”