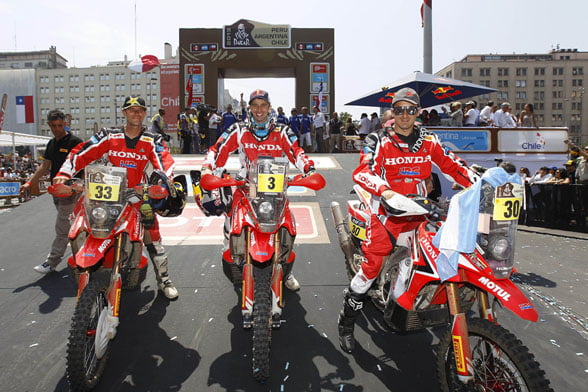 A huge crowd gathered in Plaza de la Constitucion in front of Santiago’s Palacio de la Moneda to celebrate the arrival of the protagonists of the 2013 Dakar.

All in all 124 bikes, 26 quads, 89 cars and 60 trucks for a total of 229 vehicles, out of the 449 that were at the starting blocks in Lima, made it to the finish and they paraded this morning for the final picture on the podium. Tough and unpredictable till the very end, this year’s Dakar was a great success in terms of the number of competitors and spectators.

The President of Chile, Sebastiàn Piñera, personally welcomed the champions as the Dakar finished for the first time in the Chilean capital. A huge crowd gathered in Plaza de la Constitucion in front of Santiago’s Palacio de la Moneda to celebrate the arrival of the protagonists of the 2013 Dakar.

The complete HRC Team  celebrated the arrival  on the podium with HRC President Tetsuo Suzuki.  He congratulated Helder Rodrigues, Javier Pizzolito and Johnny Campbell, who finished respectively 7th, 8th and 40th in the overall classification. 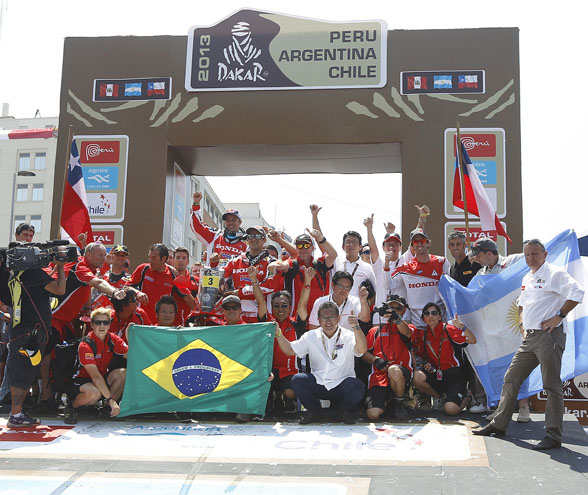 “I’m very proud of this team”, said Tetsuo Suzuki, “all three riders  completed the whole rally and everybody worked so hard to get the best possible result. Dakar has a special fascination as it is the toughest rally in the world and requires machine reliability, strong riders and strategic team work. This year’s results are promising and we will continue to work on the development of the CRF 450 Rally to return stronger next year. I would like to thank our riders, the team members, all our sponsors and partners and also the organizers of the event. My thoughts also go out to all the Honda fans around the world who have supported Team HRC in their Dakar debut with a new team after 24 years. They have followed Helder’s, Javier’s and Johnny’s amazing rides throughout 14 stages and 8,420 kilometres from Lima to Santiago. We are very motivated and we will be back to try and win next year”.  &nb sp;
After the podium photo and the interviews, HRC riders can finally enjoy a well deserved rest, while the team is already back to work as all assistance vehicles and bikes need to be ready and on time to be shipped back to Europe and Japan”.