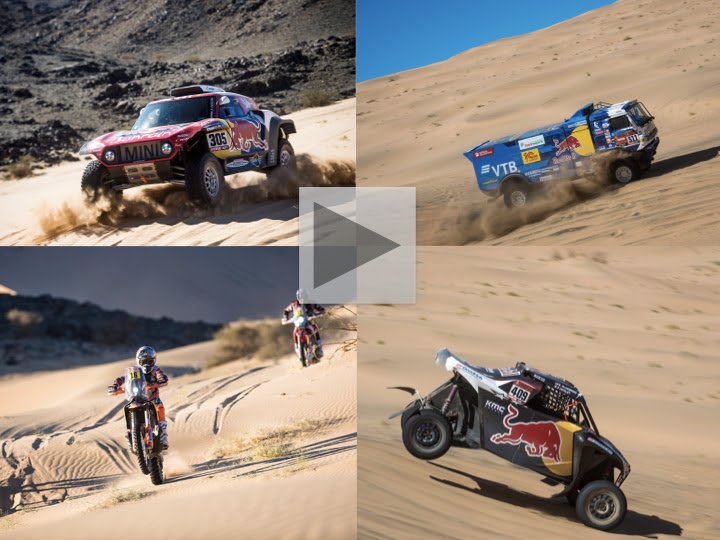 The 2020 Dakar Rally has burst into life with an opening stage that gave competitors a stern wake up call – 319 kilometres against the clock. The first ever Dakar stage to be held in Saudi Arabia represented a new start for all 342 vehicles entered into the rally. As well as a few familiar faces taking early leads, we also have a crop of intriguing newcomers to keep an eye on.

It was an pre-sunrise start for the Dakar convoy after Saturday night’s Start Podium in the city of Jeddah. The bikes set off first on the desert route to Al Wajh, followed by the quads, cars, side-by-sides and finally the trucks.

The opening bike stage win went to reigning champion Toby Price (AUS). Despite his roadbook locking up on him, and then tearing completely, he was still able to post the fastest time of day. Just five seconds back from Price is Ricky Brabec (USA), followed 35 seconds later by Matthias Walkner (AUT).

“Once the roadbook has gone you’re pretty much driving blind.” – Toby Price

Price and Walkner’s fellow Red Bull KTM Factory Team riders, Sam Sunderland (GBR) and Luciano Benavides (ARG), are also well placed within the Top 10 after the first day of racing. If the team are going to extend their remarkable record of 18 consecutive Dakar wins, they’ll need one of this foursome in top spot after stage 12.

The surprise winner on the opening day of the car race is Vaidotas Zala (LTU) who led home a star-studded field of offroad competitors. While Zala holds the overnight lead he will be aware of 13-time winner Stéphane Peterhansel (FRA) breathing down his neck in second overall.

In third place is Peterhansel’s fellow MINI Buggy driver Carlos Sainz (ESP), just one place ahead of defending car class champion Nasser Al-Attiyah (QAT). Al-Attiyah led the stage for most of the day before a succession of punctures plagued his Toyota Hilux late in the stage.

“We had three punctures to stop and fix. We had to stop every two or three kilometres to fix a rear wheel, very strange.” – Nasser Al-Attiyah

Aron Domżała (POL) is the first side-by-side driver to register a stage win at the 2020 Dakar. However, defending SxS champion Chaleco Lopez (CHI) is less than seven minutes behind in fourth place.

It was a mixed opening SxS stage for the members of Red Bull Off-Road Team USA. Mitch Guthrie Jr. (USA) scored a Top 10 on his first ever Dakar stage while his team-mate Blade Hildebrand (USA) is looking to claw back 35 minutes on Domżała and the other frontrunners on the coming stages.

“This was my very first Dakar stage and it feels great to just get over the line.” – Mitch Guthrie Jr.

The coaching crew of Cyril Despres (FRA) and Mike Horn (SUI) were placed in the Top 5 of the SxS race in their 1000cc OT3 buggy up until kilometre 254 of the stage. For the final 60 kilometres of the stage their progress was hampered by overheating issues, but they battled on to cross the finish line.

“I have to say the terrain was beautiful; mountains, rocky areas, riverbeds and the most amazing passage through the dunes. You could really see the variation of the terrain that makes this rally so special.” – Mike Horn

Over in the truck race it hasn’t taken long for Team Kamaz Master to scale the leaderboard. Anton Shibalov (RUS) leads the race with his three fellow Kamaz drivers all well positioned to assert their dominance over the early rounds of this first Saudi Arabian Dakar.

There looks to be a battle Royale shaping up in the quad category. Two-time winner Ignacio Casale (CHI) took the opening stage and leads another former champ Rafał Sonik (POL) by 5m36s at the summit.

“Navigation was tough today and I can see that being a feature of this race.” – Ignacio Casale

After an overnight stay in the Al Wajh bivouac, the Dakar moves off to Neom in northwestern  Saudi Arabia. The timed special stage of 367 kilometres will offer the riders spectacular views of the Red Sea as well as plenty of navigational challenges along the way.

Toby Price: “It was a bit of a strange day. My roadbook locked up on me so it was lucky in one way that I caught Matthias (Walkner) at the same time. Then on another 59 kilometres the roadbook tore. After that I was just trying to follow some dust and keep up with the guys. I unfortunately picked up a bit of a penalty. Once the roadbook has gone you’re pretty much driving blind. It’s not the greatest start. At the moment it looks good on paper, but we have a penalty coming. At least we know we still have another 11 days of riding to come. The bike is feeling great.”

Toby Price was subsequently handed a two minute penalty. He maintains his lead of the race

Matthias Walkner: “I’m enjoying my time in Saudi Arabia. The Start Podium was nice and the people are friendly. Now we’ve got our first taste of the terrain we’ll be racing on and for me it was pretty cool. It was a tough stage, but after about 80 kilometres I settled into a good rhythm.”

Sam Sunderland: “There were a lot more stones than I was expecting. Navigation was difficult and so was visibility. When we’re going at high speed these things become even more difficult. I’m looking forward to the days that are still to come.”

Luciano Benavides: “It was my first time opening a Dakar stage and I think I did well. It was also the first ever Dakar stage here in Saudi, so it was a pretty crazy day. I’ve lost a few minutes, but nothing too bad considering I opened the road.”

Laia Sanz: “I’m a little surprised that the desert here is so nice, such an open desert. The navigation was not too bad, but you need to stay focused all the time. If you relax then you can make some mistakes. I took it quite easy today because we have a long race ahead of us. I’m happy to start like this.”

CS Santosh: “This was no gentle warm-up stage, we were straight into it today. It looks like it’s going to be a really tough rally, but also a really enjoyable one. I had two little crashes on the rocks and hurt my hand a little bit. I just want to keep things together until the end.”

Stéphane Peterhansel: “We got through today’s stage with no big mistakes or punctures. We had dunes, rocky sections and fast valleys today, a good mix of terrain.”

Carlos Sainz: “A mistake with navigation meant we had to go back for one waypoint. We also picked up a puncture on the stage. All in all it was not too bad. I was expecting to have lost 15 minutes, but it looks like we’re less than four minutes behind the leader.”

Nasser Al-Attiyah: “It’s a good feeling to be at the end of the first ever Dakar stage in the Middle East, but it was a hard day. We had three punctures to stop and fix. We had to stop every two or three kilometres to fix a rear wheel, very strange. We opened the road today and that was not easy, some tricky sections.”

Giniel De Villiers: “We had four punctures, luckily one was a slow puncture! We had to inflate the tyre as we went and did that for about 120 kilometres. This forced us to go slowly and lose time. It seemed like we didn’t have the luck today. Let’s see how it goes on the other 11 days.”

Chaleco Lopez: “It was long stage and really tough from start to finish. There were so many riders out there. My co-driver Pablo (Latrach Vinagre) did a great job, he had to work a lot. We lost two tyres because of punctures.”

Mitch Guthrie Jr.: “This was my very first Dakar stage and it feels great to just get over the line. Our aim was to just make sure we got through it in one piece so we could keep going and that’s what we did. We’ll take a look over the car tonight and head out again tomorrow.”

Blade Hildebrand: “That was a tough stage and I’m glad we got through it. It’s best to get the bugs out of the car early on so we can have some nice runs later on. I’ve given myself about 35 minutes to make up. From here on out I’ll be aiming to keep my head down and make my way through the pack.”

Cyril Despres: “We had trouble with the car. Starting and stopping, starting and stopping. We were doing well for the first 250 kilometres, but then had some problems with things overheating. The sand was too much for the ventilator. We stopped to clean out all of the sand so we could bring down the temperature. However, the problem kept coming back during the last 60 kilometres of the stage.”

Mike Horn: “Today was my first experience of being a co-pilot at a rally. I had to learn the roadbook very quickly, but once you start you get used to it. With Cyril (Despres) knowing the type of terrain we were on quite well helped us a lot. We were able to keep up a good speed and move away from the others. Then we ran into a little bit of trouble. I have to say the terrain was beautiful; mountains, rocky areas, riverbeds and the most amazing passage through the dunes. You could really see the variation of the terrain that makes this rally so special.”

Dmitry Sotnikov: “We’ve started this Dakar with a real rally stage. There were dunes, there were a lot of stones. It was a very long day, so difficult with all the stones. We needed to stop to change a wheel. I’m really not sure how we’re doing in the race, we just wanted to make it to the end of this difficult stage.”

Eduard Nikolaev: “We had a problem with our cooling system. The electrics connecting to the ventilator were shutting down and causing the engine to overheat. We needed to slow down to save our engine, so we reduced our tempo. This has cost us some time, but we’re only around 10 minutes from the front. We’ll be back tomorrow.”

Ignacio Casale: “The terrain reminded me a lot of Morocco when I was there at the end of September. I was able to get into a strong rhythm and avoid mistakes along the way. Navigation was tough today and I can see that being a feature of this race.”