Frana Leads the Way on Sunday

The Marengo track was approximately .7 mile long and had a variety of corners and jumps including one fast straightaway. The weekend of racing consisted of two twelve lap races and one fifteen lap race each day for all the classes. The Saturday rounds of racing saw crew chief Ryan Brumund pilot the RCV Performance AWD single seater, while Sunday would see John Frana behind the wheel.

Round One had Brumund on the front row of the two wide rolling start. The #907 AWD Buggy quickly grabbed the lead. About midway through the event, race officials allowed a pass under caution that moved Brumund back to second place. The rest of the round Brumund did all he could to retake the lead, but had to settle for second place.

Saturday’s second round of racing had the starting lineup inverted, putting Brumund in the back row of the field. The tight track put passing your fellow competitor at a premium, and after the twelve laps were complete, the #907 AWD single seater crossed the finish line in fifth place out of nine racers.

The final race of day saw Brumund start from the front row again. The first half of the fifteen lap race saw Brumund on the rear bumper of the leader only to have lap traffic impede his progress. At the checkered flag, Mike Geiser took the win as well as the top stop on the podium for the day as Ryan Brumund’s second place finish secured his runner-up position on the podium as well.

“The race car ran flawlessly today,” noted Ryan Brumund. “We didn’t have any issues all day. It was tough to pass today, but I gave it my all trying to get around Geiser, but second overall is a great result.”

The next morning race director David Bruner decided to have the races run in the opposite direction. Then to make things interesting, the rolling start was replaced with a land rush start. As luck would have it, John Frana drew the pole position for the first race of the day before the announcement, but this meant little as the land rush start gives no advantage starting from the pole position.

Regardless, the first Class 10 race saw Frana grab the lead right from the start. About midway through the run, the engine began to make loud explosive noises at full throttle. At this point the #907 AWD single seater had a commanding lead, so Frana backed off the throttle and found that the noises went away. Even while running no more than three-quarter throttle, the team crossed the finish in first place.

With minimal down time between races the Frana Vehicles team went to work looking to correct the engine problem. There was just enough time to check the engine compression and spark plugs before it was time for round two.

Once again Frana quickly grabbed the holeshot as he headed into the first turn. Then before the first lap was complete, the hood on the AWD single seater flew up minimizing Frana’s vision. This really didn’t slow the Northern Illinois driver much until race officials waved the black flag demanding he pull off to correct the issue.

Once crew chief Ryan Brumund performed the quick fix in the hot pits, Frana went back to racing. The #907 AWD Buggy quickly caught back up to the other racers and with only a few laps to the finish Frana regained the lead. The drama was far from over as the front differential starting coming loose, causing one of the front drive axles to pull apart. Somehow the driveline held together long enough to capture the victory.

Quickly the team went to work tightening the front differential mounts and replacing the beat up drive axle.

The final Class 10 race of the weekend was very similar to the previous round. Frana jumps into the lead and once again the differential mounts work loose and the single seater loses a front drive axle. Even with the loss of the front drive line, Frana continues to lead the field. About halfway to the checkered flag, the RCV Performance single seater clips an implement tire course marker, sending the racer spinning into the air. After the dust settled, Frana continued on still in the lead without power steering.

The final two laps saws John Frana cruise to his third victory of the day. The clean sweep of the competition gave him the top spot on the podium. This pushed the team into first overall in class 10 for the weekend with a nice paycheck from the event.

“We were really dialed in today,” noted John Frana. “Ryan’s time behind the wheel yesterday really gave some great input for today’s racing. Even though we had an issue with the front differential mountings, the changes to the chassis in that area since the last time we were here kept us running to the checkered flag. We will address the issue thoroughly before we head to the race at the Badlands next month. Thanks again to Lucas Oil for supporting this great event.”

The next two races are the final points races in both series:

TREC at the Badlands Off Road Park, October 6 in Attica, Indiana. 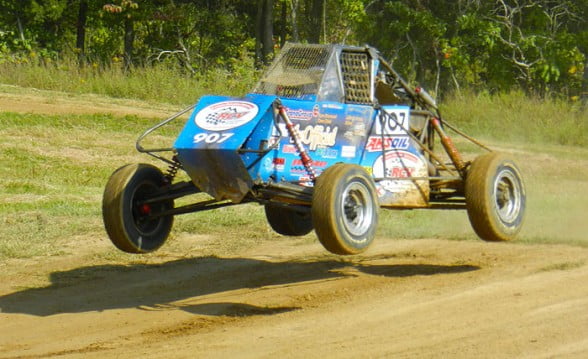