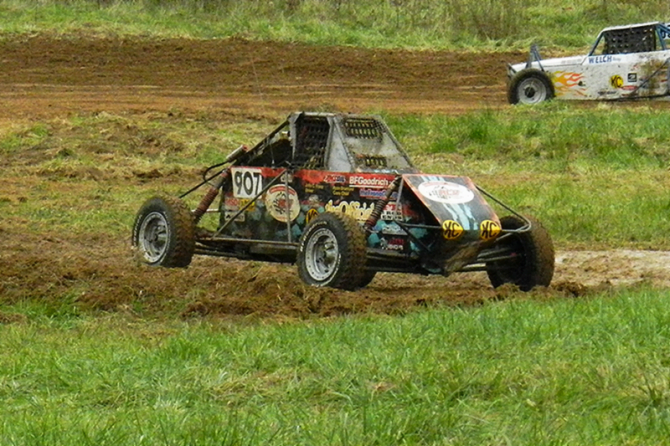 The final stop of the Lucas Oil MAORA Series was held at the Stone City Raceway in Bedford, Indiana. The event consisted of three heats of racing on a one mile long track on Saturday for the short-course races and a final three hour race on the three-mile long enduro course on Sunday.

John Frana and crew chief Ryan Brumund once again teamed up for the final race weekend of the season. Saturday afternoon had Ryan Brumund behind the wheel for the short-course program.

The first Class 10 heat race saw the RCV Performance racer running in third place out of ten cars when flames began to appear out the back of the race car. Brumund stopped a couple of times in the hopes of solving the issue, but by the time Frana and Brumund determined the oil was dripping onto the exhaust due to a loose dipstick, the heat was almost over. The #907 AWD Super Buggy was awarded the final position in the race order.

A quick fix kept the dip stick in place as the team looked for a better result for the second heat. Heat #2 was fairly uneventful for the #907 as Brumund finished the fifteen minute race in fourth place.

The final heat race of the day saw the lap times of Brumund really improve as he took the checkered flag in second place. Overall for the day the Frana Vehicles group finished fourth in Class 10. The fourth place finish was enough for the team of John Frana and Ryan Brumund to win the Lucas Oil MAORA Class 10 Short-Course Championship.

Overnight everyone in attendance got together for the traditional Fall Classic Pot Luck Dinner. This is always one of the highlights of this annual event as racers, friends, family, and fans hang out and talk about the past season.

The next afternoon the three-hour enduro saw John Frana ready to go behind the controls of the #907 RCV Performance/”the Official” Brand Name Prescription Card/Sway-A-Way/Frana Vehicles Honda-powered AWD Super Buggy. The three mile long course ran through some open fields, a wooded area, as well as the short-course track. A couple sections of the course were quite muddy and Frana hoped that would give his AWD Super Buggy an advantage. 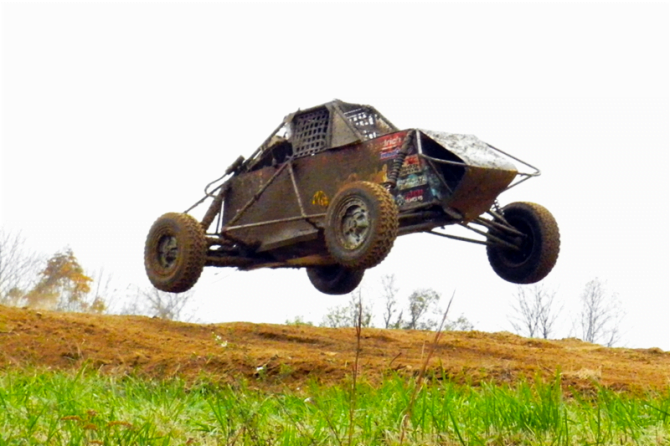 Unfortunately that advantage disappeared early into the race. About 45 minutes into the enduro Frana stalled the Super Buggy while heading into a very tight turn. Eventually the engine refired, but would only idle. This would result in a tow back to the pits.

Quickly Frana and Brumund checked a few things and somehow the engine came to life. Back on the track the AWD Super Buggy stalled again, and eventually Frana limped his way back once again to the pits. The team contacted Hondata during the race and changes were made to the engine’s electronics, but the stalling problem was still not solved.

Finally the team found the throttle linkage at the manifold was not working properly. The issue was fixed and Frana hit the track at full force. At the two hour mark, Frana came in to refuel and get Brumund buckled in to finish out the race.

The final hour of the race was uneventful as Brumund ran a very solid race as both race car and driver seemed to be getting stronger as the time wound down. At the finish, Ryan Brumund took the checkered flag in third place.

“Running the MAORA series is always a great time,” noted John Frana. “We really don’t come here looking to win a championship, it’s more about learning more about our race car and having a great time with friends. It’s pretty cool though that we won the short-course championship. Ryan got some good seat time and I really enjoy watching someone else drive the buggy. This year MAORA ran Stone City a few times and it has potential to become a really great facility. I can’t wait to come back again.”

John Frana has a little more than a month to cleanup his AWD Super Buggy and get it prepared for the Hondata booth at the PRI Show, December 11-13, in Indianapolis, Indiana.

With the season complete the Frana AWD Super Buggy is for sale, complete with all spare components.