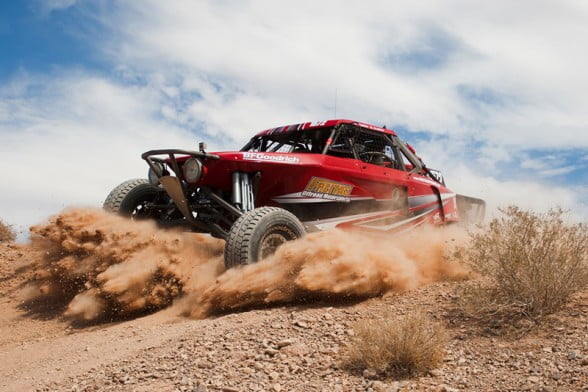 In only his second season racing in Best In The Desert’s unlimited ranks, Garrick Freitas has made his presence known by winning the TSCO Vegas to Reno race.  Winning in desert racing’s premier Class 1500 and coming in 2nd overall out of 298 vehicles in the longest off-road race in America was anything but easy though.  Freitas was still harboring demons from last year’s Vegas to Reno event.  In 2010 Garrick was running at the front of the pack when he cart wheeled his Jimco Champion less than 100 miles from the finish line.

Knowing that in order to finish first, first you must finish, Garrick took a more conservative approach to this year’s race.  This philosophy netted him a starting position of 26th from Friday’s qualifying, well back from his 9th place qualifying position at last year’s race.  Even that did not cause him to deviate from his game plan though, and the Tulare, California resident knew that he had to remain patient to overcome not only the 38 other Class 1500 competitors vying for the win, but also the 549 miles of brutal Nevada desert.

When the green flag dropped, Garrick quickly settled in to a fast and sustainable pace in his Jimco Champion with his father Danny navigating.  “Everything just fell into place today,” Garrick noted at the finish line.  “We were 2nd in points coming into Vegas to Reno last year and the wreck basically ended our season.  I was not about to make the same mistakes this year; my goal was to finish the race without any flat tires.”  This strategy, combined with skillful and efficient pitting from his family and friends, resulted in Freitas never getting passed while in the pits.  Instead, Garrick passed many other teams dealing with mechanical issues to move forward in the field.  Approximately half way from Vegas to Reno, at Race Mile 219, Danny Freitas gave up the passenger seat to Garrick’s cousin Trevor, who navigated Garrick to victory.   “We have been very consistent and had strong finishes but it sure feels good to win, especially after what happened last year at this same race,” Garrick humbly confessed following the race.
After 10 hours of fierce competition, Freitas finished just five minutes behind the overall winner and ten minutes ahead of current Class 1500 leader Steve Appleton.  The class victory catapulted Freitas and his team from 4th in season points up to 2nd place and puts them right in the hunt for the $9000 Camburg “Best In The Desert” award for the fastest average speed over every mile of every race for the season.  Freitas and his team now return home to Tulare, California to prep their Jimco Champion for the BITD Bluewater Desert Challenge on October 14-16 in Parker, Arizona.