The 42nd DAKAR rally marathon has finished! The event, held in Saudi Arabia for the first time, was completed by the 12th special stage from Haradh to Qiddiya with a declared length of 374 kilometers. However, the distance was again reduced, and the participants finished the fight earlier than they planned –the special stage was cut to 167 kilometers due to construction work at an oil field located near the route.

Leading Andrey Karginov won the final DAKAR special stage in the Truck standings. Aleksey VISHNEVSKY, the MAZ-SPORTauto team driver, supported by Gazpromneft –Lubricants, rushed to the finish line right after him – this is the best result in his career at one of the most difficult cross-country rallies on the planet.

On the final day, the race participants started in the city of oil workers – Haradh, and finished at the location of the newly built entertainment city-park Qiddiya that was founded in July 2017, 45 kilometers from Riyadh, the capital of Saudi Arabia.

The last day track was a combination of different road conditions – about half of the route was laid through sands and dunes, a third – on gravel and stones, and the rest the field passed on asphalt. And at the end of the DAKAR competitive part the participants, who reached the finish line, tackled the Qiddiya Grand Prix – a short support race, the results of which were not included in the DAKAR general classification.

But the main event of the final day was the Ceremonial finish that began at 12:00 local time. And tonight there will be an honoring ceremony for all the DAKAR categories winners.

Andrey Karginov brought the score of victories at current DAKAR special stages to seven. At the final special stage, the KAMAZ-master team driver was two minutes ahead of the closest rival, and this opponent was… Alexey VISHNEVSKY, performing in a MAZ truck with the G-Energy logo on board!

The Belarusian crew showed their the best result for the entire DAKAR. Guys managed to leave Eduard Nikolaev, Martin Macik and Anton Shibalov behind.

Alexander VASILEVSKY and Sergey VYAZOVICH, the MAZ-SPORTauto team drivers, chose not to take risks and guaranteed to finish the race without problems, waging a tactical fight to achieve the main result.

According to the DAKAR results, Andrey Karginov won the race, 42 and a half minutes ahead of his teammate Anton Shibalov.

Sergey VYAZOVICH finished at DAKAR that became the debut for the bonneted MAZ truck in the third place in the general classification. The Belarusian driver became the only one who managed to offer battle to the “Blue Armada” – VYAZOVICH was ahead of Dmitry Sotnikov, who became fourth, by 50 minutes.

According to the race results, Alexey VISHNEVSKY took the eighth place – he lacked only 8 minutes to be classified seventh, Ales Loprais finished in this position. Alexander VASILEVSKY, who insured his teammates, acting as a “quick technical vehicle”, completed the race in the 12th place.

Thus, the two stated goals were achieved: the bonneted truck of the Minsk Automobile Plant finished in TOP-3, showing that it can impose a fight on its rivals on the track; and the cabover truck entered the top ten. 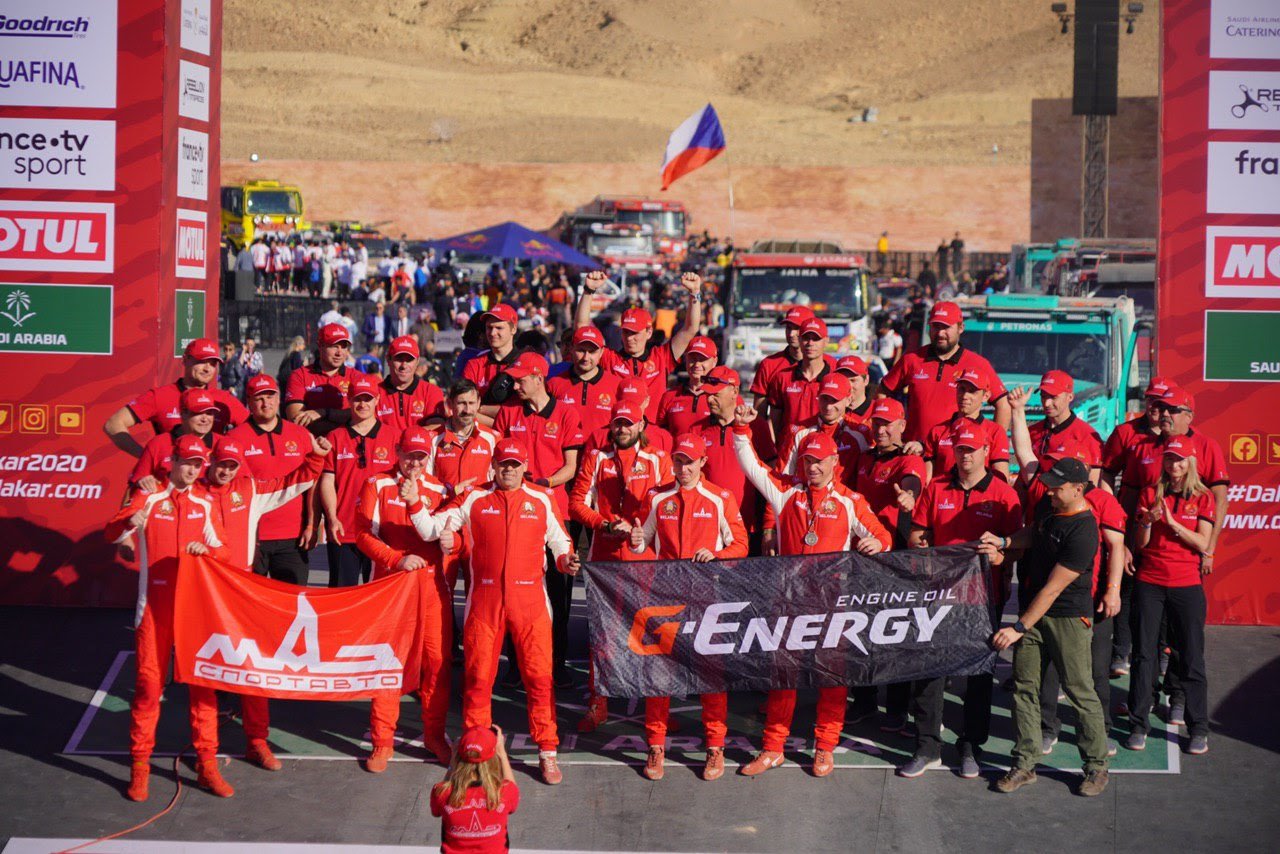 MOBILE LABORATORY:The past DAKAR rally marathon has become one of the most difficult for equipment to operate without exaggeration. The total length of the race route was almost 8 thousand kilometers, 5 thousand of them were competitive. About 80% of the distance was made up of the difficult operating conditions for the equipment –sands, dunes, viscous soil – where the maximum loads on the sports cars units are applied. G-Energy oils and lubricants have once again proven that they can undergo such tests, ensuring reliable units operation in difficult conditions.
According to the the MAZ-SPORTauto team regulations, engine oils were changed before the start and in the middle of the race distance. The first half of the DAKAR products worked out normally, the oils physicochemical properties showed their stability. The second half of the race also showed that the products are able to provide work in extremely difficult conditions. A number of points were identified on the technical condition of the units, recommendations were given to the technical support service, and the procedure for changing gear oil in onboard drives was adjusted to increase the interval.
The analysis confirmed that the oil used can provide a much longer replacement interval in this particular unit of the truck than it was previously provided for in the technical regulations. 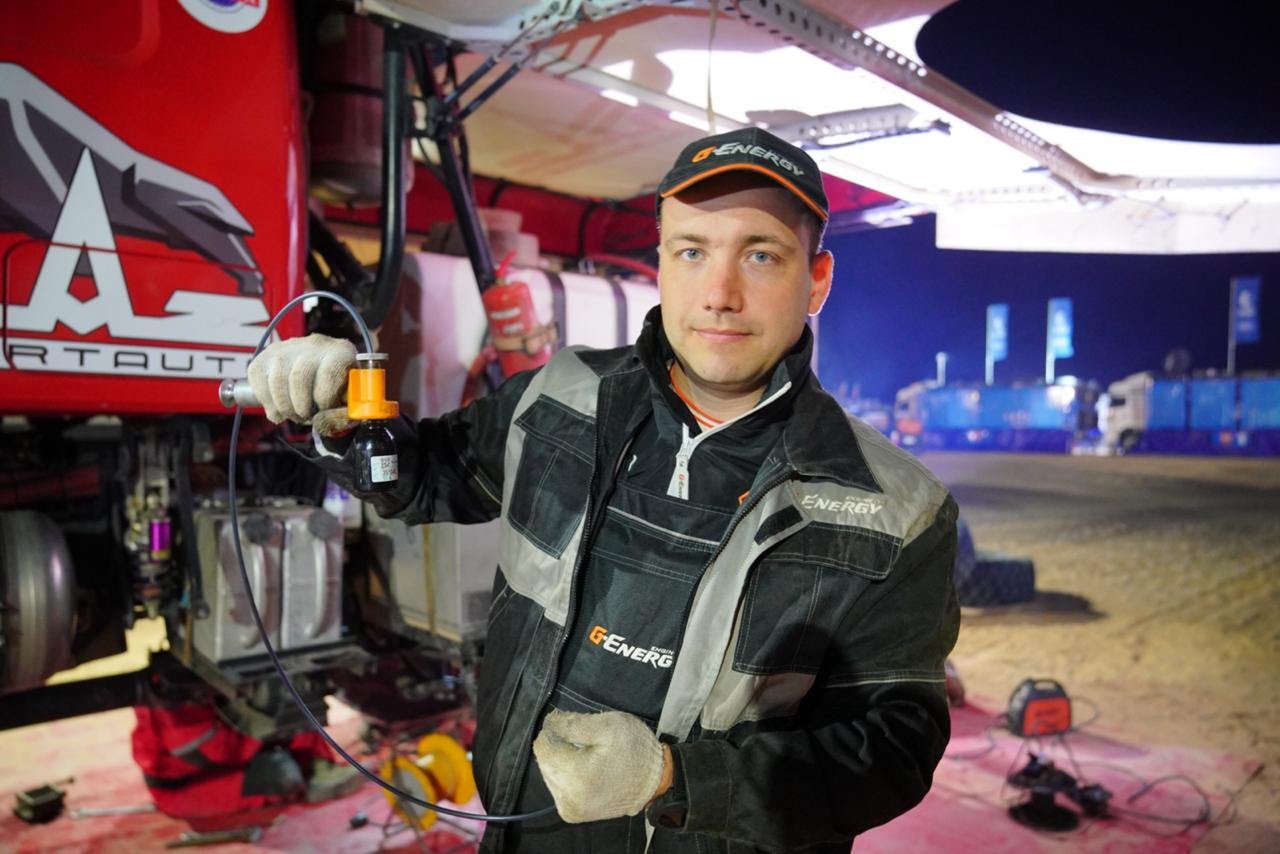