The 6th annual NORRA Mexican 1000 rolled into Ensenada this past weekend, racers from far and wide loaded up their classics machines and “Evolution” series rigs and headed south of the border for the ultimate test of skill and resolve.  The NORRA team has sought to “return off-road motor sports racing to its roots” and judging by the excitement level of the racers and fans alike, they have absolutely succeeded. 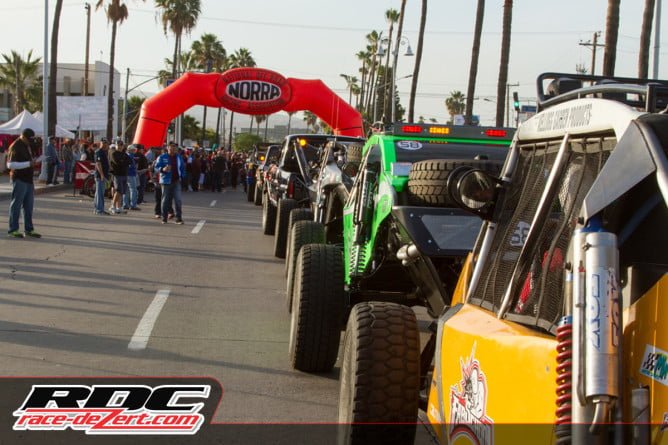 First organized in 1966, the National Off-Road Racing Association would go on to host the inaugural Mexican 1000 Rally in 1967, the sport would continue to evolve and bring with it a generation of future racers.  This next generation has revived the spirit of those who came before them, and over the past 5 years has grown to proportions only dreamed of by their forefathers.  Leading the charge is Mike Pearlman, son of Ed Pearlman, and his right hand man _(name slipping my mind)_ (Elesandro?) Francisco.  Mike has been around the sport of “Off-roading” before it had even earned the name, so keeping racing alive in Baja is his top priority.

The 6th Annual event is being run in memory of James Garner, a legendary driver whose passion for off road driving inspired generations to follow and helped shine the spotlight on the then emerging sport when he climbed behind the wheel.  As the drivers gathered for the pre-race meeting, Gigi Garner, the Grand Marshal for the race, paid tribute to her father saying “I don’t want anyone to think that he was a movie star that raced.  He was a driver that made movies.”  As she concluded her address, drivers filled the amphitheater with a thunderous applause and wild cheers. 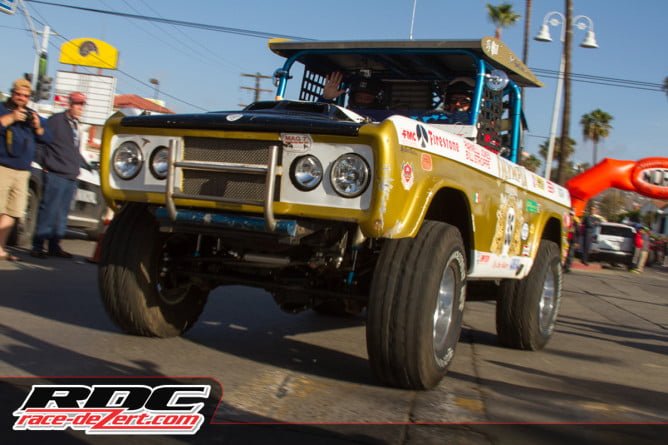 Day 1 was a 433.50 mile run from Ensenada to Bahia de Los Angeles.  Fans lined the entrance to the course as drivers set their course for the shores of the Pacific coast, departing the highway at Santo Tomas, making their way south of Colonet, and down through San Quintin for the first 144 mile Special. Once back on paved roads, drivers traversed the crowded streets of Catavina and were greeted warmly by the local children who eagerly awaited their arrival.  The 112 mile run to El Crucero would begin to narrow the field, and by the time they reached Bahia de Los Angeles only 81 vehicles would cross the line.  Fan favorite Robby Gordon was the first to take the checkers on day one, crossing the line 5 hours, 9 minutes, and 48 seconds after the green flag dropped. Jon Walker (#189), Bob Gordon (#85), Greg DiStefano (#56) and Mark Post (#333) rounded out the top five overall finishers on the day.

Once the race day was through, drivers gathered poolside for a gourmet meal prepared by Chef Roberto Alocer at the Cantina San Borja.  Stories of the day that was filled the air, with drivers reminiscing about the bumps and bruises they had earned on their way to town.  Eric Bothwell, co-driver for Rory Ward (#252), said “the car ran great, our front tires took a beating, but other than that it was a great day”.  Roger Lovell, talking with his team mates, said “the truck ran great, I’ve got a little problem with the gas pedal…it’s hard to get off the throttle.” 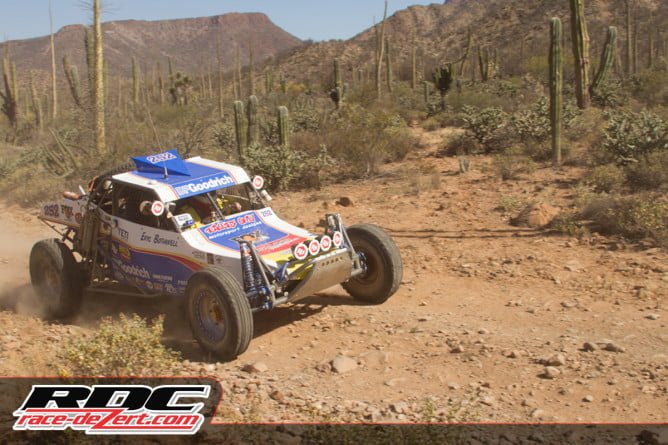 As dawn broke on Day 2, the sun cast its morning light on the tents and cars that lined the shores, the race teams broke camp and once again prepared themselves for another exhausting run.  By the midpoint of the first special, Kent Thygerson (#569) struggled to get his car restarted after the engine flooded but after some patience and advice from his crew chief got back under way and still managed to crossed the line in 50th position overall, crossing the line nearly seven and a half hours after crossing the start line.  Prior to starting the Second Special, JT Taylor and his #13 Powertank car were stopped to repair the shock mounts that had sheared off earlier in the day, using a piece of the ramp from their car hauler.  His crew worked feverishly as the local children watched, each one as anxious to see the car get back on course as JT himself who said earlier in the day “I’m running against the V-8’s and keeping up, I love this little car!”

At the conclusion of the Second Special the teams lined the roadside pit area to make repairs and fuel up for the last transit before Loreto. Rick Johnson and his ’71 Nova “Snortin Nortin” were up to their elbows in a ball joint replacement.  Rick rescued his Nova from a swamp in Louisiana where it had done a brief stint as a mud bog car, in a knuckle busting 90 day sprint to get it ready, he breathed life into the legendary ride of Mick Netwon once again. When he also restored the ’57 Chevy “Rockin Rooster” (#609), he also revived a historic rivalry between vintage iron.  Piloted by Rick’s friend Jim “Rooseter” Riley, these two battled their way down the course and have continued to draw huge crowds as they roll through town. A nine man driver squad from Blazer Adventure, who picked up their trucks “sight unseen” from a military base in Texas, swapped seats and stories throughout the day as they gathered around their pair of ’84 M1009 Chevrolet Blazers.  They joked about being passed by the Broncos earlier in the day saying “it’s funny to watch them fly by, then here we come with our old 6.2L diesels and pass them when they break down.” 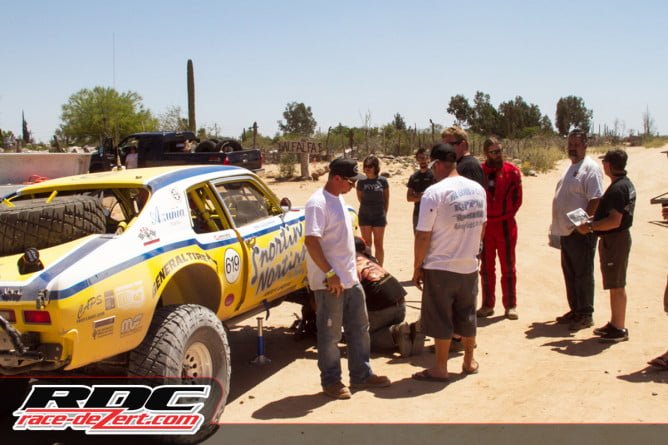 As the drivers crossed the Day 2 finish line in front of the La Mission Hotel in Loreto, they gathered poolside once again to swap stories about what the course had thrown at them over the 426.20 miles.  From gear boxes that had dropped a gear, to engines that burnt through more oil than the drivers thought they held, but the recurring theme of “we’ll see what happens tomorrow” rang out loud and clear.  The next stage is a short run from Loreto to La Paz, where driver and machine alike will once again converge on the coast, overlooking the Sea of Cortez for another night of poolside fellowship and parking lot fixes to get them ready for the final day of racing into San Jose Del Cabo.