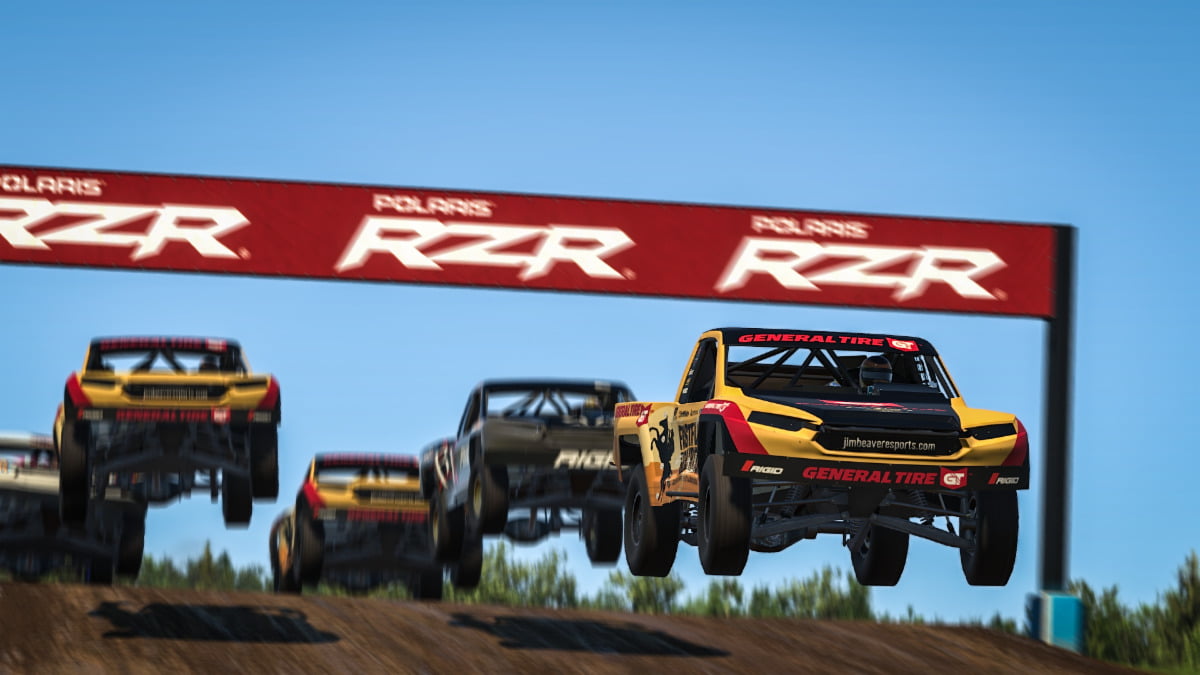 Jim Beaver eSports is proud to announce the second annual General Tire eShort Course World Cup presented by Fistful of Bourbon, streaming live this Thursday, January 21 at 9PM ET/6PM PT and airing on the CBS Sports Network on Sunday, February 14 at 1PM ET/10AM PT. Utilizing the world-class iRacing simulation, the eShort Course World Cup will pit nearly 30 world-class racers from both the real and virtual worlds against one another in a pair of events, first featuring Pro 2 short course trucks at Wild West Motorsports Park and Pro 4 trucks at Crandon International Raceway.
“After the success of last year’s event pulling in over 200,000 viewers online, we really wanted to go all out for year two and do something that has never been done before, and that’s television for virtual off-road,” explained Beaver. “With the help of General Tire, Fistful of Bourbon, and iRacing, we are going to be putting on one of the biggest short course races of the year, both virtual and in the real world, and I’m really excited to have CBS Sports as a partner.”
The General Tire eShort Course World Cup presented by Fistful of Bourbon is one of just a handful of events to put top sim racers and real-world superstars on track together on a major stage. Featuring equal setups on all vehicles and a number of inversions throughout the night, all racers truly have an equal shot to win. Last year’s inaugural event saw professional sim racer Cam Pedersen sweep every race on the way to being declared the inaugural eShort Course World Cup champion.
The list of invited celebrity participants spans all forms of motorsports from NASCAR to drag racing, and includes a talented list of off-road superstars. Drivers expected to compete include the following:
This year’s eShort Course World Cup will elevate off-road sim racing to the next level with its television debut on the CBS Sports Network. Fans will be able to watch the action through a robust show produced by iRacing’s own broadcast crew, which was responsible for the six highest-viewed sim racing broadcasts in US television history in the spring of 2020. The eShort Course broadcast crew of Evan Posocco on play-by-play, Beaver on color commentary, and Tiffany Stone in the pits will return.
The General Tire eShort Course World Cup presented by Fistful of Bourbon will stream live on Jim Beaver’s Facebook page starting at 9PM ET/6PM PT on Thursday, January 21. For more information on Jim Beaver eSports, follow the team on Facebook, Twitter, and Instagram or visit www.jimbeaveresports.com. For more information on iRacing and for special offers, visit www.iracing.com.
About Jim Beaver
Jim Beaver is a professional off-road racer, nationally syndicated radio host, and TV personality. A 3rd generation race car driver who is currently competing in off-road’s premier Trick Truck division as well as being a factory Polaris RZR driver in the Polaris RZR Star Car. His radio show, the Down & Dirty Radio Show Powered by Polaris RZR, is the #1 motorsports radio show in the United States on iTunes, and is syndicated to 200 AM/FM networks domestically and available internationally on the American Forces Network. He has been instrumental in pushing off-road and action motorsports to mainstream America through various television, radio, print, and online appearances while actively competing in and covering the events. He can be followed online at @JimBeaver15 on Facebook, Instagram, and Twitter. More information on the Down & Dirty Radio Show can be found at www.DownAndDirtyShow.com, or by following @DownAndDirtyShow on Instagram.