Stage 2 Pisco – Pisco  242 km special 85 km liaison
The second stage of the 35th edition of the Dakar was a loop that started and finished in Pisco. Competitors experienced a 100% sandy stage characterized by fast tracks at the beginning and then, from km 145, big dunes and dunes “cassées” that  made the challenge even more demanding.
A 242 km special stage in deep sand was particularly demanding for the machines, especially for fuel consumption with one refuelling point at km 81 in the liaison, 4 km before the start of the special stage.
The day looked promising for the Team HRC riders and Helder Rodrigues, started 29th , used all his experience to attack in the dunes  picking up the 4th position at the CP1 (km 160). Helder continued to push aiming to finish in the first positions but unfortunately his machine ran out of fuel at 4 km to the finish line.  Thanks to the team work,  Javier Pizzolito gave his fuel to the team mate and both Helder and Javier arrived together at the end of the stage.
Spanish Joan Barreda won today’s stage in front of Juan Pedrero and team mate Matt Fish and is now leading the overall standing with an advantage of 5’35 on Ruben Faria and 6’36 on Juan Pedrero, third.
Helder Rodrigues SS2 15th +10’32, 15th in the Overall : “At the beginning there was a lot of dust but in the dunes I attacked recovering many positions. At one point in the stage I was third and I pushed till the end to assure me a good result but at 4 km to go, I ran out of fuel and had to wait for Pizzolito who gave me his fuel. I’m disappointed but the Dakar is still long”. 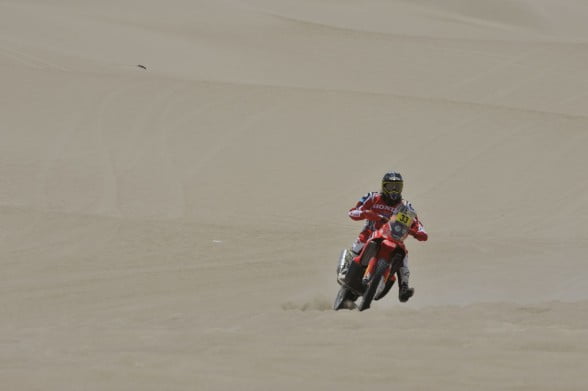