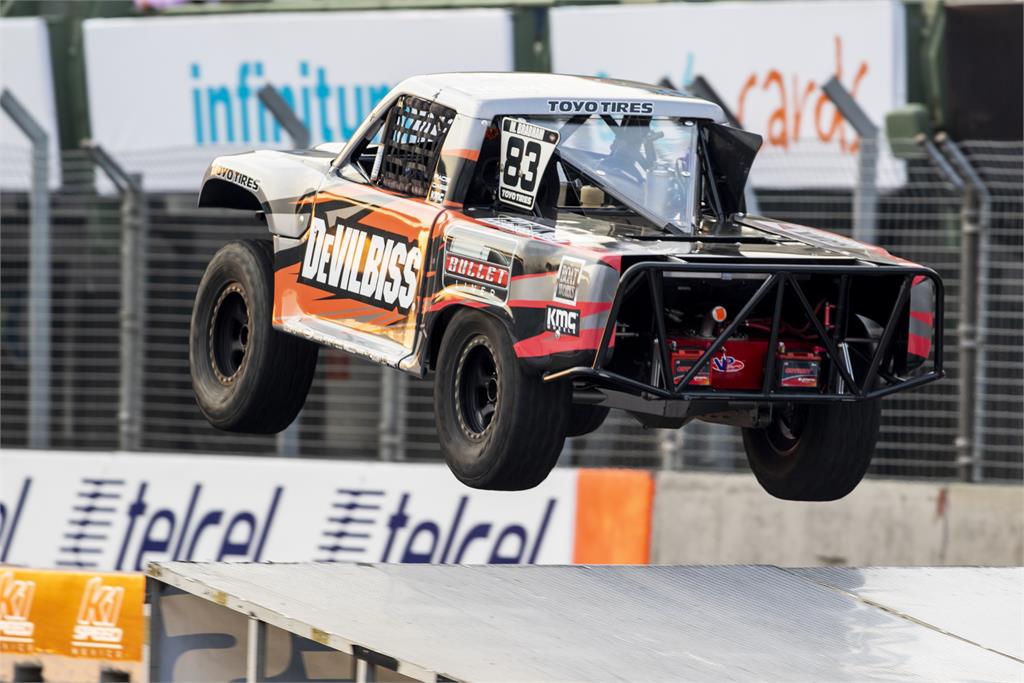 Race of Champions is an annual event featuring champion drivers from all over the world competing head to head on a unique technical track to test their skills in various unique race vehicles.

Operating in direct conjunction with the Race of Champions; 10 Stadium SUPER Truck drivers would have the opportunity to compete head to head for two knock out elimination races on the same exact Race of Champions track, but with the addition of two SST signature 36-inch tall aluminum ramps.

After the completion of an hour-long practice and qualifying session Friday evening, Orange, California driver; Robby Gordon would claim the number one seed for Saturday’s race as the quickest qualifier with his familiar bright orange SPEED Energy/ Toyo Tires/ KMC Wheels entry.

Round one on Saturday would feature five elimination races immediately cutting the field in half.

The number one seed of Robby Gordon would line up his Toyo Tires against the tenth seed of Baja 100 Off-Road Champion Apdaly Lopez of Tecate, Mexico for three laps with the fastest time of the two competitors advancing. Lopez would immediately hit a cone inquiring a five second penalty to his overall time easily allowing Gordon to advance to the second round.

Jeff Hoffman of Phoenix, Arizona in the LIVE/Think Loud entry would line up against United Fiber and Data driver Casey Mears of Scottsdale, Arizona in the third race. However, Mears would hit a cone applying a five second penalty to his overall time handing the victory over to Hoffman.

The fourth match up to hit the track would feature the SST Championship Points Leader of Matt Brabham from Gold Coast, Australia against Scottsdale, Arizona native Cole Potts. Brabham would race smart and consistent avoiding any cones to easily beat Potts to advance to the next round.

Gavin Harlien in the United Fiber & Data truck would match up again the VP Racing Lubricants and Oil driver of Davey Hamilton Jr. Harlien would lay down one of the fastest laps of the day beating Hamilton Jr. to move on.

Round two of head to head knock out racing would see Gordon claim victory over Hoffman, Brabham defeat Hildebrand, and Harlien easily working his way past Potts the Round 1 lucky loser. All three drivers would move on to round three.

The third round would see Gordon defeat Harlien to move on to the finals against Brabham whom would easily claim victory over the fastest loser Potts in the second semi-final.

Race of Champion Saturday Finals would see Brabham go head to head with Robby Gordon for the victory. In the closest race of the day Gordon would inch past Brabham by mere seconds to capture the win. 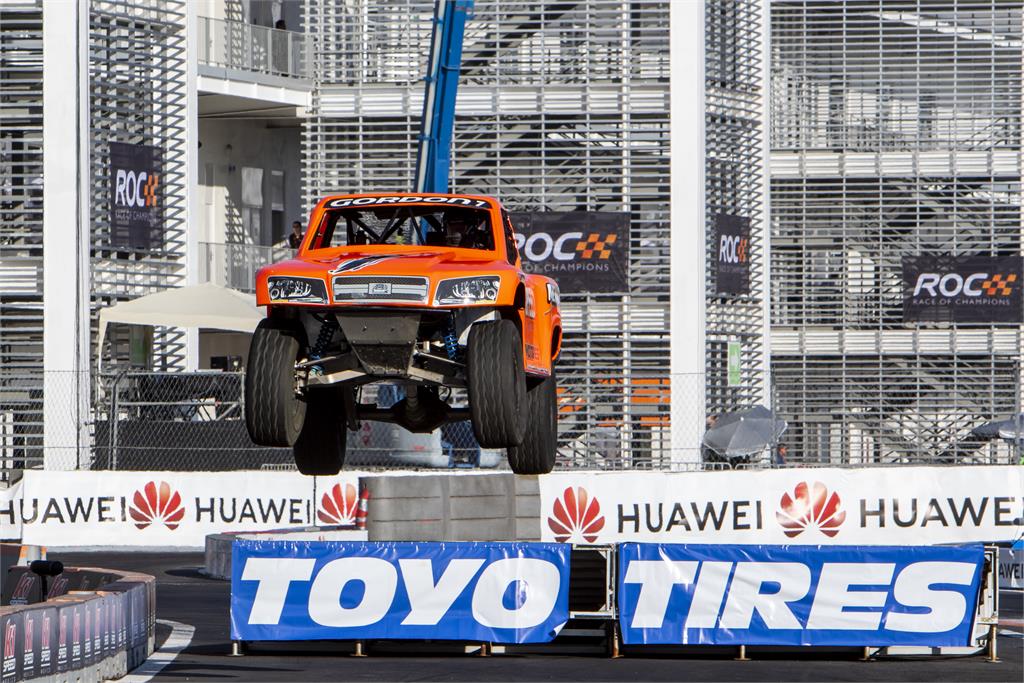 For the Sunday afternoon SST Race of Champions Final drivers were re-seeded based on their results from Saturday’s event.

Round one would feature five elimination races replicating the exact format that was done on Saturday.

The first race Sunday would feature the Devilbiss/BulletLiner driver of Matt Brabham lining up against Davey Hamilton Jr. of Indianapolis, Indiana for three laps. In a very close race Brabham was able to defeat Hamilton to move on to the second round.

In a rematch of Saturday’s Round 1 Jeff Hoffman would line up against United Fiber & Data driver Casey Mears. Mears looking for revenge on Hoffman would keep a consistent pace and win the event, but would be penalized for hitting a cone handing the win back over to Hoffman.

Also in a rematch of Saturday’s Round 1 Blade Hildebrand in the Empire Destructive Racing truck would face fellow Southern California Off-Road racer Jerett Brooks. Hildebrand would complete the fastest laps eliminating Brooks from competition for the second day in a row.

Saturday’s Race of Champions SST winner Robby Gordon would match up against Cole Potts with a battle of the SPEED Energy back entries. Gordon would advance to the next round with the fastest time.

The fifth and final race of Round 1 would feature Gavin Harlien of Mesa, Arizona in the United Fiber & Data truck go against Tecate, Mexico Baja Champion Apdaly Lopez. Harlien would easily capture the victory over Lopez to move on to the second round.

Round two of elimination racing would see Hoffman claim victory over Hildebrand, Brabham nipping Harlien by the closest of margins to advance, and Gordon easily working his way past Potts the Round 1 lucky loser.

Round three would feature a rematch of Saturday’s Final round seeing Brabham defeat Gordon to move on to the finals to compete against Hoffman whom claimed victory over the fastest loser Potts in the second semi-final.

As Brabahm and Hoffman would go head to head inside the Foto Sol for three laps looking to drive as cautious and smooth as possible. Hoffman would go on to win the final round in dominating fashion, but a :05 penalty was issued by USAC’s Jason Smith after completion for hitting a marker cone handing the SST Race of Champions Sunday victory to Brabham.

After placing second in Saturday’s event, and claiming victory in Sunday’s finale Brabham would be crowned the overall Race of Champions winner.

Saturday’s race winner Robby Gordon, after being knocked out in the Semi Finals in a rematch of Saturday’s Final would place in second overall with Cole Potts claiming the third overall position.

With claiming victory in the overall weekend, and knocking runner-up Gavin Harlien out in Round two was enough for Brabham to secure the 2018 Stadium SUPER Trucks World Championship title.

“The weekend was a great event and I could not be happier to cap off the title by winning the final event of the season.” Explained an enthusiastic Brabham.

After dominating the season, finishing every event on the podium. It was a tremendous reward for Brabham to end the season on top after loosing the 2017 Championship by a single point to fellow Australian Paul Morris. 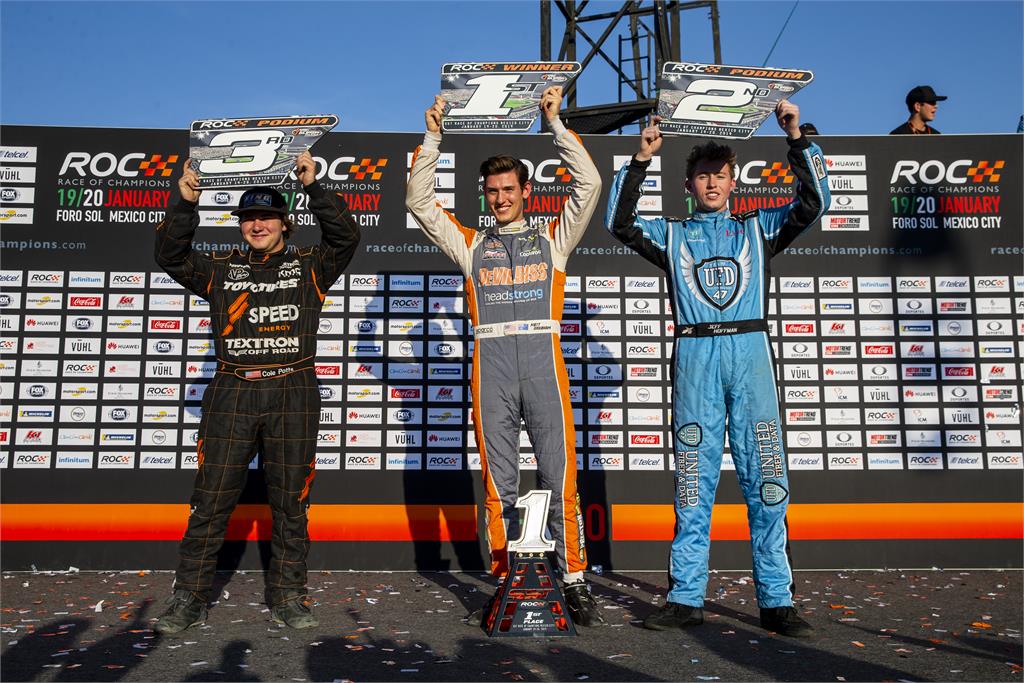 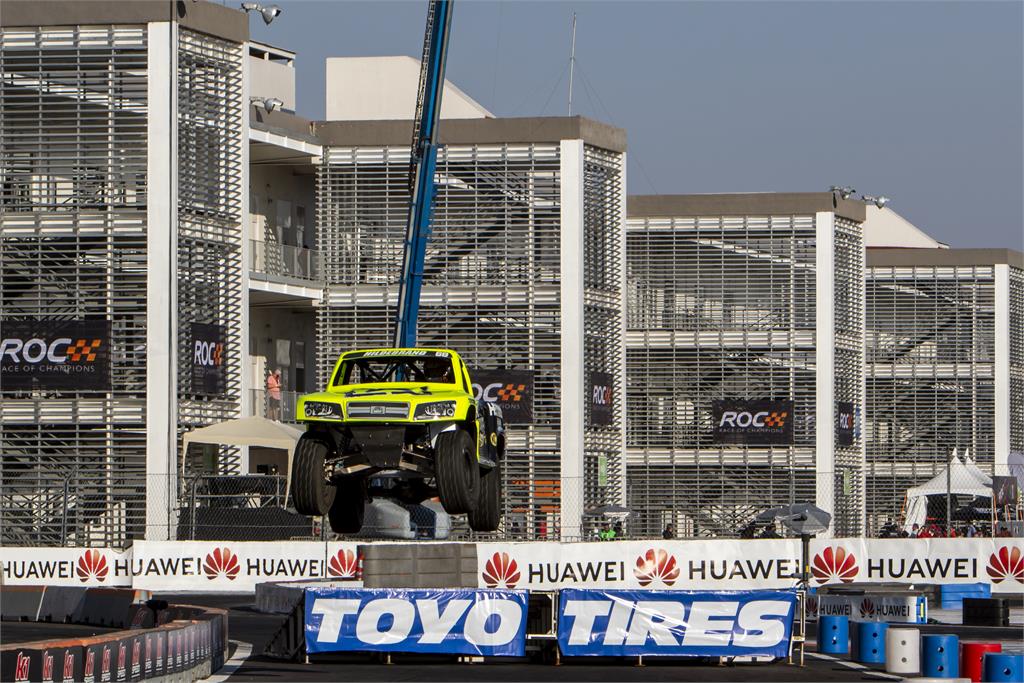