The HUMMERS of Robby Gordon and Nasser Al Attiyah continued their assault on the DAKAR Rally this morning, both cars jumping out to impressive starts with Nasser leading by several minutes over the field before succumbing to a problem with the motor’s cooling system. After repairs, Al-Attiyah had lost more than 24 minutes. Gordon and Campbell, who were physically in front of Nasser all day, continued on to an impressive 2nd place in today’s special stage. This is important for next week as today, the HUMMERS got their first taste of serious sand dunes.

In other notes: Andy Grider and Orlando Terranova, who got a 2nd yesterday have mysteriously withdrawn from the DAKAR rally. Early speculation pointed to a possible dispute between Terranova and his co-pilot, however Grider reportedly issued a statement through the team about having to tend to personal family matters at home. Because of some confusion in translating the statement into English, more questions were asked of the team and the manager is said to have fess’d up that Terranova and Grider began seriously arguing after stage 4 and that Grider basically told Terranova to ‘pound sand’, quite fitting prior to the huge dunes of stage 5.

Next week, the rally will head north through Chile and across the Atacama Desert.

ROBBY GORDON: “We’ve got a long way to go. I actually kind of paced it the whole time and we didn’t have any problems. Our car works good enough on those type of sections. I was surprised that we got beat by Holowczyc, he did a great job, but for us to beat Peterhansel by 3 minutes was good and that makes up a little bit of the distance. I think we beat De Villiers by about ten minutes, so I’m going to say, looking at what we see right now, we’re probably in third position and we’ve got a long way to go. I’m not even driving the car that hard.”

JOHNNY CAMPBELL: “Stage 5 went well for us. It started in sand and went into dunes right away. Nasser caught us quickly, and was driving like a mad man. We let him pass as his pace was really aggressive. Then we trailed him and caught and passed a few cars but we had a hard hit from front end impact and lost a fan motor. The engine temps were climbing so RG backed out of it to save the engine, we lost Nasser, but once we got on some fast roads the temps went down and we resumed race pace. RG picked it up in a cross grain section and we gained lots of time. Toward the end of stage Nasser was parked with problem. We did a quick check and they had to repair a water line. We took off and resumed a good pace to the finish. Super fun day. Good for the Speed Energy Hummer #303.”

Nasser explained his difficulty today: “The spare wheel was loose and it hit the engine water pipe, breaking it and after the temperature was very high, so we stopped to repair again and lost a lot of time. But what can I do? I was really having a good run, I was doing my maximum but I don’t know what’s wrong, you know. My plan today was to take at least ten minutes from everybody and that’s what was happening because I was really fast until CP2, I think. But after, we stopped there because we needed water and to fix and prepare the car. So, yes, I’m disappointed again!” 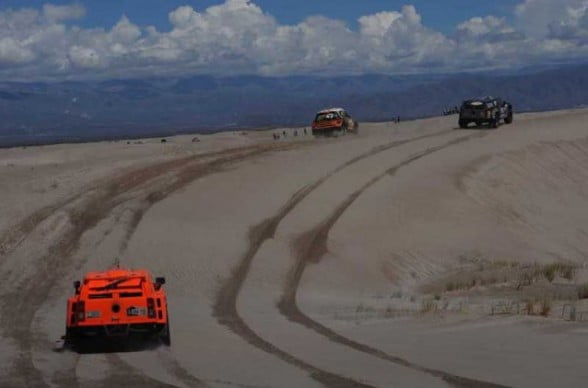 S
Scotty Breauxman
GO TEAM SPEED USA
GORDON &amp; CAMPBELL rock on . We are all watching from Baja !!!
When Nasser comes to race BAJA he will win everyones' hearts over on first day, the most likable person on earth and a really great human being. Can't wait for him to show up. I think that lifelong bonds are being made in that pit on this rally. With Johnny and Nasser together under the same tent, magic is sure to happen.