GORDON & CAMPBELL RESPOND TO PETERHANSEL AND ROMA BY GIVING THEM A SWIFT ASS-KICKING TODAY IN STAGE 12; GAINING 26 MINUTES ON THE GREEN MINI

If there’s one good lesson you can use in life and especially racing, it is that you never want to underestimate your opponent on unfamiliar terrain. It may seem cliché like some quote form “The Art of War” but at the end of stage12 of the DAKAR Rally, the MINI’s were all beaten so badly by both the course and their fiercest rival, it all points to the fact the MINI’s suffered a grand blunder.  And they all got screwed for it.

Rally leader Stephane Peterhansel was quoted yesterday about the HUMMER’s horrible stage 11, “As for Gordon, whatever happens now, he will just be carrying on to Lima for the enjoyment.”

That actually turned out to be true because, from the sound of things this afternoon in Nasca, Peru, Gordon thoroughly “enjoyed” smashing the MINI’s aspirations for another stage win. Despite the absolute spanking that Gordon and Campbell dished out to the field today, they are still an hour and 44 minutes out of the lead with only one more day of full stage remaining.

Clearly though, still, they have a respectable shot at an overall podium finish, if not better and American;s are rallying together behind Gordon and Campbell like we have not seen in recent memory.

Prior to today’s action, RDC had studied the maps and probable routes to determine that the most serious challenge of stage 12 would be the final 40 kilometers, which crossed over the Cerro Blanco, the tallest known sand dune on the planet. In this final section of special stage, all four MINI’s and the TOYOTA of Giniel De Villiers got stuck for at least some amount of time, wrecking all their hopes for stage victories.

“I showed the plug that everyone’s been talking about that gives me all super power and I just proved that Minis are for girls, because we beat them by twenty minutes. It was a great stage, with big dunes and the car’s fast. Last night I went through a whole thing and went on Youtube. You can go to Robby Gordon – Dakar – Air inflation; check it out, it’s posted and explains the whole system. It’s the same system that the French officials approved one year ago and now they’ve changed their minds. There, that’s the system plug, with no possible chance of air. We schooled these boys. I’m pissed. I’m pissed at Stephane and I’m pissed at Nani for challenging my character about being a cheater and today I kicked their asses. I’m going to prove something every day for the rest of the rally. We’re going to win every special from here home.”

RDC will remind readers that in the DAKAR, most vehicles are 4WD and the rules state that these cars cannot use auto-air-inflation/deflation systems. But, because 2WD cars are seen as being “disadvantaged, they are afforded the luxury of using on board air systems that allow the pilots to inflate and deflate tires on the fly, without stopping or getting out of the vehicles. Gordon has used this same system for each of his prior 4 DAKAR entries, without issue. Not only do the MINI’s have to stop to deflate and/or inflate, but these drivers today were forced to dig themselves out after getting stuck on the ascending side of the Cerro Blanco. Imagine multi-time DAKAR winner Stephane Peterhansel scrambling to free his MINI from a sand-trap. It happened today at least once.

It is Gordon’s HUMMER and it’s on board inflation system that are at the heart of the suspicious disqualification of 303 by the DAKAR organizers. It does not matter what nationality or race the organizers are comprised of in this case. It is clearly suspicious because the DQ came about only after Gordon and Campbell proved they could lead and win stages.

America has been grossly un-represented in the DAKAR rally and have never won the event, so with the growing popularity of new media technology, more American are catching onto DAKAR fever as we watch our new heroes fight an uphill battle, not only on the race course, but now also in the stewards’ tents and likely, in coming weeks, a court of law.

Our team at RDC will be working all night long to try and predict when and where tomorrow’s stage 13 will possibly take the competitors and what fans can expect form this analysis. The MINI’s made a big mistake today by underestimating the HUMMER and it’s crew’s experience in the sand. If they learned anything from that, they will be smarter in tomorrows stage. Until then, “Au revoir et à demain” 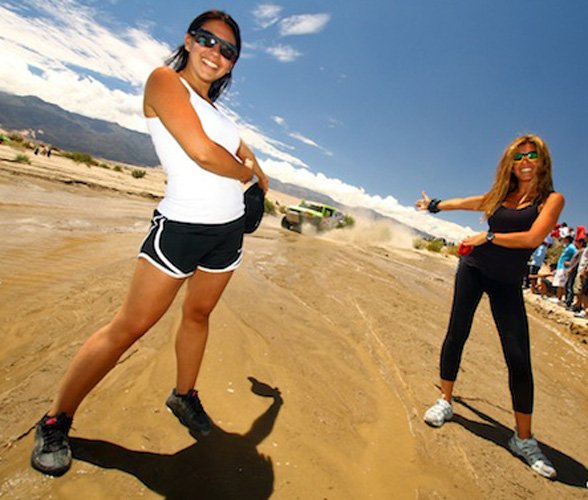 S
Scotty Breauxman
SCREW THOSE FRENCH WHINERS...THE HUMMER KICKED THERE MINI ASSES, &amp; NOW THEY CRY FOUL.....F - - K THEM..............LOSERS...........THEY GONNA CLAIM A "WIN" THIS WAY????? THE ONLY THING WORTHWHILE OUT OF FRANCE IS THEIR "FRENCH FRIES".....)
Gresat piece! I'm so glad that Robby's efforts in Dakar are finally getting the media attention it should.
and you know what! French Fries are not entirely French! They are Belgian!
Only you people call french fries "french fries"...
And may I remind you where your ancestor come from? France, amongst other European countries.

To talk about the race, because that's why we're here for, if the Hummer doesn't comply with the rules, the right actions have to be taken. Same thing with any other car. If the organizers have been lenient in the past and only woke up today, it can seem unfair - agreed. But the rules are the same for all the competitors, or at least, hopefuly...
"You People"???

Hey for sure the rules need to be followed and Peterhansel excluded for Rivergate. No appeal, evidence is clear.

Meanwhile RG is taking his due process and following protocol as "dictated" and giving ASO, NANI and PETER a piece of his mind. Off road was born here in North America. May I remind you where DAKAR's ancestors came from? It ain't from WRC.

Maybe we can discuss further over some crepes, eh?
my ancestors are from el centro and imperial..and the car is legal period.
Like any Racer they run it close to the rule book. I've raced with Gordon over the years, he doesn't cheat. I agree with others, the French need to suck it up and go race and leave their Mini Purses at home.
GO TEAM SPEED
Gordon is not going to spend millions of dollars to race dakar and then cheat....DUHHH!!!!Or should I say you boufants !!! pay attention frenchy- americans are way faster and our machines are far superior, the rules are the rules and we will build to the rule book ...another ass kicking from the red white and blue coming soon....ciao or as we say in the usa later dude...and kmaa
Curse the French. A bunch of wine-swilling surrender monkeys!
I am going to make a few historical comments here to establish a trend, so bear with me!The French dont stand a chance. Google "French Military Victories" Nothing comes up. French military weapons are always in mint condition... They have only been dropped once... Durring a surrender! Now that thats out of the way!

Gordon dosent need to cheat to win these stages. It is where the Hummer and its crew shine. Obviously there are big money teams involved with swaying an official. I could accuse you of anything and if you are inspected by a motivated (Bribed or otherwise) official utilizing very vauge verbage to describe the imaginary offense... Well, what do think is going to happen? Volia! A Vauge accusation of a vauge offense, to be discussed at a later date, maybe, sorta, after the race. In the mean time you have brashly flown the French flag of typical pissyness and cowardness. It is up the pole and waving in a foul smelling wind that blows straight from the factory backed Mini Team.
Did you mean "vague"?
Maybe you should have googled that first...