CORONA, Calif. (June 22, 2011) – Boy did Monster Energy’s Johnny Greaves (Toyota/Maxxis) step up and come charging back at the Traxxas TORC Series, presented by AMSOIL’s second round of action this summer after getting stuck in the mud at TORC’s RedBud MX (Buchanan, Mich.) opener.

This past weekend not only did Greaves win TORC contest at Crandon (Potawatomi Brush Run 2011), he did so by setting a record, beating fellow Monster Energy off-road racer and defending TORC Series PRO 4 champion Rick Huseman’s previous record by a full half second – 1:18.983 to 1:19.482.

Above the din of air compressor-run tools, tubular steel being banged around and other sounds associated with one of the busiest off-road cottage industry shops in northern Wisconsin, Greaves took a few minutes to re-live Crandon’s epic, record-setting race weekend.

Monster Energy: Right out of the gate, Johnny, open up on Crandon this year. Not only did you break the track record, but so did Rick Johnson – who was chasing you. That and Bryce Menzies and Rob MacCachren in PRO 2 smashed that record as well. Why was it so insanely fast at Crandon?

Johnny Greaves: You know, I don’t know, actually. I was thinking about that on the way home. Last year at the fall Crandon event I thought the corners were faster, but we probably didn’t have the amount of grip on the straightaways that we had this past weekend. Last year you could throw it up into the berms really hard, square it off. This year you couldn’t really do that. You kinda were real timid to do that, so I stayed low the whole time. But man, when you hooked that low line it was hooked hard and you got a good shot out of there – low or high. So definitely there seemed to be really good grip on the track. I think that was the first time – ever – that I’ve raced at Crandon where they didn’t water the track at all before a race. I think maybe the moisture (already present) had something to do with it. It’s been pretty wet here the past couple months.

It also had something to do with those Maxxis tires (Razor project tire). That was the first time we’ve been on that track with those tires and I was impressed. I mean we could put that thing anywhere we wanted to go and it was hooking up hard.

Note: In addition to all the recent wet weather in the region, track operations officials with Crandon hosed the track down with a local paper mill byproduct solution devised to hold moisture in and keep the dust down on the track. It’s the same organic solution used for a similar purpose on logging roads in this region of the United States. Stuff’s got a curious smell – some at the race say it smelled like “pickle juice.” 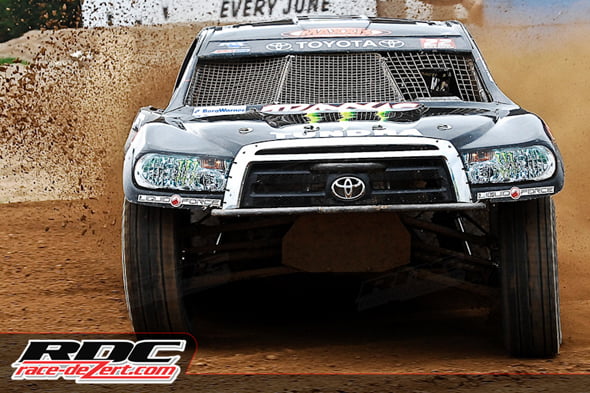 Monster Energy: For about three-quarters of the race you battled hard with RJ, and early on with Adrian Cenni. Did your fellow TORC competition help push you to that new lap record, or were you just set on going as fast as you possibly could from the beginning?

Johnny Greaves: I knew Ricky was going to be fast. He’d been testing there and has been around that track as much as I have this year. At the drop of the green I tried to nudge my way past him and Adrian right off the bat. Ended up making one mistake in the gravel pit and let Adrian by, but went back after him right away, saying to myself ‘I’m not going to let either one of these guys settle into a lead. Force my way into it, set the pace and it worked out well. Ricky kept me honest, kept pushing. Then towards the end of the race I settled into a pace where he wasn’t catching me, but I wasn’t losing him either. I think we were both on edge at the beginning of the race – at that pace – and that’s where the record was broke (by both drivers).

Monster Energy: What were your thoughts when your crew told you that you’d broke the Crandon lap record?

Johnny Greaves: Man, when we got done and saw that it was a new record – by a half second – I was definitely excited about that. Rick (Huseman) was the first text I sent out. I told him we won and said ‘Sorry, buddy, we had to smash your record.’ He was impressed and sent back a big ol’  “WOW.” And if Rick was here he’d have made us step it up even a little bit faster even. He’s a pretty aggressive guy out there too.

Monster Energy: Rewind a few weeks back to RedBud MX and the Traxxas TORC Series opener. You got off to a rough start at RedBud – literally getting stuck in the mud. Pretty sure they snapped a 32,000-pound test tow strap trying to pull you out. Has anything like that ever happened to you in your short course racing career?

Johnny Greaves: Oh yeah. I’ve been around this a long time and there’s been many a time where we’ve raced in some deep mud. You make a stupid mistake and find yourself stuck in a pile of mud or up in a berm – wherever it may be. You’re always at the mercy of the track. It’s just one of those things that you get with this sport. You have great days and you have not-so-great days. Overall I was just happy to get back out on the track and finish where I did, salvage some points. I knew once we got on our home turf at Crandon we were going to make up some points. Lead at the yellow and make sure to win the race. That got us maximum points and we’re only one point out from being nine back when went in.

Monster Energy: Over the course of time do you think RedBud will be a pretty good facility for the Traxxas TORC Series?

Johnny Greaves: Yeah. It was the first shot at it and I’m excited to see them get a fair shot at it – with better weather and now knowing what they’re dealing with. They’ve had the chance to see our trucks run and Tim (RedBud’s Tim Ritchie) understands what he needs for a little more area. The beauty of RedBud is you’ll never find a track that has that type of elevation change, mixed in motocross jumps and be at that type of facility that has that allure of the whole motocross nationals and everything else. It’s a good fit, we’ve just got to figure out how to make it work. 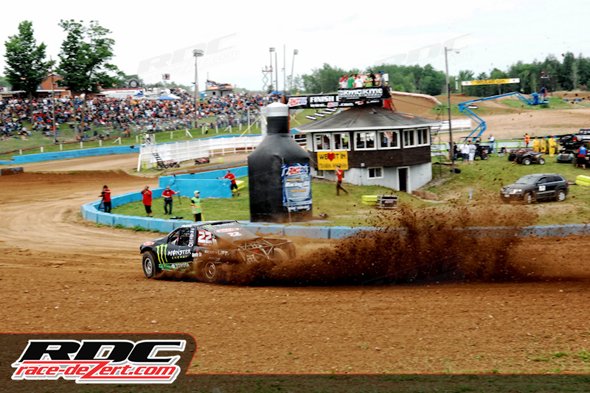 Monster Energy: Back to Crandon, there were all kinds of Monster Energy/Johnny Greaves T-shirts and hats on kids running around the pits. Is this probably the best race for you to do well at considering you’re from about an hour away?

Johnny Greaves: We’re very fortunate that we get so many fans both at Crandon and Bark River (Mich.) that come just to see my team, along with Marty (Hart) and CJ (Greaves). It’s pretty cool to walk around the pits and if it’s not a Johnny Greaves shirt it’s a CJ Greaves shirt. So we’re building that legacy as we go. It’s such a loyal fan base … I stay there until the last person gets a signature or whatever the need, try and not walk away crabby.

Monster Energy: Do you get a similar reception when you race out in California, or are you considered more of a villain out there?

Johnny Greaves: No, not really. I think with out there it’s a little different crowd, they’re kind of into their west coast guys – 909ers following the Mulisha. But I’ve definitely got a bunch of fans out there as well that all seem to like it when we show up. And since we’re not committed to that series it helps rolling as one of the top Monster guys. The fans gotta love you then!

Monster Energy: How cool is that having your son, CJ, racing the same series as you?

Johnny Greaves: Oh that’s awesome. I’m so pumped that we can bring him along as we go through all this, experience it all and learn. Kind of the same way it worked with me. I got to grow with the series and learned and we went along. He’s catching on so quick. I think it was all those years when I thought he was just a kid playing in the grandstands that he was really paying attention. He’s never done any sort of four wheel racing, go-karts or any of that stuff. He’s only been a motocrosser and last year was his first time ever in any sort of four wheel racing – in his buggy. So he got it figured out pretty quick. Obviously motocross is huge in this sport. Any motocrossers are successful in it. And CJ didn’t even have his driver’s license until a month ago! (laughter) 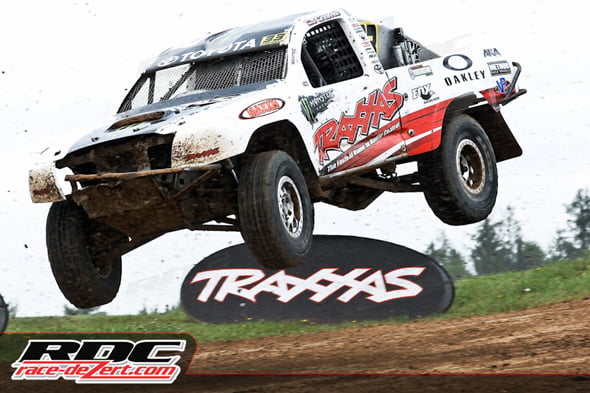 Monster Energy: Does it get nerve-wracking watching him, then having to go race yourself. Or does the fact that he’s killing it fire you up to race even more?

Johnny Greaves: The only thing that bugs me is that I can’t have more time preparing for his race, during his race and being with him on the starting line. I gotta make sure Marty’s ready, get myself ready and have everything else organize.

Monster Energy: Dealing with all that – and then you get the massive PRO Light pile up at Crandon, which collected CJ.

Johnny Greaves: That was pretty wild. It’s unfortunate that it had to happen, but I’d told him that we’re all going to do it one day – and he got his the first day, first time ever. I was running around with my head cut off trying to orchestrate getting him back on the track. And it did leave me a little worked up when I was heading for the line. But in the end it all turned out real well.

D
Kilian Hamlin
Rick will be at fall Crandon to see if he can get that record back!