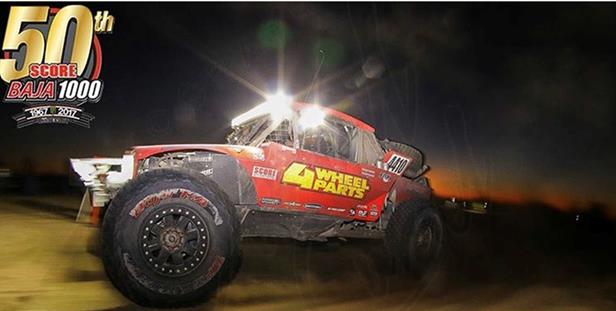 Compton, California (November 21, 2017) – Greg Adler and Team 4 Wheel Parts battled for more than 31 hours across 1,134.4 miles of Baja California’s harshest terrain to a podium finish in the 50th anniversary of the Baja 1000 this past weekend. The feat put the exclamation point on Adler’s monumental off-road racing season that included completing the brutal King of the Hammers and seizing a class victory in the famed Mint 400 off-road race.

Starting on Thursday, November 16, Adler took off from the starting line in his race-proven Ultra4 Kirby-built machine and despite momentary setbacks that parked the #10 for over four and a half hours for repairs throughout the race, Adler and his fellow drivers, Brian Kirby and Jason Scherer were able to persevere to collect third place in the hotly contested class with an official finishing time of 31:17:01.

“We were running hard for the first 200 miles or so with our only major challenge being a starter issue that held us up for about a half hour at our scheduled stop in San Felipe and then we were off again,” said Adler. “As the sun was setting and the dust hanging in the air, attrition was starting to take its toll on the entire field. By the time we got to our fourth scheduled pit stop we were in pretty rough shape. We had lost a control arm, the transfer case was shot and we broke a CV. That’s when the team really came together and they were determined to get us up and running – whatever it took!”

With the clock ticking and competitors passing by as they worked, Team 4 Wheel Parts dedicated crew of mechanics made the necessary repairs to put the #10 back on the road and into the thick of the chase for the podium.

Now, as the race developed, it was up to Kirby and Scherer to battle the elements – heavy fog, seemingly endless miles of deep silt, and the oppressive Baja heat along some of the most vicious sections of the course as they raced down the Baja peninsula.

“Kirby built the car and knows it inside and out,” said Adler. “With his co-driver, Dylan Cochran, navigating for him from the right seat and then handing the car off to King of the Hammers champion, Jason Scherer and his co-driver Adam McGough, we knew we were in good hands all the way to the finish line.”

Just after 7:30 p.m. local time, Scherer crossed the finish line, to a rousing celebration that included Adler with his family and friends, along with the entire crew who began the epic quest in Ensenada and supported his effort the entire distance of the race.

“It was an incredible feeling to be standing at the finish in La Paz with my family including my brother, Kevin, who managed the logistic and planning throughout this monumental effort, along with the team who had worked tirelessly to get us there,” said Adler. “Earlier in the year, we completed the King of the Hammers, took the class win at the Mint 400 and now have collected a podium spot in the 50thrunning of the Baja 1000. It doesn’t get much better than that!”