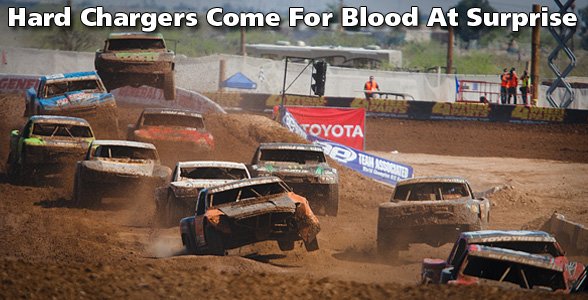 Racers made their way to the Speedworld Motorsports Park in Surprise Arizona for Round 6 of the Lucas Oil Off Road Racing Series where the temperature and the intensity were at the highest that we have seen all season long.

All eyes were on Monster Energy Pro 4 Unlimited driver; Kyle LeDuc as the Pro 4 Unlimited’s were the first to take the center stage. LeDuc found himself starting in an unfamiliar place for the first time this season; in the back of the pack. Due to schedule conflicts, racers were told there would be no qualifying for Round 6 of the Lucas Oil Off Road Racing Series, forcing LeDuc into a pressure situation. With Greg Adler and Todd LeDuc hungry for a win in the Pro 4 Unlimited category, Kyle LeDuc (younger brother to Todd LeDuc) knew he had to work hard in order to keep his wining streak alive.

Without surprise, mayhem ensued in the Pro 4 Unlimited race. While chasing down the leaders, the pace proved to be too much for MavTv driver; Josh Merrell. Merrell’s truck took a nasty barrel roll after making contact with a K-rail through the mogul section down the front stretch. With Eric Barron, Todd LeDuc, Corry Weller and Curt LeDuc all out of the race with mechanical issues, it was Kyle LeDuc’s race to loose. Hoping for no mechanical failures, Kyle LeDuc backed the pace down to save his equipment in order to make sure he saw the checkered flag.

With nearly a half of a lap lead, Kyle LeDuc crossed the finish line in first place, leaving Pro Comp driver Travis Coyne and E3 Spark Plugs driver Jerry Daugherty left to battle to the finish. Coyne would fight his way to the second place position and Daugherty would find himself on the podium for the first time in over two years. This makes it the sixth consecutive win for Kyle LeDuc. Can anybody stop Kyle LeDuc in round seven?

Pro Am Monster Energy Pro Lite Unlimited driver Shanon Campbell found himself leading the pack of angry Pro Lites to the green flag in Round 6. This was Campbell’s first time holding the pole position in 2012. Despite Campbell’s disappointing finish in Round 5, Campbell and crew kept their head up and threw up the hail-marry for Round 6 of the Lucas Oil Off Road Racing Series. Hot on his tail were six of the fastest past UTV racers that our sport has ever seen, one of them being the leading points holder; RJ Anderson. When the green flag dropped, nobody was holding back. “I knew I had to charge to the front as soon as possible. There are a lot of fast guys in this class, and they can all win at anytime.” Stated Austin Kimbrell (former UTV racer), who started in the second row behind Campbell. In a matter of two laps, Kimbrell found his way to the front of the pack and took advantage of the clean air. Kimbrell had a five car-length lead over the second place position for nearly five laps until a full course caution forced Kimbrell to take form back with the rest of the Pro Lite Unlimited’s. With the full course caution throwing Kimbrell off on his pace, Kimbrell found himself catching a rut going into turn four as he exited the moguls, causing Kimbrell to flip onto his roof and allowing room for RJ Anderson to take the lead. It was no looking back for the young RJ Anderson from that point on. While Anderson was busy trying to stay focused on keeping the lead, a battle between Bradley Morris, Casey Currie and Ryan Beat was just heating up behind him. The trio would battle lap for lap and change positions a half a dozen times before the checkered flag would drop. On the last lap coming into the finish line, Monster Energy driver Casey Currie would move his way into the second place position while Bradley Morris would round out the top three leaving Ryan Beat limping behind with mechanical issues. This win would give RJ Anderson valuable points in the overall points standings and would retain his lead as the chase for the championship heats up.

If anybody had any doubts or thought that the Pro 2 Unlimited race was going to be uneventful, they were highly mistaken. Round 6 ended the weekend with an exclamation point and one of the best Pro 2 Unlimited races that we have seen all season long.

After a horrific crash in Round 5, Jeremy McGrath and the Stronghold Motorsports crew were able to get the #2 Monster Energy Pro 2 Unlimited back together and race ready for Round 6. McGrath started nearly dead last in a field of eighteen Pro 2 Unlimited’s.

Leading the Pro 2 Unlimited field to the green flag was the General of the Metal Militia; Brian Deegan. When the green flag dropped, Deegan found himself being hunted by ReadyLift driver Marty Hart and previous Pro 2 Unlimited champ Carl Renezeter. Deegan tried to do all that he could to keep the field from getting past him. In his newly rebuilt truck, Jeremy McGrath was able to find his way into the top five along with Renezeter, Deegan, and Hart just as a full course caution was thrown. The full course caution sent Slick Mist driver Robby Woods to the hot pits where he would later spend the rest of the race. When racing resumed, it was a mad dash to the first turn. Deegan and Renezeter would soon find themselves in a two-way battle for the lead that would result in the duo getting tangled together as they exited the mogul section leading into turn four. Marty Hart would take over the lead with McGrath not far behind.

Putting down the fastest lap of the race, Marty Hart would hold the first place position for the remainder of the race and would walk away with his 3rd first place finish in the 2012 season. Rob MacCachren and Greg Adler rounded out the podium, shaking the point’s standings up once again.

Nobody is quite sure what Adler has up his sleeve, but whatever it is, it’s working. Adler has been on a hot streak in both the Pro 2 Unlimited and the Pro 4 Unlimited. We’ll see if his hot streak can continue as the Lucas Oil Off Road Racing Series heads to Miller Motorsports Park on June 23rd and 24th in Salt Lake City, Utah.

Will Adler be the one to take down Kyle LeDuc? We shall see if Adler has what it takes.

Jason Zindroski
thanks race-dezert for all the awsome racing updates, keep us canadians up north in the loop! Kyle's the man!