HDRA heads to Primm Nevada for round 4 of the 5 race series.  Running strong with a can do attitude, Roger Norman and HDRA brought the big course back to Primm after many said it could never be done again.

“I’m jealous of my racers this time, I wish I could be out there running this course!” Said Robert Gross, race director at HDRA. “The recent rains and the fact that it hasn’t been run in some time really smoothed it out and made this a really fast course.”

For the first three laps it would be a tight battle between Flores and Mitchell, trading the lead several times. Flores would finally catch a break on lap 3 when Mitchell hit a rock and got a left front flat. “We were battling there for awhile and I hit a damn rock.” Said Mitchell. “My fault, otherwise we had a perfect day. We were both running pretty hard.”

Not only did TJ win the overall it was his debut into the trophy truck ranks. “I’d been in the truck a few times but here is where I really got to feel what it was like to push it hard.” Said Flores. “Mitchell was giving us a run and I had to push out of my comfort zone and step it up. It’s a lot different than the buggy; it doesn’t beat you up. But there’s a lot more weight to throw around and that takes some getting use to.” “Give me a few more days like this and I’ll be on pace with the fast guys out there.” 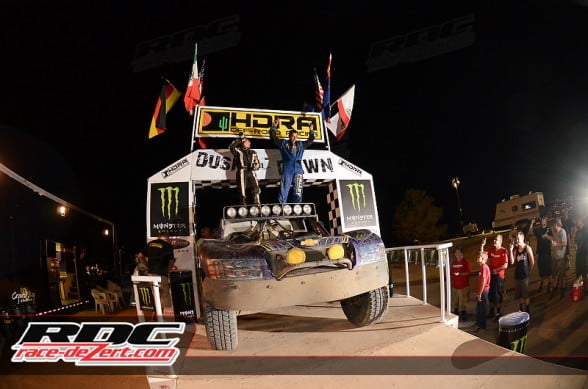 Brandon Arthur continued his winning ways taking the 1400 class win and further stretching his lead in the points. “We had a good race.” Said Arthur. “We just took our time and kept an even pace, the truck ran great.” “We got the championship wrapped up with this win and we’ll be debuting our new Trophy Truck in Laughlin!” “I just want to thank my family and especially my Dad for everything they do for me, I couldn’t do any of this without them.”

Josh Quintero also continued his win streak in class 7200 with his third straight. “We did some work on our shock package and it really helped a ton, we were doing 80 through the whoops.” Said Quintero. “We’ve had some great luck here at HDRA.”

Despite a lower than expected car count, those who did show up were treated with what made Primm a legendary challenging and fun course. “Races are getting harder to put on in the States.” Said Roger Norman. “But we’re are committed to bringing great races to the racers. They deserve it.”

The final stop of the year for HDRA will be Laughlin Nevada for two days of racing on a 17mile course. And yes, they will be crossing the Needles Hwy.

Of course RDC will be there.

Words and photos by Art Eugenio