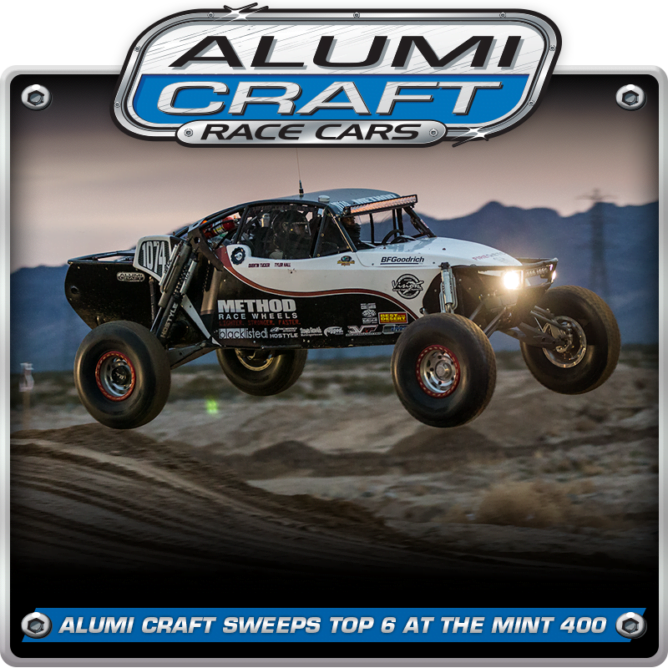 It was impressive when Alumi Craft racers took 7 of the top ten spots at the first race of the season in the Best In The Desert series; the Parker 425. At The Mint 400, the bar was raised again to even greater heights. Alumi Craft class 10 racers took the top 6 spots in the race for an unprecedented sweep. 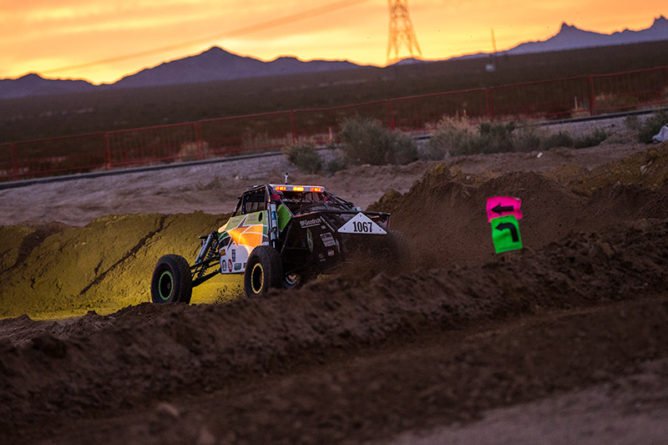 It was not an easy race; far from it. The course was more challenging than last year’s due to Mother Nature. Abundant rains had washed away the soil that fills in the gaps between rocks; so much of the 110 mile long course was in fact, a pile of rocks. In other places, deep sand had formed into huge whoops that pounded the car’s suspensions. 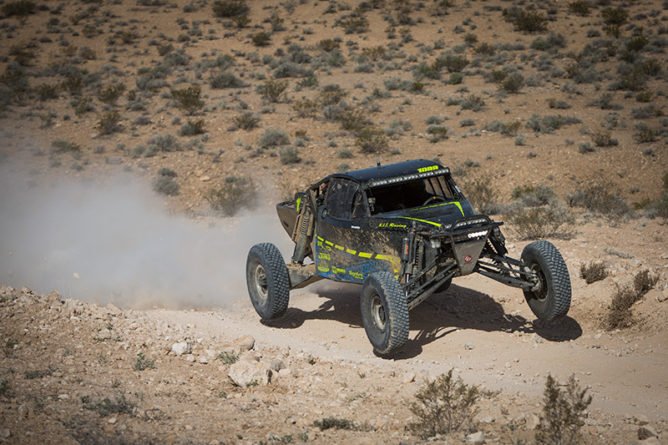 The lead was swapped back and forth over the three laps run with Brock Heger and Eric Dollente coming out on top. It was the team’s and Heger’s third race ever in the desert. So far, Heger’s record stands at 3 races, 3 wins. Second place went to TJ Tuls, and rounding out the podium was Chase Warren in 3rd. The balance of the Alumi Craft train at the front consisted of Adam Pfankuch in 4th, Keith Waibel 5th, and Roger Starkey Jr. in 6th. 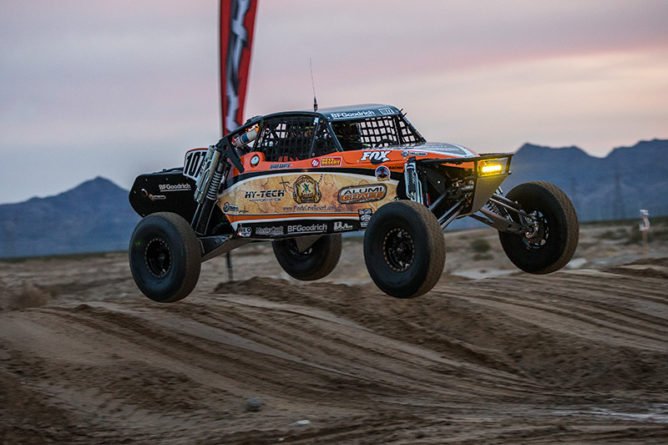 “It was my first Mint 400 race,” said Heger, “We started on the pole and I was out in front. I was not sure what type of pace to run so I backed it down a bit and found out when I got passed. We got a flat in some rocks and tried to drive on it to the pits but had to stop and change it. After pitting at mile 20 for lap 2, I ran at 110% and took the lead back at mile 80. 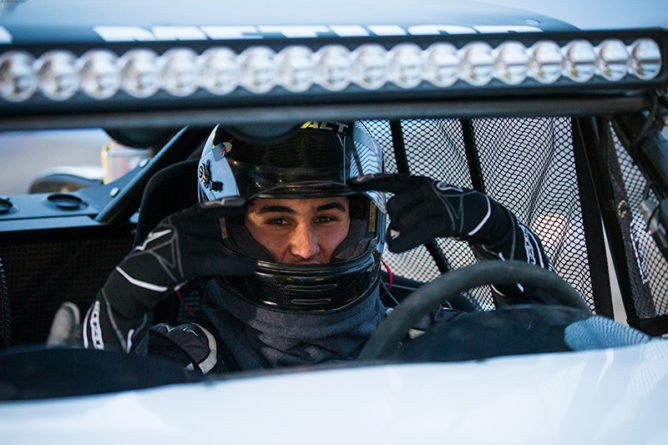 I wanted to build a gap so we would have time to stop and get Eric in the car on lap 3. He kept it on all 4 and brought it home for the win. He always tells me to stay in the car but I want him to take it to the finish and share the glory. We are stoked on our results but we are changing strategy. 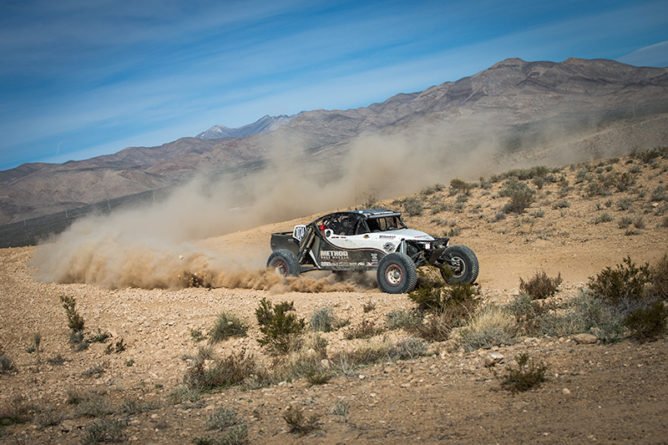 We have been going all out for wins but with the points lead we have, we are looking at a championship run. We will be playing it smart and racing towards that championship. We will still be pushing the pace up high but will not risk a DNF (did not finish). The competition in BITD is on such a high level it would be amazing to win a championship in our first season.” 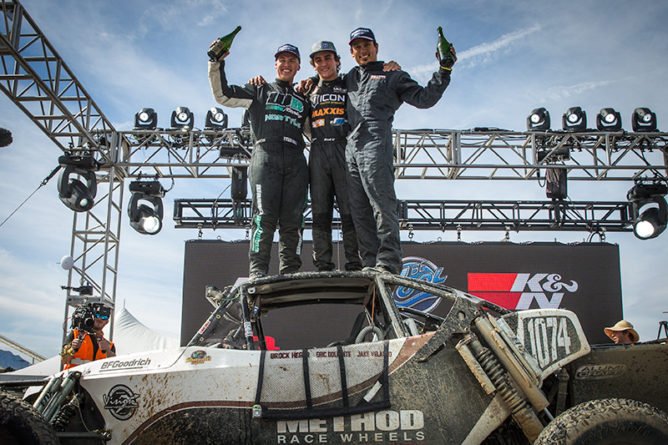 Second place TJ Tuls started the race behind the 8 ball. He made changes to the suspension before the race that he hoped would make the car faster. Once underway, it became apparent that they went the wrong way. He had to stop and make adjustments in the pits. “We made adjustments on the fly at pit B and in the main pits before lap 2. On the second lap, we pushed hard to make up time and get back to the lead pack. There were a lot of rocks in the middle of the course. We tried to mark the biggest ones on the GPS. We planned to run hard on the last lap, and it payed off with no flat tires. My co-driver Josh Montoya did a great job navigating and keeping me in check on lap one when the suspension was not working how I wanted. We had fun; it was a good course; I really like it. We need to replace the skid plate, it was hammered from hitting so many rocks, but the car is still in perfect shape. Alumi Craft builds an amazing car and sweeping the top 6 is awesome. We were not sure if we could run the whole Best in the Desert season but after two podiums in a row we want to run towards the championship.” 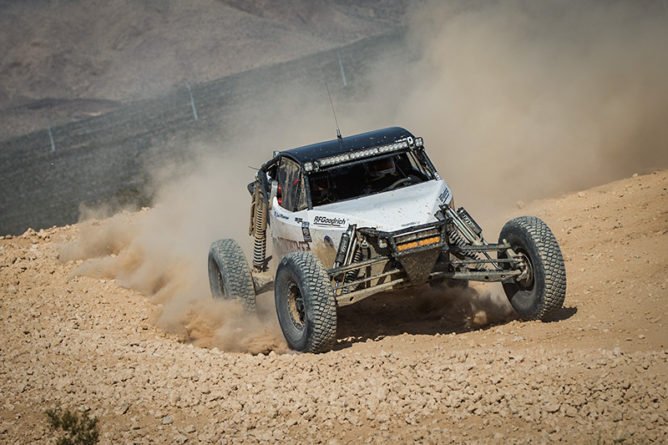 Third place Chase Warren had to overcome a rollover to get to the podium.  While passing a sportsman class truck, the truck turned into them, sending the car into a barrel roll. Luckily they landed back on the wheels. “We did four rolls but some of them were in the air,” said Warren, “We had damage to the wheels on the car and it peeled up the side of the roof, but the antennae on top was not even bent. We had to stop and change tires because the wheels were leaking air. We had a great start and were running in the lead after 40 miles on lap one. We were getting reeled back in on the faster sections; we don’t have the same engine power that others do. The course was rocky but our Alumi Craft was working flawlessly. After the roll we kept losing air pressure in the tires and had to run the last 5 miles to the finish with a flat. It was an up and down day but we are so happy to get back on the podium.” 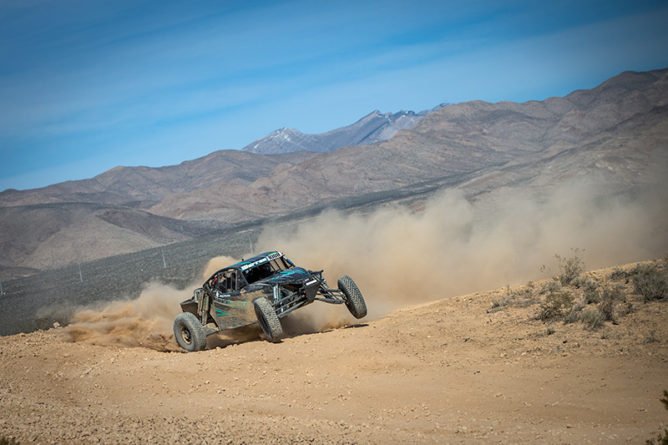 Alumi Craft’s success comes from continuously applying the latest technology into everything they build. They are constantly testing and tuning and most importantly, they listen to feedback from their customers. Alumi Craft has a long winning record in competition but they also build the most reliable and best performing pre-runners, and sand cars available. Regardless if you are doing course reconnaissance, racing for a trophy, or just having a blast with your friends, Alumi Craft is dedicated to providing you with a fun, safe and reliable vehicle that exceeds your expectations. If you demand the best, give Alumi Craft a call at 619-596-9841 or go to: http://alumicraft.info/ to find out more about our race products and services.

Bink Designs is a premier graphic design company located in San Diego, CA. Since 2003, Bink Designs has been committed to providing cost-effective solutions for clients’ high-end graphic needs. Bink Designs will work with you to develop a strategy that matches your goals. Bink Designs offers a number of services, including: Identity, Print Design, Vinyl Graphics, Web Design, Photography & Apparel.