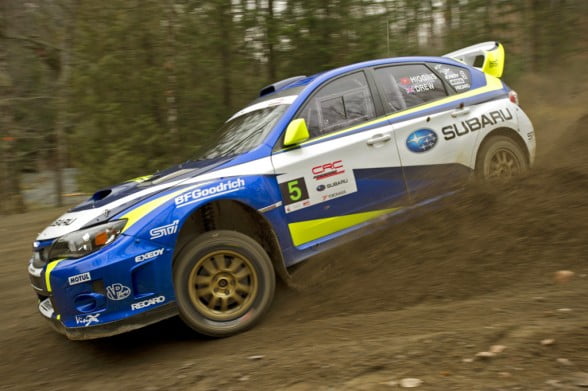 (Nov 28, 2011) Subaru Rally Team USA driver David Higgins has finished 2nd Overall at the hotly contested 2011 Rally of the Tall Pines in Bancroft, Ontario. Higgins and the Subaru Rally Team USA squad attended the Tall Pines Rally, the final round of the Canadian Rally Championship, to test various development components on their Vermont SportsCar-prepared 2011 Subaru Impreza STI rally car ahead of the 2012 Rally America National Championship.  For Higgins, the 2011 Rally America Champion, this was the first time attending the Tall Pines Rally and he notes it was one of the most challenging events of his career.

Based in Bancroft Ontario, two hours’ drive from Toronto; the Rally of the Tall Pines is one of the most difficult rallies in Canada due to the mix of high level competition and challenging roads.  The event also features a daunting 126 miles of competition stages run in just one long day, taxing both the crews and the cars.   This challenge presented an ideal test session for Subaru Rally Team USA outside the pressures of the Rally America National Championship.  Subaru Rally Team USA brought the latest evolution of their 2011 Subaru WRX STI rally car which included new suspension upgrades that the team sought to test.

“This rally was one of the most difficult of my career, the roads are so challenging and there is a big variety in surface grip and conditions. There are jumps, off camber turns, blind crests everywhere and rough spots,” explained Higgins.  “It really made for an ideal test for the car and I think we learned more about the car at this rally than we have at the previous four events we’ve run with it.” 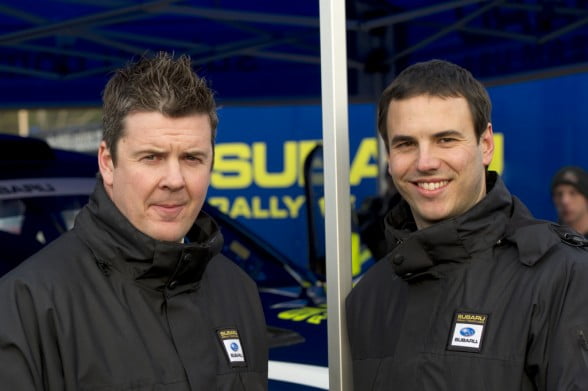 Higgins and his co-driver Craig Drew began the rally with a conservative pace as they experimented with car setup as part of the test and sat in 3rd place overall early in the event. The duo hit some trouble near the midpoint of the rally when their car was slowed by a tire puncture in-stage and then on a subsequent stage were forced to stop within the stage and change another tire puncture. Higgins lost nearly three minutes to the rally leader in the process.

However, Higgins’ top two rivals, current Canadian champion Antoine L’Estage and former Canadian champion Pat Richard were befallen by mechanical problems near the midpoint as well leaving Higgins comfortably in 2nd place overall for the remainder of the event. Higgins went on to win the final seven stages of the rally and at the finish had closed the nearly three-minute gap to the leader down to just over thirty seconds.

“David and Craig drove perfectly to plan as our intention from the beginning was to approach this event as a valuable opportunity testing different components and adjusting car set-ups in advance of our 2012 race campaign,” indicated James Han, motorsports marketing manager for Subaru of America, Inc.  “The talent within the field was strong, and our team performed well…finishing credibly against drivers with many years of experience at [the Rally of] Tall Pines.”
Subaru Rally Team USA is proudly supported by Subaru of America, Inc., Subaru Tecnica International (STI), Subaru Performance Tuning (SPT), BFGoodrich Tires, RECARO, Vision X, Alpinestars, Motul, Exedy, VP Fuels and Vermont SportsCar. For more information on Subaru Rally Team USA, as well as exclusive photo and video galleries visit subaru.com/rally and for the latest news follow the team on Twitter: twitter.com/srtusa.