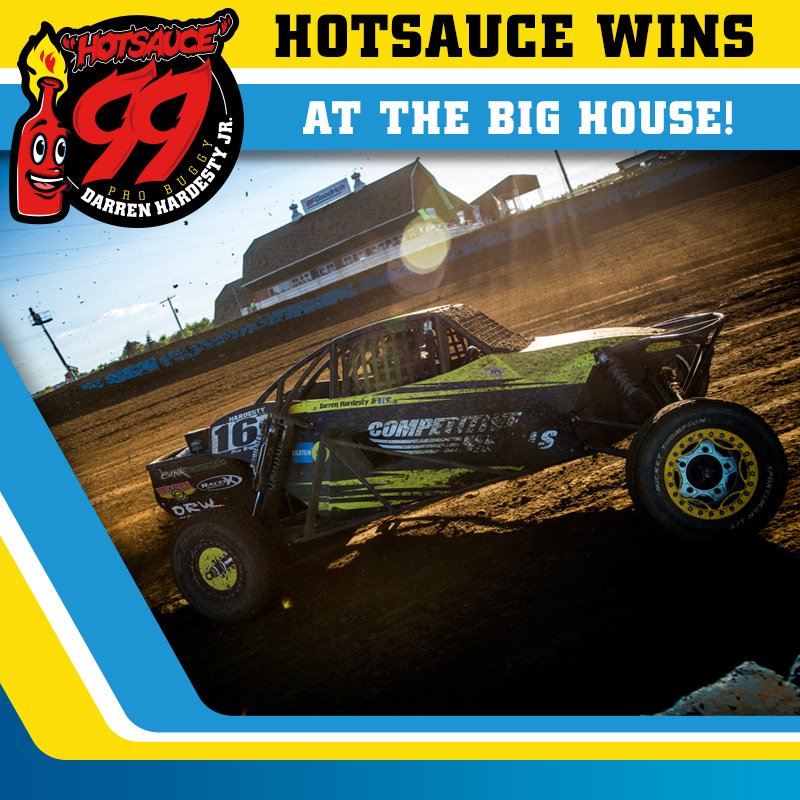 Crandon, WI
With no goals other than a great time and a desire to win, Darren “HotSauce” Hardesty Jr. gave the Super Buggy field at the Keys to the Big House race in Crandon, Wisconsin a case of heartburn. He came halfway across the country and beat them at their own game. West coast tracks are generally tighter and more technical. Crandon is a big track with long straight-a-ways and sweeping corners. Most of the time, racers are at full throttle. One other major difference is the land rush start. Instead of starting two at a time in multiple rows, the cars are lined up side by side in a single row. The quickest, fastest, and bravest driver is usually the one who comes out with the lead. Crandon’s turn one is famous for its full commitment, and the crashes that result when someone gets it wrong. 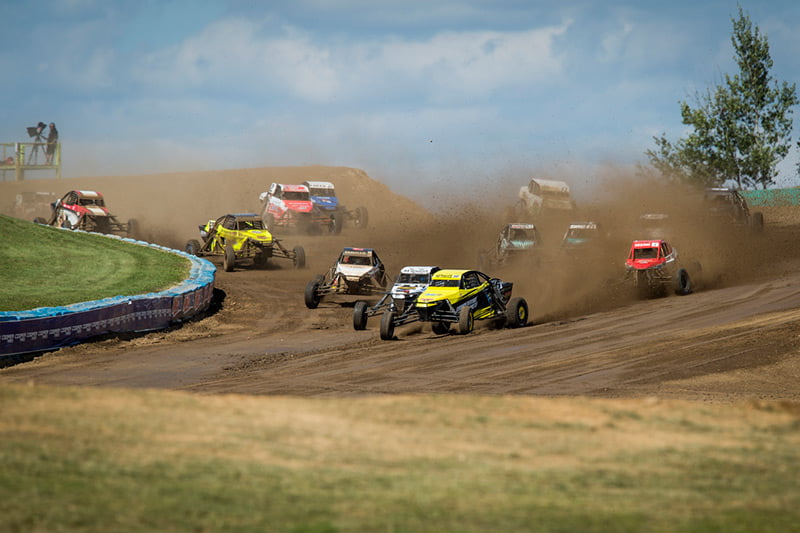 During Friday night’s, Forrest County Potawatomi “Night of Thunder” racing, HotSauce was slow off the line and suffered the roost created by a dozen angry Super Buggies scratching for traction in the Wisconsin mud. “I used 29 tear-offs,” said HotSauce, “They did not come off stuck together, I counted them. It was so muddy I could not see a thing. I wandered around not knowing where I was and what position I was in. At the finish they told me I was 5th!” 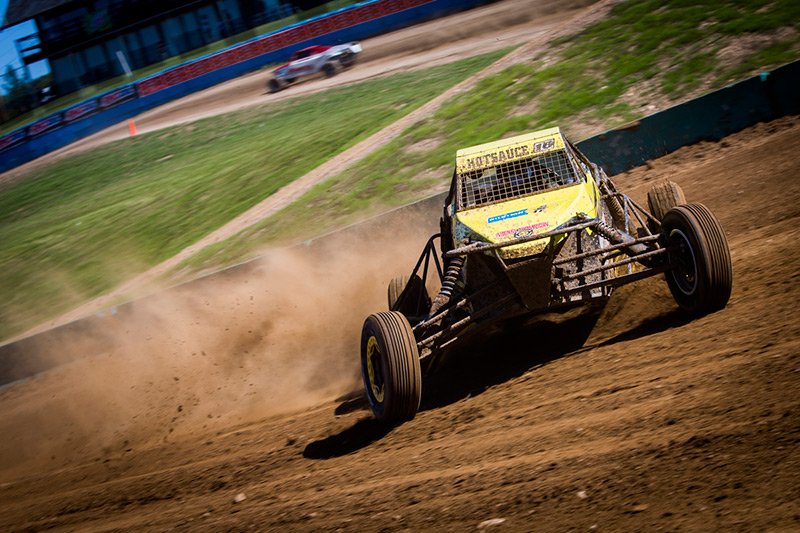 After the race, Darren talked with Mark Peterson of Mud Muncher. Mud Muncher makes a powered tear-off system that runs a continuous strip of plastic that is fed from a roll on one side of the unit. Just push a button and clean plastic is dispensed. During the race on Saturday, HotSauce put his new system to good use. “I held the button down through the first corner,” said Darren, “It was great, I could see!” After the first two corners, HotSauce would not need it. He passed three cars in turn one and two more off the first jump. From there he had clear sailing, all the way to the checkered flag. “My Competitive Metals, Bilstein, Off Road Warehouse, Mickey Thompson Tires, Bink Designs, Impact, Lucas Oil Products, Alumi Craft Race Cars, Black Rhino, RacerX and USA Wheels Pro Buggy was incredible,” said HotSauce, “It was so fast and so hooked up.

I am so thankful that Competitive Metals made it possible for me and Brandon Arthur to come out here to Crandon. Brandon’s team hauled our car out in their trailer and shared their pit canopy with us.” Crandon draws thousands of fans to this race every year. If they did not know HotSauce before, they certainly know him now. 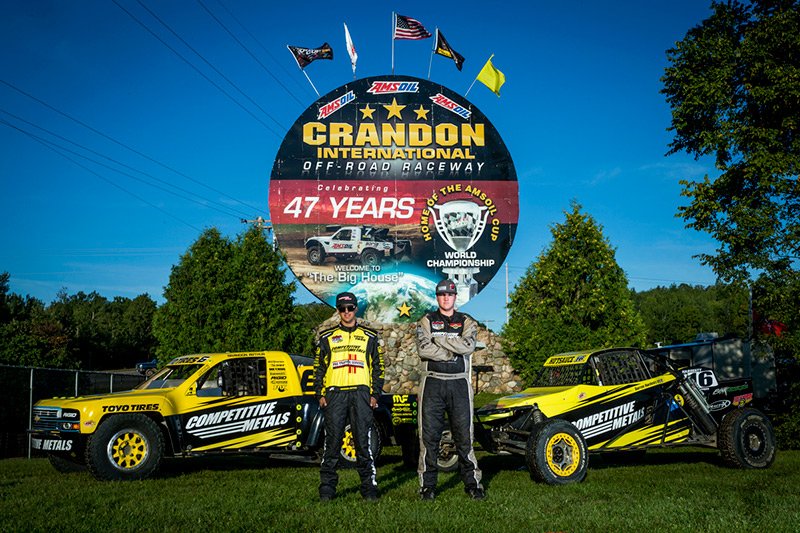 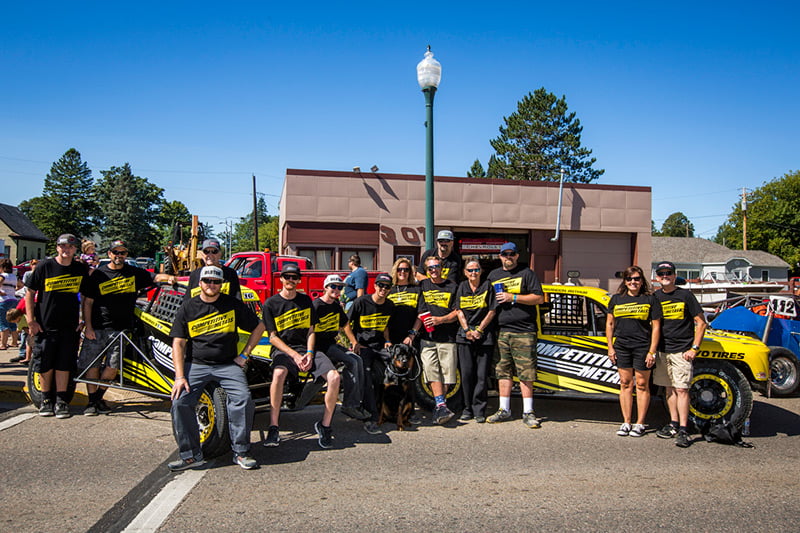 Sunday’s race was the Crandon World Championships and part of the Red Bull Signature Series. HotSauce qualified second fastest, and after an inversion started in the sixth spot from the inside. “I paid special attention to the flag man during this race,” said HotSauce, “I was happy with my starting position, I wanted to be a little farther towards the outside. When the green flag waived, I got a great jump and wound up with a holeshot.

I ran up front for most of the race but towards the end, the track started to dry out. My times were the same but the dry track allowed Garret George to get faster. In the last corner he stuck his nose in there and we got tangled up. He pushed me up the track and I hit a steel pole that holds up the finish line banner. It was a hard hit but I am ok, and we still crossed the line for a second place finish.” Darren’s crew will have the car repaired and back in it’s Bilstein livery in time for the next race in the Lucas Oil Off Road Racing Series, the “Fight Under the Lights” at Lake Elsinore Motorsports Park in Lake Elsinore, CA. on September 23 – 24. 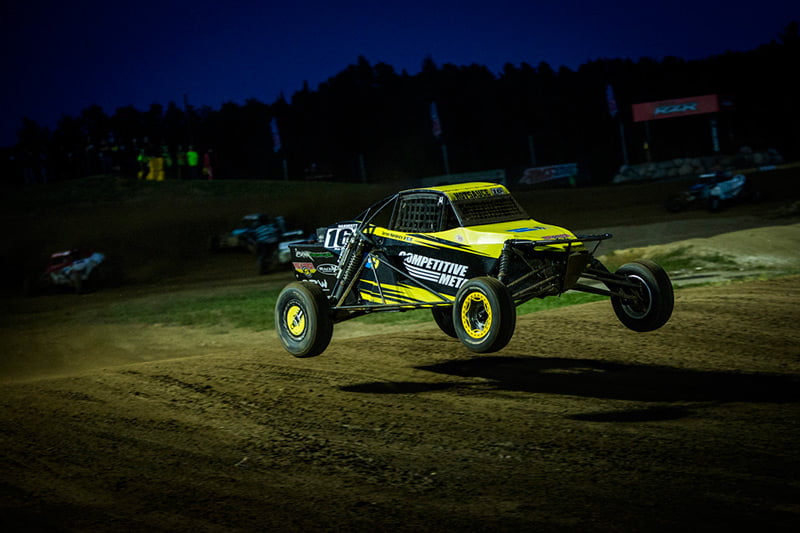 Come check out HotSauce racing in person or for the latest news and information about Darren “HotSauce” Hardesty Jr.’s racing go to: http://darrenhardestyjr.com/ where you will find fan information, race reports, photos, videos and much more. 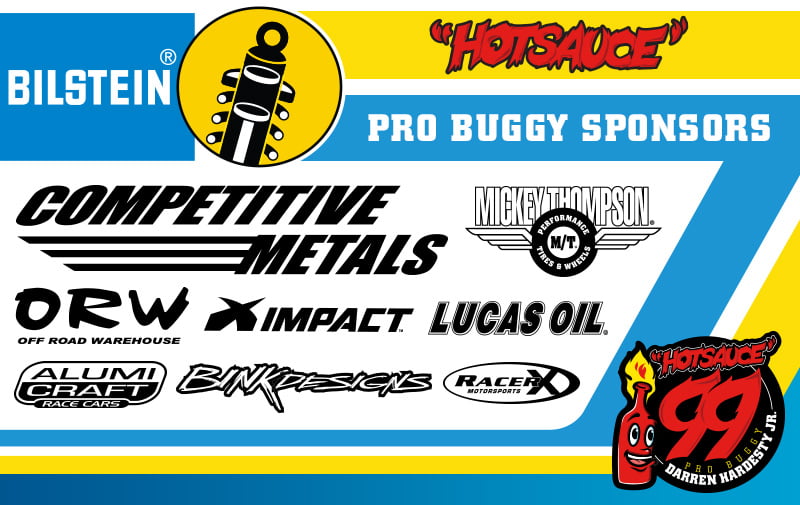 About Darren “HotSauce” Hardesty Jr.
Darren “HotSauce” Hardesty Jr. is a third generation racer who is making his own mark on off road racing. Darren’s Father, Darren Sr. and Grandfather Earl, have both won the most prestigious off-road races in the world and own Championships in the premier SCORE International Desert Racing series. The competitive streak runs deep in the Hardesty family. Darren Jr. shares the same drive; working his way up the ladder from Dwarf cars and JR1 Kart, where he was named “Rookie of the Year”, to JR2 and then the fastest kart class in the Lucas Oil Off Road Racing Series, Modified Kart. Originally slated to transition into the Pro Buggy class in 2015 by racing in the Lucas Oil Regional Series, he entered a pro level race, did extremely well and ran the rest of the Pro Buggy season in the professional series. He earned the rookie of the year title in both the Regional and Professional series’ in 2015. He became the youngest driver ever to win a professional class race with his victory in Tooele, Utah and won the regional series points championship. At only 15 years of age, Darren Jr. is an accomplished racer who has successfully applied the insight and knowledge instilled in him from his accomplished family. Put him in the driver’s seat and he is guaranteed to spice things up as his nickname “HotSauce” suggests.