As we take the first 4 stages of the DAKAR to let the general standings settle out, we see who’s been consistent. Marc Coma plays the tortoise in this fable, purposefully baiting the younger challenger but also making a navigation error on stage 3, yet nestled into a comfortable 12-minute stalking range of OA leader Joan Barreda. Of the top 25 riders, the Honda pilot’s lead over Coma is the widest of all. Yet 12 minutes is nothing down here.

Coma arrived in Copiapo, Chile 2 minutes slower than Barreda for stage 4 and the Catalan now sits within reasonable reach of “Bang Bang’s” fender. Let’s analyze this for a moment as we are now ¼-way through the Dakar Rally.

Coma is very smart and knows exactly what he’s doing by not leading the standings this early. More importantly, Coma believes Barreda will stumble. In fact, it’s almost a lock according to top pundits who side with Coma, that Barreda will falter (again) either through a crash or a navigation error. Betting on Barreda to hold or expand this lead through stage 10 is unrealistic in a race like this. Consider Coma’s position: He only needs Joan to make a 12 min mistake sometime in the next 11 days. Expect this to happen sooner than later. Coma showed today that he can stay within reach the 31 year old, keeping Bang-Bang on a short leash, not at all unlike last year. 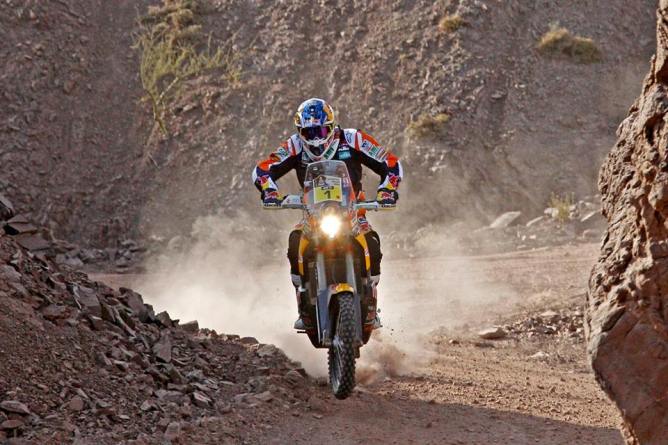 British favorite Sam Sunderland really screwed the pooch on his debut as an opener on stage 2 after winning his first. SunderSam lost over 2 hours getting lost as a leader, ditching his hopes for a podium and teaching an expensive lesson. The KTM Factory rider clawed back in stage 3 but stopped completely on stage 4 and is now out of the rally with a fractured collarbone. Who knows how this might affect his future at KTM?

You already wanted to have a frosty cold beer with Aussie rider Toby Price for his remarkable opening at the Dakar because Aussie’s are just plain brash and fun-loving. Price is expected to struggle as the rally progresses, which is only reflecting the lack of experience in FIM Rallies. In stage 4 that’s exactly what happened with his navigation struggles but kept himself in the top 10 with a 32 minute deficit behind Barreda. If the Aussie plays it smart, he can fend off attacks form the more experienced Faria, Rodrigues and Duclos. If he pushes too hard at this point, it will result in hours of lost time.

The charming Spaniard Laia Sanz finished the fourth stage as the 8th fastest pilot, propelling her to a 12th in the overall category. Don’t forget, Laia was a VIP guest at RDC’s Baja Beach Bash and was filmed spanking over 40 dudes to win the gnarliest hill climb. 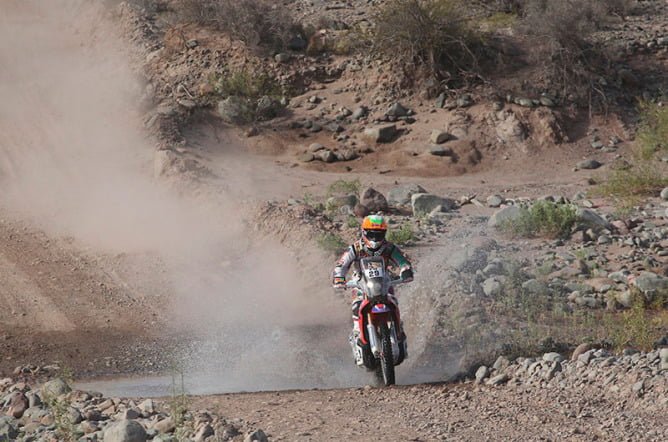 Calling the top 3 OA this early would be foolish but we have to look at the top 10 in a special light after 4 stages. 40 minutes separates 1st from 10th. There are only 2 ways to advance yourself at the Dakar Rally: you either advance yourself with results or you get advanced by the missteps of others. After 4 stages, the bottom half of the top 10 will need more of the latter than the former. Barreda’s pace is not sustainable at this rate vs. Coma. Something is going to happen and the question is not when but how big?

From this distance, we can see Viladoms or Quintanilla filling his spot on the podium. Either that or Barreda may very well be the next Coma.